My Dragon Con 2014 coverage starts winding down with my view on costumes this year. Don't worry, I've saved the best for last. I'll be wrapping it up with my Timothy Zahn interview tomorrow. 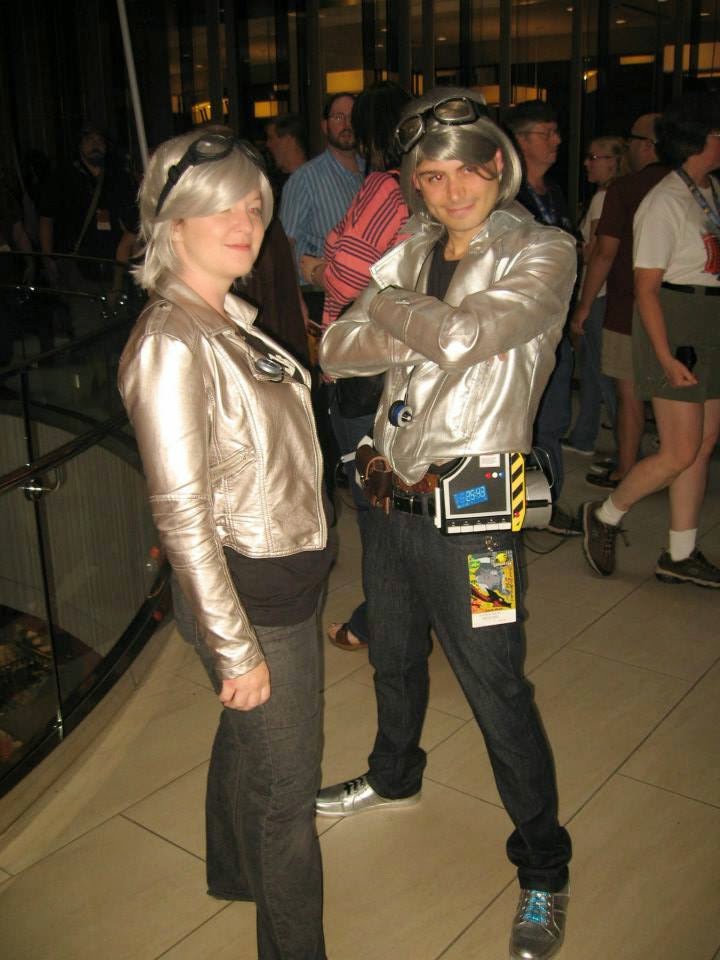 I'm not a costumer, but checking out everyone's costumes has always been one of my favorite parts of Dragon Con. I don't have a real camera, and my phone doesn't always get the best shots so I didn't get nearly as many pictures as I wanted. It was just too tough to pull my phone out of my bag, chaeck the lens for cleanliness, and try and get the setting right when you don't want to be the asshole who holds up traffic. Luckily Sharron Von Hoene and her camera were on hand, and did a great job getting lots of pictures that she has kindly allowed me to swipe. Lack of pictures aside I'm really envious of the great cosplayers and costume aficionados out there. I've always wanted to get into it myself, but I'm inherently lazy. Another part of the problem is that I can't think of anything truly unique to do. I don't want to be just another Lara Croft, Rogue, or (god forbid) Slave Leia. And to get truly unique you need to really put some thought and work into you costume. I would totally go as my character from Skyrim, Mass Effect, or any of the other games I have where I've got something so customized that there's no chance any one else will have anything like it. That is also going to require a place to put all your cool weapons and armor and junk when it gets to be too much. I refuse to get over my objection to shelling out hundreds of dollars for a hotel room in the city I live in, and if I can't change when needed I have a hard time committing to a costume for 12 or so hours a day. Let's face it I'm also just a little too out of shape to pull of a Slave Leia without upsetting the children. Until I get my ass back to the gym the best I could do would be a Mon Mothma mu mu, but maybe that's not such a bad idea. I am just too conscious (although accepting) of my body type and it's costuming limitations. I've always wanted to do a Psylocke since she's been one of my favorite X-Men for many years. But I don't have the skill to pull it off accurately, and there aren't enough Spanx and dance tights in the world to suck all my business in properly. This is a weekend about fantasy, and cellulite hanging out of an assless unitard is not part of any fantasy I have. But as usual, I digress.


Costumes this year ran the gamut from Business Deadpool to Pirate Deadpool every taste and style was covered. If I had a nickel for every Deadpool I saw this year I could sit at the slots in Vegas for years. I didn't manage to find out where all the Deadpools were meeting up, but I found this picture of a group from last year. Image the below picture times 10, and with many alternate goofy versions thrown in. 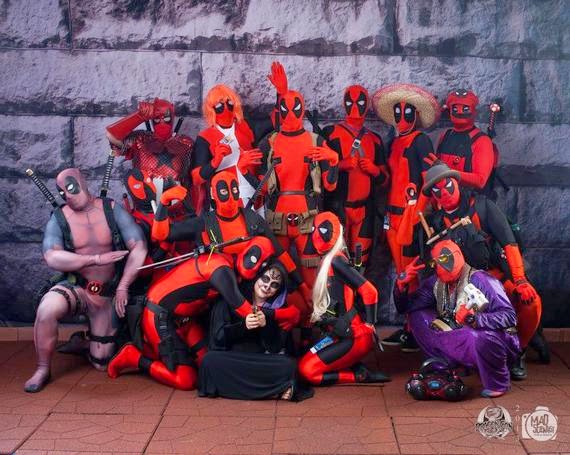 To quote Ryan Schweck (the most interesting man at Dragon Con. You wouldn't believe the crazy shit that happens to him. Just follow him around one night. I guarantee that you'll come away with a good story) “If all the people that wear Deadpool actually read Deadpool Marvel wouldn't have to publish anything else”. He makes a valid point. I personally love Deadpool, but it's hard to believe that so very many people are really that into him. Maybe it's true, but it's somehow a tough pill to swallow. And if all the Deadpools hooked up with all the Harley Quinns the world would be completely overrun with psychotic black and red babies. Sobering thought, huh? There were really plenty of other costumes out there, but I just got an overwhelmingly Deadpool-ish theme from the weekend. Anybody else want chimichangas right now?

I watch a lot of Face Off, and have even got into Heroes of Cosplay a little bit. I've always been interested in the fabrication and making of neat nerdy stuff (because really Face Off has become so much more about fabrication than it is about makeup). So this year I decided to check out the costume contest for the first time. It was kind of disappointing. It was hosted by Roy and R.J. From Face Off, and they are talented and funny guys (they were even dressed in costumes as each other), but they are maybe not the best hosts for this. It did seem kind of hastily thrown together though so that may not be entirely their fault. We were sitting too far back for any of us to get any good pictures, but there wasn't really much to take pictures of anyway. As pro-costumer Sara Pope put it “I think there should be seperate fabrication and sewing contests, because they are completely different skill sets and watching a contest with both competing is useless and impossible to compare. Also, "hipster" versions of costumes, for that matter, random "versions" of existing characters, people are terrified to just straight up design an original costume that isn't a funky twist on a pop icon. grow some balls costumers! also, the word cosplay....as a verb AND a noun....both make me want to vomit”. There was really maybe one costume that was in any way impressive, and even that one was more fabricated than sewn. Articulated wings are a great idea, but it's hard to put them against a girl who spent time sewing and crafting an original character costume. Needless to say the contest did not hold my interest for long so I went back to wandering feeling like I maybe should have stayed for DCW wrestling instead. Live and learn. 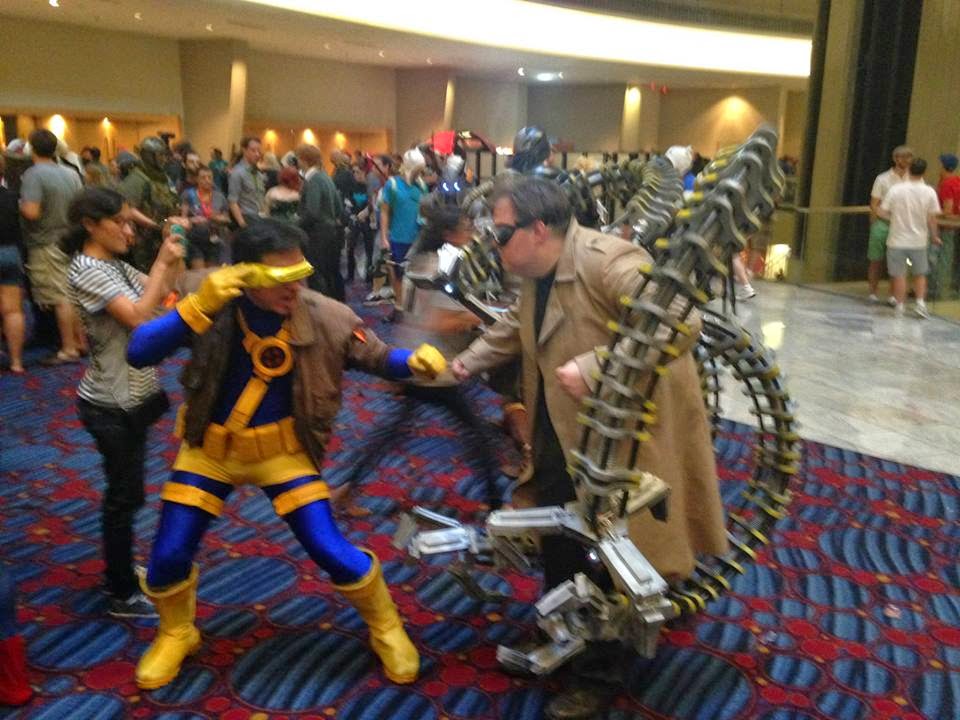 I saw way better costumes in my rambling than I did at the contest, and I have to say that I do feel kind of bad for the people who were standing in the hotel lobbies clearly looking for people to come by and take photos of them. They put time and effort into those things, and deserve a little recognition, but they might be more likely to get it if they didn't look so desperate for attention. My brief feeling of pity was quickly replaced by annoyance after continually getting stuck behind some jerk stopping to take a picture in the middle of a walkway. I also don't believe that every single person who wears a costume at Dragon Con is looking for attention. We almost lost Lori Lori Saturday night due to people constantly stopping her for a shot of her great Effie Trinket costume. She's too nice to say no, and I was too caught up in the press of the crowd to slip out and wait for her. Thank god there was enough phone reception to get a text through. Lori could have been lost to us forever, and that would indeed be sad.

Just like with everything else about Dragon Con the costuming gets bigger and better every year. One of these days I'll work up the energy to wear something besides nerdy t-shirts. Maybe I'll be one of those people doing a random made up version of a costume. Aging Out of Shape Lara Croft anyone?

What follows is a random gallery comprised of photos taken by both Sharron and myself. If anyone knows what this Legend Of Zelda gundam looking armor thing is please let me know. It's badass, but I just have no idea what it is. 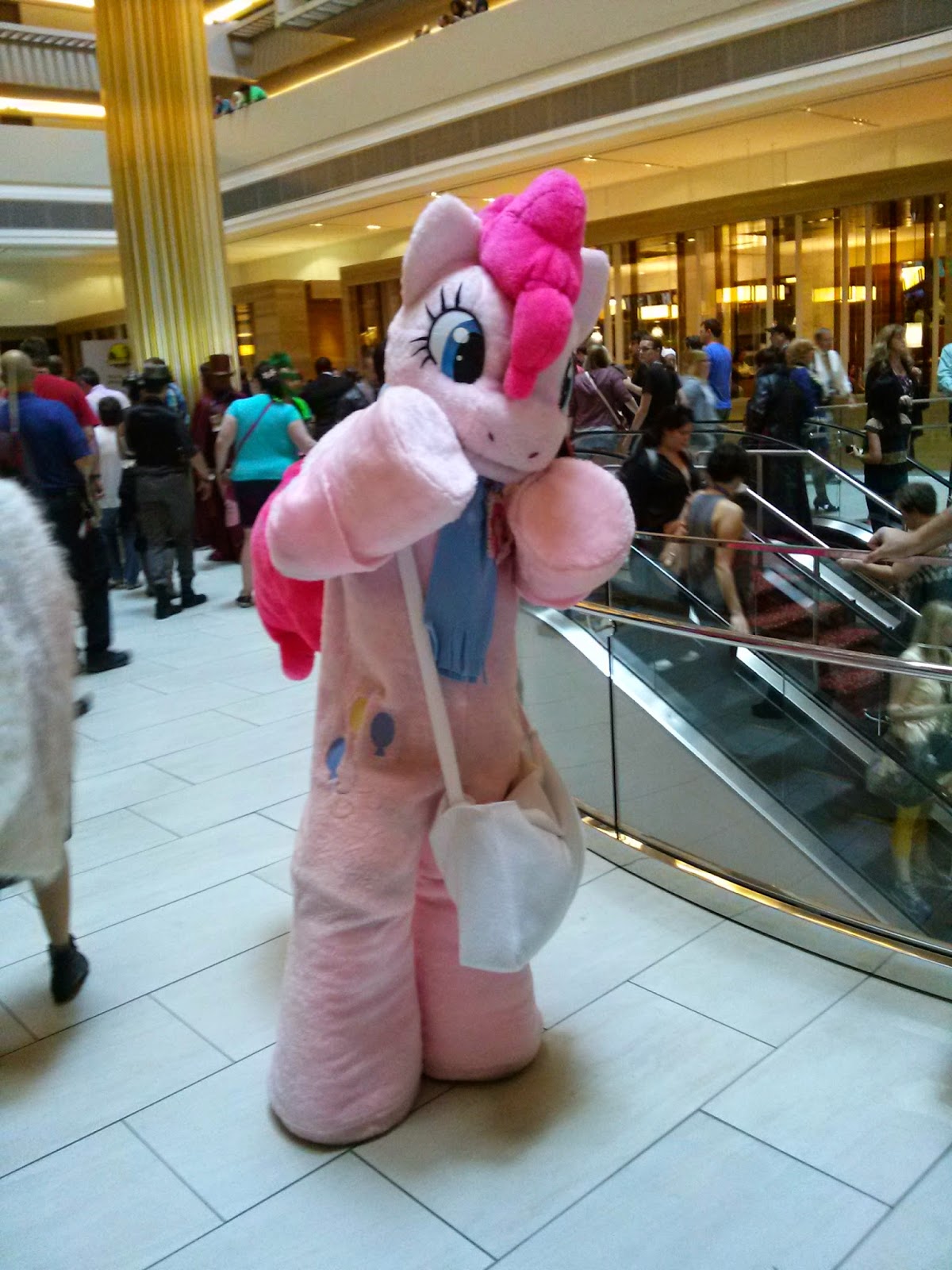 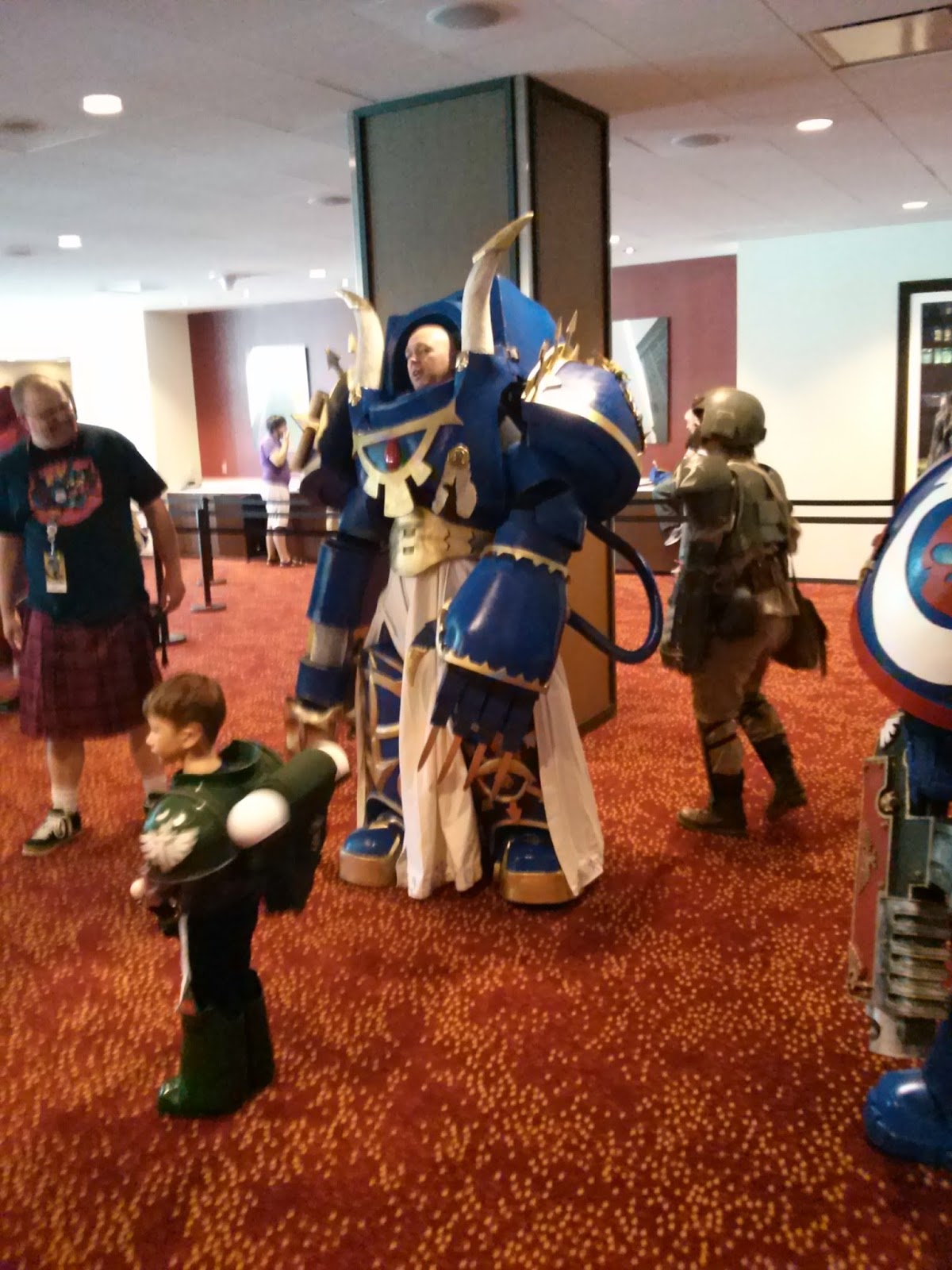 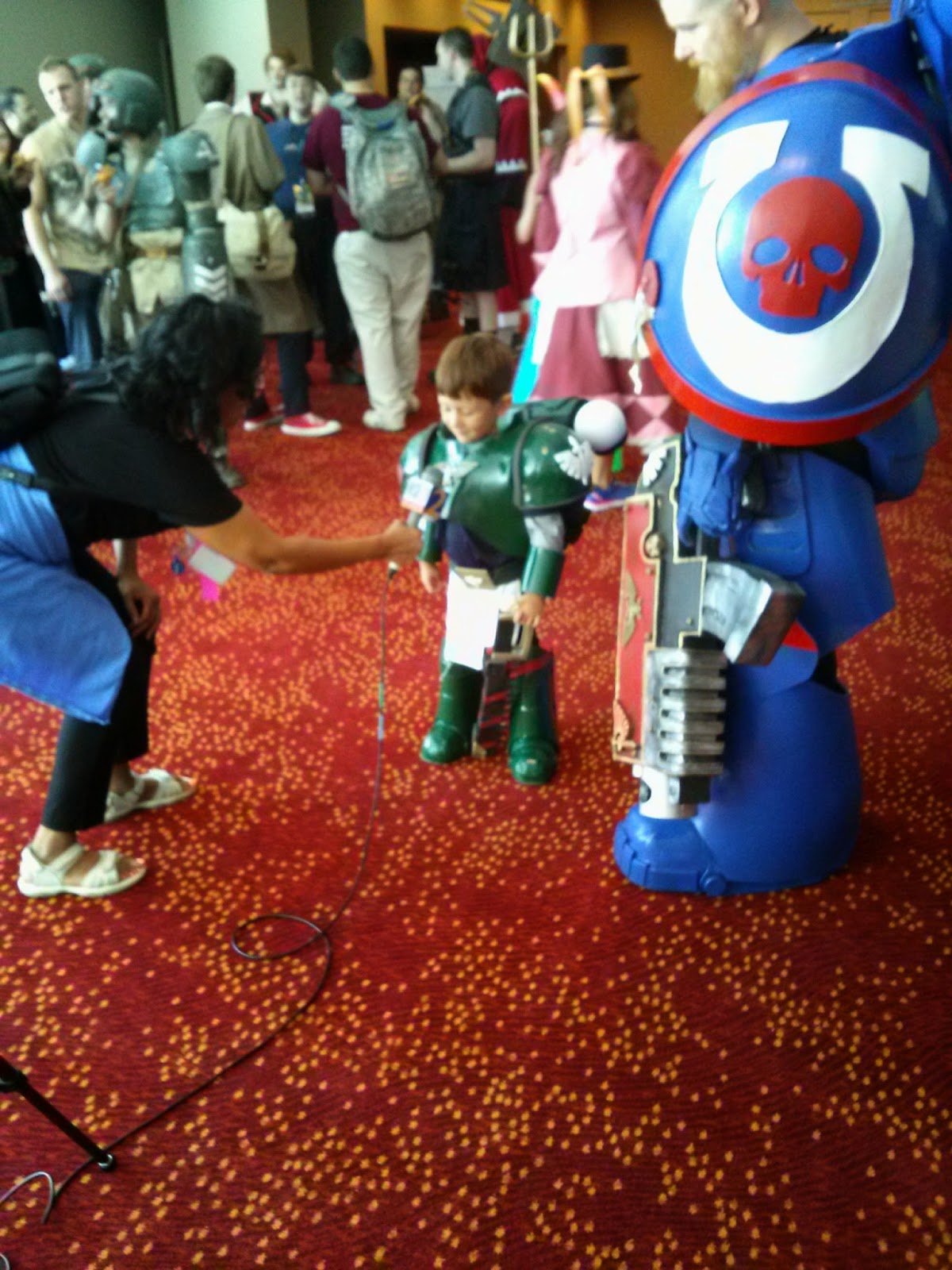 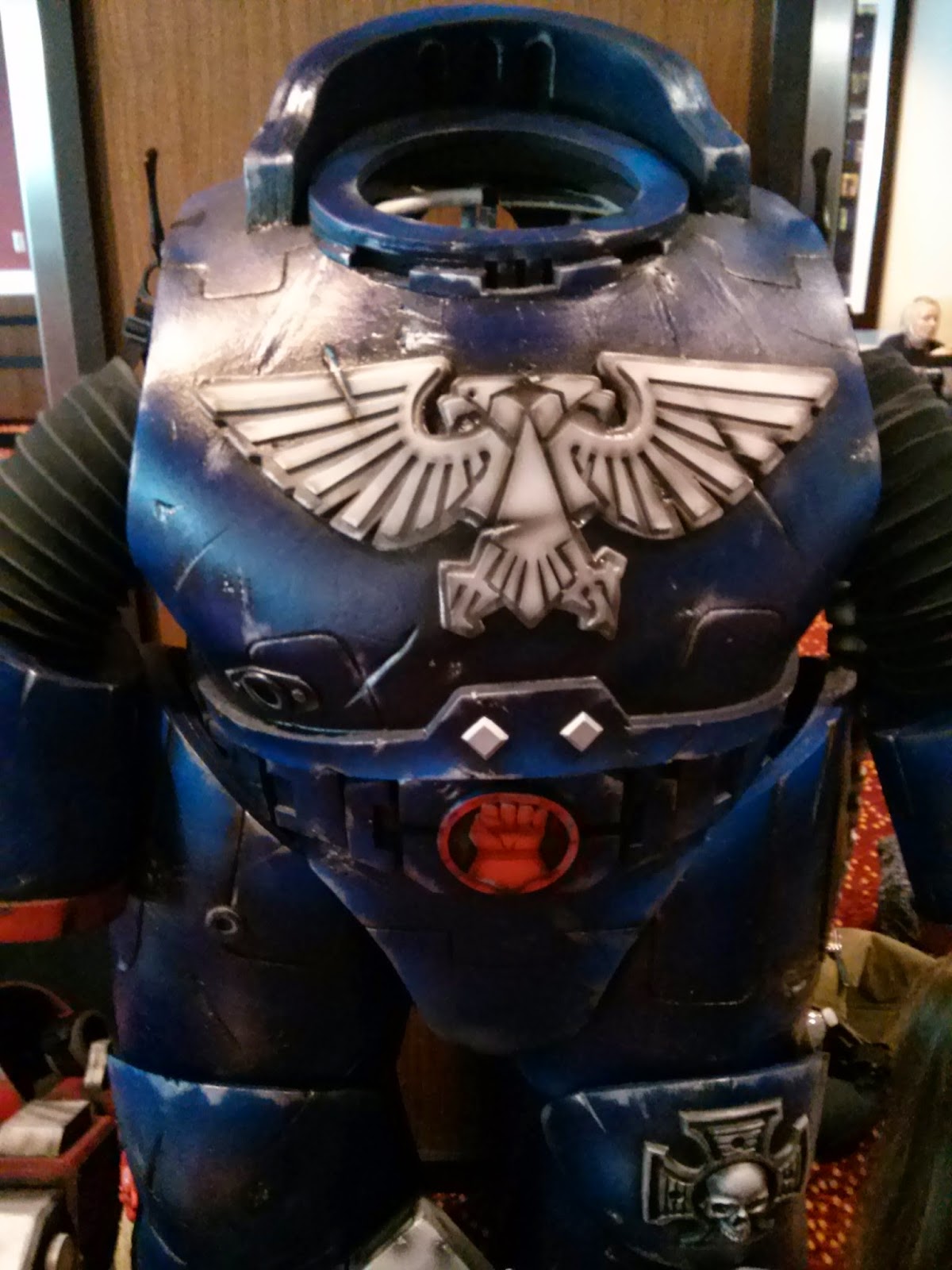 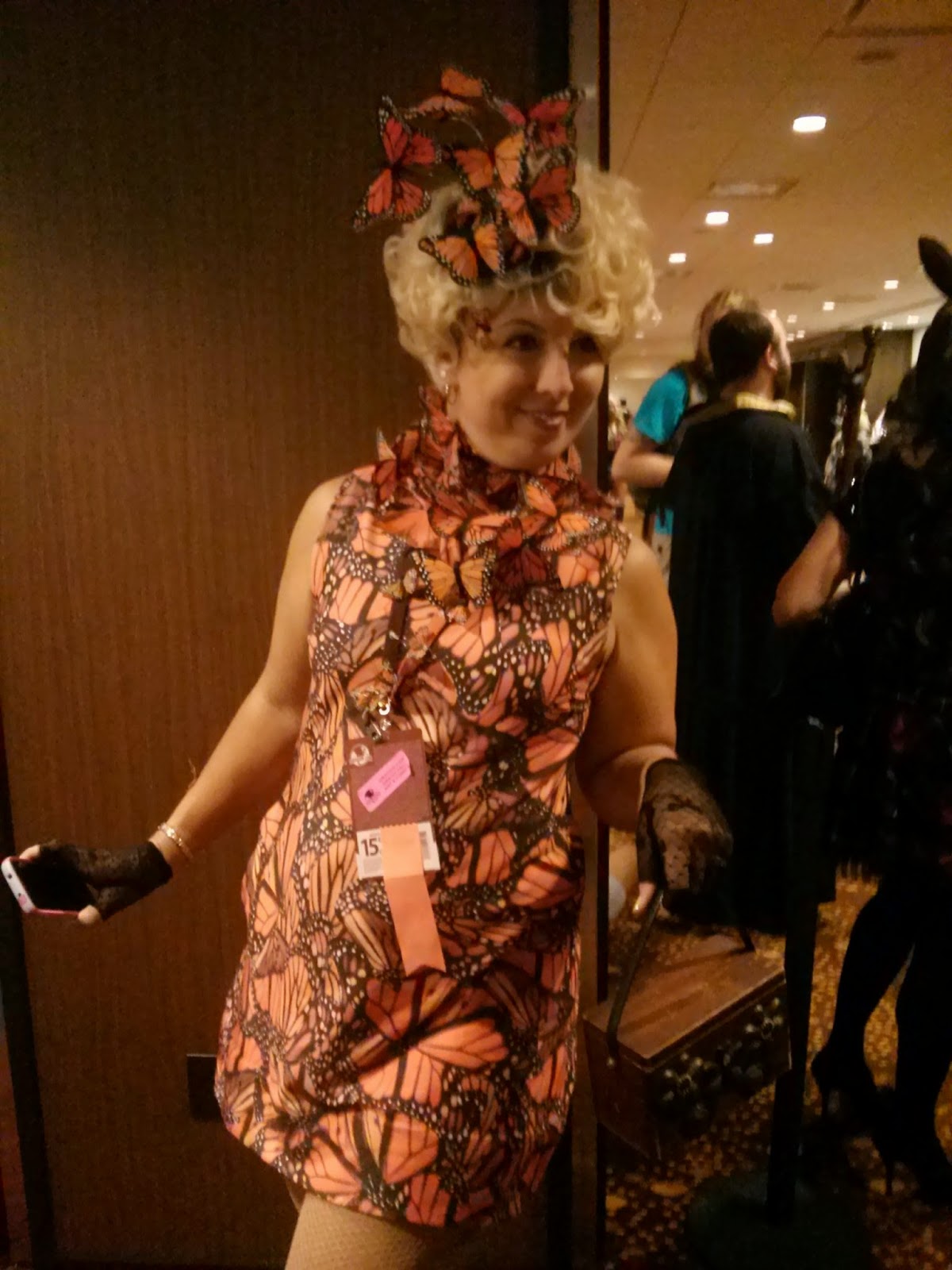 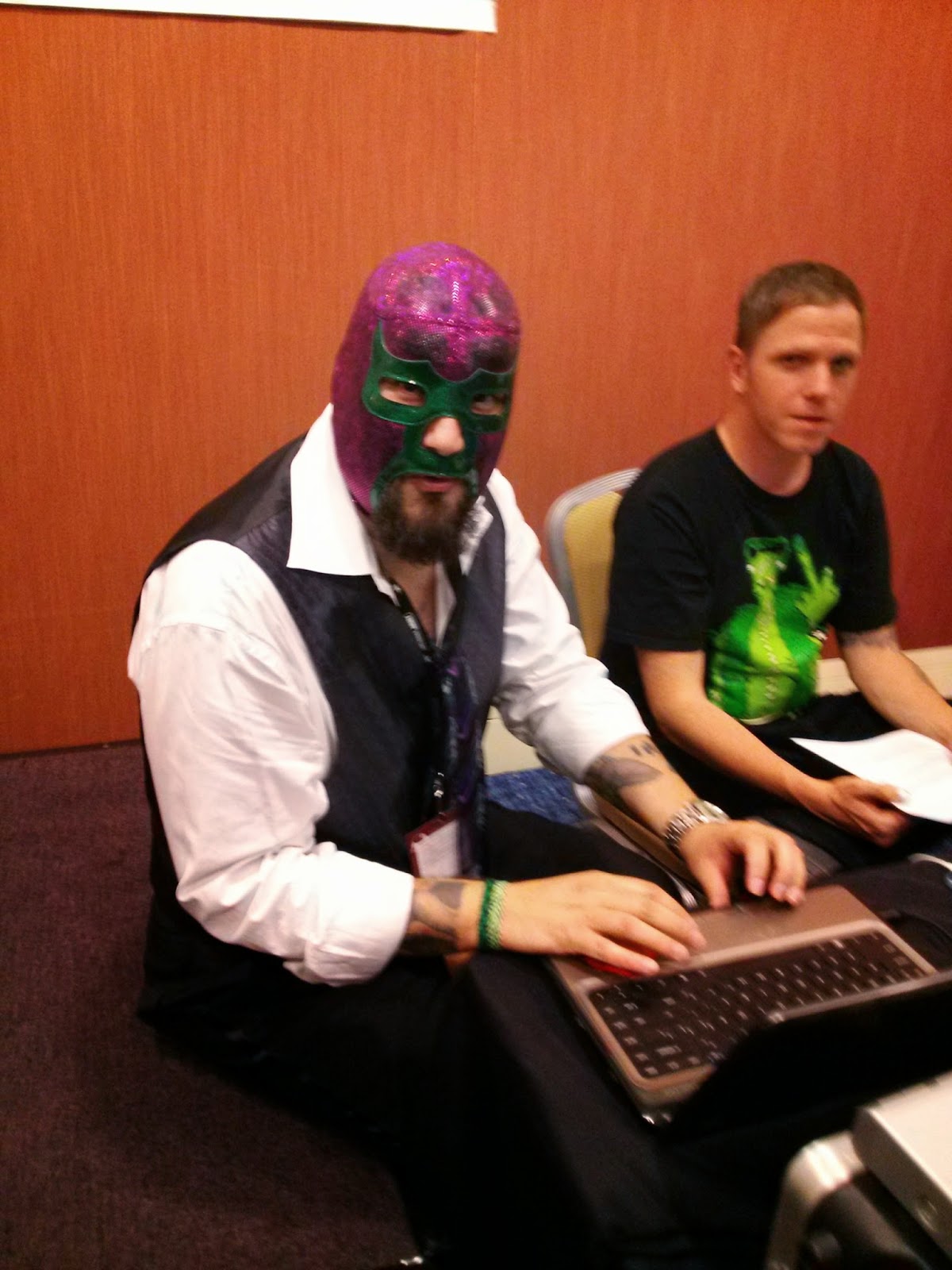 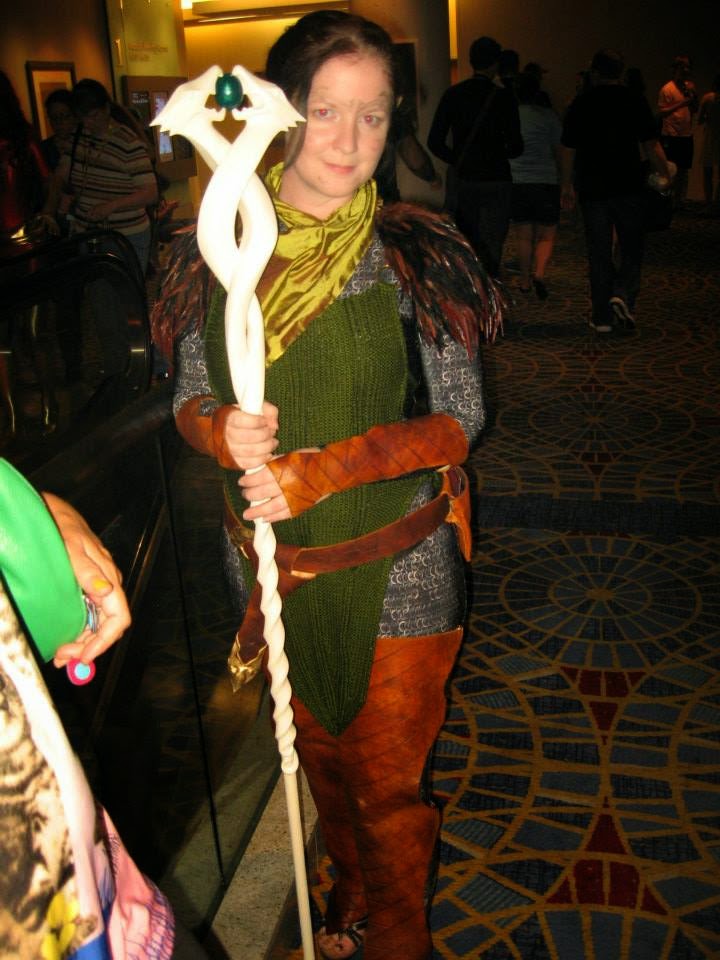 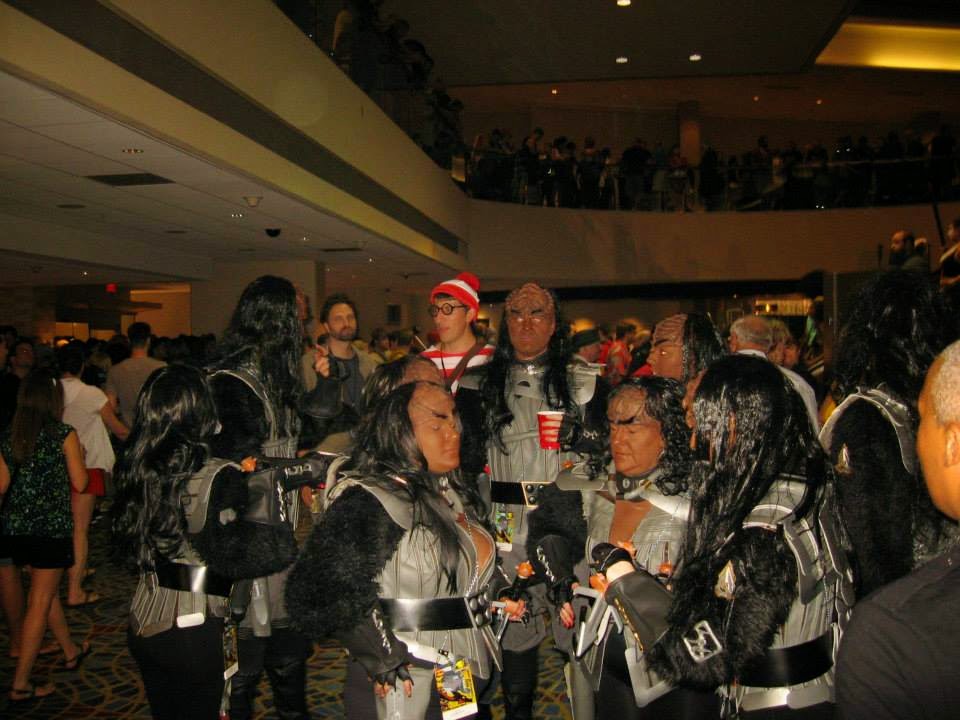 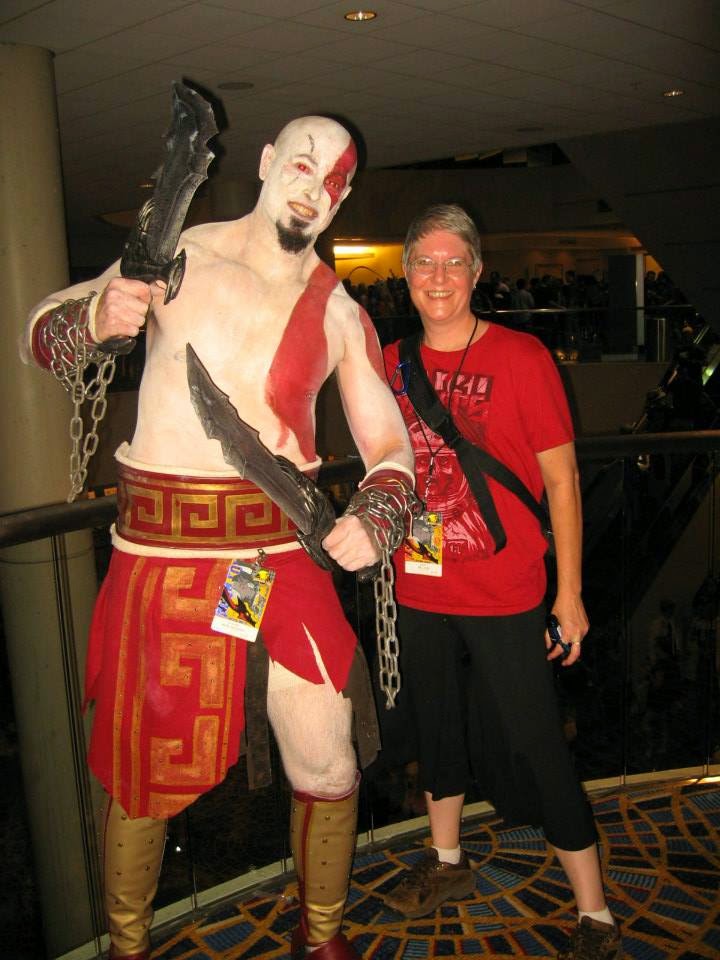 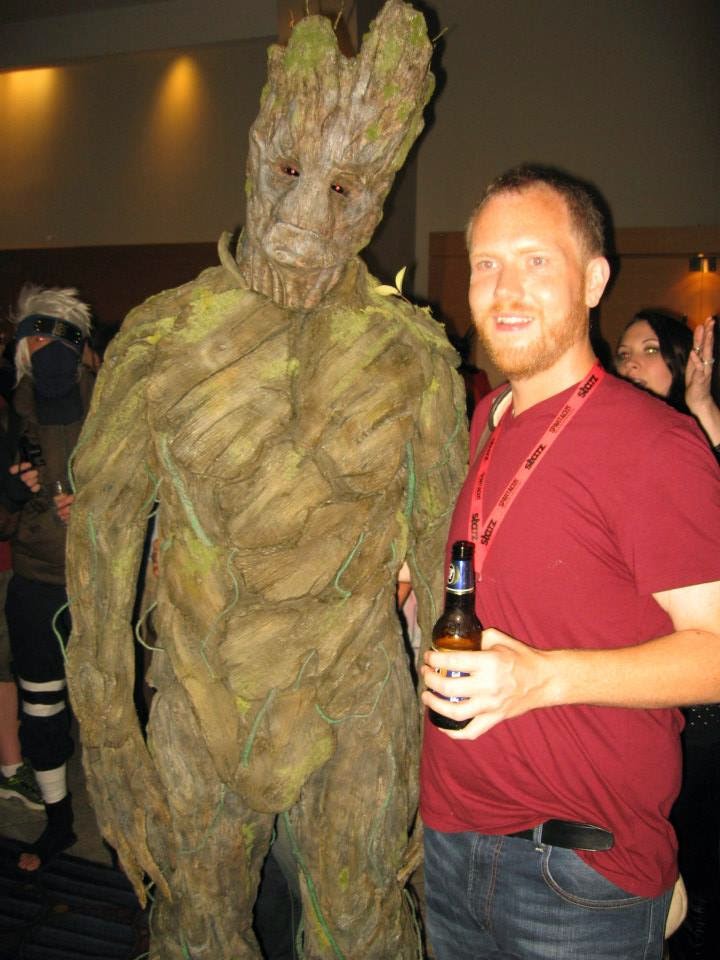 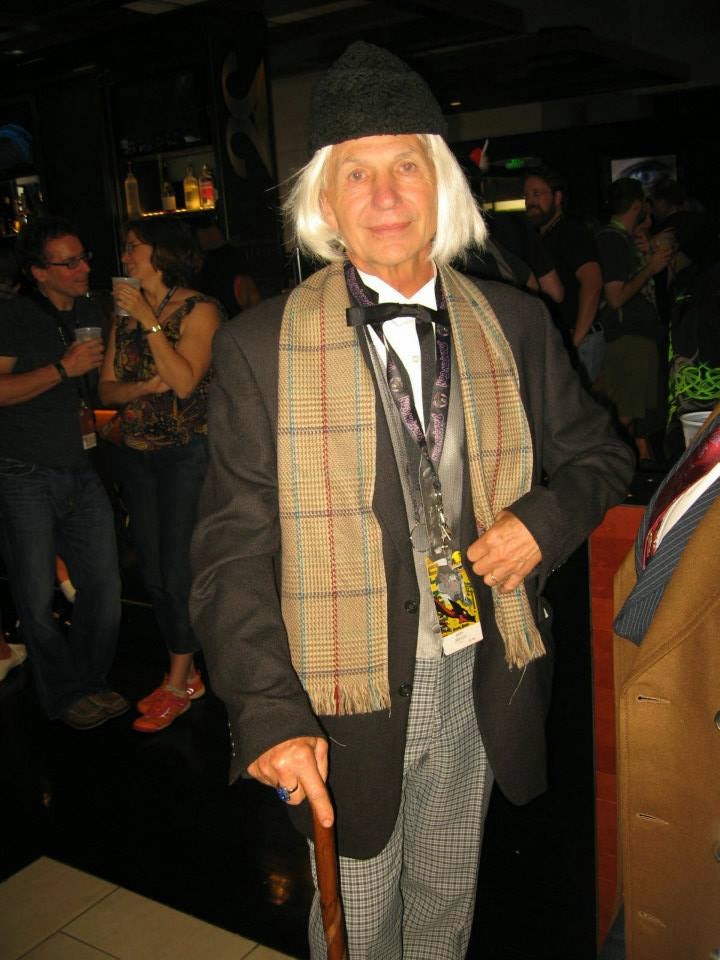 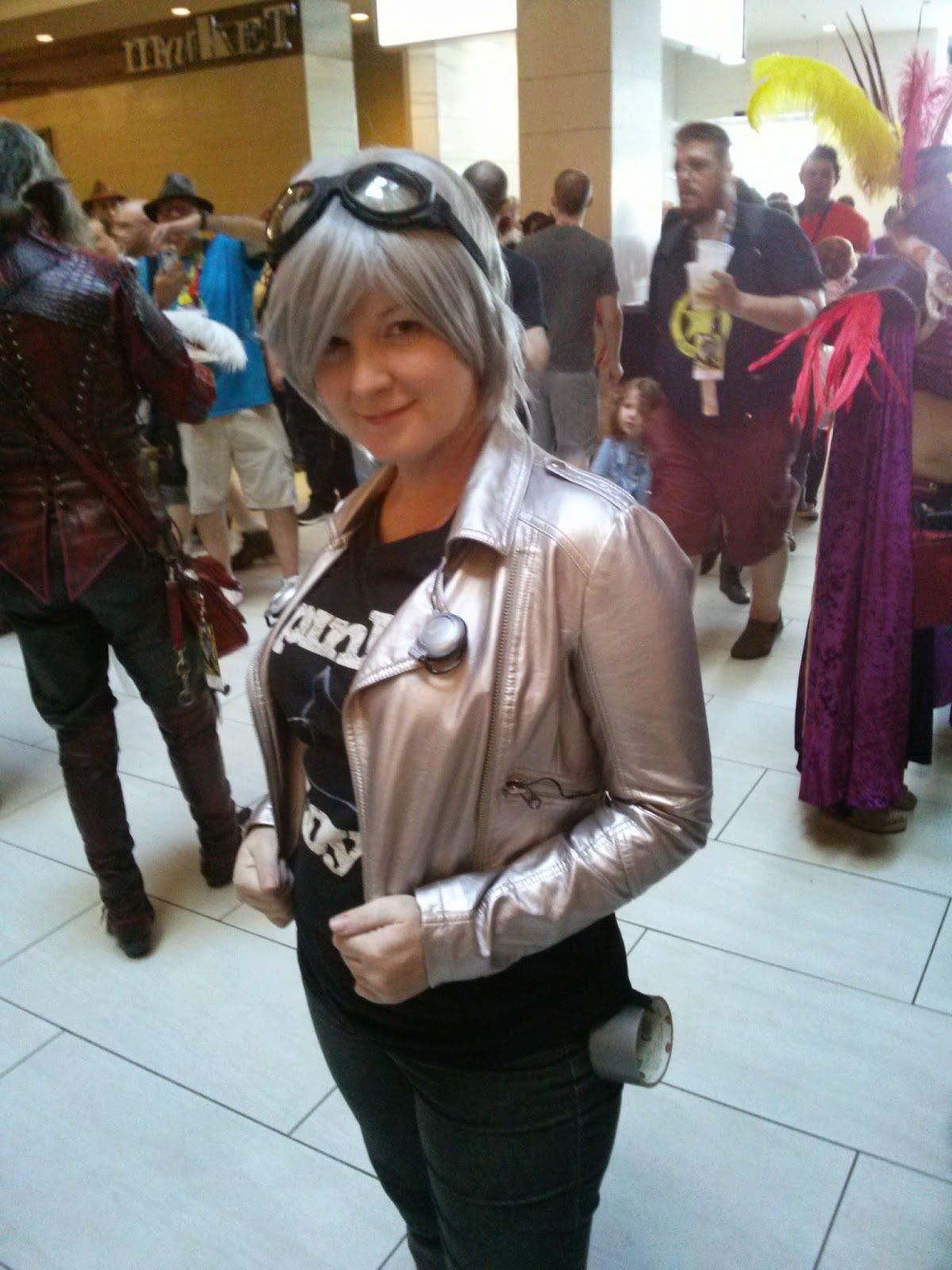 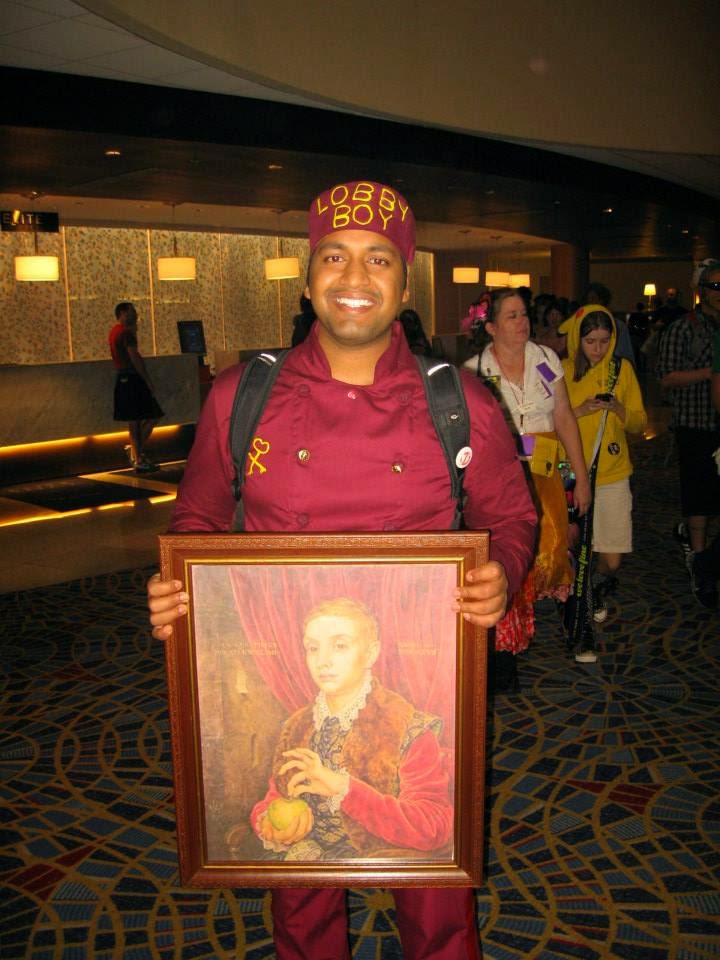