Comic Book Wednesday – Previews September 2014: These Prices Are INSANE! (but not in the way that usually means) If you don’t know, Previews is the catalogue that Diamond Comic Distributors use to offer the products they distribute to comic book stores around the country. This is where you can view and order (through your favorite Local Comic Book Shop) comic books, trade paperback collections, t-shirts, books, media, and toys and other collectibles from hundreds of different vendors that deal in geek-oriented merchandise. The genius part is that you actually have to pay for your copy of Previews for the privilege of ordering other things to pay for. It’s like the Ren Fest except without the horse poo smell.

So every month a new edition of Previews is sent out to comic book stores. Contained in the pages within are products that might be currently available or could be released anytime in the next year; but typically about two months away. Or sometimes never. I’ve ordered lots of things that have just never come in. Without getting into the specific politics of Diamond, let me just say that they aren’t quite a monopoly and also aren’t quite the worst distributor anybody has ever dealt with in the history of the universe.

I’m not familiar with Meredith Finch, but I am a fan of David Finch’s artwork. I think he’s a good match for a Wonder Woman book, except that I’m not crazy about her face on this cover. She looks kind of unsure or something. She also seems just a bit too petite. I mean other than her boobs. 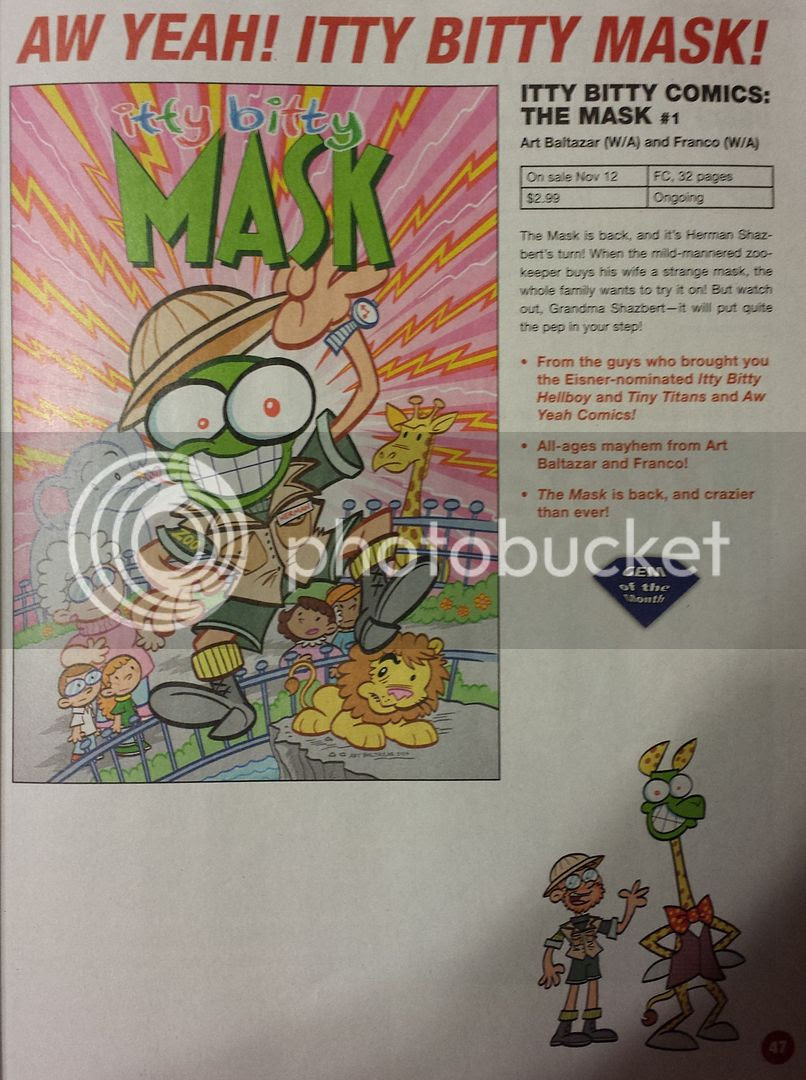 I wasn’t so sure about Itty Bitty Hellboy (thought it was a fun comic), but this one totally makes sense to me. While the original The Mask comic book is a violent, bloody tale full of adult concepts, most people are more familiar with the toned-down version presented in the Jim Carrey movie. The concept is perfect for Art Baltazar and Franco’s mischievous storytelling. 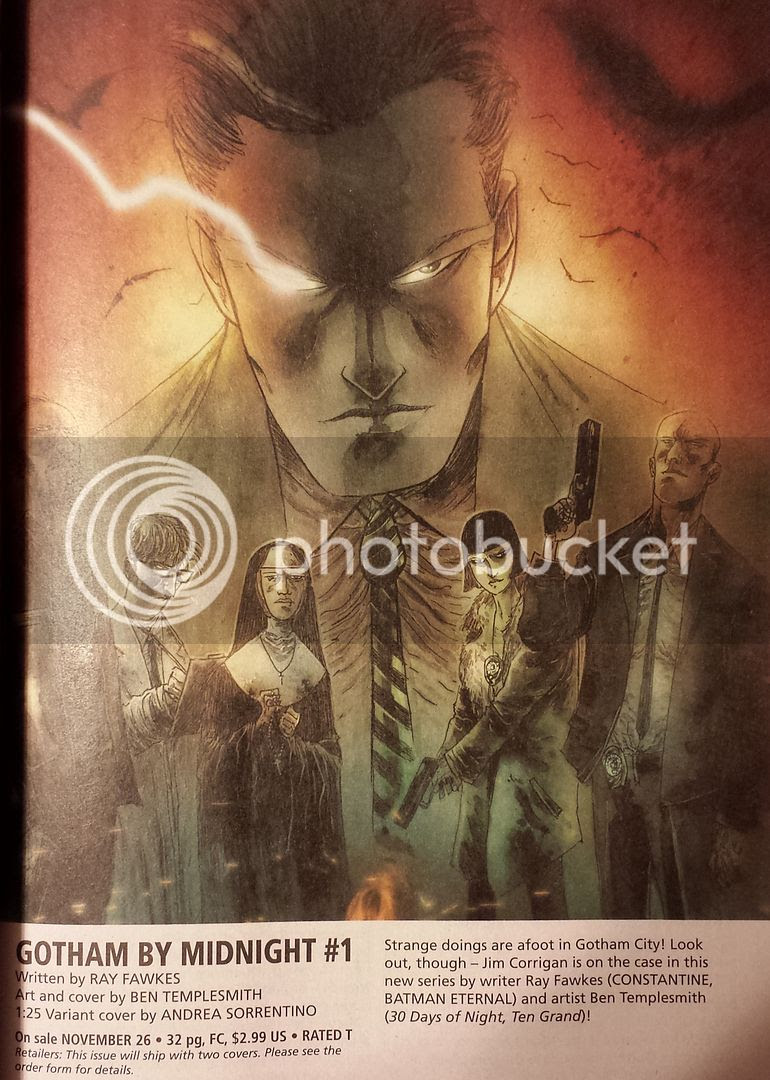 Who wouldn’t want a series about spooky goings-on in Gotham City? I think this sounds like a very solid concept. The only problem is that I already buy too many comics. So something like this needs a strong creative team for me to sign up. While I am familiar with both names, Ray Fawkes’ Constantine didn’t hook me and I’m not a huge fan of Ben Templesmith’s style. Although judging from this page of art it looks like he has tightened it up a bit. Grant Morrison’s (presumably) nutty and brilliant tale of alternate Earths continues, this time with Frank Quitely providing the artwork. I’m all-in for this event unless it just loses me in its glorious Morrison-ness. Well that’s an image that’s going to bunch up some fanboy panties.
I just decided I think it would be awesome if the new Lobo was totally just trolling the fanboys. Like, the creative teams got to tell the most outrageous, fanboy-displeasing stories ever. Batman kills Joker. Superman gives up. Wonder Woman gets rescued by Steve Trevor. Barry Allen gets a personality. RAGE ENSUES. That is a FANTASTIC cover. Before I even knew what book it was, I wanted it. The image leaps off of the page and the concept is powerful. Some kind of masked man (or robot?) is pulling the Man of Steel’s head apart while his heat vision goes bonkers. I WANT THIS BOOK! Fortunately I’m already getting it. I’ve been enjoying Johns and Romita, Jr.’s work thus far. It’s a great take on Superman and their first issue was essentially, “About all of that New 52 crap that nobody liked… forget it.” 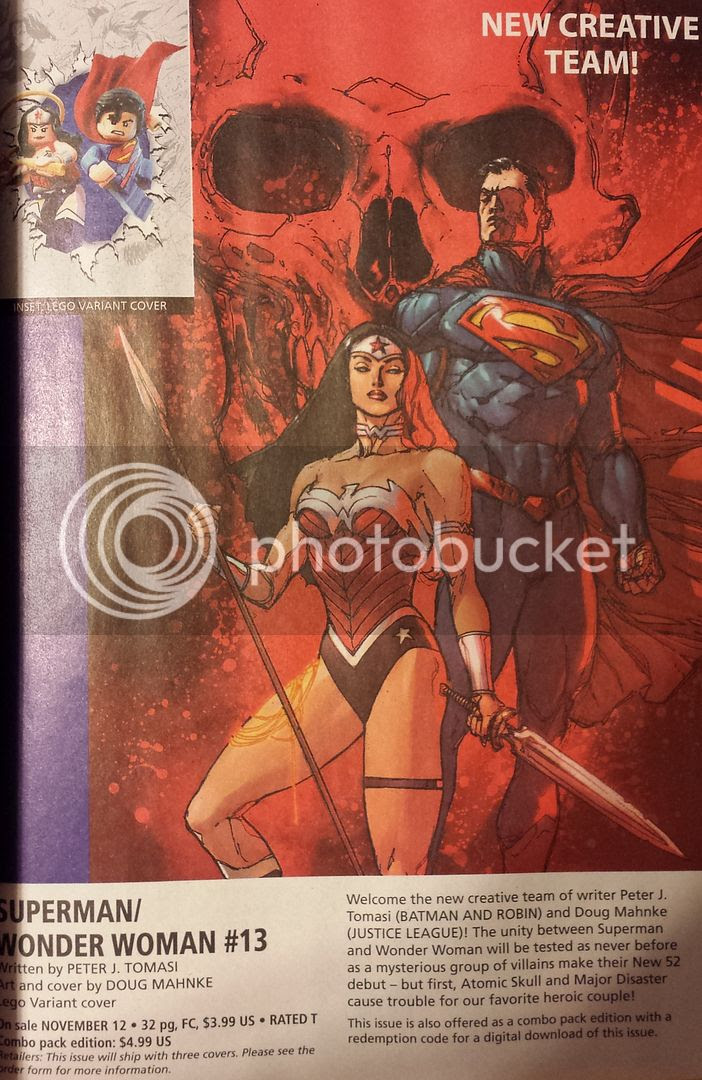 Well, crap. I love Tomasi and Mahnke. There’s no way I can’t at least give this a try. I suppose this has been tied up in licensing or something, but it probably should have come out a few years ago when Grant Morrison was referencing it. I’m curious, but I don’t know if I’m that curious. I am not a fan of Manga for the most part. Holy crap. This is fantastic. I’ve often heard about Harlan Ellison’s unproduced script starring Two-Face, but I never even thought about getting to read it. Now it’s going to happen. This is a very, very cool thing to see happening. For once the figures are going to hit long before the game does. I don’t really need a Harley Quinn that looks so similar to the one from the first game, but with the way these figures have been improving (mostly), I’ll go ahead and get one. The other three – Batman, the Arkham Knight, and Scarecrow – look awesome. I particularly like the look of the Arkham Knight and I’m dying to see this story play out. I’m also thrilled that they’re following through on Scarecrow’s threat from Arkham City. This is pure genius. I predict it will be one of the hottest-selling items DC Collectibles has ever produced. And for all you young lovers out there, take note – it comes out in February. Well, it’s scheduled to come out in February. I wouldn’t put all of my Valentine eggs in the Previews basket. 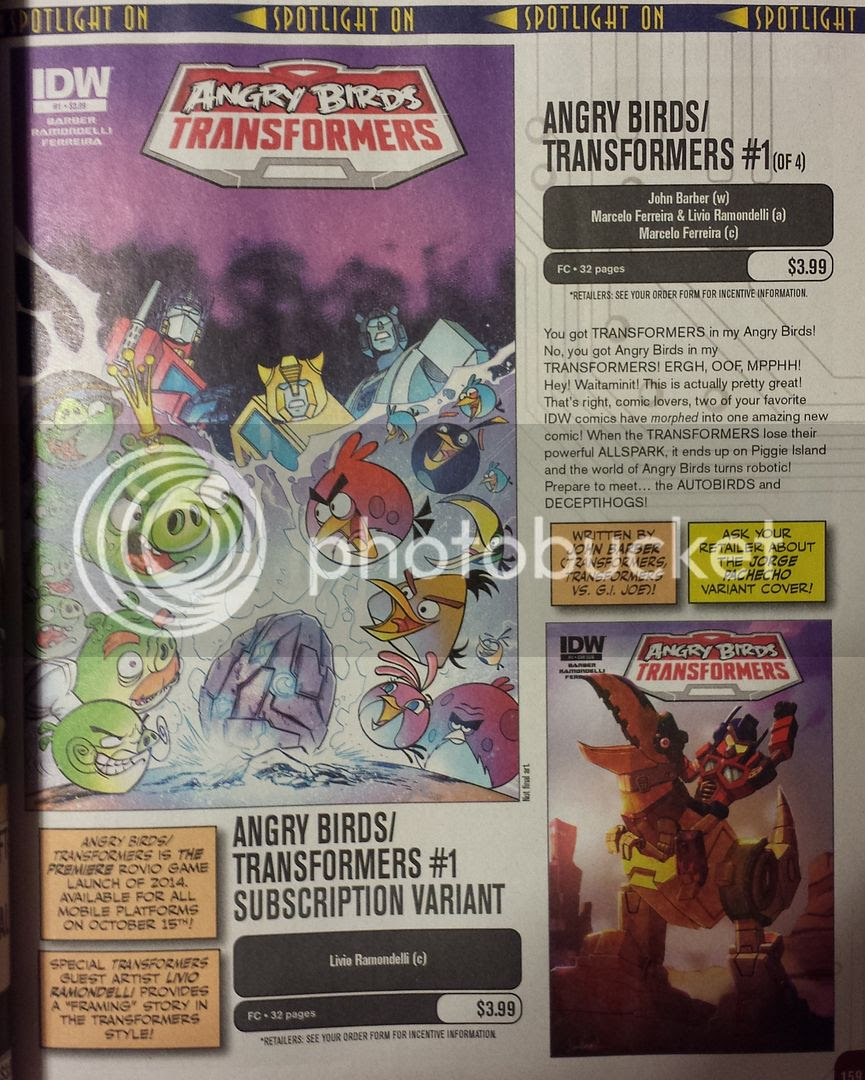 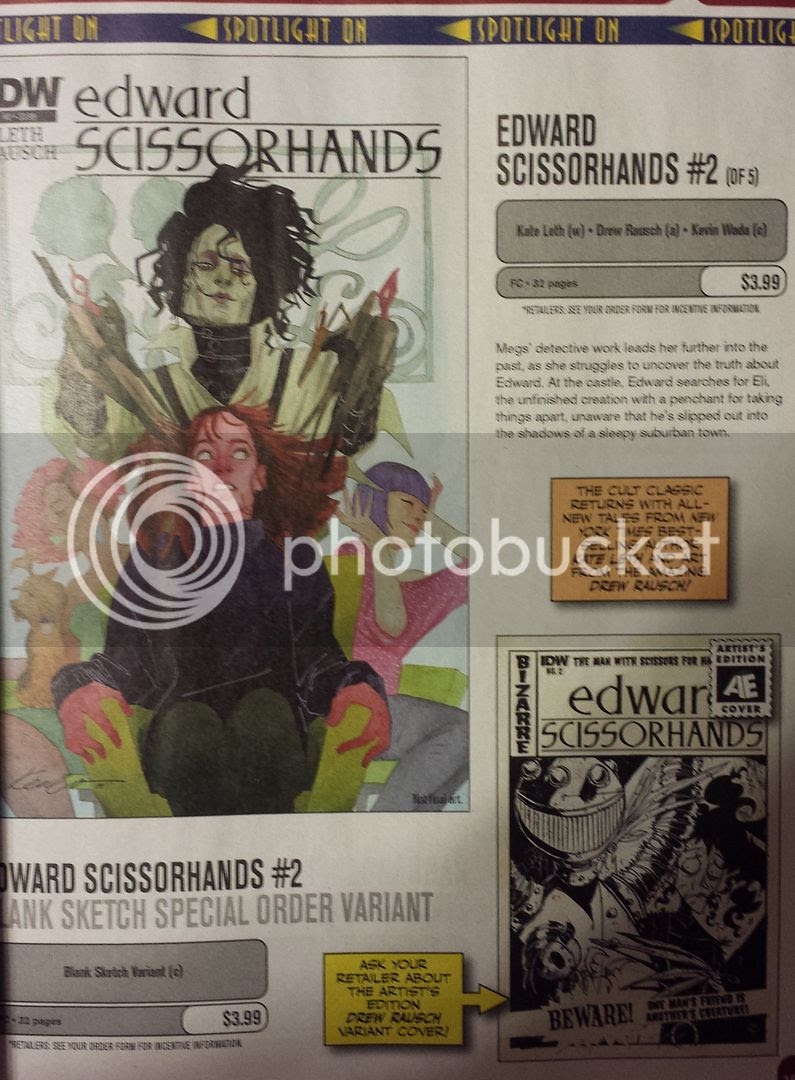 I don’t remember seeing the first issue last month. Or maybe it just didn’t have such a striking cover. I really like this artwork a lot. I have to admit to being tempted by this one. Yes, I already own all of these issues of the greatest comic book ever published. But this edition contains what basically amounts to a bunch of special features – interviews, sketches, that sort of thing. Plus it collects everything in one handy volume. This gets my absolute highest recommendation. EVERYBODY should buy it. Also, it comes out in November so it would make a perfect Christmas gift. All three of these covers are very cool. The wicked grin on Storm’s face reminds me very much of Marc Silvestri’s art back in the day on Chris Claremont’s Uncanny X-Men. The Carnage cover is just beautiful – one of those things they make into a poster. And the Hobgoblin one is just silly. Once again, Marvel is killing it in the covers department. Have you ever thought that the only thing that could make Tony Stark cooler was a head sock like Gambit’s? Yeah, me either. In the words of the inimitable Gary Mitchel – I MUST OWN THIS.

This is less of a must, oddly enough. I have a lot of the Calvin & Hobbes collections, but I lost most of my Far Side books somewhere along the way. I’d love to have both, but this one seems to stay in print fairly consistently. I’ll have to wait. Even though I don’t plan on buying this (though I might pick up the trade), I feel obligated to mention it. It is a direct sequel to Django Unchained and it is written by Quentin Tarantino and Matt Wagner. That’s crazy. Dan Brereton’s Nocturnals is one of my favorite comics of all time, but the description of this book just doesn’t make it sound essential. It sounds cool, but for forty bucks I need essential. This, on the other hand, is five bucks less and features a ton of artwork I might not have seen before. Brereton’s art is some of the most mesmerizing I’ve ever seen. He’s one of the few that can create a panel that I’ll just study and drink in.

I seem to remember it taking a while for DC to license merchandise for Arrow. The show was hot from the start and I want to say it was the second season before they even put out any shirts. They are not messing around with The Flash. I like the logo shirt, but I think the title shirt would be better with a silhouette of the Flash somewhere. Maybe running on the right side. Also, DC should copyright a color called “Flash Red” and all Flash merchandise should be that color. I like this Adam Hughes art a lot. I don’t know exactly what it is, but I just dig this whole shirt – the design, the colors, even the color of the fabric. I just think I’d feel kind of weird wearing this shirt. I don’t have any issues with sexy Harley Quinn; if you look back at the DC Animated Universe her creators clearly intended sexuality to be a key aspect of her character. But I’m not sure I could pull this one off. Twenty-four bucks for a beanie? Fifty-six to sixty for hoodies that are screen printed and not embroidered? Ridiculous. I’d love to own the Xamot, Browncoats, and Miskatonic hoodies; as well as the Browncoats beanie. But those prices are absurd. LOTS of people are jumping onto the retro Kenner-style figure bandwagon. If everybody can keep the prices at ten bucks per figure I think they’ll do just fine hitting whatever niche they choose to fill. But twenty bucks per figure for these is too much. I’ve started seeing Funko’s ReAction stuff at retail and while they look fun and certainly poke at my nostalgia, I haven’t bought any. Once I find a Gill Man I’ll definitely get him, but if I can avoid getting sucked into the trap I will. I seriously considered getting Doc and Marty to go with my DeLorean, but up close they just don’t look good enough.

Anyway, these Cthulu figures look awesome. I probably would buy these at ten apiece just because they’d be a neat novelty for my horror shelves. They even nailed the packaging – I would’ve had a hard time opening these guys. But twenty bucks is too much. I’ve been waiting for NECA to make this since the very first Xenomorph figure was shown at Toy Fair a couple of years ago. It looks absolutely amazing. But I am really, for real scaling back on my toy buying and I just can’t spend a hundred bucks on this figure. It’s huge – 30” long and 15” tall. I feel like she’s worth the price. But I can’t do it any more than I could commit to the awesome-looking Predator Blade Fighter. 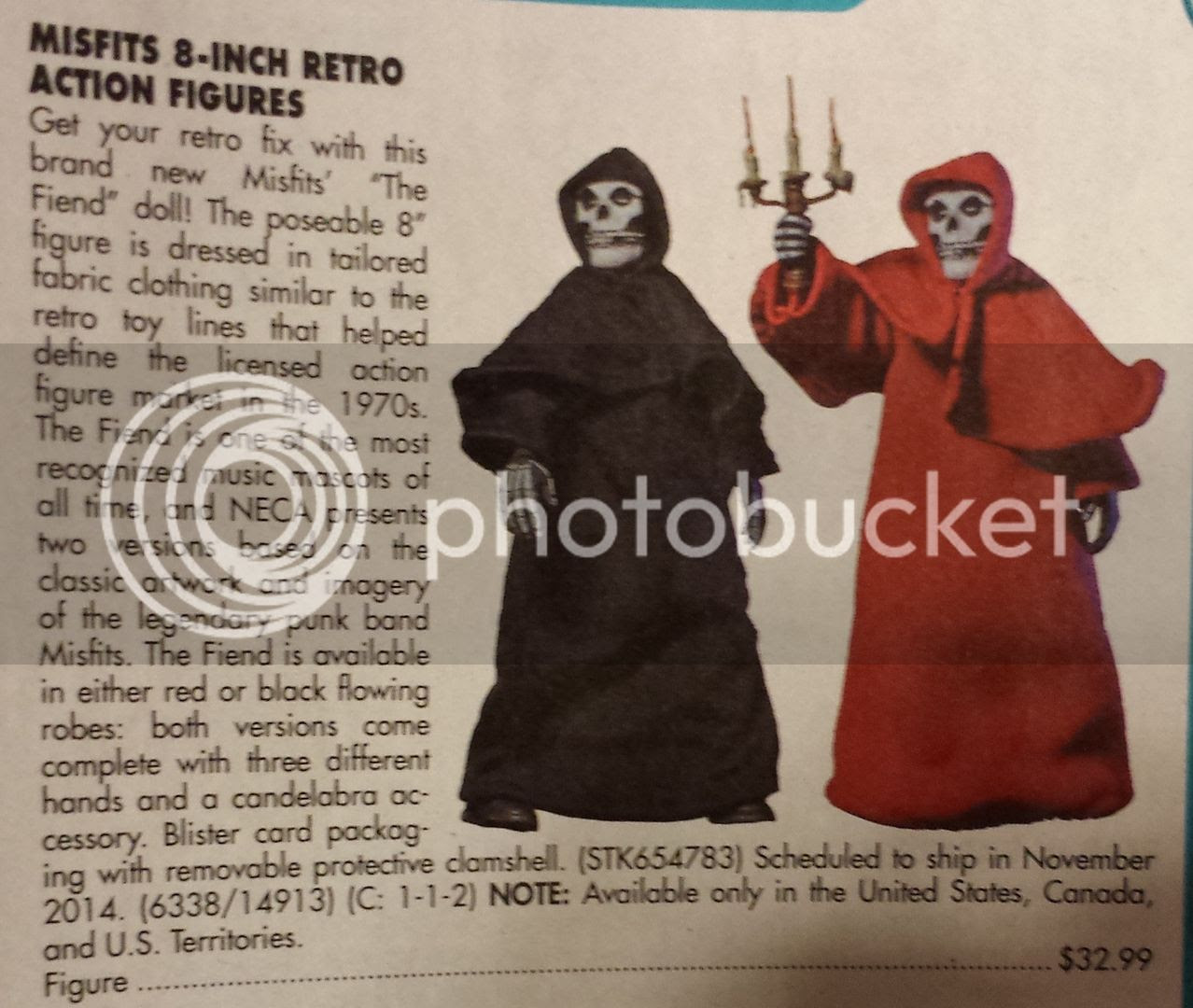 Holy cow, does everything in this month’s catalog have to be overpriced? I want both versions of this guy, but I think I’m going to have to settle for the red one. This is an awesome looking figure. I wish it were to scale with my one sixth scale Misfits figures, but I suppose I’ll take what I can get. I guess the big robe is what drove the price up on these. I would think $24.99 would be the higher end cost for this kind of figure, but NECA seems to be testing the limit. Yes. Everything does have to be overpriced. Two 5” scale figures for $54.99. If this had been offered around the time that “The Snowmen” actually aired I would have bought it. But now I’m over Matt Smith and don’t like Clara nearly as much as I did when she was Oswin. This comes in some fancy special packaging, but I’m going to pass.
Posted by Phantom Troublemaker at 11:00:00 AM