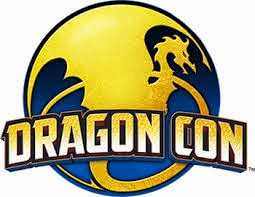 Sorry for the delay in posting, but I was struck down with the post-Dragon Con funk. Not the general malaise that follows the end of the Con, but an actual flu generated by a weekend of overindulgence/lack of sleep combined with the germs that only 60,000+ people in close quarters can provide. But I'm back and ready to get this coverage underway. And really this was going to be one story about the whole weekend, but as I barely got to Saturday evening by 3000 words I decided I might need to split this thing up. So I had to split the weekend to make it readable. Sorry to those of you with decent attention spans, but I couldn't keep my own interest after that many words if I wasn't saying anything deep or meaningful about life. And I'm almost certain you're not going to find anything like that here. But I don't know you or what means anything to your life so if there are words of wisdom here for you then go nuts. Just not literally, if you happen to be near me at the time.


I was extremely lucky to get a media pass this year. I hope it's the first of many to come. And here's the only real girly emotion you're likely to get from me here (or anywhere depending on the capacity in which you know me): I am super lucky to have a friend who believes in me and the random, over-opinionated bullshit that I spout. Thanks to him, and thanks to you for reading. That's it. Now back to snarky nerd persona. Or just me being me. However you choose to think of me is fine really as long as you keep reading. Or look at me shooting a zombie as in the below picture. 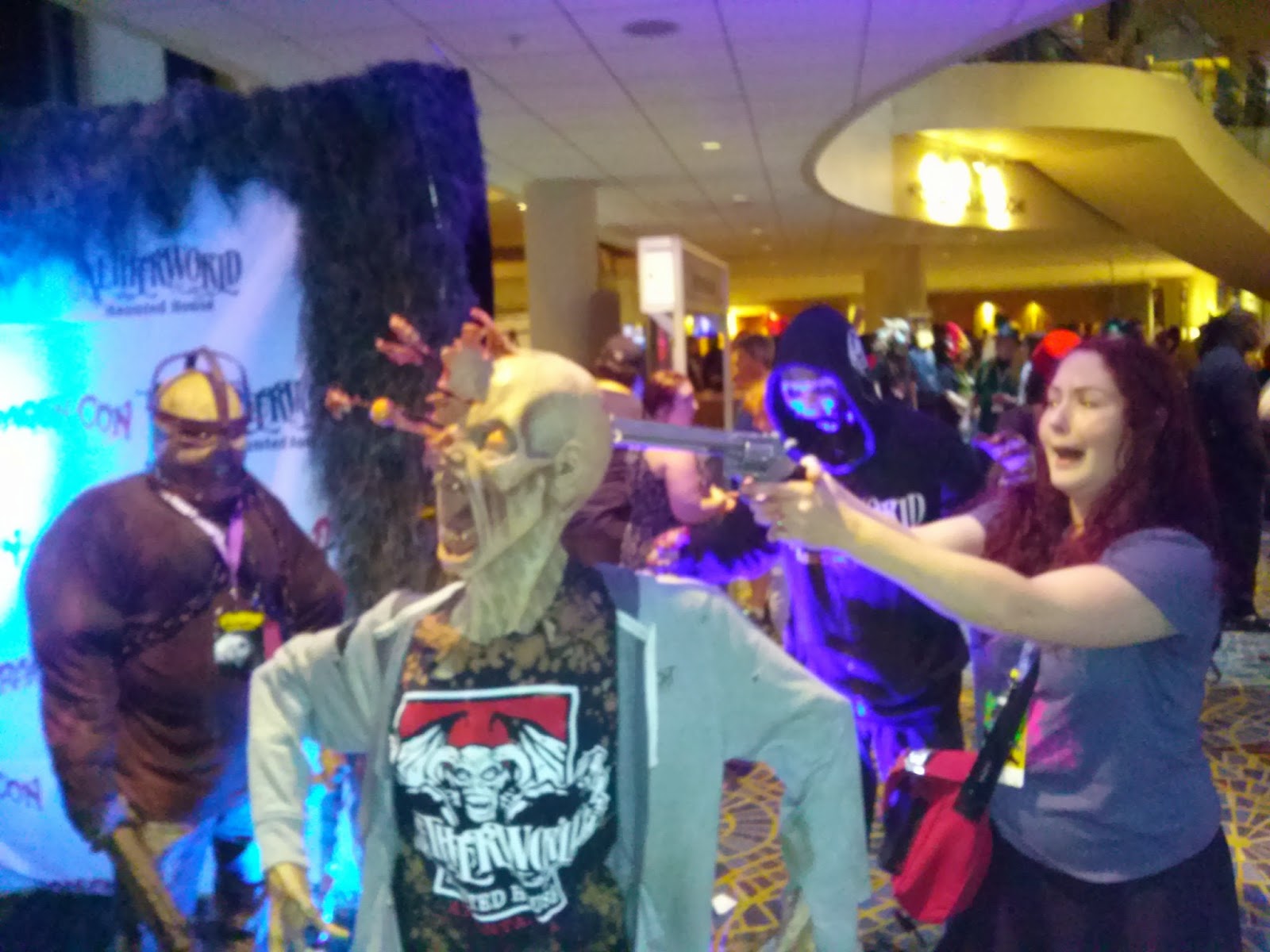 As I wanted to keep my first year's media coverage rather broad I spent a lot of time hanging out/wandering around, meeting up with pals, and just generally trying to see everything that was going on around me. It's also been so long since I've gone to anything besides late night parties at Dragon Con I really felt like I should try to check out everything possible. Standing in a 3 hour line to sit for another hour at a panel would have seriously limited my time. I felt busy the entire time (even that early part of Friday where I was alone writing), but as I sat down to form all of my notes into something coherent I felt like I barely did anything. I certainly didn't do most of the stuff that was bookmarked on my app. Given that cell service was so spotty throughout most of the hotels I ended up not really using it as much as I had planned anyway. If I had a gripe about the media relations at Dragon Con at all it would be that the room set aside for us to use didn't have any cell service whatsoever. All in all though I feel like that's a fairly minor inconvenience given all the other stuff those poor volunteers have to deal with. They were way nicer than I would have been to the guy who wanted to jump ahead of his interview time (I think he was just mad that I was ahead of him because I was a media noob). So yeah, I had to try and write in a more crowded area than I would have wanted because I needed reception to be able to meet up with the aforementioned friends. Given some of the stuff I saw last weekend I doubt the woman dictating into her phone or scribbling furiously in a notebook even registered as odd to anyone. If they noticed me at all people probably thought I was writing Con related poetry in my journal of nerdy reflection. And in a way, I guess I was. 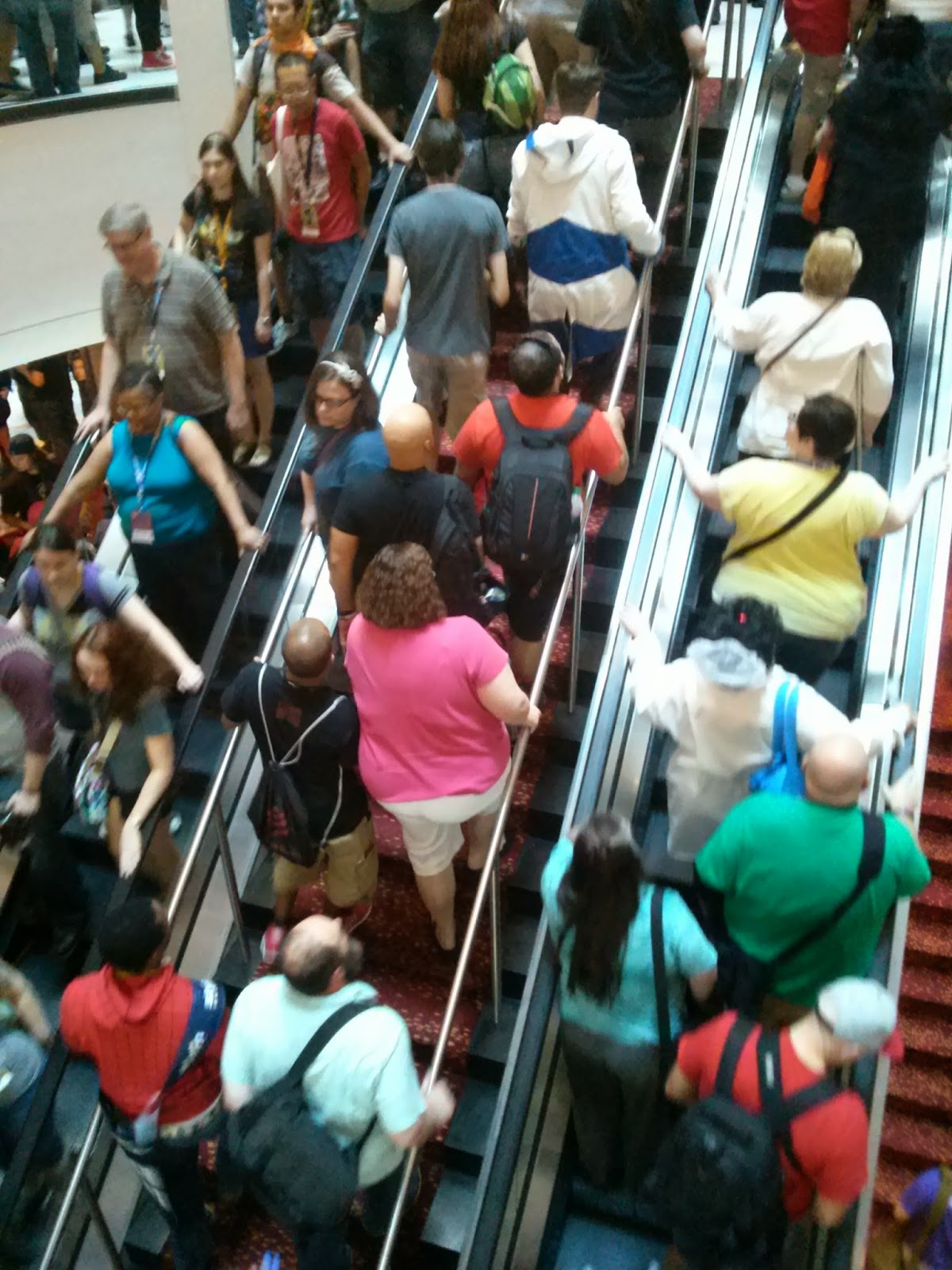 First off, you're a chump if you don't go down on Thursday. I took a mid-day nap, and didn't make it to the Hyatt until 5:30. It was already a madhouse (a madhouse!) It took longer for me to get an elevator than it did for me to get my media badge. Thursday is also apparently the new night to get crazy drunk. Several of my friends overdid things, and had a rather rocky start to the day Friday. So if Thursday is the new Friday, then Friday is the new Saturday, and Saturday is the new Sunday. By that logic Sunday should have been the new Monday, and America's Mart should have been much less crowded than it was. I guess not everyone got the memo about the new day arrangement. I met up with a bunch of friends at Trader Vic's including the boss man (who's promises of business cards are seemingly just drunken lies to keep me working). So I had 2 beers, hung around, and called it a night. I was also trying to conserve my energy for the long weekend ahead of me. I kept it classy, and filled a flask with vodka for Friday. Yes, I suppose I could have gotten a hotel room, but there's something about paying for a hotel in the same city I live in that rubs me the wrong way. Really the only reason I had planned on staying there Saturday night was because Phantom's showing of the “cult classic” movie Things was going on too late for me to catch the train afterward. If you've ever seen it you'll know why I put the words cult and classic in quotation marks. If you haven't then just realize that you can't see me doing sarcastic air quotes while you're reading this because I totally just did that, and would have loved saving the time it took to type out this explanation by just doing them instead. But I'm jumping ahead. 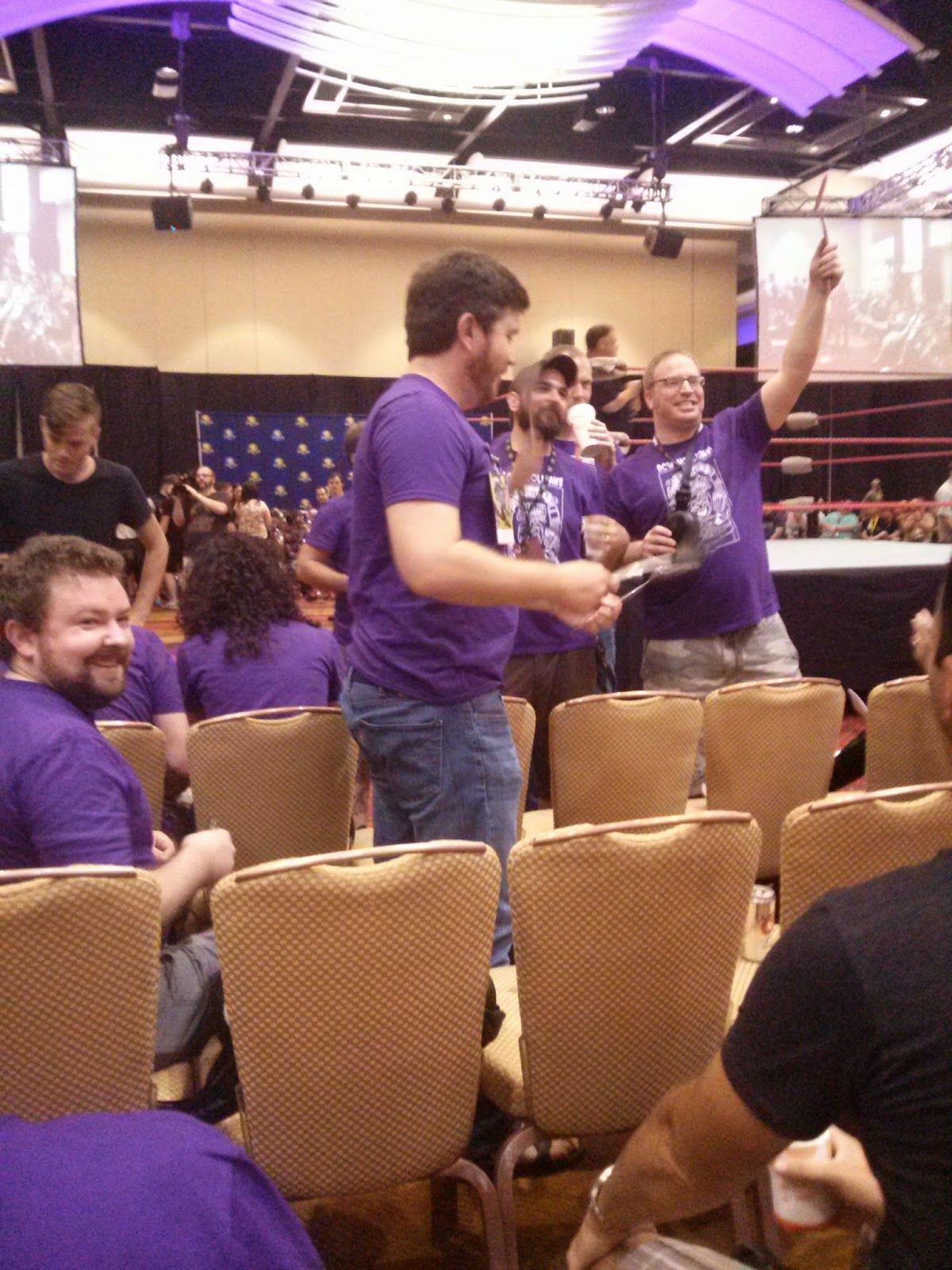 So Friday I didn't want to start enjoying myself too much too early because I had a 4:30 interview with Timothy Zahn, and one does not slur during one's first professional interview. Well, maybe someone does, probably Hunter S. Thompson did, but this one does not. I mean I'm not gonna lie, I had a little pre-interview relaxer, but I was super nervous and it helped to stop me from seeming so terrified. And you'll have to check back here in a few days if you'd like to see the fruits of that labor. I didn't get done with my interview until almost 6 (no I didn't get to spend that whole time with him. There were 5 other reporters all there for interviews, and we went in 10 to 15 minute increments. I got 15 so I think I was still pretty lucky), and by that time I'd missed the Doctor Who Colin Baker panel, the Firefly panel, and the Red Dwarf panel. And I was also starving, and thought I'd earned a drink so I met up with some people to eat dinner before the DCW Wrestling. The 3 panels I missed were really the ones I most wanted to see too. I REALLY can't complain, but with all of that off my to-do list I really didn't have anything else I was dying to do the rest of the weekend. Don't get me wrong, there was still lots I wanted to do, but so much about what you do at Dragon Con depends upon where you are at the time compared to where you'd have to get to and in what amount of time. I am probably not going to haul ass all the way over to the Westin to stand in a huge outdoor line in 90 degree weather if I'm comfortably situated at the Hilton. I'm much more likely to find something that I want to do in a much closer locale. That was my roundabout way of explaining how I ended up at wrestling. I'm not trying too hard to justify myself here. I certainly enjoyed me some WCW back in the day. Back in the days of having Phantom and Peter Reddington as roommates if truth be told. That was probably the closest I've ever come to “having stories” as the old ladies put it. It eventually got a little too soap opera even for me, and I had to move on, but I did like the idea of getting to watch some stories with the boys again. Unfortunately, wrestling was also in direct conflict with the costume contest which the ladies and I wanted to check out. So we ended up only hanging out with the DCW Hooligans for one match before heading over to the contest. In hindsight I wish I'd stayed with the wrestling given that the contest was so disappointing, but how was I to know? I've got so much to say about the costume contest, and costuming at Dragon Con in general that it's going to get it's own post as well so check back once again for that. I know that's a lot of checking back, but we've gotta keep you hooked somehow. After the costume contest and wrestling wound down we went looking for a dance party. Well, some of the girls were looking, and there were boys along for the drinking that would have gone with girls finding a dance party. We wound up in the awkward room party that everyone seems to stumble in to at some point. The one where you go in with someone who knows someone thinking it's a party, but it turns out to be a guy who just has a few friends in his room quietly sitting around and chatting . I'm sure you know the one. So instead we had a nice loud elevator party and found that the concierge level of the Hilton was extremely nice, and has free sodas on tap if you need a mixer for your booze. That's important for those of us packing flasks. We never did find that dance party, but we did find karaoke and danced around to that so it was something at least. 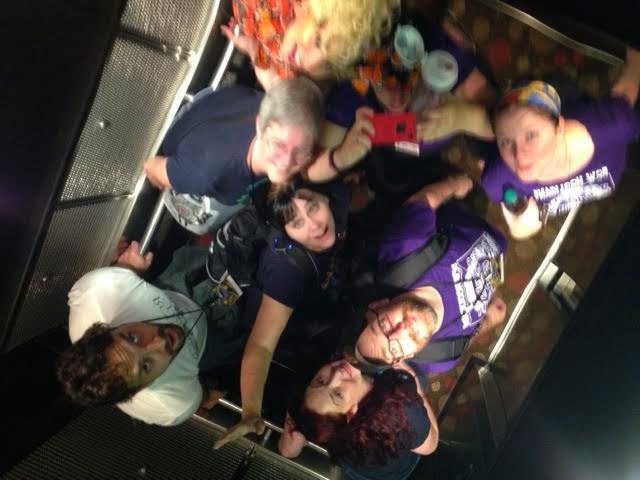 And here was where I was going to go on into Saturday and Sunday, but you'll just have to check back Thursday (that's how we get you) to hear about the rest of the weekend. And considering that 2 big Phantom things happened Saturday night (one of which I saw all of) I'm sure you won't want to miss it. But you'll also have to stay tuned if you want the costume recap, and the Timothy Zahn interview. Considering I may never get to interview anyone famous again after this you should stop by next week to see how big a fool I make of myself in front of someone famous. Hint: he was extremely nice in that "oh, bless your heart" kind of way that tells me I might not be the next Lois Lane after all.