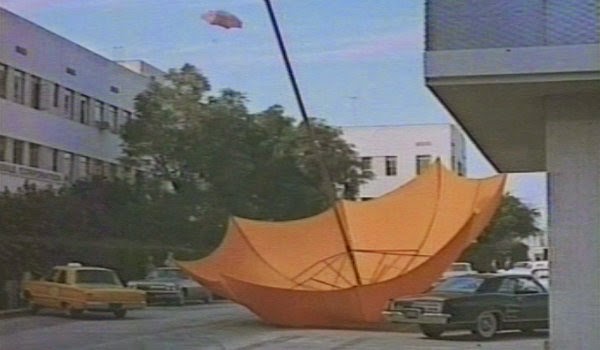 First off, an imaginary script meeting.

Head writer: "So, our first episode featuring the Penguin. Maybe we should lead off with a crime centered around penguins, or at least birds in general?"

Producer: "Fuck that shit! Birds are expensive! UMBRELLAS ALL THE WAY, BABY!"

Granted, the umbrella-based crime in the first scene is less a "crime" and more a "high-school prank"; of course, it's the sort of prank that, in a post-9/11 world, would probably land a person in Gitmo, but surely 1966 was a simpler, more-innocent time (bwah-ha-ha-ha-haaaah!).

After admitting that the entire Gotham City Police Department is, as ever, peopled with feckless morons, Commissioner Gordon once again puts out the call to the guy who keeps the police overtime budget WAAAY down, by calling him on the most-inconspicuous telephone in the history of communications (seriously, if the Hotline phone were in Liberace's mansion instead of Bruce Wayne's, Lee would be all, "I dunno; too much?"). Imaginary Commissioner Gordon Thought Balloon: "Huh. Batman's got a British butler. Is there anybody ELSE I know with a British butler? Oh, well, no time to focus on trivialities; I've got umbrella-based tomfoolery to put the kibosh on."

Once again, Bruce Wayne and his young ward Dick Grayson make their exit with the excuse of "going fishing." I hope they start diversifying on the excuses as the series progresses, lest Dick's Aunt Harriet reach the Brokebackian tipping point, and conclude that Bruce and Dick are just fucking.

#tbt moment: In the first scene in the BatCave, Alfred is busily sweeping the SOVIET-ERA NUCLEAR REACTOR BATMAN USES TO POWER THE BATCAVE. Is he sweeping up stray bits of Jill St. John? Who among us can say?

Batman and Robin arrive at police headquarters, where they're informed that the Penguin has recently been released from prison ("three strikes" laws apparently not having yet been conceived). On-hand, apparently to explain how this WASN'T a terrible idea, is Gotham Penitentiary's "progressive" (their word, not mine) warden (Totally 100% for-real dialog: "Sound penology, Warden. Sound penology." Batman, DUDE; how would you know? YOU'RE the one wearing tights. [it was physically impossible for me to resist that joke]). To see if the Penguin's reform is genuine, they watch some footage from the hidden surveillance camera inside the Penguin's cell (help me out, any attorneys reading this: Is that even REMOTELY legal?).

Upon further investigation, B&R make an appearance at the Penguin's "legit" custom-umbrella shop (stocked with THE CHEAPEST-LOOKING PROP UMBRELLAS IN THE HISTORY OF THE DRAMATIC ARTS).

Having been given no probable cause to beat the stuffing out of the Capon of Crime (crap; now I'M doing it), the Dynamic Duo depart, only to be confronted with a gigantic, stories-tall prop umbrella in the middle of the street. Now, you can tell the prop department was extremely proud of their work (as they should; it's beautiful), because the umbrella is clumsily inserted into a completely unnecessary clue-delivery bit to B&R. I don't mind though, because the prop itself touched me deep in the place in my heart where Dick Sprang lives.

After our heroes decide they need to bug the Penguin's shop, Bruce Wayne, wearing a SUPER-sharp outfit (if I haven't mentioned previously, Adam West's portrayal remains my favorite version of Bruce Wayne), passes himself off as a prospective customer and tries to surreptitiously plant the bug. In this, he fails spectacularly, and is seized by the Penguin and his men (whom he totally calls "my fine feathered finks"). After determining that Wayne is probably there as an inter-industry spy (undoubtedly representing the interests of Big Umbrella), the Penguin decides, instead of ejecting him from the premises (as is TOTALLY his legal right), to murder Bruce Wayne by having him fed into the furnace downstairs (I never noticed before how often the cliffhanger death-traps on this show represent a COMPLETELY-INAPPROPRIATE level of escalation in what generally start out as fairly benign criminal plots).

Will our hero escape, and ultimately triumph (will the Bright Knight rise, as it were?)? Well, you know how we'll all find out. 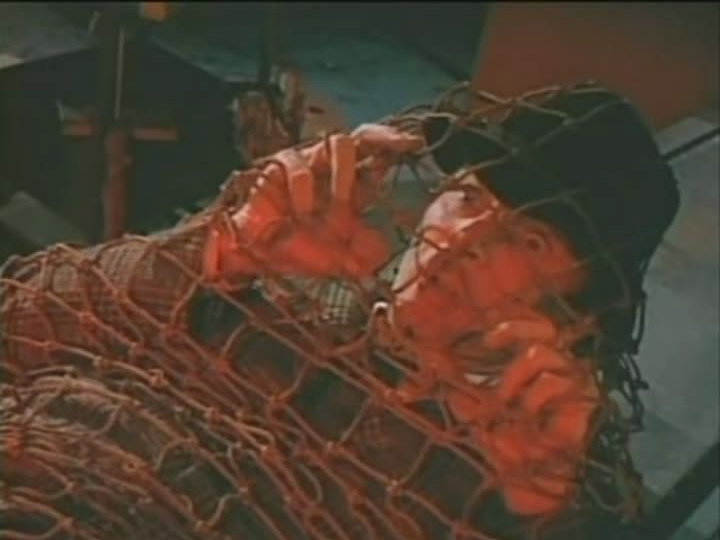 (How in the hell did I never before notice that the titles of Parts One and Two ALWAYS rhyme?)
I've never been partial to the whole "Batman is a psycho" school of thought, BUT this episode gives a little insight into what such a delusional architecture might be like. The overall arch of the Penguin's scheme is that he's not gonna plan his next crime wave, but instead plant fake clues to cause Batman to overthink these clues, and (using the bugged umbrella he gave the Dynamic Duo in the first part) then glean the details of what to do to pull the crimes off. Now, this is almost the textbook definition of a delusional codependent relationship: Not only is Batman creating his more outlandish nemeses (as pop psychologists in DC comics often claim), but he's basically giving them their marching orders. Now, like I said, I don't really buy into this idea, but this story really does give some weight to the assertion.

I myself have never seen a copy of "Funboy Magazine," but from the title, I'm proceeding from the assumption that its primary centerfold is NOT likely to be a sexy female movie star.

Which do I love more?
Speaking of which, let's talk about my favorite of all the upper-tier Guest Villains. First of all, Burgess Meredith is an objectively great actor (would that he had, even once, admonished Batman of the need to eat lightning and crap thunder). Also, his elocution whilst keeping his teeth clenched 100% of the time is genuinely breathtaking. And how is it the Penguin's prosthetic nose looks EXPONENTIALLY better than the "Richard Nixon" prosthetic makeup from Watchmen, made 42 years later?

Anyhoo, B&R trick, and ultimately defeat, the Penguin (by essentially using Alfred as bait; NOT COOL, BATMAN). In the episode's denouement, which takes place during a social event at Stately Wayne Manor, we learn three things:
Looks like Robin's sleeping on the couch tonight, folks!