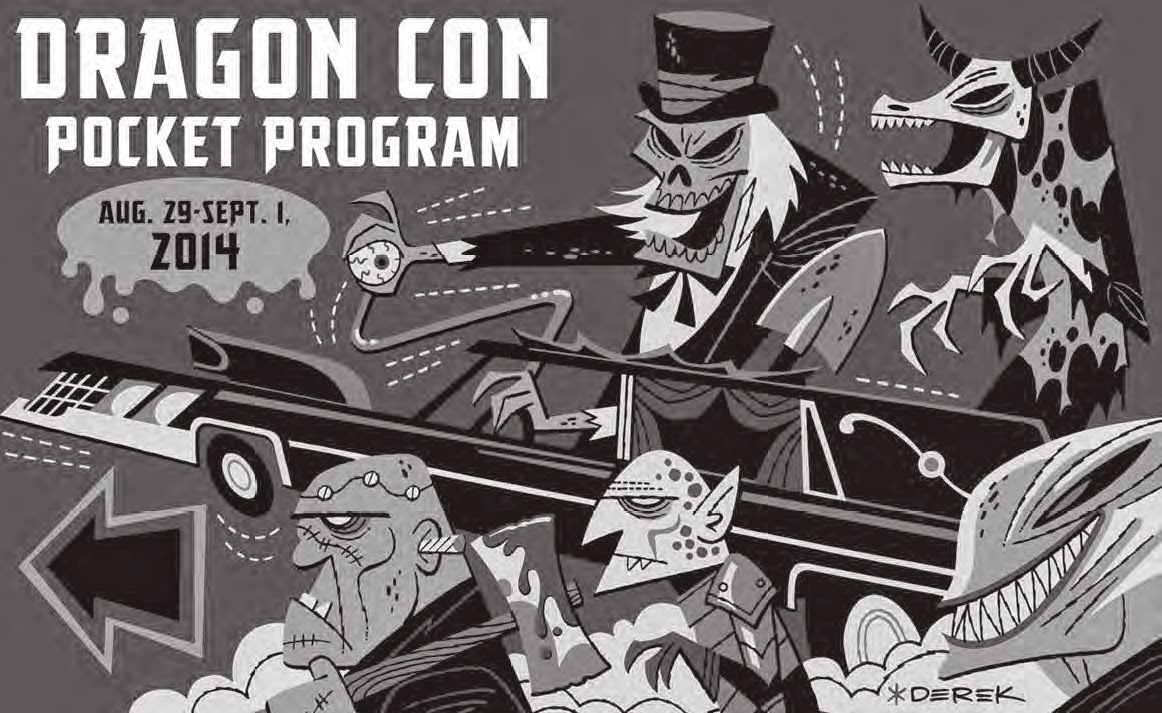 AAAAAAHHHHHHHHH!
Dragon*Con starts TONIGHT, motherscratchers!
I’ve decided that’s just how I’m going to start this post every year. It’s worked just fine for the past two and I see no reason to change it. Nobody is here for salutations anyway. You guys just all want to know what’s happening at the biggest, best, most exciting, non-stop crazy-ass nerds-gone-wild party on the planet, right?
I will be very busy at Dragon Con this year. Heck, I’ve been busy for the past couple of months. Check out the latest episode of the Needless Things Podcast for more on that.

NEWS FLASH: My event, Late Night Sci-Fi Theater: THINGS 25th Anniversary is going to serve as the Needless Things meetup. It’s at 11:59 Saturday night in the Marriott on the Marquis level, rooms M303-304. We’ll be watching my favorite movie of all time, THINGS. It’s awful and we’re going to have a great time.
If you won’t be there Saturday night, DON’T DESPAIR. You can often find me at the Marriott on the Atrium level in front of the elevators and facing the escalators. I will, of course, be at DCW. And later on you’ll see my panels, highlighted in PURPLE.
As always, I am focusing on things that I am interested in or plan to do. This year, rather than doubling up on events at the same time (or even tripling up), I am only going to list one event for each time. This is partially because I obviously can’t do more than one thing at a time, but also because I am writing this super late in the game and need to streamline.
This is but a tiny sampling of all of the delights available at Dragon Con. For a full listing be sure to download the Dragon Con 2014 app and pick up a Pocket Program when you register.
Also be sure to attend all of my panels and give them a 5 out of 5 in the app.
THINGS OF IMPORTANCE
Badges – Dragon Con will be limiting access to convention areas to keep freeloaders from horning in on the action that we all save and plan for every year. I think this is great and that if it were at all possible should be done 24-7. What this means is that you need to have your badge and/or your hotel key on you AT ALL TIMES. Every time you leave your room, check to make sure you have these items on your person.
Gaming Guide – The Gaming Track now has its own book, which will be issued upon registration with said track in the Hilton.
DC TV – This is one of my absolute favorite things about Dragon Con. As I mentioned in my 2014 Dragon Con Preview, DC TV shows sketches, panels, and for the first time ever will be broadcasting the Parade LIVE (maybe).
Hotel Bars on Saturday Night – They close at midnight. PLAN ACCORDINGLY.
Walk of Fame – In the “Hours of Operation” section this is listed as being in the Hilton. In the Pull Out section (huhuh) it is listed as being in the Marriott. It is in the Marriott. These things happen sometimes when you cut and paste your These things happen sometimes when you cut and paste your
Thursday
I will be arriving Thursday morning. If you are hanging around and have naught to concern you, message me via El Phantasmas on Facebook. I’ll be looking for trouble to get into until later in the evening. These things happen sometimes when you cut and paste your (okay, enough).
It’s interesting to note that the schedule grid does not include Thursday night, despite the fact that several tracks have programming scheduled then.
Friday
Saturday
Sunday
Monday
Normally I throw a few more Monday things on, but I know I’ll be checking out Monday morning and heading home. I always end up missing the family too much to stick around for long. RetroBlasting is hosting a TMNT panel at 10 and then the GI Joe panel featuring my pals Noel and Jonathan will be at 11:30. If you’re still hanging around you should check them out. The Joe panel was a HUGE hit last year and I think it’s a real shame it ended up being on Monday morning this year. But the track has so much stuff that it simply can’t fit everything in primo spots.
If you want the full schedule, download the Official Dragon Con 2013 app or the schedule, which is available on the Dragon Con site.

I said this last year and I meant it - keep an eye out for me and please do say hello if you see me. If I’m not rushing off to a panel or a Needless Things photoshoot involving #nopants and #sideboob I’ll definitely hang. Probably over a beer. Or two. And let me know who you are. I’m pretty easy to identify, but if I only know you from your tiny Facebook or Twitter profile picture then I’m probably not going to recognize you immediately.

I don’t know what next week on the site is going to look like, but you can follow me on Facebook, Twitter, and Instagram for constant on-site updates.
Oh, and I will be wearing a super-secret costume at some point during the weekend. It’s creepy. Find me and I’ll hook you up with some fabulous prizes.

Also, if you’re here checking out Dragon Con stuff and haven’t visited Needless Things before thanks for coming by. Me and my writers post five times a week (mostly) and it’s all original content that you can’t get anywhere else. I do the Needless Things Podcast about twice a month (or more) when there’s something special to talk about. And definitely come back in October for my 31 Days of Halloween! It lasts all month long and everything on the site is thoroughly Halloweeny! Each weekday post also includes a rundown of SyFy’s programming.
Posted by Phantom Troublemaker at 11:00:00 AM