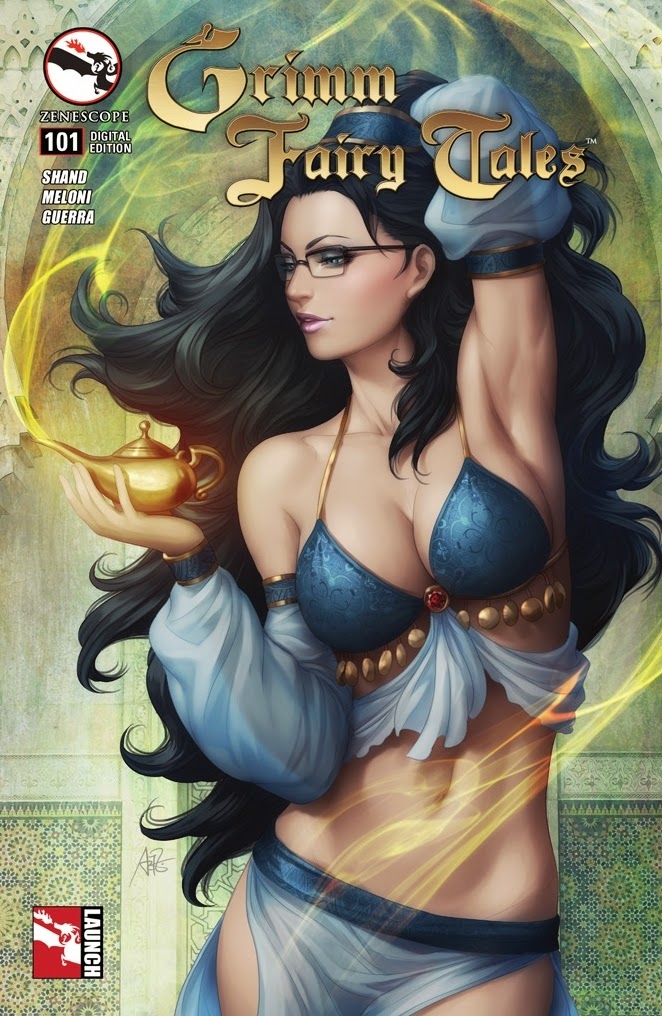 FULL DISCLOSURE – I received a review copy of this comic from Zenescope. This is the first free anything I have ever gotten from any kind of major entity.
Also, Zenescope is sponsoring Whose EFF Is It Anyway?, the game show that I am hosting with Miss Lady Flex at Dragon Con (and possibly elsewhere). Whose EFF starts at 10 PM on Saturday night in the Marriott M303-304.

I’m writing this before I read the comic and I have no intention of letting the sweet deal I’ve set up color my opinion of the comic. I’ve never read a Zenescope comic book before because I’ve always dismissed them as gratuitous T&A comics. Mrs. Troublemaker, on the other hand, is a fan of Zenescope and actually owns a bunch of the comics. So this should be interesting. Here we go.

This issue is being promoted as a jumping-on point for new readers, something that I don’t think comic book companies consider often enough. I know absolutely nothing about the world of Grimm Fairy Tales, but obviously I have assumptions. Judging from the covers and solicitations I have seen, I always thought Zenescope was presenting versions of the Grimm fairy tales that might be truer to the source material, but more salacious at the same time. I don’t know if that was the case, but GFT 101 brings something quite different.

The press release specifically notes that going forward the book will have a “YA” feel, which took me a minute to figure out meant “Young Adult”.

The cover definitely leans more T&A than YA, but what’s inside is quite different (aside from the get-up Sela Mathers – the seeming main character – is wearing. At first I thought it was a little weird, but it’s basically just Snow White crossed with Wonder Woman with some thigh-high boots thrown in for good measure. It’s a little cheeky from behind, but overall not anything crazy for comic books. I think the trenchcoat makes it seem weirder. 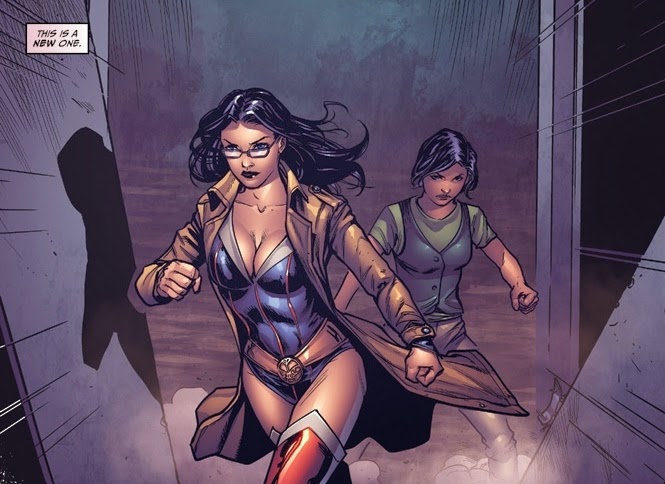 So here’s the story:

There are four realms surrounding Earth – Wonderland, Neverland, Oz, and Myst. I get the impression that these realms aren’t really supposed to interact. Sela is some kind of Guardian that I think maybe keeps that from happening. The opening scene depicts Sela and her daughter, Skye, tracking down some stray orcs on Earth and blasting them back to Myst. Skye is the narrator and – true to the YA feel – the POV character.

Over the course of the book we are introduced to a few other characters that don’t really get developed too much, but only because this is just one issue. We get a sense for them and, of course, have the introductory paragraph to describe them. But they aren’t really the point of this book. The point is to establish what the premise will be going forward.

After Sela and Skye dispatch the orcs, they proceed to a school and meet four new students, each from a different realm. Some familiar teenage roles are established and it is revealed that Sela and Belinda – a character we don’t really know anything about other than that she’s a reformed enemy – will be teaching/training these kids. One of the kids – the dim, hunky, mischievous dude – finds trouble and we have a cliffhanger for the next issue.

I was expecting the characters to be influenced by the ones from classic fairy tales – if not the characters themselves – so I was a bit surprised that none of them were clear derivatives. Even Sela with her Snow White look felt distinctive and different. Over the course of time I think this will be a good thing, though for me as a first time reader it made the characters a little more difficult to identify with.

For the most part I really liked the writing style. “My life – until now – has been a weird, twisted bowl of suck” is a line that caught my eye because it’s different and conversational. It came from Skye and is just so un-comic-booky. It reminds me a bit of the way Tim Seeley wrote Hack/Slash. The narration and dialogue are both much more straightforward than I expected from a title that borrows from Grimm fairy tales. I guess I mean that the book doesn’t seem to take itself too seriously. That’s a good thing.

The art is quite good, if a little lacking in personality. The movements and facial expressions are great and the artist’s storytelling ability is solid. I never had trouble deciphering what was going on, which is frequently a problem with comics from two other publishers whose names I won’t mention.

As a matter of fact, that was the big triumph of Grimm Fairy Tales #101 – the storytelling format. The pages were clean and easy to read, the panels had an obvious progression, and the artist kept everything simple and nice to look at. There aren’t any annoying visual tricks or weird pages where it becomes difficult to determine which panel to look at next. The action was always clear and intuitive to read.

I can’t say that I would pick up the next issue if I had bought this one. With the amount of comics I already buy I just couldn’t justify following one that wasn’t my thing. And young adult fairy tale comics are not my thing. Having said that, the cliffhanger got me and I am looking forward to reading the next issue. It’s a very well done comic book that stands out in today’s market for having solid storytelling and a clear concept. Also, it is, indeed, a solid starting point. While I felt the presence of a preexisting story, it didn’t bog down anything that was going on in this issue.

If you’re into fairy tales and new takes on old concepts, I’d say you should give this a try. Plus, Sela totally looks like the Baroness, just all fetished up in a Snow White costume. And that’s great.