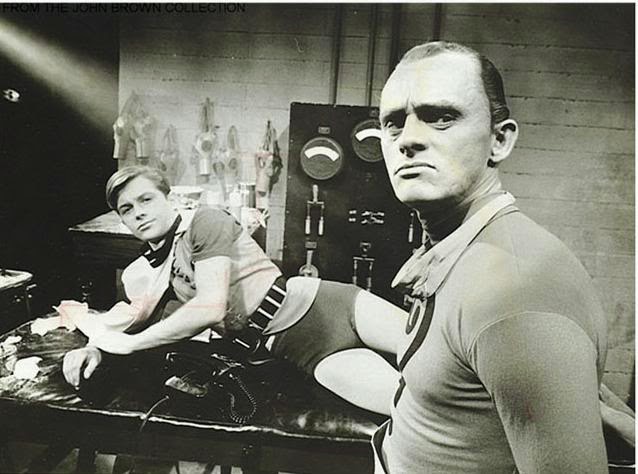 
It's astounding, in retrospect, how much this show came out of the gate firing on all cylinders. Lots of TV shows, even great ones (and especially ones as high-concept as this), take time to find their voice, or at least to lock down how they wanna tell stories. But not Batman.
Where do I start? Let's see:

As soon as the police figure out that the Riddler is back in town, Commissioner Gordon detective-shames all his top (old white male) cops ("Do YOU know how we can defeat him?") on his way to the conclusion that the only sensible course of action is to call in Batman.
Wow! I did not remember that this episode makes specific mention of the murder of Bruce Wayne's parents (twice!); I'll be very interested to see if this happens again. While I'm on the subject, I notice that Adam West's Bruce Wayne is, at least early on, kind of a brooder.
I'mma fast-forward to the signature scene in this episode: the nightclub. Batman, after making a spectacularly low-key entrance, ends up being roofied by the stunning Jill St. John (honey, I'm pretty sure you could have gotten him to sleep with you without dosing his drink), performing the immortal Batusi, and having to hand his car keys over to a cop ("You're in no shape to drive, Batman"). The takeaway for Batman: Best to leave the clubbing to Bruce Wayne, buddy. (Add'l note: Jill St. John's character is named "Molly"; which leads me to wonder if she actually spikes Batman's drink with MDMA)
While Batman's in the club getting his freak on, Robin (being underage) is stuck waiting out back in the Batmobile, where he is hypodermicked (it's a word NOW, assholes!) into unconsciousness by the Riddler (don't do drugs, kids!). The Riddler then tries to steal the Batmobile, only to discover that the Batmobile is protected by Viper (Liberace Edition). So, he changes his plan, kidnaps Robin (way to escalate your upcoming prison sentence, there), and tries to set fire to the Batmobile. However, the Batmobile, being possibly the smartest character on the show, is having none of it, and promptly extinguishes the flames (and, by "flames," I mean "sparks and colored smoke"; I'mma warn you up front: If you don't dig colored smoke, then Batman is NOT your show).
The episode ends with Robin strapped to a gurney, with the Riddler holding a scalpel to his face. Pretty menacing, right? Well, as the voiceover promises, "The worst is yet to come!" 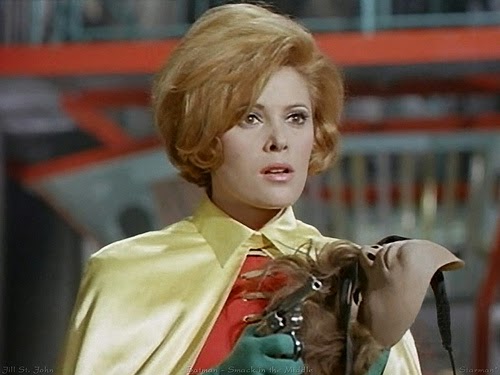 This is Part Two of the story started in "Hi Riddle Diddle" (I would NEVER leave you hanging)
In the first scene, the Riddler forces the tied-up Robin (hmmmm; didn't know it was That Kind of party...) to call Batman on the phone, so they dial Commissioner Gordon's office. Actual dialog:
"Could you patch me through to the Hotline?"
"Of course, son."
Translation: Batman never gave Robin his home number.
sub-Translation: HE'S JUST NOT THAT INTO YOU.
So, the Riddler's fiendish plan: Make a life-cast mask of Robin's face, so as to disguise Molly as the Boy Wonder.
Fiendish Plan Score:
• C- for concept; No one not suffering from advanced macular degeneration is going to mistake Jill St. John for a teenaged boy (and MAN does she fill out a Robin costume).
• A+ for execution; Burt Ward's performance as Jill St. John-in-drag is PURE SPUN GOLD (and a little bit sexier than one might care to admit).
Speaking of, let's talk about Frank Gorshin's Riddler for a minute. While it would be easy to just mention how Joker-like his portrayal is, I think that writes it off a bit too quickly. He brings such a leering, pervy quality to the role; Gorshin makes you believe the Riddler is genuinely demented, and you really have no clue what he might do next. Also, during the course of this two-parter, the motherfucker has more costume changes than a Lady Gaga concert; Gorshin's Riddler strikes me as the basis for a FABULOUS drag king act, and I can't believe it's never been done.
So after the Riddler "cleverly" arranges to get Molly-as-Robin back into Batman's waiting arms (you only think I'm making that up), once inside the BatCave, Batman announces that he saw through Molly's disguise immediately, due to poor casting of the life-mask (the World's Greatest Detective, ladies and gentlemen!). While trying to escape, Molly falls into the SOVIET-ERA NUCLEAR PLANT Batman uses to power the BatCave (seriously, dude? You're under the damn ground; would it have killed you to go geothermal?), where she meets with what is almost certainly a grisly demise.
The episode's climax (yup; Molly's horrifying death occurs in the second act) happens at the Moldavia Exhibit at the Gotham City World's Fair, where the Riddler plans to steal the hugest, heaviest art treasure he could possibly find (best dialog of the scene: "What is that?" "It appears to be some sort of vulgar, low comedian."). Of course, Batman and Robin arrive to save the day; and, after the first free-for-all fistfight of the series (NO WAY no one was hurt in the making of those scenes, BTW), the Riddler is caught in an explosion (as signified by the ubiquitous colored smoke), and his fate remains unknown (don't worry, folks; he'll be back!).
You guys, I am so far spending way more time writing about these episodes than I am actually watching them. It's gonna be a long, dark July, y'all.
#samebattimesamebatchannel
Posted by Phantom Troublemaker at 11:00:00 AM