Today is my sister’s birthday and one of the things we always had in common was a love of dinosaurs. We’re eight years apart, so we didn’t share a lot of interests (aside from annoying each other), but I think dinosaurs were one of the few things we really bonded over. Weird Al was another, so you can tell she’s pretty much an okay person.

Anyway, that makes me want to write about dinosaurs.

I love dinosaurs when I was a kid. I devoured dinosaur books like crazy and learned all of the complicated names so that I could identify the various species on sight. My favorite wasn’t the stereotypical tyrannosaurus rex – it was the ankylosaurus. I liked the brontosaurus and the triceratops, too, but the ankylosaurus had awesome armor plating and that brutal tail that could smash its enemies. Plus it wasn’t a predator. It just wanted to hang out and eat ferns and stuff. I liked that.

Dave Barry – one of my literary heroes and a huge influence on my work – once observed that kids like dinosaurs because they’re the first thing that they discover that are too big for mommy and daddy to tell them what to do. Bill Watterson made a similar observation in one of his Calvin + Hobbes strips.

I don’t think my interest in them had anything to do with that because in my younger years I didn’t have any trouble doing what my parents told me to. That’s the flip side of the number of toys I had.
Actually, that’s a good point. Sometimes when I write about the toys I had when I was a kid I feel a little guilty, like having the USS Flagg and the Terrordrome are things to be ashamed of. I hate to think that I have been affected by our country’s moronic anti-wealth and anti-success movements, but maybe I have. But I was a great kid until I got to be about ten. Up to that point I never got in any trouble, I did what I was told, and I kept mostly quiet and to myself. I deserved and – more importantly – earned every toy that I had. Including a decent number of dinosaur toys.

The first dinosaur toy I remember owning wasn’t really a toy at all. It was one of those wooden models where you punch the pieces out of a piece of balsa wood and then put them together. I had fun putting it together. I loved puzzles. Heck, I still love puzzles. But once it was together it was just this kind of crappy looking wooden tyrannosaurus rex skeleton. I believe I had a triceratops as well. These were not good toys.

I also had a few incredibly dangerous rubber dinosaurs. There was a brontosaurus made of the densest, thickest rubber you’ve ever seen. I’ve had mallets that were more forgiving. The body probably weighed ten pounds and the tail was sharp enough to stab somebody. Not just in the eye, as is the common toy safety concern. No, this thing could probably have penetrated flesh. And the teeth were vicious, too. Despite the brontosaurus’ stature as the most commonly known of the herbivores, this toy featured sharp little teeth that were often involved in dares. Many of my friends’ fingers probably have little indentions in them to this day. 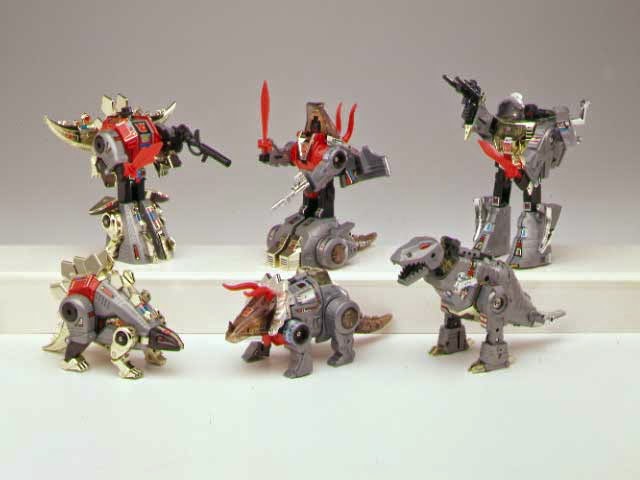 I guess the next significant dinosaur toys were the Dinobots. Like any good 80s kid I love Transformers, but they were never my thing. While I was a great kid and did get a lot of toys, there were limits. I got to pursue one toy line at a time full-on, with occasional pickups from other lines. So I had a few key Transformers – Prime, Megatron, Bumblebee. But when the Dinobots came out I lost my little mind. I wanted all of them. I think I got Grimlock for Christmas one year and I know I had Swoop. I wore that Grimlock the heck out. I don’t know exactly when I lost that Grimlock, but I remember that his parts were just flopping around from being played with so much.

Let me rephrase that.

All of the joints were very loose from being transformed so many times.

Grimlock was one of the best of the G1 Transformers. Both modes looked great and he had the little sticker that revealed his allegiance when you rubbed it with your finger. He was one of the few Transformers at the time that was like a fully articulated action figure rather than just a robot with limited articulation. Swoop wasn’t as exciting, but the Dinobots as a group were so good that the next iteration of Transformers – Best Wars – all turned into animals. I don’t actually know that the Dinobots specifically influenced that, but they did set the trend of robots that transformed into something other than mechanical stuff.

In 1988 Tyco released the Dino Riders – the best dinosaur toy line there is, was, or likely ever will be.

I was 12 when the Dino Riders hit and in my parents’ view getting too old for toys. I remember walking through Richway and Lionel Playworld and seeing those boxes with the wild images of humans and aliens riding these amazingly accurate dinosaurs that had been weaponized with futuristic technology. It was dinosaurs, science fiction, and aliens all wrapped up in one franchise. You can read more about it in Kalan’s Best Cartoon Ever (of the Month) about the Dino Riders cartoon series.

I honestly can’t remember how, but I ended up with some Dino Riders toys. It always bothered me when stuff wasn’t the same scale as GI Joe. Dino Riders were significantly smaller than Joes. This was to allow for the dinosaurs, as Joe-scaled dinosaurs would have cost a fortune. I might put together a whole different post about action figure scale in the 80s. But the Dino Riders were still great little figures. They had good articulation and great sculpt and paint jobs. And the dinosaurs were fantastic.
They key to the dinosaurs was that the armor and weapons could be removed entirely, leaving the dinosaurs mostly unmarked. There were no bits of machinery or huge peg holes left behind to accommodate the additions. The guys who designed this line understood that they needed to be dinosaur toys, too.

I strongly recommend you go to DinoRidersWorld.com right now and check out this amazing website's database of Dino Riders toys, cartoons, print ads, and more! 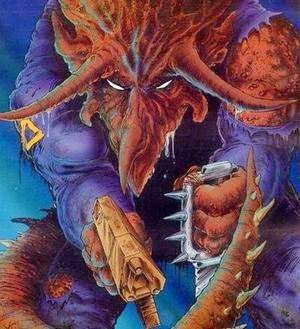 I think the last great dinosaur love of my life were the Triceratons from Kevin Eastman and Peter Laird’s Teenage Mutant Ninja Turtles. I loved that race of alien warriors and was thrilled when Playmates released a pretty good Triceraton action figure. I bought four of them and customized each one to look different so that I could have a squad of them. My favorite Triceraton story was about the Turtles finding an insane Triceraton wandering around in the sewers, leftover from the attempted invasion. It’s a really heart-rending tale and one of those that has just stuck with me ever since I read it. I’m still holding out hope that we’ll see a live action Triceraton in a movie one day.

Side Note: Yes, Ninja Turtles toys came after Dino Riders. I mostly collected Ninja Turtles on the sly and used my own money to buy them.

Of course, Stephen Spielberg’s adaptation of Michael Crichton’s Jurassic Park launched a whole new dinosaur era. If you weren’t there you cannot even understand how much dinosaur merchandise was around. Dinosaurs were everywhere. I’d have to sit down and really think about it, but I’m pretty sure that Jurassic Park is one of the biggest phenomenon of my lifetime. Avatar had nothing on it.

And yes – of course there was a toy line.

By that time I was fully out of toys and as much as I loved Crichton’s novel and the movie, dinosaur toys were not in my budget. Luckily I had a little sister. And she was crazy insane-o for all things Jurassic Park. She had all of the toys and they are, quite frankly, some of the best designed toys I have ever seen. I think they are often overlooked due to their connection to a huge Hollywood franchise, but the Jurassic Park dinosaurs were outstanding. The larger toys featured rubber skin over armatures and had this great feel to them. They also featured the most gruesome thing I have ever seen on a toy – removable bite marks! The dinosaurs had jagged wounds in them with exposed muscle. There were rubber plugs in the shapes of the wounds that could be removed to simulate damage.

It was totally gross and awesome.

The smaller ones were just plastic, but all had cool action features that didn’t interfere with the aesthetics. The accompanying human figures were boring and nobody cares about them. Not even the Jeff Goldblum one.

My mom may have given away most of my toys and let the rest fall into ruin, but she managed to hang onto all of my sister’s stuff. Probably because she’s afraid of her. Because of this, we got to play with all of the old Jurassic Park dinosaurs last time we visited my parents. They’re still excellent toys. So much so, in fact, that Hasbro has launched a small selection of new Jurassic Park dinosaurs as insanely overpriced Toys R Us Exclusives. They have the same features as the originals, with some minor improvements. If they weren’t so expensive I would have bought them all.

And now we’ve come full circle with Fisher-Price’s Imaginext line of dinosaur toys that are exactly like Dino Riders:

These came out a few years ago and believe me when I tell you that Lil’ Troublemaker got every single one of them between his birthday and Christmas. And they’re awesome. Just like the old Dino riders, the dinosaurs are mostly free of clutter and become regular old dinosaur toys when you remove the armor pieces. Unlike Dino Riders, the Imaginext figures are the same scale as all other Imaginext toys, which means they can interact with DC superheroes, Spongebob, Toys Story, and any other figures that are under the Imaginext banner.

I guess that’s about it. Lil’ Troublemaker hasn’t shown a particular affinity for dinosaurs yet. He’s way more into superheroes and Ninja Turtles. Maybe we’ll get a new Triceraton.
Posted by Phantom Troublemaker at 11:00:00 AM

Email ThisBlogThis!Share to TwitterShare to FacebookShare to Pinterest
Labels: dinosaurs, tales from the troublemaker