Comics and Me by Robert McIntyre 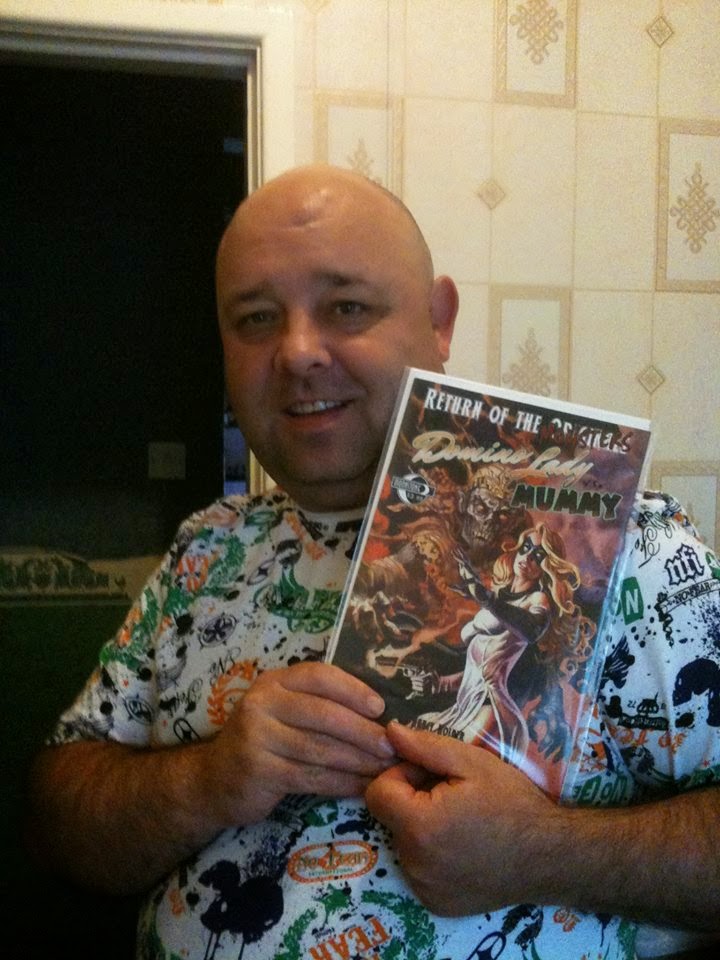 To understand my love - and what is sometimes an obsession - for all things comic related, you have to understand what originally steered me in the direction of that wonderful world.

I was born with a pulmonary valve defect commonly known as a hole in the heart, which in 1961 was something of a big deal. Back then there wasn’t the understanding or the technology available to repair my heart. My parents were told to expect the worst and that I would probably not live very long. As you can tell from the fact that I am writing this - doctors aren’t always right. After spending my first 9 months in intensive care my parents were allowed to take me home. Now, during the rest of my formative years my parents did something very special for me - they took the decision to let me lead a normal life. Which, looking back cannot have been an easy decision for them to make. But make it they did, so I went out and played with the rest of the kids on the street - running around, climbing trees, and kicking footballs. There were, however, days when my body said, “you can’t do that today; you need to rest”, they were my “know your limit” days and my parents made sure I recognised those days from a very early age. On those days while the other kids were running around outside having fun, I would be in the house reading comics which my mother had bought especially for those days. It not only kept me occupied so I wasn’t under her feet, it was also helping me read and it’s where I believe my passion and love of comics came from.

As a youngster I would read a wide range of comics. In fact, I would read anything I could get my hands on, ranging from the war stories of Commando to the funny comics of The Dandy and Beano. If I was really lucky I would get my hands on comics that had come from America, comics that were full of stories about heroes with fantastic abilities and who saved the world time and time again. The fact that I could hold something in my hands that originated from that far away was the most exciting thing I could ever imagine at that time in my life, and a trip to the local newsagent’s spinner rack to see what they had was a must whenever I went on shopping trips with my mum. Batman, Thor, Doctor Strange, Spider-Man and the Fantastic 4 all played a big part in my early comic book years, I would read them in any order I could because in those days you got what you could when you could. Looking back I don’t think I ever read a full story arc from start to finish, in the correct order it was originally printed but it never stopped the enjoyment I felt reading each issue.

In our village there was a second-hand book store on our local market that also had boxes of comics for sale. Every Saturday I would take my weekly pocket money and buy as many comic books as I could. You would also get money off the next set of comics you bought if you took your comics back once you had read them, so any comics I didn’t want to keep were handed back as payment for more comics to read. It was on this market store where I came across Vampirella - the most erotic comic I had ever seen (well it seemed it at the time). I still remember putting it under my jumper as I went in the house then running it upstairs and reading it in my room. The story was “Death's Dark Angel” and over the months it was read to death. To make sure no one knew I had it I stored it safely under my bed. We all know parents never find anything under kids beds, right?
During a clean-up of my room my precious Vampirella comic was found and it was taken from me by a very disappointed father. I was banned from reading any comics for a week which at the time I thought was a bit harsh and still do to be honest. I also had to show my mum or dad what I had bought every time I went to the market, and my dad would occasionally frisk me just in case I chanced my arm and was hiding another issue.
Apart from the Vampirella comic - which I held on to for what are now very obvious reasons - I also held on to any Batman comics I could get my hands on. I grew up watching Batman on TV and thought it was the best thing I had ever seen. I was fascinated to see this comic book character as a real person running around in glorious black & white on our massive 12 inch TV screen. The fact that it was camp and over the top was totally lost on me. Hell, I didn’t even know that Cesar Romero had a moustache that he whitened out when he played the Joker. Even if I had it wouldn’t have mattered to me. The show was fantastic; it was live action Batman and you couldn’t get better than that.

On one of our many trips to the shops with my mother I saw the poster for the Adam West Batman film proudly displayed on our cinema wall. I rushed home with all the excitement only a child could have after seeing a poster for the best film ever. I excitedly told my dad about the film adding can we go to see it, having no doubt in my mind he would pick up his coat and we would head straight out to see Batman not only on a big screen but in colour. Thinking back as I write this I can still feel the pain as I sat and cried my eyes out for hours when he said no, adding” I have better things to spend my money on than that rubbish”. It was years before I saw the film on TV, and yes by todays standards it was rubbish, but to me it’s as good as any of the CGI enhanced films we have today. Except for the shark scene perhaps.

As I got older I still read comics as much as I could but not as much as I wanted to. Money and a family all took priority on any spare cash I had and quite rightly so. Then in 1989 a new Batman film starring Michael Keaton & Jack Nicholson was released and my childhood came flooding back to me. This time I ran home from work to ask my wife if we could go and there was no crying for me this time as she threw on her coat and said ‘’Let’s go see it’’. To be honest she probably rolled her eyes and said ‘’If you can get a babysitter and buy me popcorn, why not?’’ My wife Helen doesn’t share my love of comics but she has always been supportive of what can sometimes be an obsession.

After that date the floodgates opened and I again began buying comics, as well as any comic related stuff I could get my hands on. Today I have a whole room (my son grew up) full of comic boxes, statues, action figures, and original artwork. I am now into my 52nd year and I still have the love and enthusiasm for the comic medium I had when I was a small child all those years ago. To be honest I’m showing no signs of losing that love anytime soon and long may that continue.

On a final note by the time the mid 70’s arrived medical science had advanced enough to correct my heart defect, so as long as I follow the “know your limits” advice I was given as a youngster I should live to a ripe old age. Trouble is, I’m not as good at following that advice as I once was.