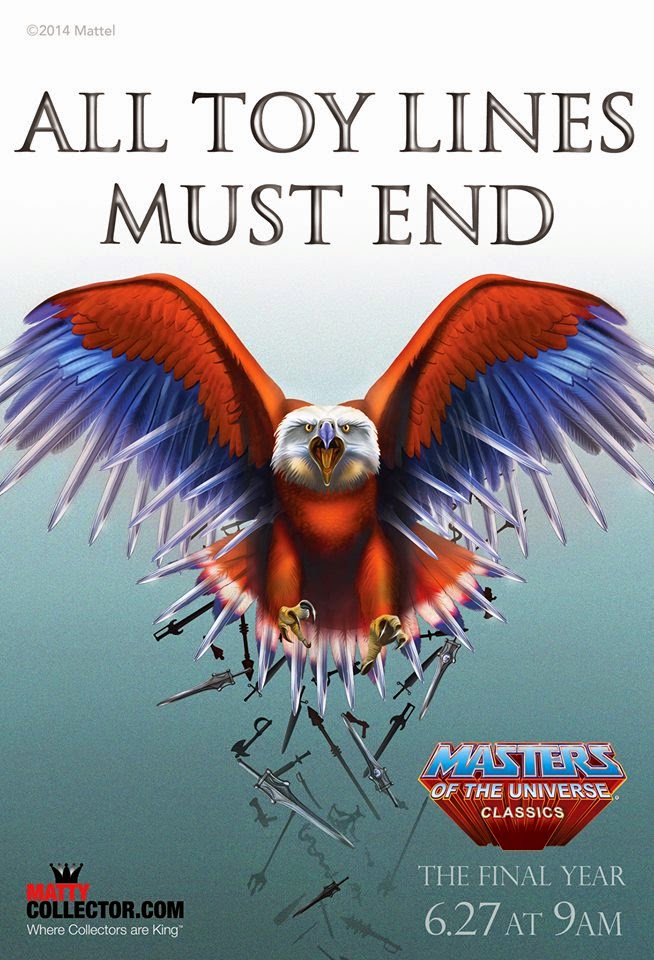 A few days ago the following message was posted on MattyCollector.com. This was following the release of the above ominous image on Matty’s Facebook page.

This post does not specifically describe 2015 as the final year of Masters of the Universe Classics. It does, however, outline some interesting things about the 2015 Club Eternia subscription, which goes on sale starting today. My reactions are notated in purple.

I don’t know who Tara is, but her announcements are even more disappointing and bullshitty than Scott Nietlich’s.

MOTUC fans… it’s that time of year! We’re gearing up to open subscriptions for the 2015 Masters of the Universe® Classics Club Eternia®. We’ve got all the important dates and info, so if you haven’t subscribed before or just want a refresher on the basics, here’s what you’ll need to know.

This post does not present any important info other than the fact that when subs open there will be no info. It does provide dates, though. 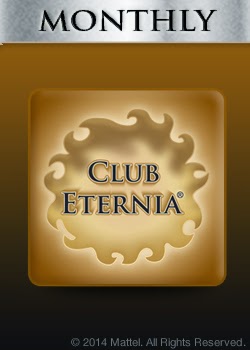 When subscriptions become available on 6/27, we’ll have all the details except the name of the club-exclusive figure; we always reveal it along with the first quarter figures at our Mattypalooza Fan Panel at San Diego Comic-Con. Remember, club subscribers receive Early Access to non-subscription products during our monthly sales, a choice of monthly or quarterly shipping options, and other great benefits.

“All the details”? It says right there that on 6/27 no figures will be revealed. I understand that they will reveal the number and prices of the figures, but nobody gives a shit about that. There’s not one year where the number of figures being offered would have changed my decision on whether or not to order. What I want to know is what figures are being offered. I also understand that once the sub Exclusive and the first four or five figures are revealed we still won’t have any indication as to how exciting the rest of the year is going to be, but Mattel needs to light that fire at the beginning and rope us in.

I will give Matty credit for the Early Access benefit. It has been especially useful this year with the DC Universe figures and the Mini Masters. So I can’t even argue about this one. As far as “other great benefits”… I guess maybe they’re talking about that crappy Skeletor baby?

You’ll want to make sure you subscribe early this year for a couple of reasons… first, not only will subscribers receive all Club benefits, including the monthly figures and variants, choice of shipping options and Early Access, but subscribers who sign up before Friday, 7/25 at 11:59 a.m. will get a free display stand set! And second, this year subscriptions are limited to a set number, and once we hit that amount, that’s it… no more subscriptions will be sold.

A FREE DISPLAY STAND SET! And all I have to do is commit to spending hundreds of dollars, sight unseen, on a bunch of action figures that I may not even want? SIGN ME UP!
I do not believe for one second that Matty will limit the number of subscriptions. That statement goes against everything that Scott Nietlich has ever said to us. There is no profitable business model where it would make sense to limit the number of figures being produced. Now, if they were selling as many subs as they possibly could but not producing any figures beyond the sub numbers I would understand. It still wouldn’t totally make sense, but I suppose it would at least free up costly warehouse space.

The all-knowing, all-seeing Kowl™ will track the progress as we head toward the subscription limit. We’ll update the Kowlometer twice a week when Early Availability opens on 6/27 but why risk it? Subscribe early and make sure you get a subscription!

So this time around Matty is willing specify when and how they will be updating their sale thermometer, simply because it suits their new scare tactic. Nice.
What do you want to bet the Kowlometer stops just shy of topping out?

Mattel won’t be attending NYCC this year so we’ll have extra Goat Man™ figures for sale at SDCC! Beast Man® commands you to stop by the Mattel booth and pick up his obedient servant Klacky, this year’s traveling convention figure.

I’m thrilled that I was able to order a Goat-Man when me, Monkey, and Evil put in our SDCC order. I also ordered the Arkham Knights Batmobile because I have no self-control and the DC Cyborg figure for Lil’ Troublemaker. Mrs. Troublemaker wanted the Ever After High doll (she collects the Monster High stuff), but it sold out in about four seconds.

There’s plenty more to come so check back often. Want an email reminder when sales are about to start? Click here to register. Or, join me on Facebook, Twitter and in our Fan Forums and you’ll get reminders there, too.

I do want to make it clear that I am not arguing against Matty starting sub sales early or against them waiting until SDCC to make their first figure reveals. There are people that are going to subscribe right away for various reasons. But I think there are other, more effective approaches Matty could have taken to hype up the beginning of sub sales.

I am not one of those people that is going to subscribe right away. I might be dumb enough to have bought one of their $85 Batmobiles (more later on why that was so stupid), but I do have enough self-awareness to know that I don’t want to just jump into the final year of their Masters of the Universe Classics line. Matty had already kind of lost me with this line. I talk about it a little more in the Blade review I’m working on now - I think I’m just burned out. A lot of the figures are still great, but I think I’m less tolerant of the characters that I don’t really care about than I used to be. You probably haven’t noticed this, but Masters of the Universe Classics reviews have been few and far between this year. I haven’t been all that excited about reviewing that same buck over and over again; regardless of what head is on it.

My point here is that Matty is really going to have to have some blockbuster reveals at San Diego Comic Con to convince me to subscribe next year. And they probably will. I know that there’s a good chance that Matty will have nothing but cool figures that I want for the first quarter of 2015. And if they’re appealing enough I will subscribe again despite the fact that I might end up with a bunch of less desirable figures towards the end of the year. I’ve even lost faith in the once-reliable sub Exclusive figure after this year’s disappointing release. I know some folks liked the Unnamed One; I didn’t. I would have preferred another He-Man variation like Oo-Larr.

Email ThisBlogThis!Share to TwitterShare to FacebookShare to Pinterest
Labels: action figures, Masters of the Universe, masters of the universe classics, mattel, MattyCollector.com, toys