The other day I wrote a thing about playsets that was supposed to be sort of nostalgic and fun. I mentioned some favorite playsets from my childhood. The plan was to lead into a list of playsets that I would want to see now. Instead, I tapered off into a depressing reminiscence of my parents and old toys. I never made it to the new playsets thing because I had to stop writing before I threw myself off a cliff.

But today I will stay on track! I am older and wiser and won’t spend any more time looking at the past! Unless I need to do a post on old toys or something.


So the point the other day was that I miss playsets and it’s pretty much all Walmart’s fault that we don’t have them anymore. Well, Walmart and Saudi Arabia, but I don’t get political so let’s just say Walmart. The toy manufacturers blame shelf space and rising oil costs, but I’m not sure I buy that. For example – my son owns approximately 4,392 playsets. From Batcaves to airports to castles to Green Lantern outposts. And they’re great. So you’re telling me that Imaginext (a Mattel brand) can produce eight thousand playsets a year, but the same company can’t make one larger scale Batcave? Or that Hasbro can’t produce a new Death Star? Or a Star Destroyer at least?

I’m sure there are a lot more factors at play that I couldn’t even begin to understand, but quite frankly I don’t give a damn because I WANT SOME PLAYSETS.

Look, Playmates released the huge Teenage Mutant Ninja Turtles Secret Sewer Lair last year. It sold so well that Toys R Us was practically scalping them for a while, raising the price from the $79.99 MSRP to as high as $159.99. Because they’re fuckers.

Mattel released Castle Grayskull last year, and while I have no idea how successful that was and certainly never will, it was three hundred dollars and people bought it.

So I want some more playsets. And I’m going to write about which ones I want because why not? Today’s post will be about which playsets I would most like to have for the toy lines I currently collect, or possibly ones that would compel me to collect a line that I do not. I’m not sure because I haven’t actually started writing yet. Although if that classic TARDIS playset from Bif!Bang!Pow! didn’t compel me to collect their Doctor Who line, I don’t know what else could make me start buying toys. Well, yeah I do:

If Funko produced a Serenity playset in the ReAction line that was at least the scale of Kenner’s old Millennium Falcon or Star Destroyer I would buy the whole line. It could even be the size of the Death Star if I wanted to get really crazy. The bottom level (trash compactor) could be the cargo bay with the Mule inside. The middle levels could be the dining hall and maybe a room or two or the medical bay. The top level would be the cockpit. I can picture all of this so clearly. Man, it would be awesome. 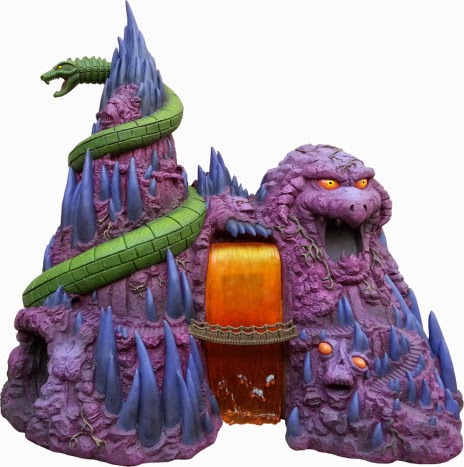 Masters of the Universe Classics Snake Mountain Playset from Mattel

This would be the one set I would choose if I could have any one on the list. Even though MOTU isn’t my favorite thing, I have a Grayskull and I feel some obligation to own a Snake Mountain. Especially if it could look even half as good as the one in that picture, which is the statue from Icon Heroes. Of course, the real problem with producing a Snake Mountain is that it would not end there. Sure, you’d have a home for Skeletor and his goons. But since Grayskull is not actually where He-Man and the Masters live you’d need an Eternos Palace as well. And a Fright Zone for the Horde. Personally, I’d prefer the Fright Zone as depicted on the TV show as opposed to the weird playset with the tree. We’d also need some kind of cave for the Snake Men. Maybe that could be an updated version of that old Fright Zone. I dunno. The real problem is that we’re talking about almost a thousand dollars’ worth of playsets here. Let’s move on. 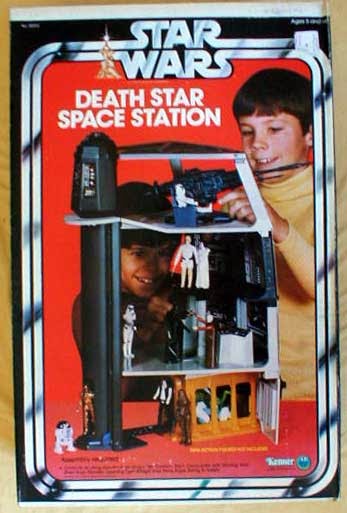 I can live without a new Ewok village. I can get by without a Star Destroyer or a Jedi Temple or the Alliance Base on Hoth or even Cloud City. But I hunger for a new Death Star playset. When I first started thinking about modular playsets that would be sold in pieces, this was why. Heck, they almost did it when they revived the line in the 90s. There were box sets that were scenes from within the Death Star. They came with figures and a plastic diorama background. I don’t think they connected in any significant playset way, but it was something.

But what I want is rooms that connect and stack and unfold to put together a massive Death Star. One that would make the new Castle Grayskull look wimpy. I don’t even care if the walls are cardboard like the Doctor Who TARDIS playset, printed cardboard can look really good now.
The features would include:
Of course, this is all absolutely ridiculous. Even with my concessions to cardboard and vinyl there’s no way this will ever happen. 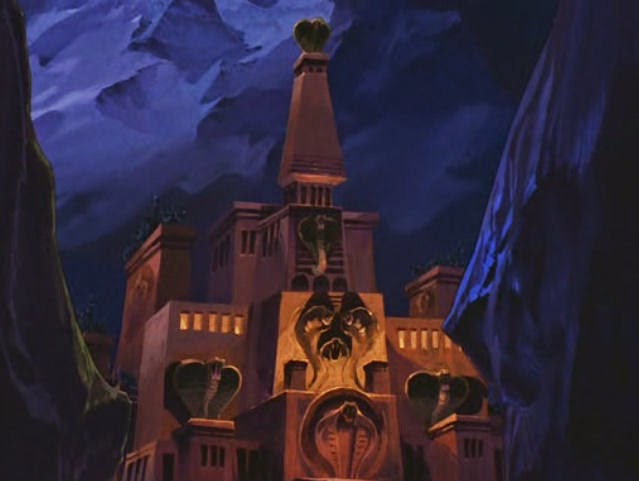 The Terrordrome was great, but what we all really wanted was that castle from the first miniseries. That’s what I wanted, anyway. This playset would have a hangar, the Arena of Sport, a commissary, the throne room, a dungeon, a laboratory, and a firing range. It would include figures of the giant slave guy and the slave girl that gives Duke the magic gum wrapper. I guess you’d have to throw a Cobra Commander in there, too – one with a cape. And the Destro with the robe on. Oh – and blue Baroness. And her assistant with no pants.
The exterior would feature a snake bay big enough to park a FANG or a CLAW in at the top. The front would have a couple of the snakes to read handprints and a sliding door. 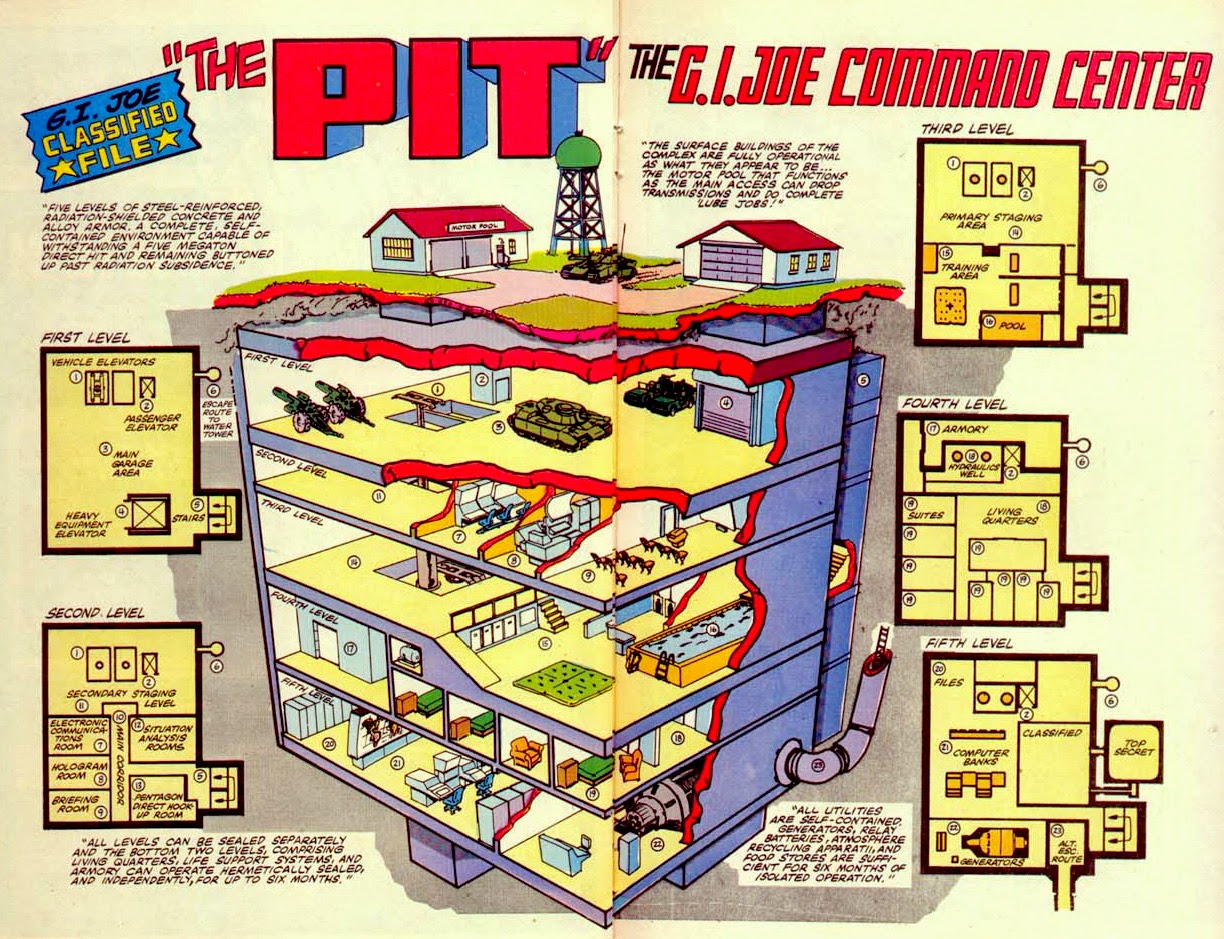 This would be similar to the Death Star, except that it would only consist of two different sets – one 12”x12” room and one 6”x6” room. The figures would come with accessories to fill the rooms – bunks, lockers, computers, medical equipment, gun racks. It may sound kind of crazy, but the last few series of Joe figures have come with TONS of accessories, some of them quite large. It would be easy to replace the Ninja Mountain Climbing Gear with a rack of tools to work on the VAMP or something. The new line of vehicles would be modular as well. This has been done before, with cannons and missile launchers that were interchangeable. Those pieces could be used for the PIT. 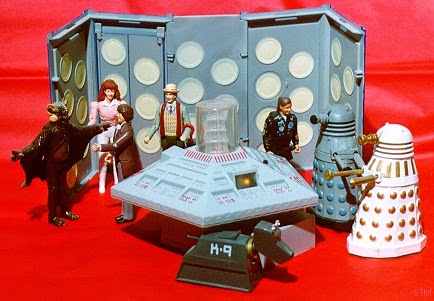 This is a rare case where a simple update of an old playset would be great. Dapol made what was essentially the greatest TARDIS playset ever. It was a TARDIS police box that unfolded into the control room. It was quite brilliant and could easily be copied today. I would be fine with just a playset of the control room that didn’t unfold from the exterior, but I think given the smaller size of the classic control room it could be done. The console would need to light up, make noise, and move up and down. As much as I like the Eleventh Doctor TARDIS playset I own, I was severely disappointed that the console didn’t do anything.
Of course, we’d also need the alternate control room – the Jules Verne-looking one.

I would have loved to have drawings of concepts for all of these, and if somebody would like to pay me to do so I will. As is I only got really inspired to do one of them: 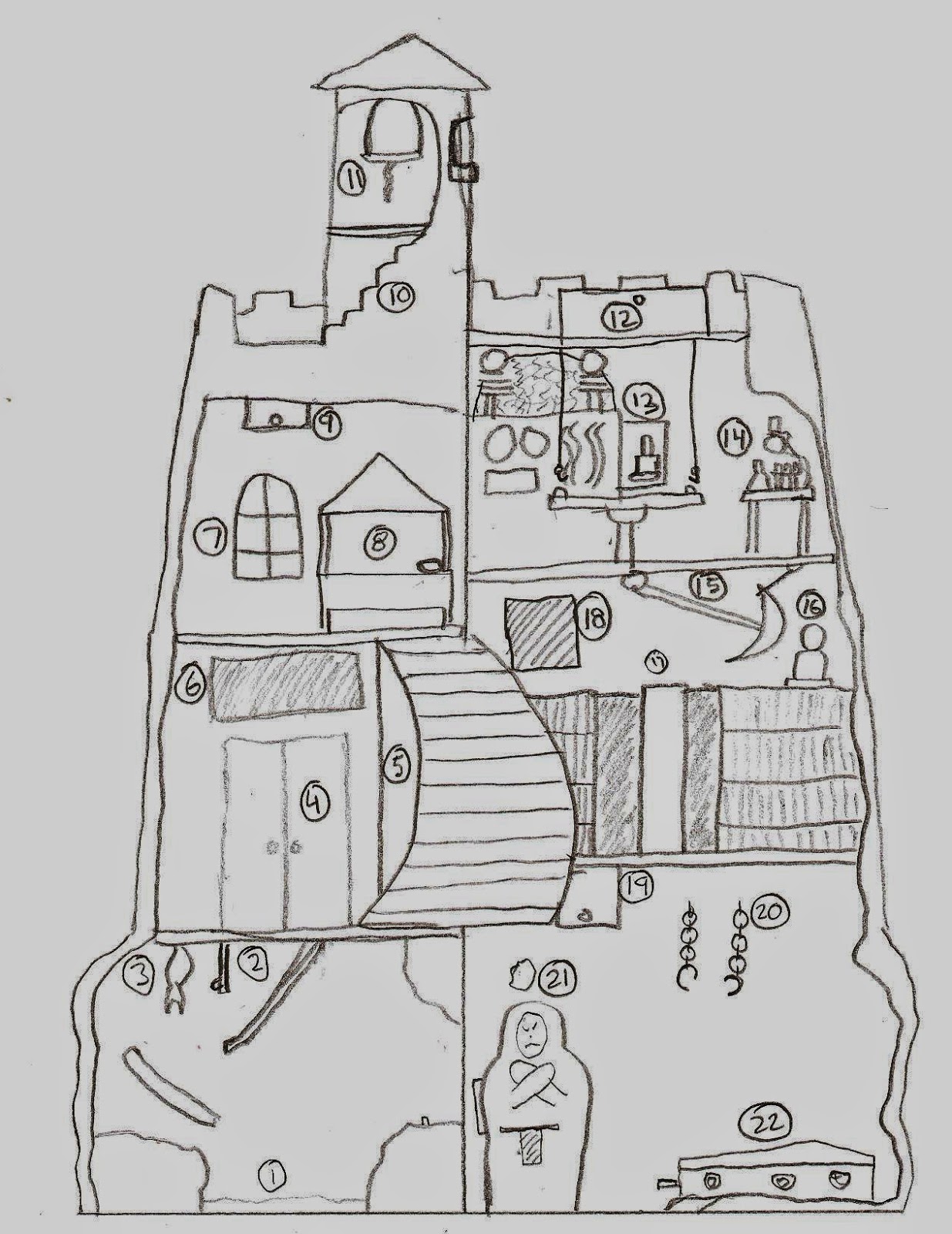 This is a total pipe dream, yet something that seems totally reasonable to me. It would be a big, plastic castle with rooms for the various Monsters. The layout would be very similar to Castle Grayskull, in that it would be a castle that opened up into two halves. One side would have the Mummy’s tomb on the bottom, Dracula’s staircase in the middle, and a bedroom on top; there would be a spire above that with a little room in it for the Hunchback. The other side would have the Gill Man’s cave on the bottom, a library in the middle, and Doctor Frankenstein’s laboratory on the top. The laboratory would have a table that rises up through the roof. The roof itself would be a little walkway.

I was so excited about the idea of this one that I had to draw it. I am not a professional toy designer, so things like scale were not taken into consideration. I just wanted to see what was in my head. Here’s the key for the numbered circles above:
Some of this is taken from Grayskull, but all of it is just classic playset design.
The set would come with a few “victim” figures. Lucy Swann and the like. Maybe an Igor, too.

It would be great to have an electronic chip with sound effects for the bell and the doors, as well as various howls and screams or whatever. Doctor Frankenstein’s laboratory could light up and make noise. Heck, there could be little LEDs throughout the castle that flickered. But that would all be expensive and we’re trying to keep this as cheap as possible. Also, this is part of a retro line. If the sounds and whatnot can all be mechanisms rather than electronics it will feel a lot more legit.

I want this thing so fucking bad.