Best Cartoon Ever (of the Month) - Beetlejuice by Kalan 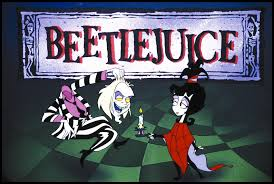 Greetings Ghouls and Goblins! I know it's been more than a month since we last gathered for cartoony goodness, but give a ghoul a break, I've been working and making a surprisingly successful attempt at a social life! That doesn't mean I've forgotten about you nor have I abandoned my love of all things animated. I've been watching cartoons that don't meet the criteria for this article – like a pallet cleanser of sorts.... for my brain. Thanks to the rather persistent nagging of everyone Phavorite Phantom and a renewed enthusiasm for cartoony reviewing, HERE WE GO AGAIN!
As of yet, I haven't featured a cartoon that I personally watched as a kid. Don't get me wrong, I always watched cartoons growing up, and they were awesome ones, but the ones I've featured so far were ones I missed the boat on – mostly because of my age. Hence my excitement for them was new to me more so than nostalgic. This feature toon, however, was one of the many toons that had a tremendous effect on my young brain. It is gross, it is full of puns and sight gags, and it basically set me on the path of my adult life and I didn't even realize it. I never missed this show when it was on and re-watching as an adult, I can definitely notice the damag- I mean influence it had. Like RoboCop, this month's feature was a movie first. I actually saw the cartoon way before I saw the movie – and honestly, I thought the movie came after the cartoon for many years. This show is excellent in its own right and there isn't a need to see the movie to enjoy it. Let's get on with it, shall we? This month's Best Cartoon Ever (of the Month) is none other than Beetlejuice! 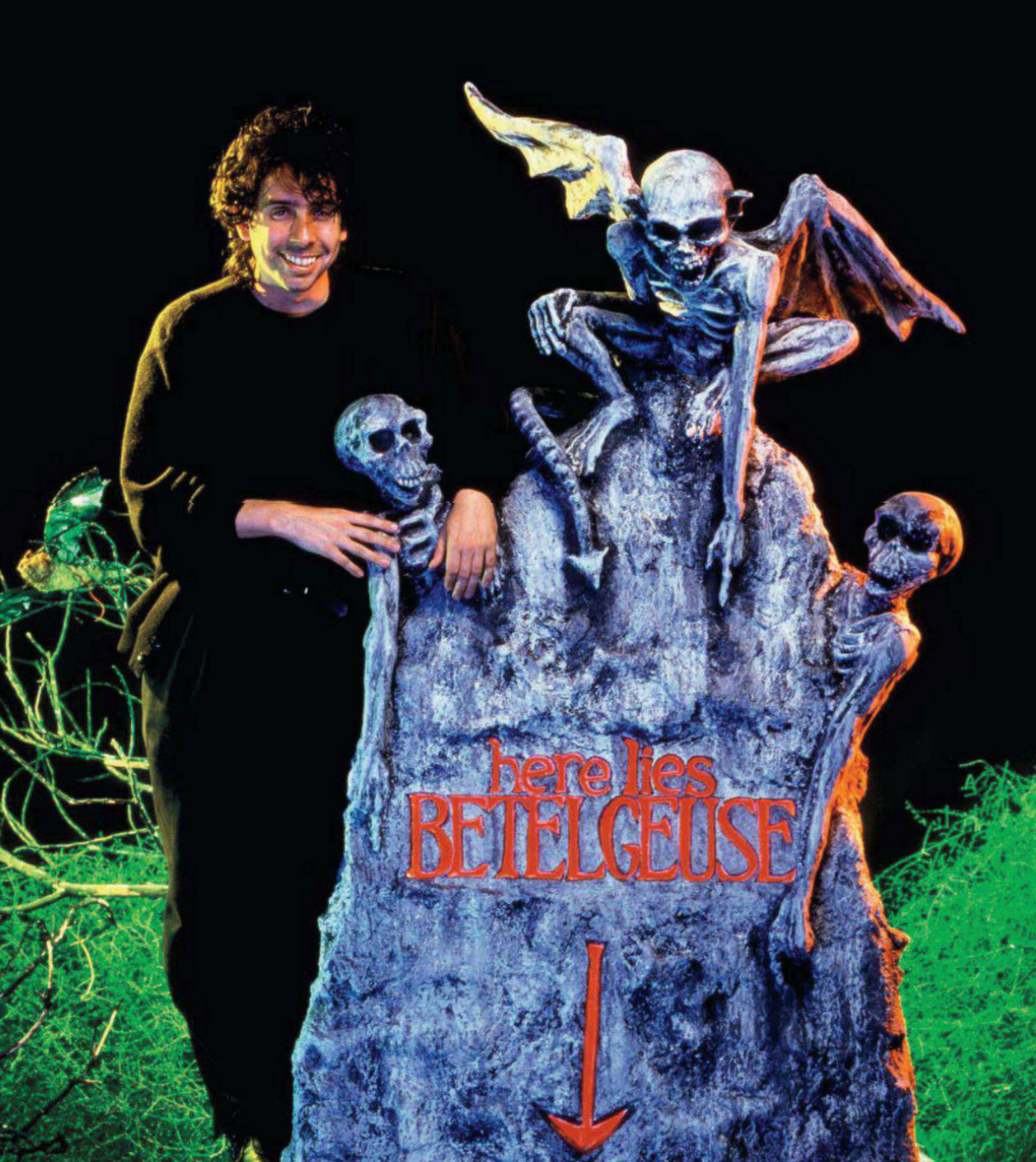 Luckily for us, Tim Burton was an executive producer and developer on the animated spin-off of his major motion picture, I'd say you can definitely tell his influence on the show. It's got some differences from the film version, as one would imagine, but what it lacks in after-worldly vulgarity it makes up for in shameless gags. I'm a huge sucker for puns and bad jokes, hence my rediscovered love for this show.
Beetlejuice had an excellent 4-season run from 1989 – 1991 with a total of 109 episodes. I picked up originally in the last season I'm guessing, since I would have been five, but it was in reruns then as well so as I'm going back and watching it I know a lot of the earlier three seasons.
Our voice cast is a slew of popular Canadian voice actors. Our ghost with the most is brought to us by Stephen Ouimette, our leading lady Lydia Deetz is Alyson Court. We have a special Monster Across the Street from Len Carlson and Tara Charendoff (Strong) brings us many of the female supporting characters, just to name a few. Ouimette and Court were both on the X-Men animated series – making their appearances as Archangel and Jubilee (ugh, Jubilee....). Many of the supporting voice actors have been in previously featured BCEotMs, I just don't have the time to list it all out for you, and obviously you have the internet so you can do your own research!
Danny Elfman composed the theme song, as is evident by it being absolutely amazing. Beetlejuice even won an Emmy in 1990 for Outstanding Animated Program (an understatement to say the least). The show aired initially on ABC on Saturday mornings, but was quickly picked up by Fox, airing throughout the week (which is where I did most of my viewing as a wee babe). It's re-aired on several different networks, has been released on VHS and DVD as well. 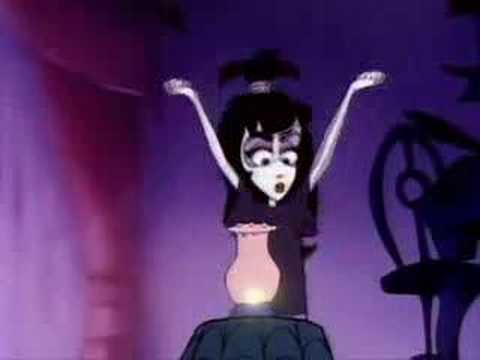 I really related to Lydia, finding myself constantly an “odd one out” in even those earliest of social situations. I tried many times reciting the poem that would transport her to the Neitherworld -


But alas to no avail. He never showed up to whisk me away from suburban mediocrity to the creepy cool realm I so badly wished to explore. Lydia was a character I think a lot of girls could relate to. Without going on some quasi-feminist tangent, she showed girls like me that it was okay to be unpopular or not the prettiest girl in school, that your personality and interests didn't have to be what everyone thought a girl should be interested in. Her friends, Prudence and Bertha weren't part of the cool crowd either, another thing I definitely picked up on even at such an early age. She also introduced me to a fascination in photography that sticks with me to this day. 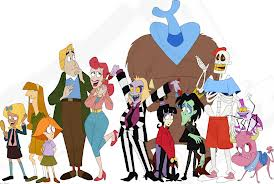 I personally prefer the first two seasons to the latter two. The first two seasons seemed to get away with more weird things than the later seasons attempted, which happens quite often with shows, animated or otherwise, that run for years. The show breaks the 4th wall more often in the later seasons, which is fine, I've no qualms with it in this case as it's always pretty appropriately done and doesn't interfere with the story.
The animation style for this toon is more nostalgic for me than some of the other shows I've featured. It's difficult to explain, but it “feels” (or I guess “looks” is more appropriate) like my childhood. It is quintessentially early 90s animation and I just love it. The scenery in both Peaceful Pines and the Neitherworld is amazing, though obviously I aesthetically prefer the Neitherworld. I love the cast of characters/creatures in this show. Ghouls, monsters, skeletons and various creepy dead people, what's not to love?!? My favorite supporting character was and still is the Monster Across the Street. 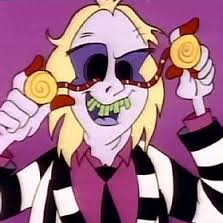 There is a lot to love about this show, and I highly recommend sharing it with your younger minions, sure beats the crap they're churning out for young viewers these days. - Shakes fist grumpily – You don't have to have seen the movie to enjoy this cartoon, but it's a great film that's also worth your while. If you happen across this series and have never seen it, or if it's been a while since you plopped down in front of it, you will most certainly be delighted with your viewing experience! If you're still on the fence, I'll leave you with a joke from the show that tickled my funny bone in hopes you'll give it a chance:
Q: What does a ghost call his mom and dad?
A: His Trans-Parents!

Email ThisBlogThis!Share to TwitterShare to FacebookShare to Pinterest
Labels: Beetlejuice, Best Cartoon Ever (of the Month), Kalan