As I’ve said before I’m not really an Avengers guy. Not as far as the comics are concerned, anyway. As a result, the number of stories I’ve read featuring A.I.M. are limited. But I’ve always loved the look of the A.I.M. soldiers. Because of that I bought two of these guys way back when I first saw the new Marvel Legends at Target.

Collecting the two new series of Marvel Legends – tied in to Captain America: The Winter Soldier and The Amazing Spider-Man 2 – has been mostly fun and just a little frustrating; which is kind of what toy collecting should be. I have finally managed to collect all of the figures I wanted from both lines:

Plus a couple I didn’t particularly want but ended up getting and liking:

And finally, my last acquisition, the extremely hard-to-find:

Obviously I have a lot of reviews left to write.

That’s thirteen total figures, plus the Mandroid and Ultimate Green Goblin build-a-figures (and a few extra parts for each). I passed on Baron Zemo and Boomerang. I already have a Baron Zemo and couldn’t justify paying fifteen bucks (the price the first time I found these) for a second one. Especially when I didn’t need the build-a-figure part (the same one came with the A.I.M. Soldier, who I had two of). I’ve passed on Boomerang a few times because I am not familiar with the character, but also because out of all of the various characters from Marvel and DC that are derivative of one another, this one is just ridiculous.
I tell you all of this now because I just don’t have that much to say about A.I.M. Soldiers.

These are probably the most eye-catching figures of the new series. The yellow practically screams at you from the peg, especially surrounded by the black packaging. These guys may have a mostly monochromatic color scheme, but their great profile makes them exciting to look at. And makes me want lots of them.
That probably isn’t going to happen. I haven’t seen a single one of these since I bought my pair.

I saw some of the older Hasbro Marvel Legends in a Marshall’s the other day and there is a huge difference in the visual effect of the packaging. The old simple blister on a cardback makes the figures look kind of cheap in comparison. If Hasbro wanted to jack the price on these up to $22.99 - which they are in Toys R Us – they had to come up with a fancier way to pack these.

The back features a fairly generic blurb about A.I.M. For some reason this reminded me that I never finished my M.O.D.O.K. build-a-figure. I can’t remember what I’m missing, but I’m sure it would cost me a fortune to get the parts. I think he’s from the Toy Biz days.

I was absolutely positive that we would see this body repurposed as a comic book Star Lord for the Guardians of the Galaxy Marvel Legends. Actually, I was pretty sure this was a Star Lord body being repurposed as an A.I.M. soldier. Preemptively. While this might still happen someday, for now it makes a pretty darn spiffy soldier of science.

The head – which was the most important piece of the figure, sculpt-wise – is perfect. It’s that wacky bucket shape that seems terribly impractical but looks somehow menacing. It’s sculpted to have a fabric look as opposed to being an armor piece. The… viewport? What would you call the thing they see out of? I dunno. Anyway, it’s sculpted to look like mesh, which is cool. I also love the side slots to allow for peripheral vision. I look at this helmet and I think there’s a reason for it to look that way that it does. Maybe it’s packed with high-tech equipment and that’s why it’s shaped so uniquely.

The torso is definitely the Guardians jacket that Rocket and Star Lord wear, but it works just fine for this character. In all yellow, the button-up panel on the front looks sort of like something a doctor or scientist would wear. The squared shoulders match up with the profile of the helmet. I appreciate the amount of detail put into the textures and the folds of the material.

The gloves have sculpted and painted buttons. I appreciate the detail and the fact that Hasbro put some paint on them, but this is one of the portions that don’t quite work with the aesthetics of this character. I would have preferred no buttons, but if there had to paint I think it should have been black. These buttons are the clearest indicator that these are Star Lord’s gloves. Also, they seem a little long. This guy’s arms hang just a bit low on his body for me. But maybe he has scientifically enhanced gorilla arms. I do like that both hands are sculpted to hold weapons of destruction, especially since the figure comes with two.

The waist piece is made specifically for this figure. It’s softer plastic with a design that looks like sort of a science cummerbund. This could easily be replaced with a piece that looked like a belted jacket bottom.

The bandolier is a separately sculpted piece that hangs nicely across the figure’s chest. It has a ton of detail and even features paint on the tops of the grenades and the snaps on the pouches.

The legs are just sculpted to look like trousers. Nothing special there. I mean, they look good with the same texture and attention to detail as the upper portions, but there’s just not much to say.

The boots are basically cowboy boots with buckles and straps, which seems super weird for a science soldier. These are the other things that don’t quite work. I would imagine something a bit more utilitarian. They look neat and are a good design, just not for these guys. But in all honesty I don’t care that much.

The paint job is pretty basic. The yellow is bright and solid because it’s the color of the plastic rather than being painted. The same goes for the black on the boots. The belt piece is black with yellow paint. It’s amazing that it looks good and matches the rest of the yellow on the figure. The silver parts are accurately placed and the paint is thick enough to look solid.


***BREAKING NEWS!***
You guys - I promise I didn't even plan this. I  had this review loaded and ready to go Tuesday night, but I had to update it with this: 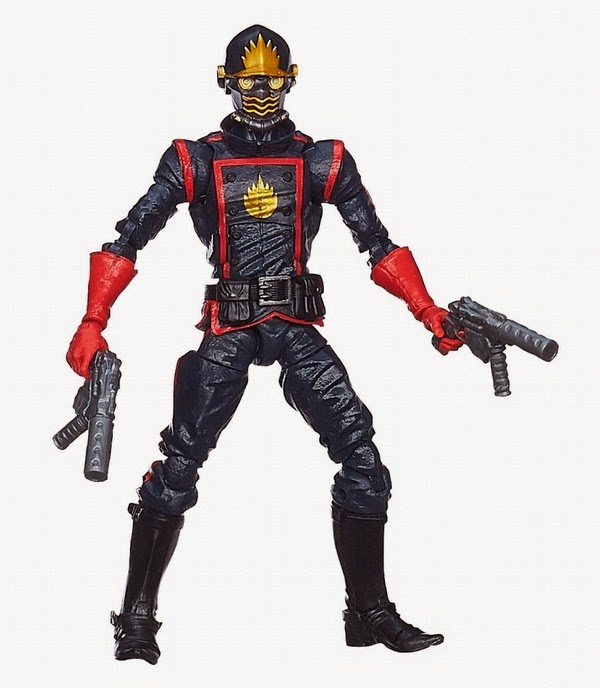 Yep. That's comic book Star Lord, exactly as I predicted. He was revealed yesterday. And I actually wrote this months ago. He's part of Hasbro's SDCC Exclusive Thanos Imperative box set, which you can read about on ToyNewsi.

Since this is an SDCC Exclusive set from Hasbro, there is absolutely no fucking way I will be able to get one. Which sucks, because I really want that Gladiator.

The A.I.M. soldier comes with Mandroid’s left arm, a rifle, and a pistol.

The rifle is a futuristic, two-grip thing with a ton of paint on it. I am hard-pressed to understand how this fifteen dollar action figure (at the time) can have so many accessories with so much paint on them when Mattel often can’t be bothered to put even one app on the accessories of their twenty-five dollar collector figures. Anyway, this thing looks awesome and can be held with both hands or one-handed.

The pistol shares aesthetics with the rifle. It has the same general shapes and paint scheme. It fits nicely in either hand, but since I have two A.I.M. guys, I’m going to have one with the rifle and one dual-wielding the pistols.

These guys are a lot of fun. They feature the height – so far – of Hasbro’s Marvel Legends articulation. The joints all look very nice and are integrated into the sculpt. They are all very functional and have great ranges of motion. These guys can squat, run, dance, or just stand there looking science-y.

This is a figure that is fun to pose and play with and also fun to look at. The two gun accessories are great and interact with the figure in a satisfying way, though I do kind of wish there was a way to holster the pistols or affix the rifle to the figure’s back.

This is a fantastic figure. While I’d prefer button-less gloves and different boots, those things really don’t matter. Overall this is a great representation of A.I.M.’s foot soldiers. And if Hasbro does end up using this buck for Star Lord than they’re even more ingenious for making such clever use of their resources.

If you can actually find these, I recommend you buy as many as you see. They’re great looking troops and if you actually own a M.O.D.O.K. then you owe it to your collection to surround him with a bunch of these guys.

Will these be available on Amazon for any price? I’m curious to see. Aside from World War II Cap, the only figure from this wave I’ve seen at retail recently was Baron Zemo. This and the Hydra Agent might be tough finds now. And I wanted another Hydra Agent.