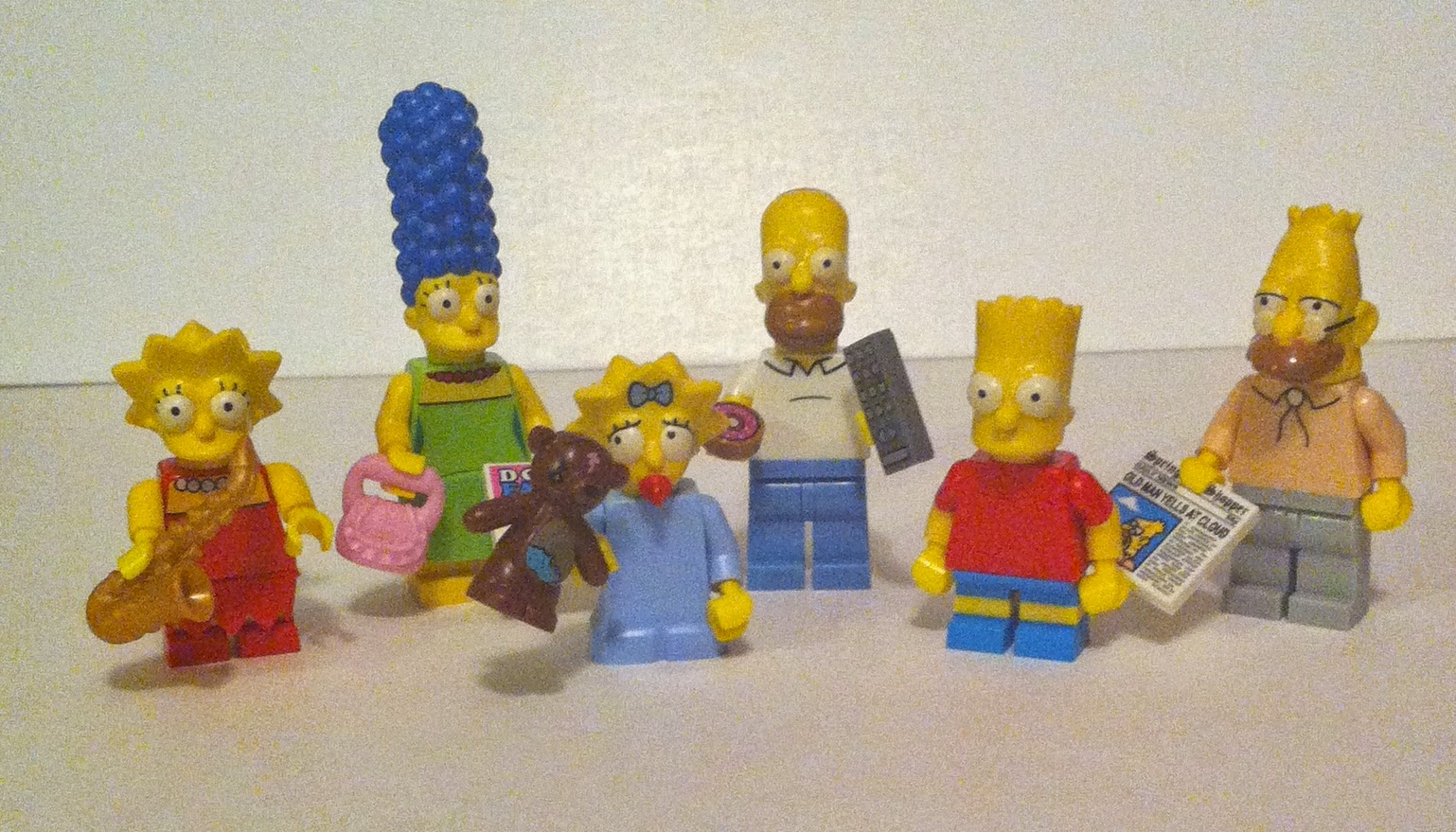 I remember finding out that series 13 of the very popular LEGO minifigures were going to be all Simpson characters. My feelings were mixed, up until this point every series before this were a mix of mostly generic characters. Series 12 was all characters from The Movie which did feature an Abe Lincoln and William Shakespeare. No Batman though, you gotta buy the playsets for that bad boy. In previous series you could find characters that looked like familiar faces such as Dr. Jekyll and Mr. Hyde or even a jazz player that looked like a blues brother but never licensed characters.


Before I get into the review, if you don't know what the minifigure craze is, here is a brief description.

Minifigures are the characters of the LEGO universe and they come in “blind packaging” which is where the item is inside a bag so you cannot see the contents so there is no way to tell which figure you are going to get. I remember when I discovered “blind packaging” I thought it was a stupid idea. I mean why in the hell would you buy something that you didn't even know what was inside? Well, then I sort of fell in love with LEGOs. More specifically, minifigures. Therefore I had to give into my feelings of the marketing strategy to sell people things they could possibly already have.

So for series 13, all 16 characters in the series would be residents from everybody's favorite town, Springfield. Quite frankly I wasn't all too excited when I found this out. I mean I love the Simpsons but it’s been a long time since I’ve sat down to watch new episodes or even reruns for that matter. I didn't see pictures for quite some time so I was curious how LEGO would put these characters into “LEGO form”.

All of the minifigures in previous series had the normal LEGO style heads but it was revealed that the Simpson characters would have heads that looked exactly like their animated counter parts. Which meant they would have a more 3D effect that minifigures typically do not have.

I thought this was an odd choice because I would have loved to see just the standard heads. Over the years though, LEGO has moved to changing the heads when necessary. Brands like TMNT & Spongebob Squarepants have paved the way to this change being more accepted among the community. Honestly though, after seeing these guys in person, I am very happy for the direction they chose to go with the head sculpts. They are exact replicas of their animated counter parts in minifigure land.

So onto the list of characters included in this set. Wow, I was blown away by how many of the popular characters they fit into this series. Most of the favorites are here for the picking. For this review I am going to name each character and then give brief thoughts on each of them.

Marge Simpson- Perfect, Cloth dress with good accessories with a donut fancy magazine and her purse.

Bart Simpson- Bart gets his own picture review, see below.

Maggie Simpson- This one is a bit of a miss for me because I think the look in her eyes is a bit odd. I know the look they are going for but it doesn’t quite work for me. She does come with her beat up bear Bobo.

Grampa Simpson- Perfect, comes with a newspaper with a hilarious headline.

Krusty The Clown- Perfect, comes with a pie.

Apu- Perfect, comes with none other than a Squishee.

Chief Wiggum- Near perfect although his body looks odd to me since his animated counterpart is a little bit on the bigger side. Comes with a megaphone and Billy club.

Mr. Burns- Absolutely perfect, the head sculpt is amazing on him! Comes with the Three Eyed Fish, Blinky & radiation bar.

And last but certainly not least!

Scratchy- Perfect, comes with an ax.

(These guys are a blast to play with & set up pictures with, definitely a must have for each of these.) 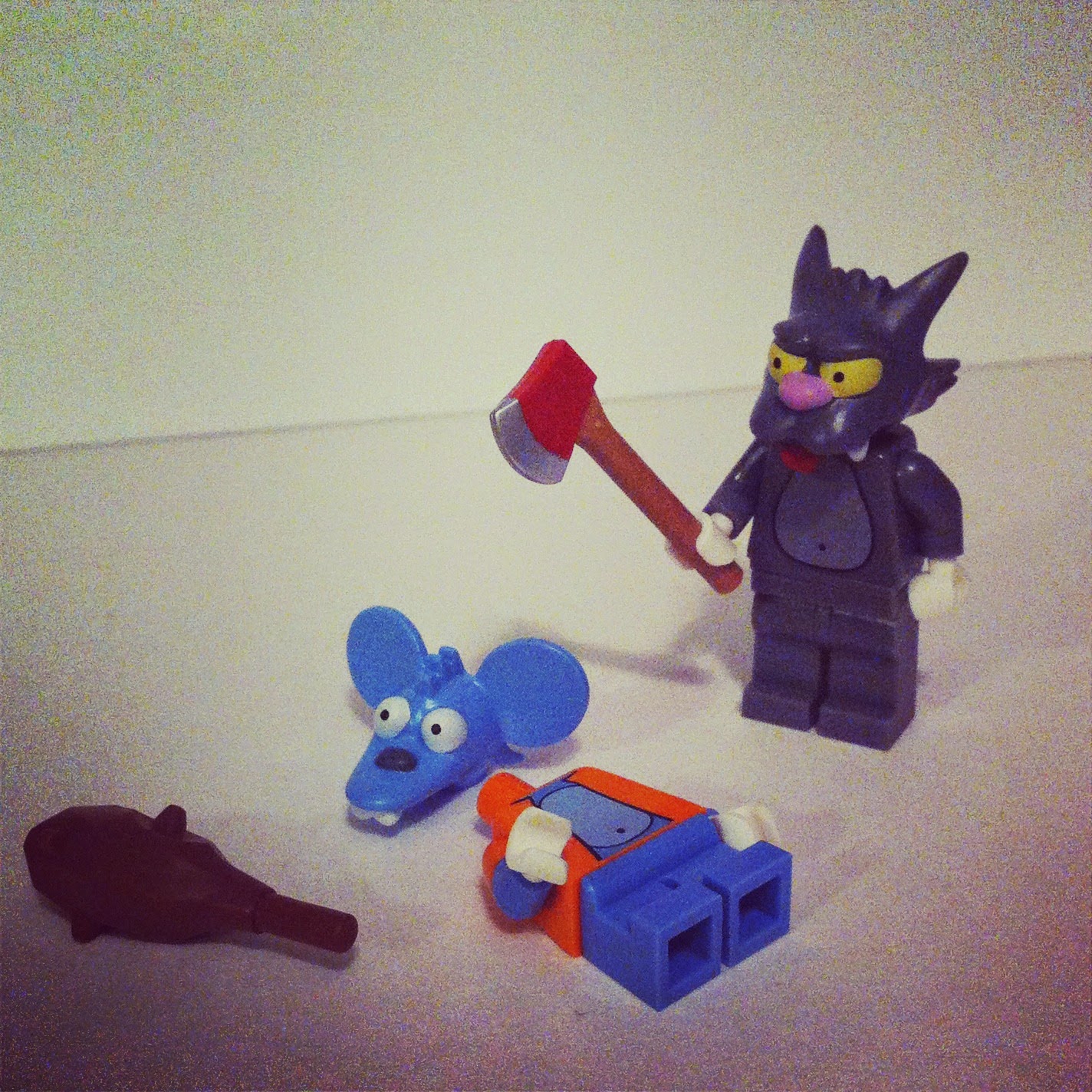 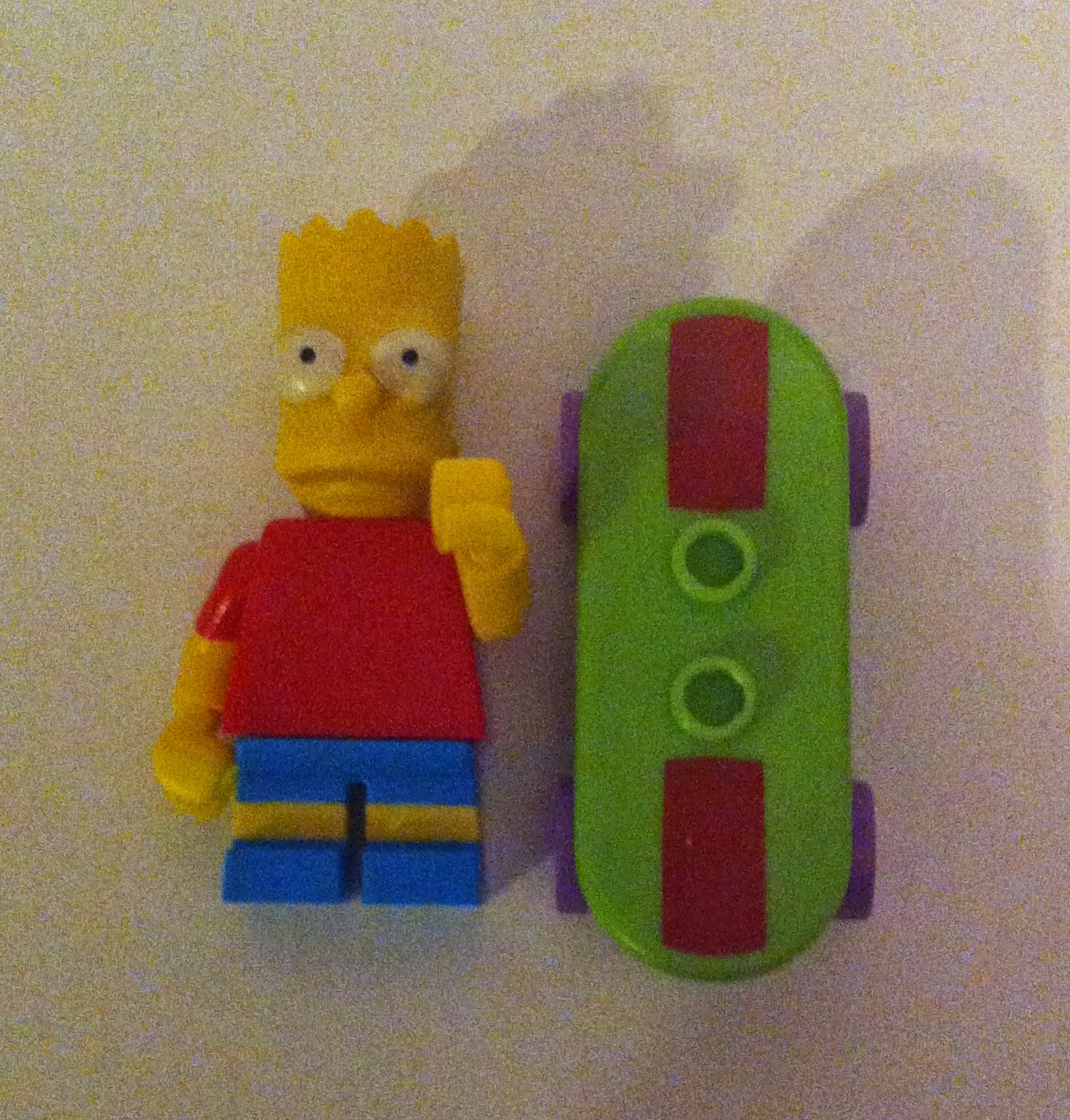 This minifigure has two major things wrong with it. I absolutely hate this skateboard, it’s the same skateboard that LEGO always uses but it’s so out of scale it looks goofy. The other negative is that Bart comes with a slingshot that’s just painted on to the back of his shorts. Boo. I would rather he have come with an actual slingshot than this oversized monster truck version of a skateboard.

Another downfall with this series is due to LEGO increasing its minifigure price from the standard 2.99 to 3.99. I am guessing this is because of the new head sculpts, but I think it’s a little high. That being said I still bought them all, along with being stuck with some extras so I guess their strategy worked on me. I have seen this series at both Walmart & Target since their release so you shouldn't have any trouble finding them.

Well, there you have it. A full review of series 13. If you are a fan or have ever been a fan of The Simpsons, this is an absolute must have series. As far as I know, this is the last LEGO Simpsons product to come out in 2014. In February, The Simpson's House was released which looks awesome but is over two hundred dollars so it might be a while before I get my hands on that one, if ever.

If I had a complaint about the character choice LEGO decided on it would be the lack of two figures. Mr. Smithers would look great beside my favorite of the series Mr. Burns. And I so badly want a Moe (along with a Moe's Tavern) and am saddened he wasn’t included.

I absolutely love this series but because LEGO dropped the ball on Bart and the price increase, I couldn't give it a perfect score. But it’s really close.