Also, I am sick and fucking tired of these figures breaking on me:

Yep. That’s Bucky’s damned arm lying on the ground.
I stuck him in the freezer overnight because his bicep swivel was stuck:

I took him out the next day and it was fine. Then I tried to move the shoulder joint and the arm broke right off. Now, this might have been partially my fault for not letting the figure warm up before messing around with it. If the peg on the bicep swivel hadn’t still been frozen and brittle it might not have snapped. Or at least would have had a little more flexibility. Still, this is another case of cheap plastics ruining the day. Inexcusable given how much more figures are costing.

I’m going to hang onto this guy and hope to find one at retail rather than bother with trying to return it to Amazon and hope that they have another in stock.

Like always, though, I will rate this figure based on its pre-break appearance. I don’t know how much longer I’ll keep doing it that way.

All I really know about Bucky is that he started off as an analog to Robin, he died, he came back as the Winter Soldier, he took over as Captain America when Steve Rogers “died”, and I don’t know what the heck he’s doing now. Did he die again?

Movie Bucky is a lot more palatable. He started off as not only Steve Roger’s best pal, but as a sort of big brother figure. He died in Captain America: The First Avenger, but I think we all knew he’d be back.

Except that we didn’t all know it.

I saw this posted on Facebook the other day: 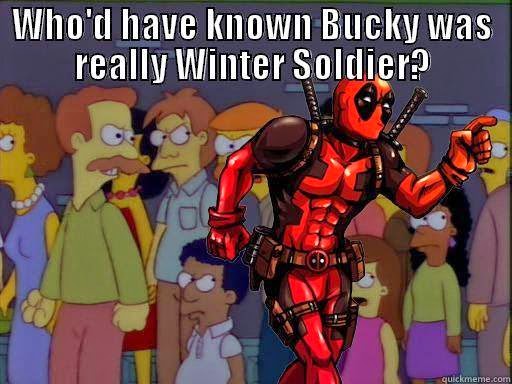 And thought it was funny but kind of dumb. I mean, who didn’t already know that Bucky was the Winter Soldier? Apparently lots of people, given the hissy fits I saw in response to the post. Don’t get me wrong – if I hadn’t known I would have been pissed and it would have been awesome if that had been a surprise when the mask came off and I had been like, “Holy shit! Is that Bucky!?!”

But I never even thought of that as a secret or surprise portion of the movie. Heck, I think Marvel even openly discussed Sebastian Stan’s role. As Bucky. Who is the Winter Soldier.

He’s a little more brown and drab than I expected. Aside from the wash on his cybernetic arm, there’s not a whole lot of paint here. I’m getting a little tired of buying figures that don’t look like they’re finished.

This is one of the pitfalls of doing toy reviews – what the heck else can I say about the new Marvel Legends box? I feel bad just cutting and pasting, but I also don’t want to drop packaging as a category because I feel it’s worth mentioning. Whatever. Glossy window, classy, blah-blah.

Not a bad blurb. “to haunt his present” makes me laugh a little, though.

I have to start with the fact that the lack of paint on some portions of this figure is obvious and ugly. The trousers, boots, and separate belted parts stand out as looking unfinished. Actually, I guess the trousers aren’t that bad. The knee pads are painted. The boots and the belts are what are really bugging me. With as many parts as there are on the boots, there should be at least a couple of different shades. And there was a cursory attempt to color some details on the belt on the waist, but it’s all so faint it doesn’t work.
What does work are the parts that do have paint.
The masked head looks great. The hair is a separate piece, so it has that hanging look that looks so much better than long hair that is part of the head sculpt. The mask is nicely detailed and actually looks more interesting than the movie version, which mostly read as all-black.

I can’t quite figure out what’s going on with the torso and right arm. The pictures I’ve seen make it look like the same garment, as does the sculpted detail on the figure. But the paint job on the torso and on the sleeve do no match up. It looks like a vest over a jacket. The torso sculpt is good and reminiscent of the comic book design. The arm sculpt is also nice and even features some weaponry on the forearm. The paint on the arm is fantastic, with detailing on the bullets or darts or whatever and a great, dark wash over the whole thing. If the same wash was on the torso this figure would look a whole lot better. The right hand is posed to hold a firearm and looks fine.

The left arm – one of the key parts of the figure – looks great. I mean, aside from the fact that it isn’t actually part of the figure anymore. The sculpt of the plating is awesome and the glove looks great and has a depth to it. The painted detail is well done. There’s a dark wash on the silver and the strap on the glove is painted a different color. The only issue I have is probably not Hasbro’s fault – the star should be sculpted and not just painted.

However, Hasbro probably made this figure based off of pre-visual effects Winter Soldier. If you look at set pics, the star is just painted onto the costume armor that Sebastian Stan and the stunt guys wore:

But in the final cut of the movie the arm – which is CG rendered – has a much nicer looking star that is actually a part of the cybernetics:

While Hasbro wasn’t technically wrong here, the final version looks way cooler.
Winter Soldier’s belt and shoulder harness are separately molded pieces. The shoulder harness doesn’t really serve much purpose. In the movie Bucky had a holstered pistol on the back and it looked pretty badass. No pistol here. No paint, either.

The belt on his waist is kind of weird. It looks like a tool belt. In the movie that part that hangs down was a holster, which makes sense. On the figure it just has one knife stuck in it. One knife with barely a coat of silver paint on it, just like the buckles barely have. There’s another knife on the back, but it has no paint, isn’t removable, and is kind of floppy. This piece could have been really cool, but isn’t.

The trousers are pretty neat, sculpt-wise. They have a texture that looks like some kind of combat-ready material. The knee pads disguise the joints there and have a wash. The boots are an awesome design, but the lack of paint makes them look cheap and unfinished. Ideally they would have different shades at least on the laces and soles. But even a wash or just some grime would have made a big difference. As is they are disappointing.

Winter Soldier comes with an alternate head, a sniper rifle, and Mandroid’s left leg. Given the number of accessories that the newer Marvel Legends have been coming with, this is kind of a letdown. Especially with as much weaponry as Bucky utilized in the movie.

The extra head isn’t bad. It’s a great likeness of Sebastian Stan, but it would be even better if it had his stubble. The black around the eyes doesn’t really look like what was in the movie. I wish this piece had a removable breather mask so it could look like Winter Soldier did in the movie when he took the goggles off.
The heads pop right on and off and are easy to swap out.

This rifle is just no good. It looks way too silly to go with this movie-based figure. I honestly can’t remember if he used a bright red rifle (I don’t think he did), but if the red parts of this were silver or gunmetal it would be okay. Still kind of too much, but okay.
The rifle doesn’t interact with the figure very well. He can’t hold it in any position that is reasonable for such a large piece of weaponry.
Winter Soldier really should have come with a couple of pistols and knives. The knives on his belt should be removable, that things should be a holster with a removable pistol, and there should be another holster on his shoulder harness. Lots of missed opportunities for coolness with this figure.

Regardless of the looks, this is a fun figure. The double jointed knees and elbows work very well and the hips and ankles facilitate leg poses. The right arm works great, with a big range of movement at the shoulder. The left shoulder rotates but doesn’t pivot at all. I’m sure it would be great if it worked.
There’s a cut at the waist that I think is a joint, but I can’t get it to budge and I’d rather not straight-up break the figure in half just in case I can’t find another one.
The joints all work well, but with the lack of accessories there isn’t a whole lot to do other than find poses that a one-armed assassin looks cool doing.

The arm breaking off pretty much killed any chances I had of liking this figure more. I think I probably wouldn’t have been so critical of the paint scheme and lack of accessories if that hadn’t happened. Btu as a result I’m just not very happy with this guy, especially after I compared him to the older Marvel Legends Winter Soldier:

That is a way better figure.
2 out of 5
Lots of issues with this one, though I suspect several are just side effects of how Hasbro had to design it prior to seeing the final version of the movie.

I have yet to see this figure or the other two in its wave at retail. The cheapest I’ve seen it is on Amazon for $21.99, but I really think that once it does show up in brick-and-mortar stores it will be easy to find. As opposed to Black Widow, who I think is probably going to be one of the more frustrating Marvel Legends in recent years.
Posted by Phantom Troublemaker at 11:00:00 AM