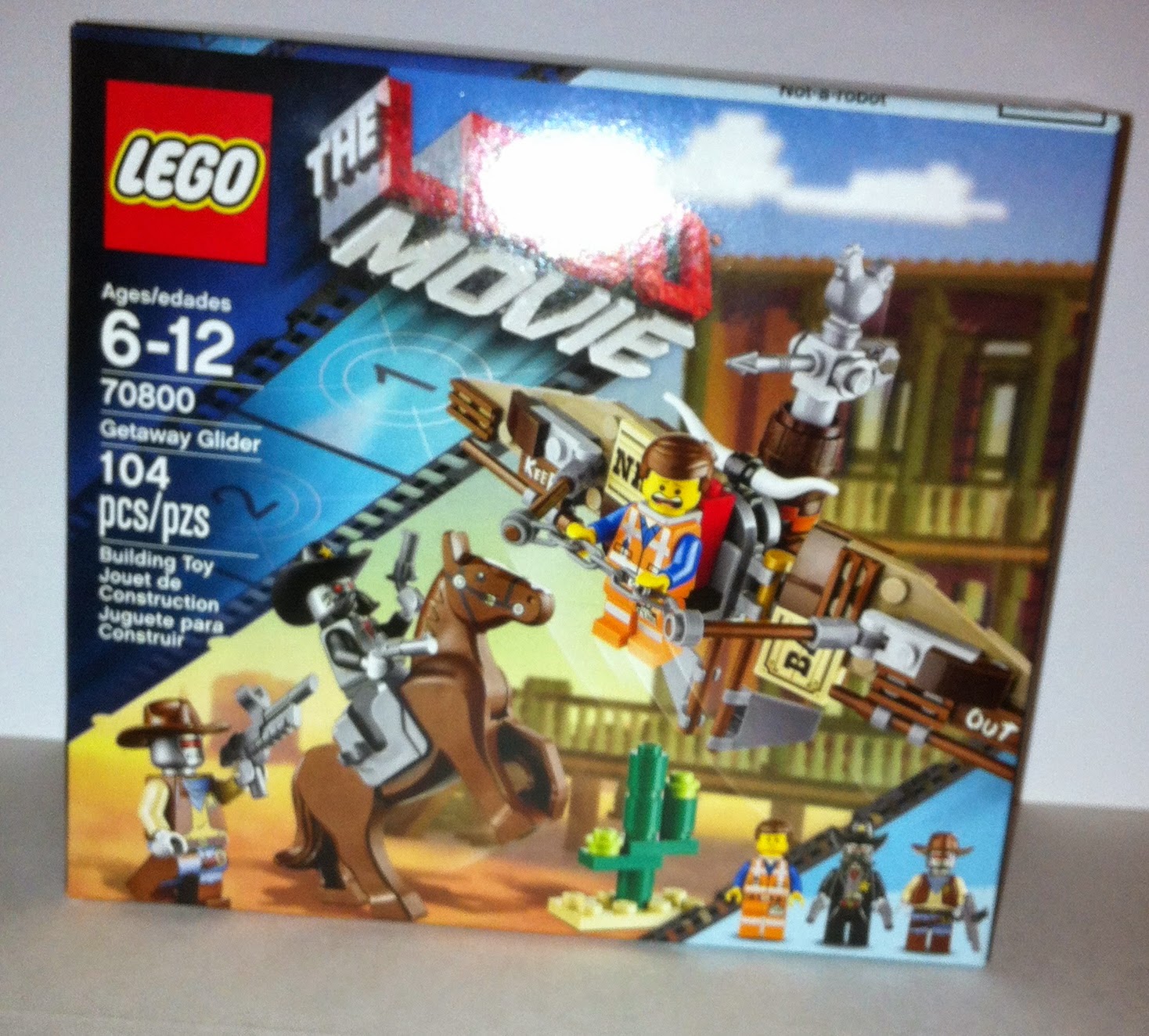 I was going to write up an intro to Richard's intro explaining what he was doing today, but he did a way better job than I could. While I'm here, though, I want to express my sincerest thanks to every single one of you that has bought stuff or donated or just spread the word. I'm close, Phantomaniacs. Really close.

I want to give an especially big thank you to Richard for what he's doing today - going way above and beyond. Thanks, man.

-Phantom
Before I get to my latest LEGO review I would like to tell you guys about yet another way to help this wonderful site that we all love so much, Needless Things.
You all know by now that Phantom needs our help. What many people don't understand about blogging and podcasting is that it can get expensive. Yes, it all starts out mostly for free but the more you do, the more costly it gets. Phantom blogs a lot with a ton of pictures (& he wants to do more podcasting) which is totally amazing for us but a bit pricey for him. So he has called upon us for help and I am here to offer you guys something special. As some of you may know, I am a horror author and I have put together an auction to help out the cause.
I have put together a very rare item that will help support Needless Things. On eBay right now is your opportunity to get ahold of a copy of Fat Trapped with 100% of the proceeds going to the Needless Things site! Not only do you get the book (plus some other goodies) but it will definitely be a one of a kind item. Along with being signed, I have gone through the book and doodled on select chapters. I sometimes draw in the books but never to the extent that I have here. Please spread the word and let’s help ol’ Phantom out so we can keep this awesome, nerdy site going even stronger than it was before!
Signed Fat Trapped on eBay! 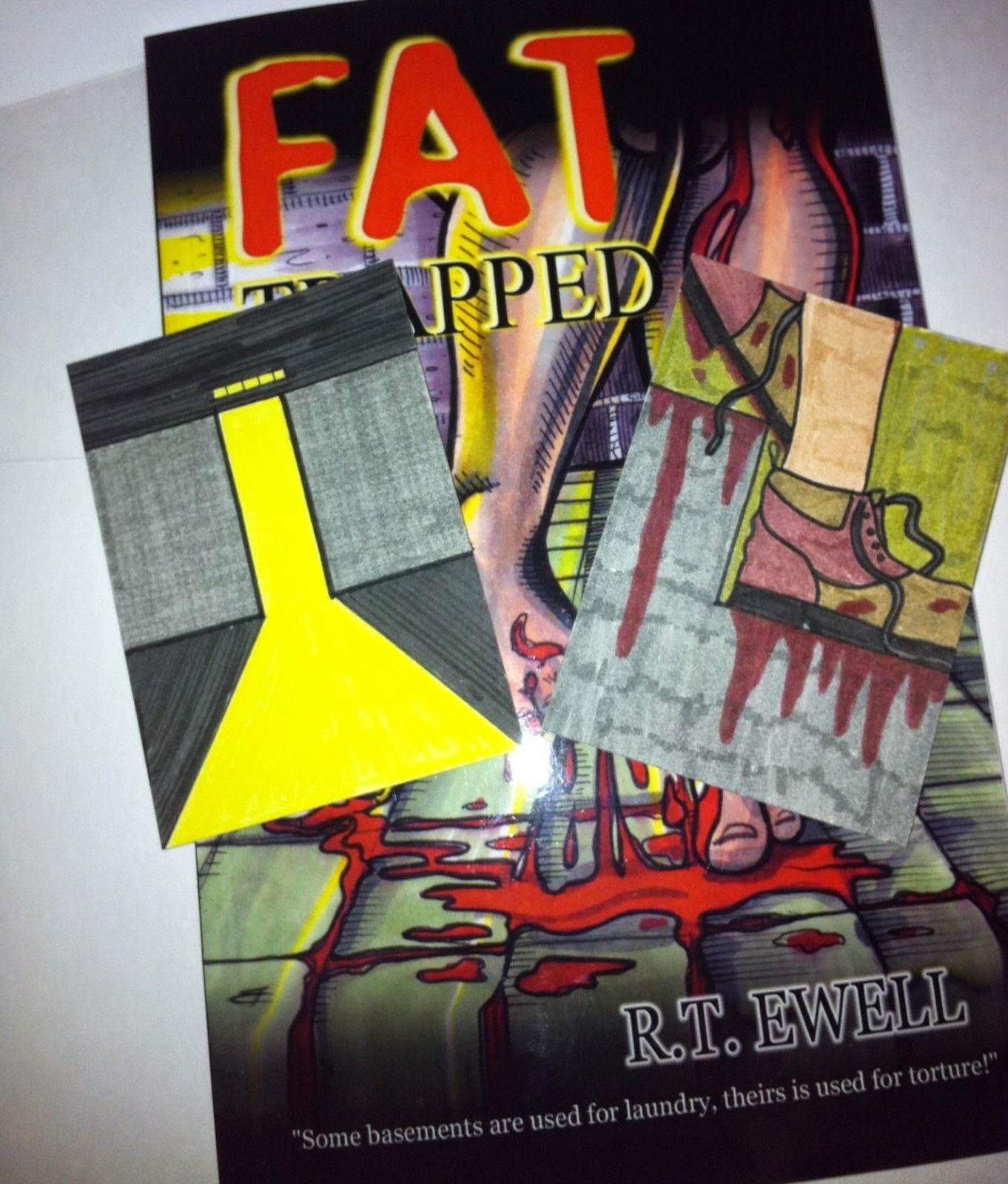 I bought this set before I saw the fantastic movie that it's from. I never opened this until just the other day for some reason. It just didn't do much for me. I mainly bought it because it was one of the cheapest sets and I wanted some of the minifigures in it. Well I had some spare time the other day finally being able to form an opinion on whether or not this is a worthy buy.

Normally, LEGO knocks it out of the park with their packaging but I think this one is weak. I hate the positioning of the glider because the angle is very odd. However the sheriff bot on the horse is awesomely placed with the nice decorative cactus to its left. 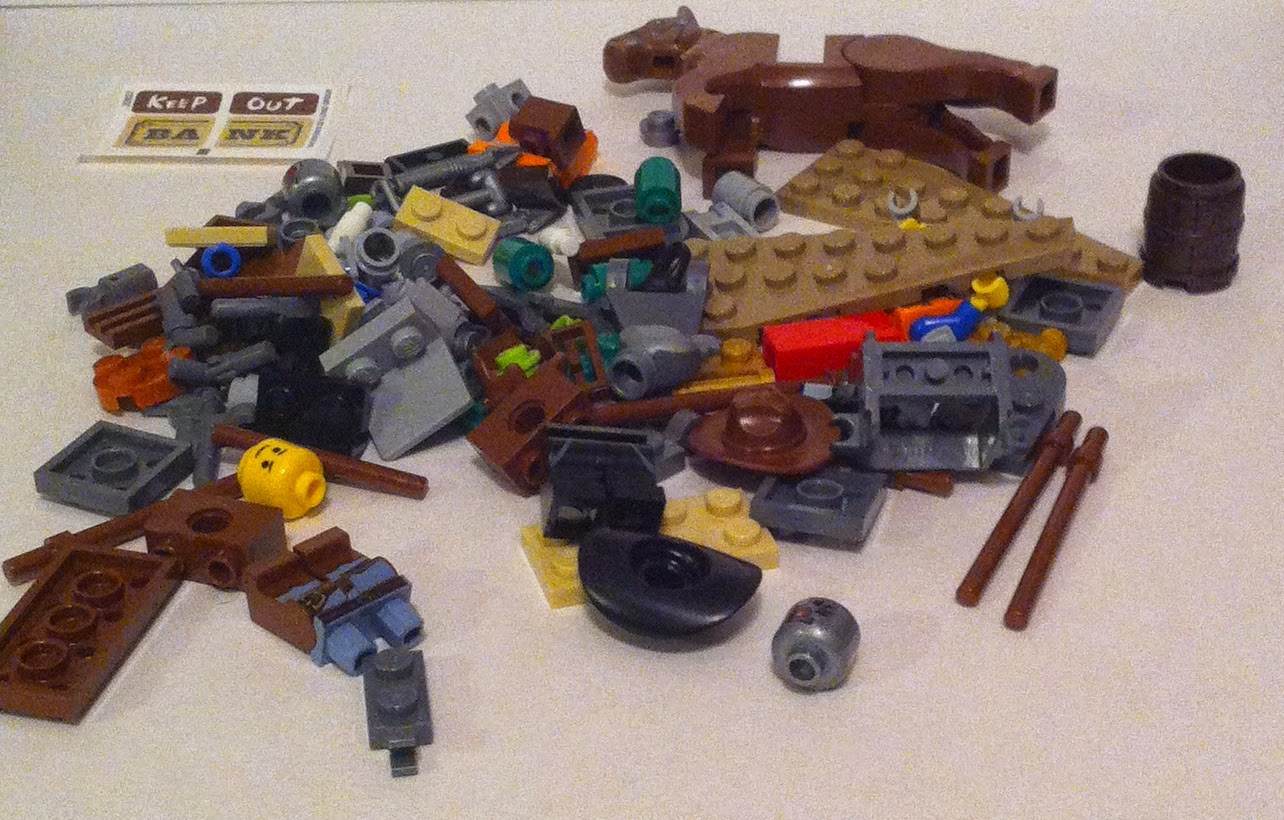 The glider itself is crazy looking, with lots of different pieces completing this odd makeshift flying contraption. Once I started building the set, everything went together fairly well. Like almost every LEGO set I had a problem finding one piece and may or may not have freaked out that the company forgot to put in the piece. Which by the way, has yet to happen to me. For a cheaper set this was definitely more intimidating then equally sized sets but was an easy build.

For the price of 12.99 you get this set plus 3 minifigures (minifigures are basically a 2.99 value) so it’s a pretty sweet deal. The Emmet is the same one from the Melting Room play set but it’s still a fun figure that comes with two faces, the other one is kind of a smirk and is hidden by the back of his hair. Oddly enough it’s a better smirk than Han’s from the Micro Fighters set I reviewed last time here on Needless Things. The Sheriff bot is completely awesome as you can tell. He has two guns, a cool star on his hat, and a sweet mustache! The other bot is cool as well. I'm not a fan of that gun (which is used in a ton of sets) but he makes for a cool sidekick. 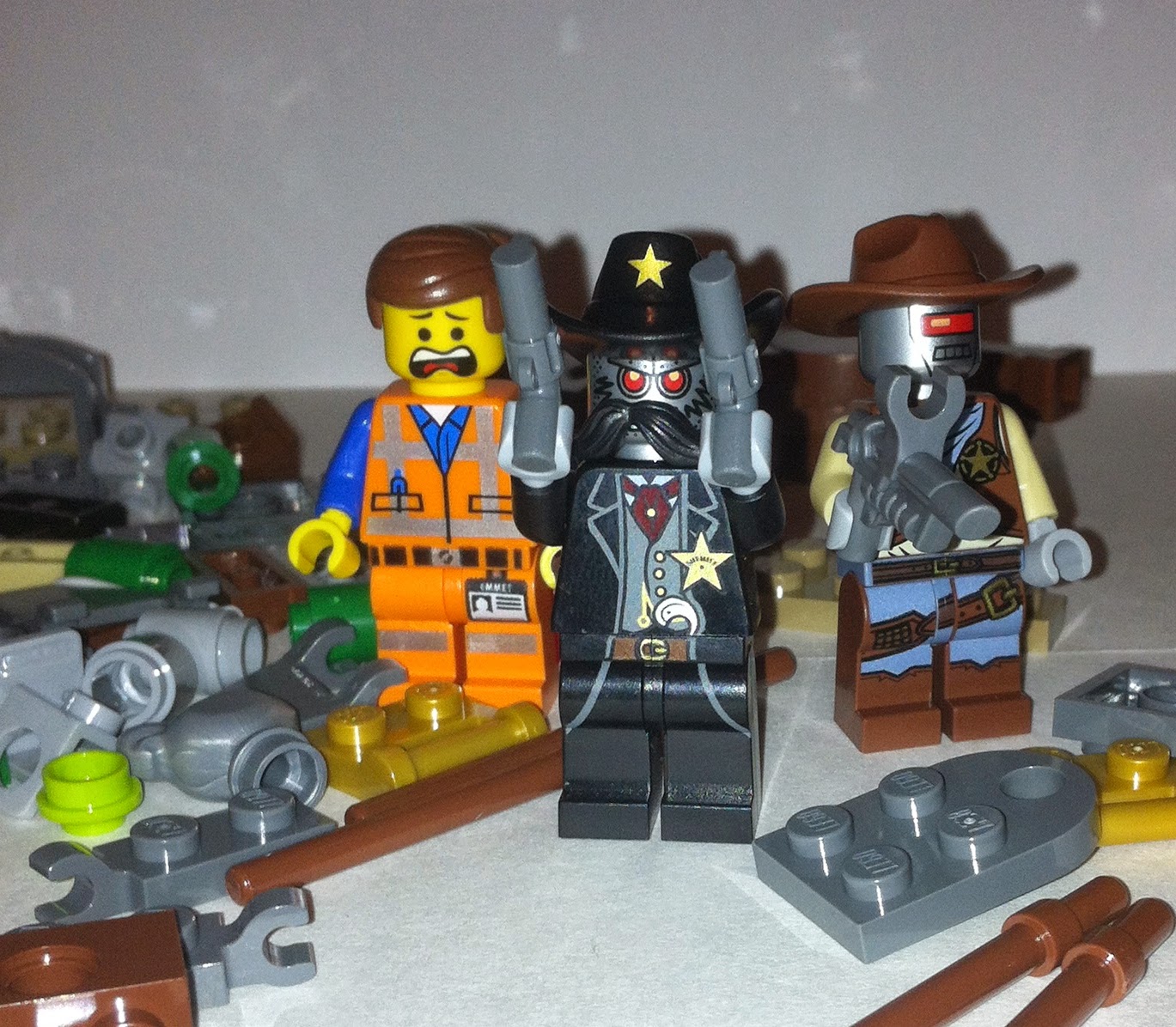 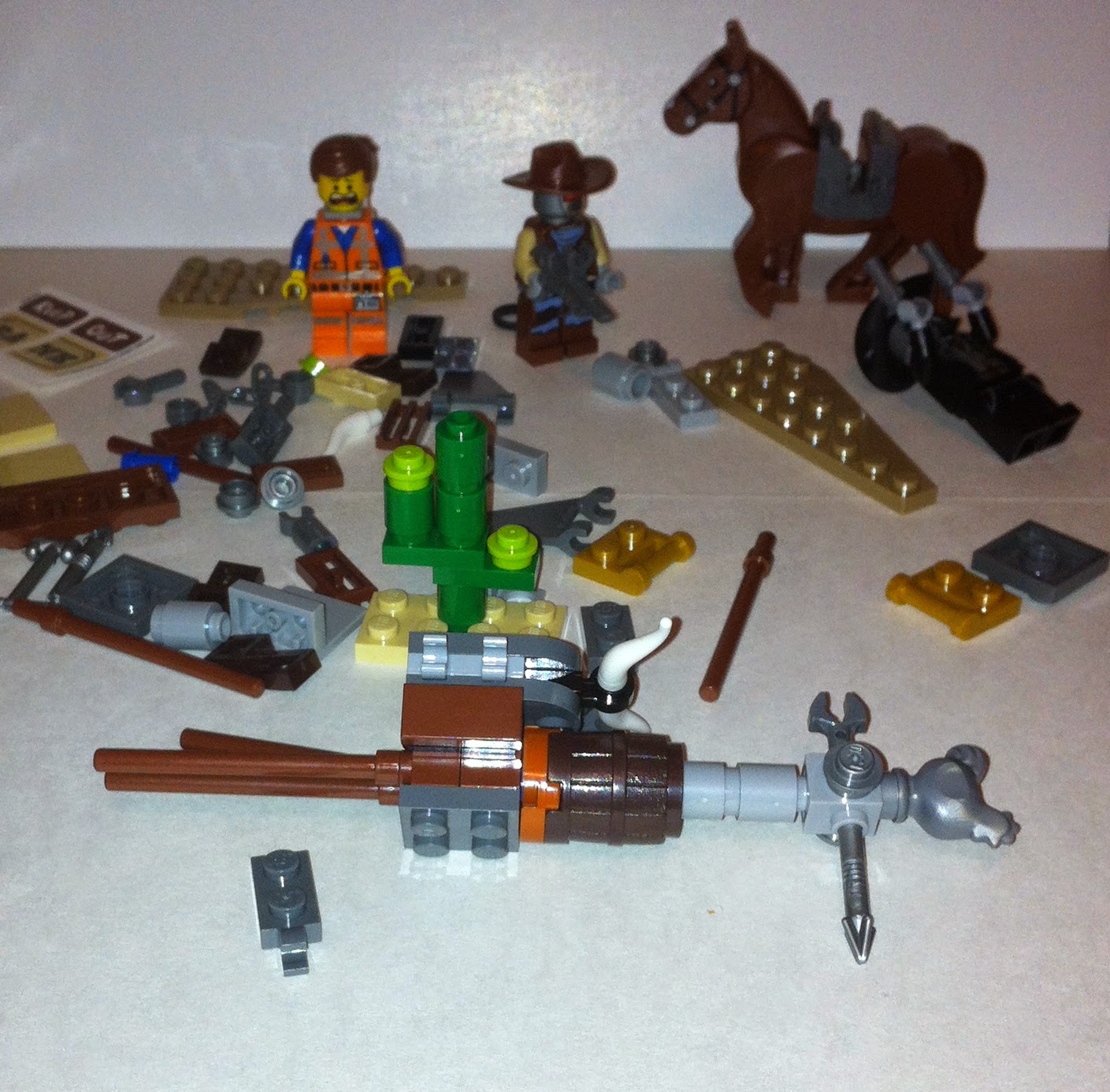 The cactus was the first thing that was on the list to build. It’s a simple and effective piece in the set. Then it's onto the glider itself. The first piece of the glider I have a bit of an issue with. You see that barrel looking thing under the gray pole? It pops off if you remotely breathe on it. Frustrating. 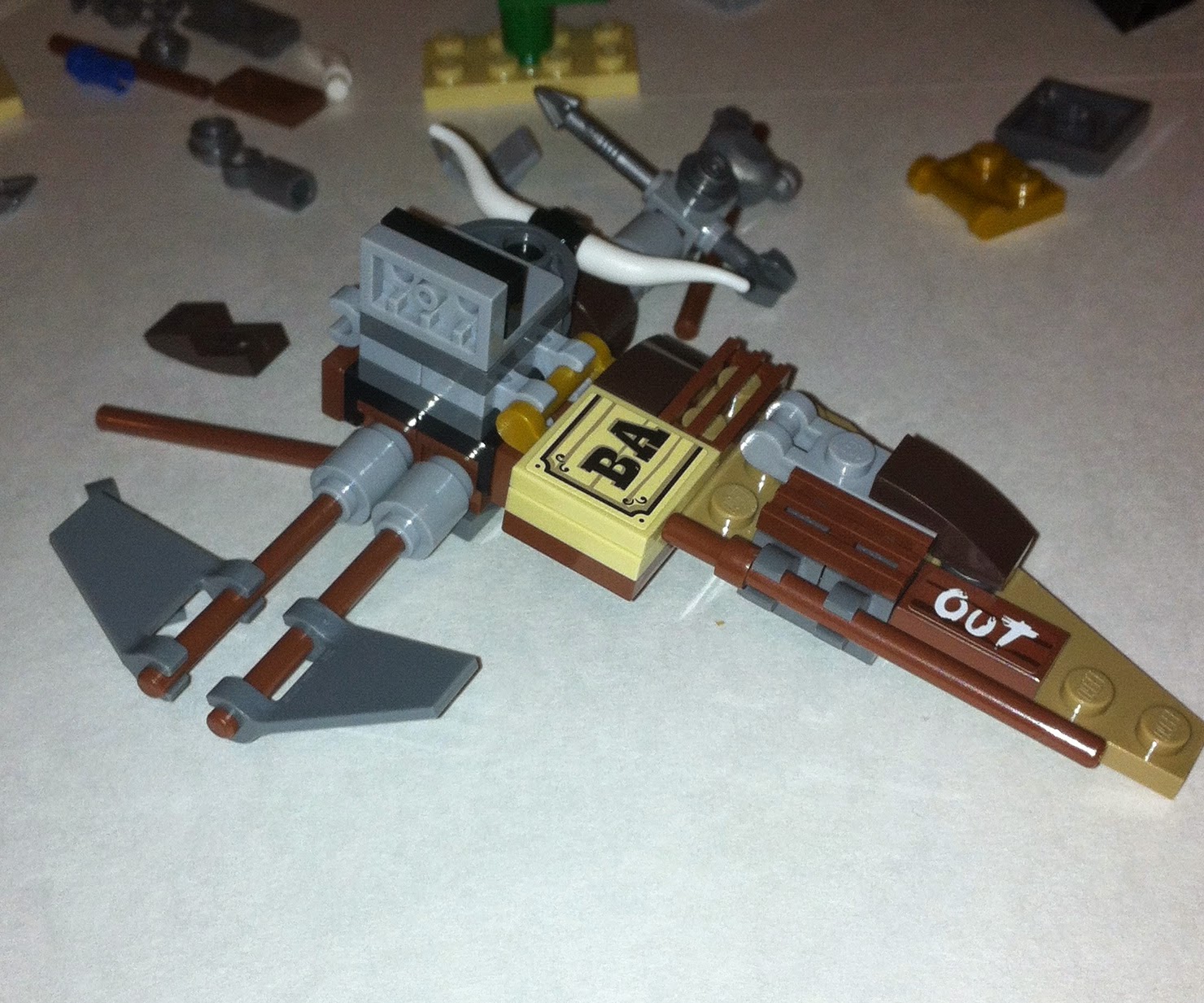 Things went smoothly after the “Barrel Incident Of 2014” happened. There are stickers that you have to put on two pieces on each wing as you can see. The word Bank and phrase Keep Out are separated out on each wing. Luckily, the stickers are smaller than the actual pieces so it makes it easy to apply.

Wings: So obviously the wings will move since this is a flying vehicle and they have a nice range of motion.

Gray Fins: The fins at the bottom have a wide range of movement that rotate all the way around.

Weathervanes: The gray pole with the weathervane on top spins around like crazy and is extremely easy to pop off so you’ve been warned... 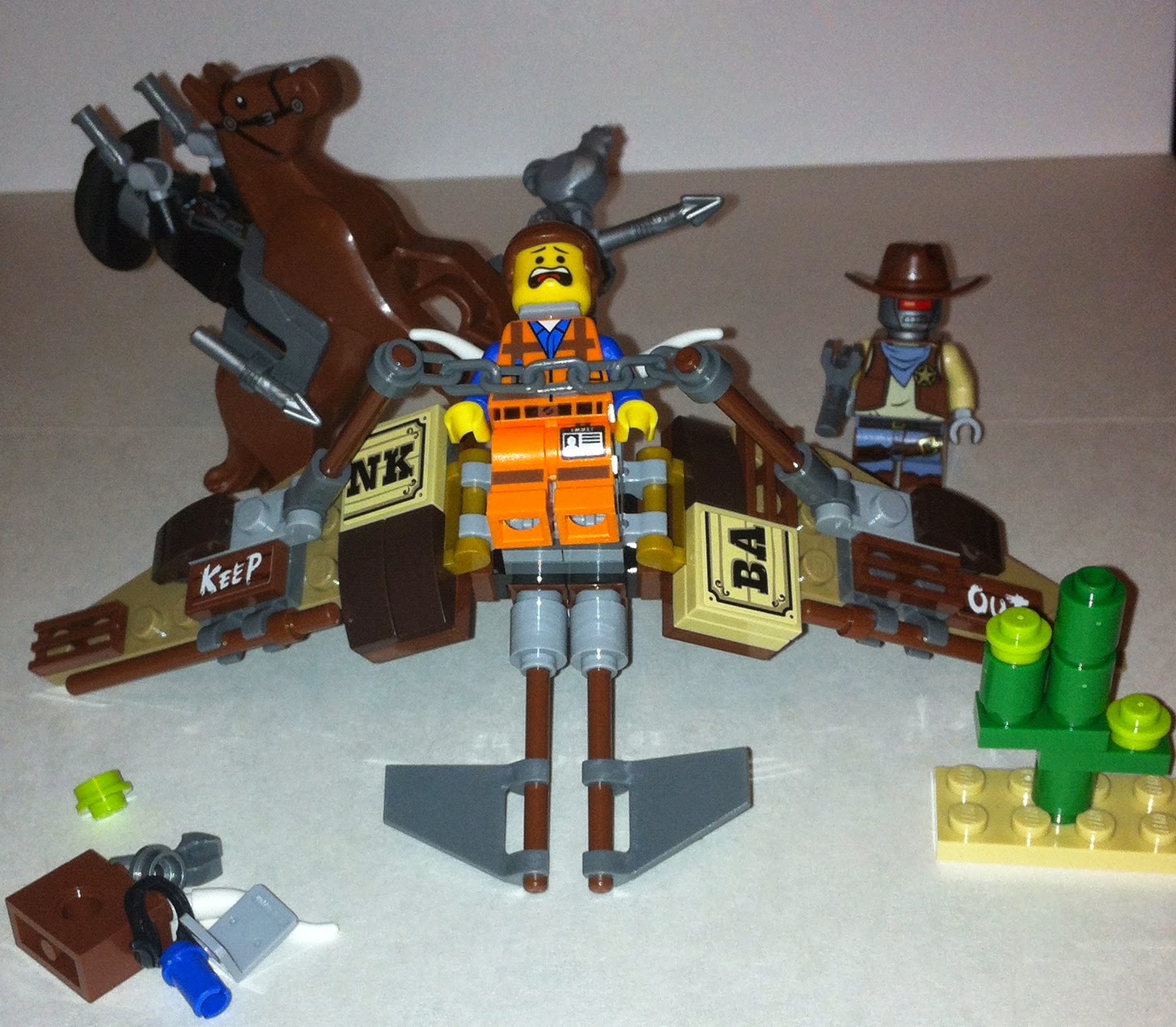 Completed:
Here is the finished build and as you can see it looks pretty neat. Displaying this set is tough because it’s a flying vehicle but you do have two options. Option one is pictured above, where it rests on the wings. This is okay but Option two is much better. I didn't get a pic of it because well I have no good excuse except Lord Business got in the way. Option two is better because it can stand on those gray fins you see on the bottom. Just trust me on that one.


Oh crap I almost forgot....My favorite part of the set! 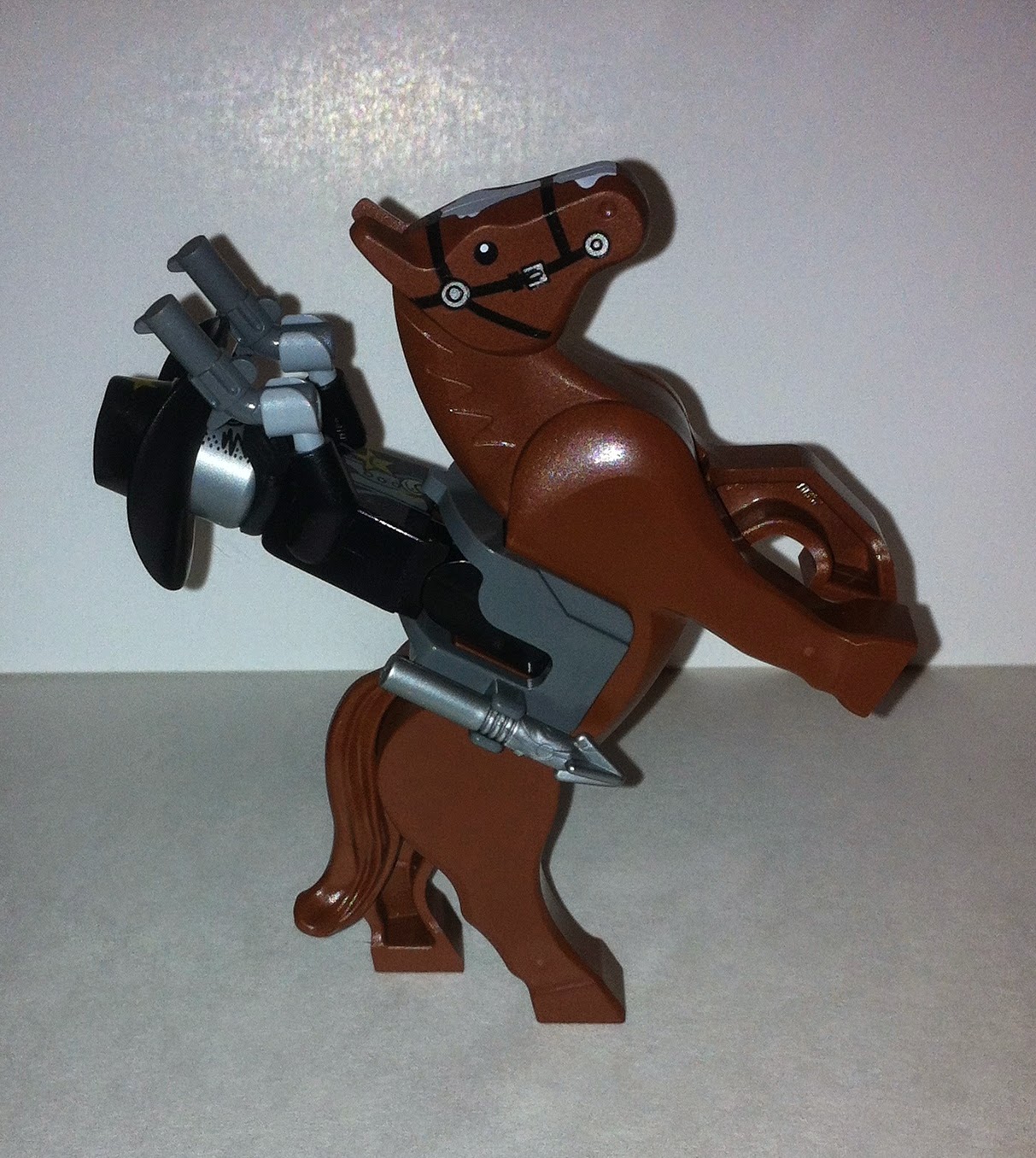 IT HAS A HORSE! YEE HAW!

Okay maybe it’s not that cool but I think it’s hilarious and makes for a fun pose! This horse has probably been used a million times by LEGO - most recently by The Lone Ranger sets - but this is an easy, cheap way to obtain the animal.

This set is just overwhelmingly bland to me. I mean, I guess it’s kind of sad that the cactus and the horse are my two favorite things about it. Although the sheriff is a pretty kick ass minifigure and a great addition to my minifig collection. The best part of this set is that it has a ton of cool pieces for only $12.99. Even if you don't want the glider the minifigs, horse, and cactus are worth purchasing this set for in my opinion. Then you would have a lot of good spare parts for other builds.

I don't know what I would change about it to make me like it more; something just bugs me. I am a bit burned out on Emmet. Even though I love the character I have like 6 minifigs of him and they are all basically the same. This set is definitely not a must have and if there is a set that you think you would like better, I would spend your money on that one.

Visit my blog at http://richardrants.wordpress.com