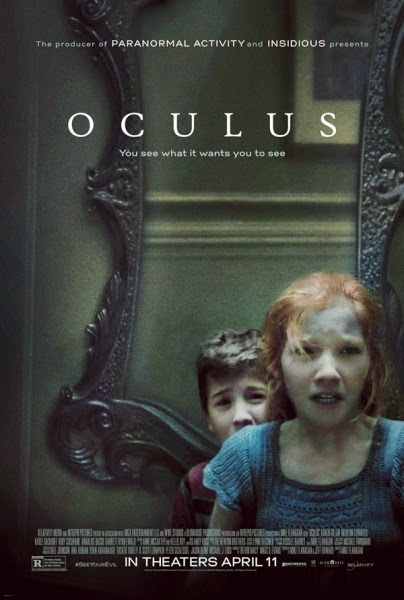 Well, I suppose I’m a big fan of her Doctor Who character, Amy Pond. Because until recently I had never seen her in anything else and I didn’t have much to base fandom upon. But she’s a nice looking lady and a redhead.

I’m such a fan that I was willing to go and see a movie that 1) didn’t necessarily look great, and 2) was a WWE Film just because Gillen was in it. Don’t get me wrong – I’ve liked WWE Films movies in the past. I was one of the few fans of See No Evil. But it isn’t exactly a mark of strong quality.

For this movie watching experience, me and the missus headed out to the fancier Movie Tavern on Lawrenceville-Suwanee Road, which I do not recommend. Everything costs more and the place just isn’t as comfy. They have these reclining seats. Let me correct that – they have these reclined seats. You can’t sit up straight if you want to. They also have the swing-out individual trays rather than the bar. I don’t like those. But at least they are straight and don’t dump food in your lap like the ones at the Studio Movie Grill.

Very excited about The Quiet Ones, the new Hammer Horror flick.

Why does The Purge 2 look so much better than The Purge? Not that I want to see this one either, but it looks better.

I really liked the story structure of Oculus. We begin with what is clearly a flashback sequence that the audience does not understand but that seems like it will probably be explained later given that it’s clearly the focus of the movie. Two kids – a boy and a girl - are trying to avoid a dude with a gun. It’s clear that the kids are brother and sister and not so clear who creepy gun guy is. In the course of avoiding gun guy, the brother sees a fucking scary ghost woman with glowing eyes. Then gun guy is on them, only he transforms into a kid that looks like the offspring of Randy Orton and Sam from Supernatural. And then that same kid wakes up in a bed.

It turns out the kid is the brother all grown up. He’s in a mental institution, but is being released because he has finally accepted that the crazy ghost memories from his childhood are false constructs and that he killed his father because he (his father) was insane and not because his father was being controlled by an evil mirror ghost with glowing eyes.

Then we jump over to Karen Gillen. She’s at an auction bidding on a mirror that, quite frankly, Queen Grimhilde would be hesitant to hang up. This thing is scary looking. But Gillen clearly has a purpose behind buying it.

For me, seeing Gillen portray this character was one of the high points of the movie. She handled her American accent quite well and got play a character that was utterly unlike Amy Pond. She was driven and on edge and just a bit crazy. I thought she did a great job. It was fascinating watching her terse performance.
Another high point was Katee Sackhoff’s performance. I didn’t even know that she was in the movie. She played Gillen’s younger self’s mother and had probably the best role in the film. She went from fun, hot mom to mildly disturbed to terrifying animal over the course of the movie and was fantastic at all of them. She also had red hair and if you thought blonde Starbuck was hot you should see redhead Starbuck.

So if you take nothing else from this review, take this – the ladies’ performances are worth the time to watch.

The meat of the plot is that while Orton Winchester was in the loony bin, his poor sister – Gillen – was out in the real world getting by and coping with what happened without professional help. Ten years have passed and the whole time Gillen has been planning on getting the mirror back, proving it houses an evil spirit, and destroying it; all to clear her father’s name. She portrays such an intensity as this plot unfolds that I stayed interested despite the predictability of the plot. Don’t get me wrong – the events were not necessarily predicable. But certain plot points were telegraphed so clearly that a WWE referee could have seen them coming.

The issue of whether or not Gillen’s character is just bonkers is cleared up fairly early on and then the action kicks in. The main issue is that Gillen and Orton Winchester are not quite strong enough to carry a movie. Or maybe their characters aren’t likeable enough. I’m not sure. They’re both very good at portraying their damaged, tense siblings. But there’s just something missing here. I never felt enough – not through the whole movie.
In the end, exactly what you thought was going to happen happens. It’s not unsatisfying, but it also isn’t very fulfilling. We recently watched You’re Next on the recommendation of pretty much everybody. It had a similar plot device – an element that you saw early on that you just knew was going to fuck up somebody’s day – but the payoff in that movie was exponentially more exciting than what happened at the conclusion of Oculus.
In a way this movie was quite good. Like many horror movies before it – notably Hellraiser – we see certain events surrounding an object at a certain point in time. Oculus gave us a bit more history than Barker’s classic – perhaps to it detriment – but it does have shades of potential. I could see future installments improving greatly on what was done here. And apparently most people liked this flick more than we did, so future installments seem likely.
I’m going to blame the director for the faults in the movie. The story was there. The mysterious, haunted object was interesting and different; while being commonplace enough to potentially install nightmares in the viewers’ minds. And the cast seemed good enough. I just think some poor decisions were made as far as presentation and pacing are concerned.

After seeing The Ring I went home and rolled the television set out of my bedroom before I went to sleep. No shit.

After watching Oculus it didn’t even occur to me to be wary of mirrors.