Best Cartoon Ever (of the Month) - Conan the Adventurer by Kalan 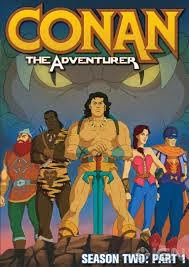 FORWARD NOTE: Now, I have to warn you fellow toonthusiasts, it was incredibly difficult not to compose this month's edition of Best Cartoon Ever (of the Month) in all-caps – with the hope that you would more thoroughly comprehend how utterly excited this cartoon can make me. I am always easily excitable when it comes to talking toons, but this one makes my ADHD shoot through the roof and I'm sort of like that loud, ridiculously annoying kid you really wish was in a Ritalin coma. My enthusiasm for this show makes me want to grab you by the shoulders and yell at you how absolutely amazing I find it and recount the entire story line to you at an absurd volume. So, reader dearest, if you could do me a favor and yell a little in your head while you're reading this, it'll make it that much more enjoyable experience. Now on to said experience....

There are few cartoons in my collection and viewing history that are as wholly gratifying as this one. Nearly every demand my little heart could have of a cartoon is met – wizardry, mythological creatures, demonology, saurian beings, alternate realms of reality, dragons, ninjas, werewolves and magical weaponry! I mean, come on..... seriously!?!?! I have yet to find a cartoon (as in one written specifically for children) with as comparably complex of a story line. I could almost venture to say that this is my favorite cartoon ever. Of all time. Yeah. A statement I am still hesitant to make because I hate to pigeonhole myself in such a way, but it's safely in my top 3. Ladies and gentleman, I am speaking of course of the feel-good my-family-got-turned-into-living-stone toon of the Hyborian Age, 1992's Conan the Adventurer!

This month we join our main hero, Conan (voiced by Michael Donovan) on his journey to remedy the living stone forms of his mother, father, and grandfather. Decedents of Atlantis, the barbarians hail from Cimmeria. He is accompanied by Greywolf (Scott McNeil) - a wizard from Xanthus who is also on a mission to restore his brother and sister to human form after Mesmira turned them to wolves, Jezmine (Janyse Jaud) - an acrobat in search of her real family, Zula (Scott McNeil) - a warrior priest of the Wasai tribe and Conan's blood-brother. Towards the end of the series Snagg (Gary Chalk) - a barbarian from a Viking tribe - joins up. The good guys rotate in their appearances in each episode, but there are usually at least 3 of them. Each of them are outfitted with magical weapons that Conan's father created from a material known as Star Metal, which, as explained by the first episode, is a meteorite that fell to Earth in a massive shower. This material has a magical power to reveal the true form of the bad guys in this show. (SEE I TOLD YOU IT WAS AMAZING!!!) Conan has a Star Metal sword, Greywolf initially has a bare staff (haha, okay) but is given the Claw of Heaven that doubled his wizardry powers. Jezmine has Star Metal shuriken that will “return” when commanded like Zula's boomerang and Snagg has an ax and grapnel made from the stuff. After Conan's horse Thunder saves his life, Snagg gives up the grapnel to be turned into horseshoes for the comically strong-willed beast. 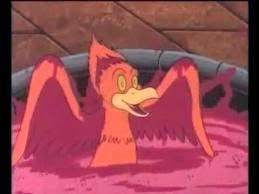 Normally I loathe the “quirky sidekick” characters in these cartoons I otherwise adore. Needle is one of the few that is actually somewhat tolerable. He is often quite useful to his counterpart, not just a bumbling idiot who just happens to be super friendly and unbearably lucky to have been in the right place at the right time. Needle, being a young phoenix, is bound to aid Conan in his journey in order to advance to his adult form of the all-powerful phoenix of mythology. He has phoenix powers and memories of phoenix ancestors that the writers utilize perfectly. He can change into “phoenix design” and become a 2D version of himself among a few other mystical powers. 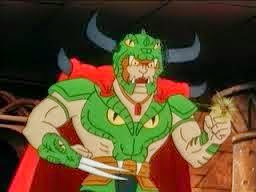 Now on to my favorite part of this show – the BAD GUYS!!!!!! In ancient times on this world, this giant snake named Set nearly successfully enslaved the entire human race. All the wizards on the planet joined together and banished him to the Abyss (holy crap, right?!?!). All of Set's followers, the Snake Cult, were saurian Snake Men and when he was banished to the Abyss, they took human form so as not to be discovered. The head honcho (high priest) Snake Man is this TOTAL BADASS named Wrath-Amon (BEST BAD GUY NAME EVER!). Because of his supreme badassery he has the rechargeable Black Ring that Set fills with incredible powers, making Wrath-Amon (Scott McNeil) one of the most powerful beings on the planet. Wrath-Amon was originally a Gila monster who was transformed into a serpent man. He seized power from his predecessor Ram-Amon (also Scott McNeil). As the high priest of Set, Wrath-Amon is attempting to bring his master back into this realm by building seven pyramids with Star Metal discs atop them – in order to do so, he must collect every bit of the metal he can, including the protagonists' weaponry. Wrath-Amon's annoying sidekick is Dregs (Doug Parker), a Naga. He really never helps or does anything interesting other than take the Black Ring while Wrath-Amon is molting and become Dregs-Amon for an episode. He's pretty much the classical sniveling evil sidekick. 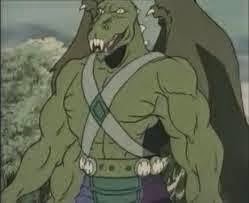 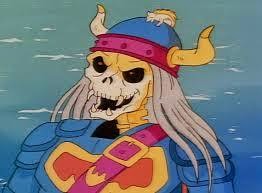 Wrath-Amon has two super-underlings. Skulkur (Doug Parker) was once a man, but black magic and a zombie slave curse turned him into a magical skeleton zombie. He can raise the dead, both human and animal. At one point he's riding a skeleton elephant and I just can't contain myself when I see that, cause I mean, seriously, a fucking Skelephant....who does that?!?!? Next we have Windfang (also Doug Parker). He was also once a man turned into a four-armed dragon-like creature. He turns back into his human form, as does Skulkur, but ultimately the black magic wins. The main difference between these two is that Skulkur LOVES being a skeleton zombie while Windfang is constantly trying to return to his human form permanently. Windfang is more a slave to the will of Wrath-Amon than Skulkur. 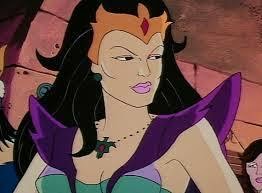 Finally we have Mesmira (Kathleen Barr), the Queen of Stygia, the city of the Serpent Men/Snake Cult. Probably my favorite female villain of all time. There aren't that many female cartoon villains out there, but she is by far the best. Probably her only competition in my head is with Mystique. Mesmira can also shape-shift, so maybe I just have a thing for smokin' hot babes that can change into whatever form they want (even though they usually just choose another smokin' hot babe to turn into). While not the supreme leader of Stygia (that can only be the holder of the Black Ring), Mesmira is of noble blood and is a powerful force and frequently tries to acquire Wrath-Amon's Black Ring. She commands a legion of werewolves that she created with the thorns from the Lycanthra plant.

I know I didn't pick out a few particular favorite episodes to outline and that's for a good reason – I love this entire show and I couldn't pick a few that were better than the rest. They're also so super developed that there aren't single episodes that stand alone, each one builds strongly from the previous one. As I said earlier, the overall storyline is ridiculously complex. It isn't something a child could reasonably follow, but as an adult, it's not too hard to keep up with. That's one of the reasons I absolutely fell in love with this cartoon. About half-way through the 63 episode series, they started doing “in next week’s episode” and “last time on Conan” at the respective end and beginning of the episodes, I guess for that reason (kids not being able to follow it). It's so well-written and each episode contributes excellently to the story arc. I didn't find a single inconsistency, and usually they stick out like a sore thumb to me. That says A LOT for this show.

I absolutely love the animation style as well. There is TONS of attention to detail in the landscape and the creatures/people. There are only a few coloration issues (like someone's hair being black in one episode and yellow in another) but they are minimal and probably only noticeable to people like me who have way too much time to watch the same cartoons over and over and over and over and....well, you get the point. There isn't a single thing I could make an honest internetgative comment about and not want to slap myself for saying something bad about this show. 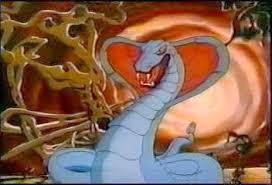 For almost a month I've been singing/yelling the theme song also – so you know it was a good one. It really gets you fired up for the following adventures!. It is probably available on YouTube, cause what isn't these days, so do yourself a favor and give it a listen. If you can watch it a second time and not yell along with it, then this article series probably isn't for you.


I don't know of another cartoon (as I said, meant for children) that I can honestly say I like more than this show. Conan the Adventurer has something for everyone and everything for this someone. We all owe Sunbow Productions a debt of gratitude for bringing us this gem. This show is not something you can enjoyably knock out in a weekend. I tried to watch it all the way through a few times and got about 20 episodes in before I needed a brain-break every time. If you get your hands on this show, definitely take the time to enjoy it and appreciate how magnificent it is. Ya'll, SERIOUSLY, there is SO MUCH that I didn't touch on with this show, simply because I'm at almost double the Phantom's required minimum word count. Make it a priority on your viewing list because it absolutely knocks the proverbial socks off of most of the shows (and pretty much every cartoon) out there today. CONAN!
Posted by Phantom Troublemaker at 11:00:00 AM

Email ThisBlogThis!Share to TwitterShare to FacebookShare to Pinterest
Labels: Best Cartoon Ever (of the Month), cartoons, Conan, Kalan