Most excellent greetings fellow tubular 'toon enthusiasts! - widdly air guitar- Are you ready to join me on a truly non-bogus journey- er, well, I mean a most Excellent Adventure through time? Those two most triumphantly radical dudes, Bill S. Preston, Esq. and Ted “Theodore” Logan (and of course Rufus) are back in CBS/Fox Kids' gnarly 1990-1991 animated series Bill and Ted's Excellent Adventures. I'm way stoked to introduce you to this most non-heinous edition of Best Cartoon Ever (of the Month).

If you were looking for a viewing experience that was truly historically accurate, look elsewhere. I mean, seriously, what do you think this is? The Back to the Future animated series?!? Anyway, Bill and Ted's Excellent Adventures does not pick up where the original 1989 film left off. Socrates and Napoleon make no appearances. In an effort to capitalize on the movie, Hanna-Barbera and CBS took a pretty decent stab at extending the brand to television. Once it got into Fox's hands though, as with most things Fox touches, it turned straight to crap. Most of the reason I really enjoyed this toon was, as I'm sure you can guess this if you've been following for a while, the voice cast! For the bodacious first season, we're blessed by the film's crew for the main cast! That's right, we have Alex Winter as Bill S. Preston, Esq., Keanu Reeves as Ted “Theodore” Logan and George Carlin as Rufus. If I hadn't been age 2 and 3 respectively when this movie and first season ran, I would have appreciated this attention to detail on behalf of the show's creators (because I do now). The second season switches the voices of Winter, Reeves, and Carlin for their counterparts in the live-action show that followed the animated series. 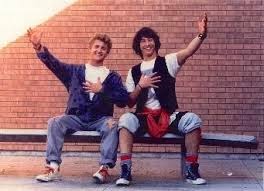 The first season is definitely the best of the series' two-season lifespan. The first follows more closely the “rules” of the film whereas the second is an attempt to gear up the live-action series that followed after this show went belly-up. The second season deviates from the “no imaginary people” notion held by the movie and first season, thanks to a newly developed “Slint” phone booth which allows them to encounter literary figures as well as take a relatively non-heinous Magic School Bus-esque adventure into their gym teacher's body. While I'm sure this Slint phone booth was a great idea at the time, well, actually that was just as lame then as it is now and for the same reasons - I realize you have to chase the all-mighty greenback, but please, not at the expense of the original creative work. There aren't many cartoons that I love the way I love this one where I would say “stop” after the first season, but this is definitely the case with Bill and Ted's Excellent Adventures. 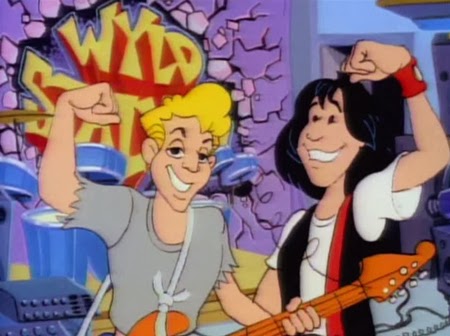 My favorite episode of the whole entire series is “This Babe Ruth 'Babe' is a Dude, Dude”. It begins with Rufus taking bowling shoes to Yankee Civil War troops to fix a warp in time – Bill and Ted donate their new kicks to the worthy cause despite it being Wednesday – the dreaded gym class day. Their time-traveling is brought about when the dudes are tasked with shining trophies after causing the gym teacher some grief for running through the hurdles instead of over. The gym teacher had a Babe Ruth autographed baseball that fell into some water while they were polishing and the signature magically disappeared. Luckily, he mentioned his prized baseball was for the greatest Yankee of all time, and as memory would serve Rufus was taking shoes to some Yankees! They get back to Rufus doling out soles to Civil War soldiers and he directs them to Abner Doubleday.

Doubleday makes two appearances in this show, and is completely different from one episode to another. In this one, he's inventing the GREATEST GAME OF ALL TIME (Phantom, spare me your groans of sportsball agony, we're talking BASEBALL and I won't have it!). Phantom Note: This information is incorrect. As everybody knows, the Greatest Game of All Time is Parcheesi. Also, I can’t believe this whole post is about fucking baseball.

The two dudes encounter Harriet Tubman on the baseball diamond “battlefield” and she delivers some egregiously heinous information to young viewers about building the Underground Railroad – like, an actual railroad located underground, complete with mine car. After leaving this time, Bill and Ted have worked up quite an appetite so they make a pit stop in Transylvania. This episode is a little weird and I believe the only time the first season brings in a literary figure instead of a historical figure – Ted mentions visiting Jack and the Beanstalk in one episode and Bill shuns the idea as the giant of the story being “imaginary”. They encounter, of course, a downright ornery Count Dracula (whose voice cadence reminds me of Christian Slater for some reason) that is mistakenly using their phone booth as a coffin.

They then arrive at Yankee Stadium in 1927 where they finally score some $0.05 hot dogs to satiate that time-traveling snack attack, but alas there are no “babes” on the field! As luck would have it Ted still had a stake that he picked up at Dracula's place and lo and behold the Babe makes his appearance! Babe Ruth mistakes Ted for the bat boy and the stake for his new lucky bat. However, as Ruth steps to the plate, the dynamic duo are bounced from the game for not having tickets – and more heinously, with only a Babe Ruth baseball card and no autographed baseball!

While trading that card to a street vendor who was having trouble pushing his bubble gum wares (hence is born the greatest marketing strategy of all time – chewing gum and baseball cards), Bill and Ted are the supreme masters of “right time, right place” and snag the 60th home run of the Babe and luckily it was hit out of the park and it's strangely already signed. A most excellent adventure indeed! 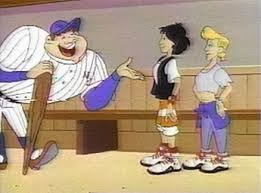 Bill and Ted with the Babe

My second favorite episode is the second one of the series “The Birth of Rock and Roll or Too Hip for the Womb”. In this one, the two dudes are failing their music appreciation class most egregiously. They define classical music as anything written in the 1970s or by Eddie Van Halen. Obviously outraged by that and the fact that they called the “William Tell Overture” the theme song to the Lone Ranger, their teacher orders them to research the topic and write a report due the following day. Being that they have a most triumphant time-traveling phone booth, they hop in and are off on their adventure for this episode.

They pick up a runt known as Wolfgang “Wolfie” Amadeus Mozart and are responsible for babysitting while his parents attend Oktoberfest. While en route to find more appropriate answers about their classical music report, they have to make a pit stop because that squirt of a composer didn't go to the bathroom before leaving. They stop in Macon, GA, and have a most excellent run-in with Little Richard. That's right, I said Little Richard. The rest of the episode is ripe with references to Richard's hits and it makes me chuckle.
Now, being that I am a supremely bodacious babe (or maybe because I'm single and have nothing else to do) I took the time to do a little extra work this month. It was most heinously tortuous to this brain of mine, but I did it for YOU! Half-way through my second full-series viewing - and thanks to some heavy consumption of, ahem, inebriating consumables - I found myself counting how many times I heard “excellent” in an episode. After I got to about 10 instances of that word in one episode, I thought “well, how many times did they say 'excellent' in the whole series?!?” I picked out a few choice words/phrases and here you are (you're welcome):

So there you have it my most triumphantly gnarly toon viewing dudes and dudettes! Grab a huge plate of nachos and an extra-large frosted slushie and settle in for a solid way to spend the day sitting in front of your television. I suggest making it through the second season, just to say you've seen it, but definitely enjoy the first season, I can leave it on repeat all day and not get tired of hearing the air guitar when something awesome happens. Take some time and check it out! Be excellent to each other and PARTY ON, DUDES!
Posted by Phantom Troublemaker at 3:17:00 PM

Email ThisBlogThis!Share to TwitterShare to FacebookShare to Pinterest
Labels: Best Cartoon Ever (of the Month), Bill & Ted, Kalan