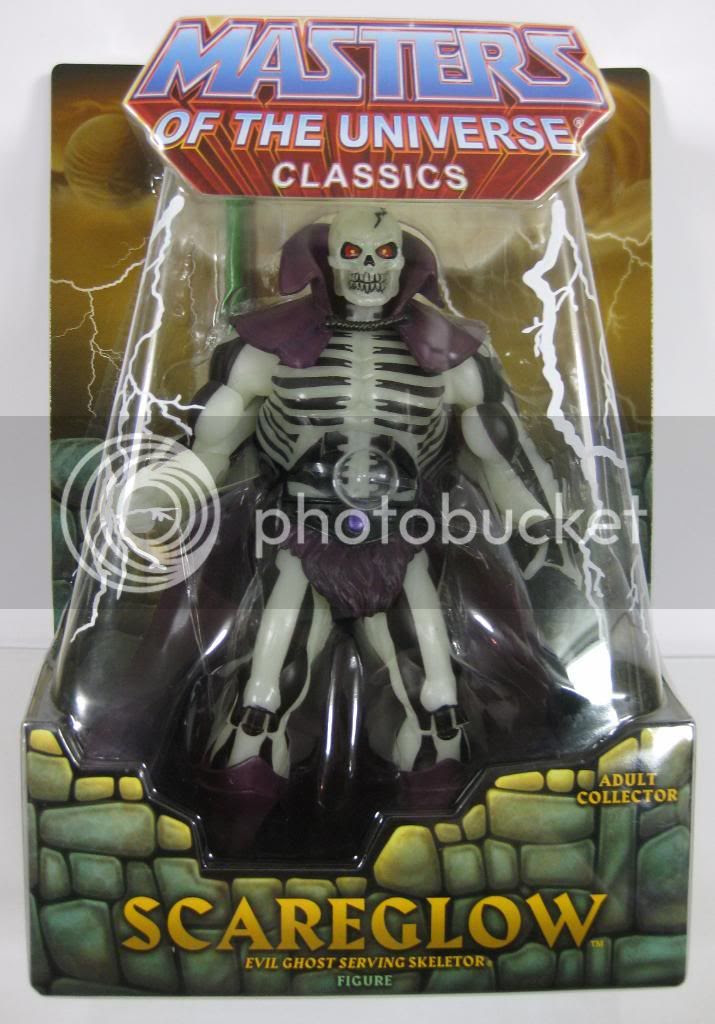 Today’s post comes from a desire to write without actually wanting to write.
What I really want to do is write my Toy Fair recap, but I don’t have internet access and I certainly didn’t attend Toy Fair so I can’t. I’ve made a few notes about some of the things that I know were shown, but I can’t do my usual full write-up. Also, I’m trying to decide how to handle pictures. I don’t want to steal other sites’ pics, but posting them here with their stamp isn’t really stealing, is it? I don’t know. I just know that I tried linking to Action Figure Insider’s pics last year and it didn’t work.
Anyway, a few months ago I spent several hours copying all of the posts out of my old MySpace blog. That was where I started writing and most of those posts are not here on Needless Things. The flash drive with the original files on it got obliterated a couple of years ago, so I had to go to the page and copy the posts. This proved to be a labor-intensive method because of the way the MySpace blog loads.
I wanted to get this Scareglow review onto Needless Things because he is one of my favorite Masters of the Universe Classics figures and was also the first one that I bought. I had been following the line since it began, but – well, I get into that in the review.

I was just going to post this as-is, but I felt like it needed some cleaning up and a few notes. It’s interesting how much my grammar and style have improved since this was originally posted several years ago. I’m not saying I’m perfect now, but this thing was definitely a little rough.
I am not collecting the current iteration of Masters of the Universe figures from Mattel. They look nice and all, but He-Man was always a distant third to GI Joe and Star Wars. Plus they are way too fucking expensive. Yeah, the Ghostbusters cost twenty bucks a pop too, but there are a whole lot less of them (and I may not even get any more, as stated in my Halloween Ghostbusters spectacular). Also, why does Mattycollector.com charge more to ship a six-inch figure than Sideshow charges to ship a twelve-inch one?
Having said that (any Curb Your Enthusiasm fans should know what’s coming), I will still buy the odd Masters figure that catches my fancy. Count me in for Trap-Jaw no matter how many times they make him. I love that guy. I also kind of wish I’d gotten a Hordak when they offered him. I guess any old skull-looking guy will make my list. Obviously, Scareglow is just such a dude. He’s the first of this new series I’ve ordered.
There were just too many things in the above paragraphs that required commenting on. There would have been parentheses every other sentence. First, it’s hard to believe that regular 6” scale figures have hit twenty bucks apiece now. And that I am still buying them. Second, the question of why the shipping costs so much and takes so long has never been answered to anybody’s satisfaction. Third, I am somewhat ashamed of myself for giving into Matty’s tactics and subscribing. Over the years all of the shortages and fast sell outs have become quite suspect given the reappearance of almost all of the early figures at some point or another. 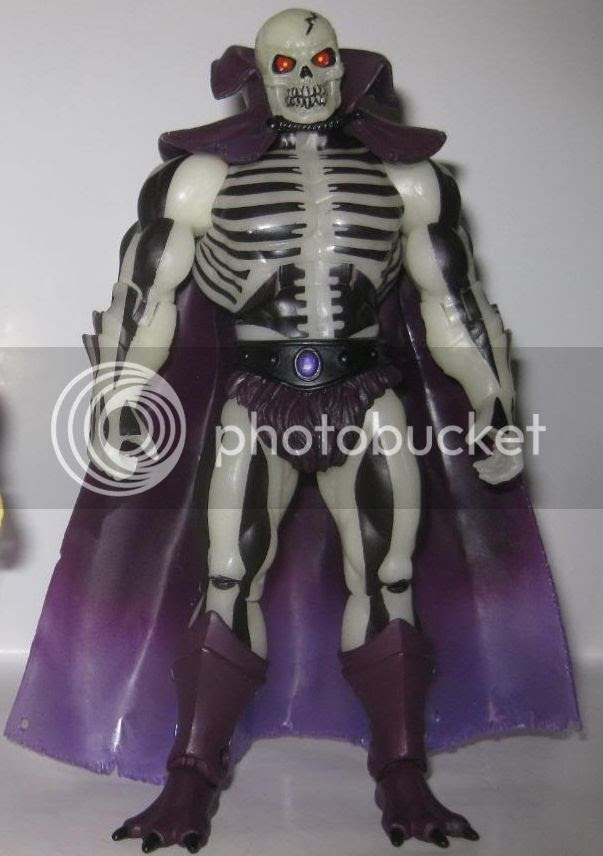 First Glance
He looks less… chubby than the production photo. That was one thing that kind of turned me off of these latest versions. I did my best to collect all of the last series from 2001 or so, but it was because I really dug the sleeker, updated look. These newest figures struck me as being more like the originals – kind of stumpy. Now I see that that isn’t necessarily so. As a matter of fact, Scareglow almost looks a little uncomfortable in his package. Like he’s a bit too tall for it. I’ve got to say - from the moment I pulled the figure out of its plain white shipping box I was impressed. Kind of makes me wish I’d gotten the Skeletor, too.
Which I eventually did. Several, as a matter of fact. Sculpt
I’m pretty sure this is a farmed figure, but since I don’t have any of the rest I couldn’t say for sure. Also, much like Mattel’s DC figures, Scareglow looks so awesome it doesn’t really matter. He sports Mattel’s signature “best 6-inch articulation ever” articulation.
I wasn’t aware at the time that the intention of the line was to mimic the vintage series’ use of shared parts. The 2002 line had been unique sculpts, so why wouldn’t this one? And I don’t know what that comment was about best articulation ever and it being Mattel’s signature. Granted, it is similar to the DCUC articulation, but doesn’t have those hideous hip joints. And it’s very good articulation, but hardly the best. I think I was just pleased with how consistent the profiles were versus Toy Biz’s sometimes ungainly Marvel Legends. I was fresh into Mattel’s DCUC stuff at the time, so I had yet to recognize the extent of their parts farming practices.
It’s pretty much a standard MOTU-style body with furry underpants and a cloak. I’m not too crazy about the wrists, though. There are some kind of gauntlets or wrist cuffs or something that are part of the sculpt. Granted, they are completely painted over by the app that covers the entire figure; but that always bothered me when they did it on the original figures. I didn’t expect it on the new ones.
Other than the weird wrists everything looks good.
Again – I didn’t realize this was an intentional re-use of the Skeletor body because that’s what the original Scareglow was. Now that I know this isn’t an issue for me. It’s just part of the style of the line. 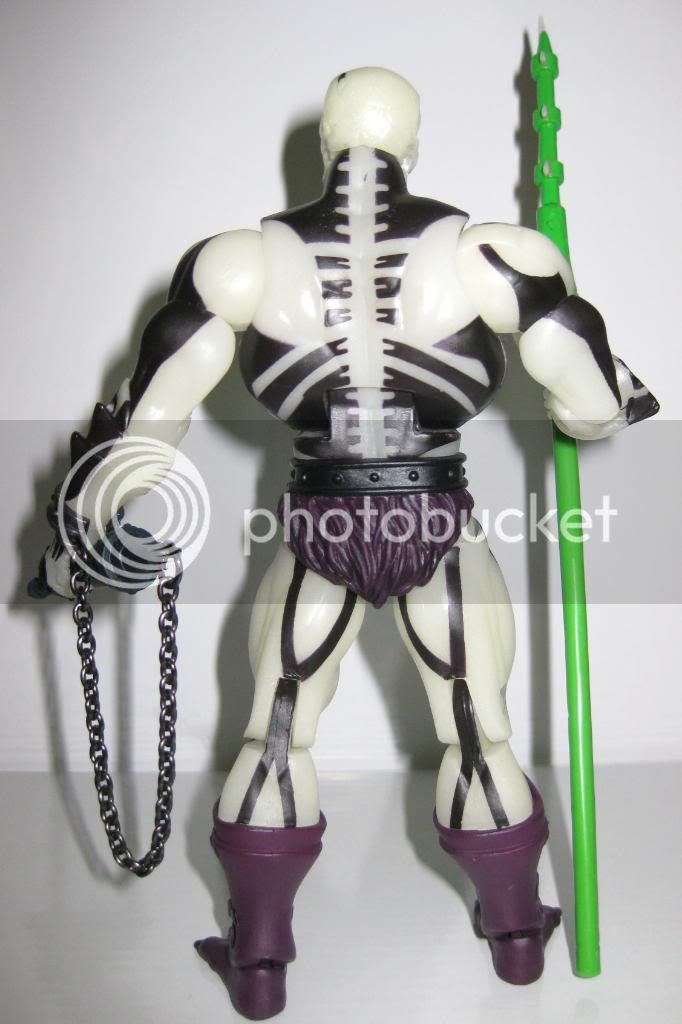 Design
Awesome. I’m very impressed by the deco on this guy. It looks like the whole figure was cast in a translucent, glow-in-the-dark plastic, then detailed with black to create the skeleton design. And it was done so well that I had to stare at it for a while before I was sure of that. I am unduly impressed by the fact that the deco extends around to Scareglow’s back. It would be stupid if it didn’t, but being the owner of a JAKKS Pacific Matt Hardy figure that has the tacky design on only the front half of the pants I can’t help but be happy. Seriously - those cheap-asses stopped the paint app at the seam on either side of the legs. It looks like shit. And Hardy is far from the only victim of JAKKS’ half-assedness. I’ve got a Rey Mysterio that is the same way. The Aztec symbol on the back of his mask isn’t even fucking painted! It’s like a Dollar Store toy, but with the magic of full price!
I find it weird that I was still collecting wrestling figures at that point. Those days seem so far in the past.
But we’re not here to talk about wrestlers – unless you want to pretend Scareglow is La Parka, which would be perfectly reasonable. We’re here to talk about Scareglow. Who glows in the dark like a motherfucker, by the way.
I tried to take a picture of the glowing. I would turn off the lights, point the camera at Scareglow, depress the “take picture now” button halfway to set the shot and – the fucking thing disappeared! He showed up fine in the viewfinder. I don’t know what the problem is. When I told Mrs. Troublemaker about this, she looked at me like I was crazy and asked why I would expect it to show up in a picture. I was flabbergasted. Why would you not? I still don’t understand this phenomena. The bottom line: Scareglow’s glowing effect works great, but you can’t see it here.
I still don’t know how to take pictures of glowing stuff. Accessories
Mr. “Scared to Glow on Film” comes with a cloak (I still don’t feel right saying “cape” unless we’re talking about a superhero), a tiny Castle Grayskull on a chain, and what the packaging refers to as a scythe but what I would call more of a halberd. Because I’m a nerd and Mattel is wrong.
The cloak looks great. It, too is molded out of a translucent plastic. The paint app creates the illusion that the garment becomes less substantial as it approaches the bottom. This effect looks really nice. The “scythe” is a fairly generic-looking Masters weapon. The mini-Grayskull is really cool. It is attached to a chain which is attached to a manacle that clips onto Scareglow’s wrist. If you’re wondering what the fuck that’s all about, trust me - you’re not alone.
I don’t know what my problem was with Scareglow’s weapon. I totally dig it now. And I had no idea about the key inside of his little Grayskull thing.
Thankfully, it was all explained on the: Packaging
Fairly reminiscent of the backing on the original figures. The point of interest is Scareglow’s origin.

If you had walked up to me just a few months ago and said “Scareglow!”, I probably would have assumed you were promoting SyFy’s (I still hate that new spelling. It’s not “extreme” or “edgy” or whatever the fuck they thought it was. Unless they thought “gaytarded”, in which case they nailed it.) newest shitty Original Movie. I don’t remember a Scareglow from the original He-Man line at all. Thanks to Mattel’s handy-dandy packaging, however, I now know that Scareglow was a thief that tried to break into Castle Grayskull to steal the Sorceress’ magic bird hat, but got caught by Fisto (I will never, eeeeeever, not think that name is hilarious); who had Orko turn him into a ghost skeleton. Enraged, the man who would be known henceforth as Scareglow hired Skeletor – who liked this new guy’s fashion sense – to shrink Castle Grayskull down to 1/1-billionth of its original size so he could wear it as a charm bracelet.
Okay, that’s not really the story, but I’m afraid Mattel might sue me for infringement or something if I reprinted it. Honestly, my version isn’t too far off and is kind of better. Overall
I love this guy. Scareglow has made me happier than anything else I’ve ordered from Mattycollector.com, and that’s saying something; because despite all my griping in October, seeing those Ghostbusters in my collection always makes me smile. The only problems I’ve got with Scareglow are the wrists and his not-scythe. I would have preferred an actual scythe. So he gets:
4 out of 5
I’m going to go ahead and up that to a 5 out of 5. Scareglow is an excellent figure and one of the true must-haves of the line in my opinion. Heck – he was my gateway. He was so good that I bought more figures and then outright subscribed.
Damn him for that. 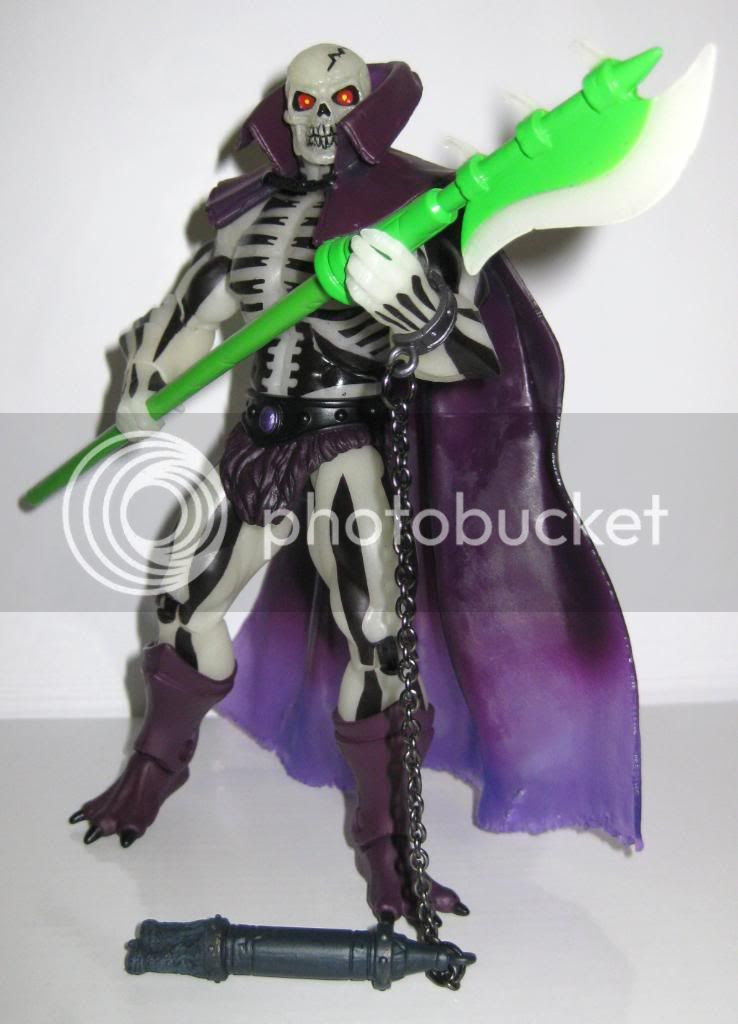 Email ThisBlogThis!Share to TwitterShare to FacebookShare to Pinterest
Labels: action figures, Masters of the Universe, masters of the universe classics, mattel, MattyCollector.com, Scareglow