I love Anchorman. The first one is one of my favorite comedies of all time, if not my favorite. I have watched it over and over again, and there aren’t a lot of post-millennium movies that I can say that about.
In the time between the release of the original movie and the new one, I often considered the possibilities of an Anchorman toy line. It would have to be retro to fit with the movie’s aesthetics. The first option was a line of Mego-style figures, which would be great for likenesses and the 70s clothes. If they were successful and people were crazy enough whatever company produced them could even do accessory packs with different suits and bottles of Sex Panther and stuff.

The second option was a line of 3.75” figures along the lines of the ReAction stuff I talked about the other day. While the Mego-style seemed like a perfect fit, I like the idea of the smaller scale figures with vehicles and playsets. The Channel 4 News Van, the studio, a vinyl mat of the alley where the big gang war takes place. These could have been really awesome.

While I doubt we’ll see the small figures, the Mego-style ones have happened: 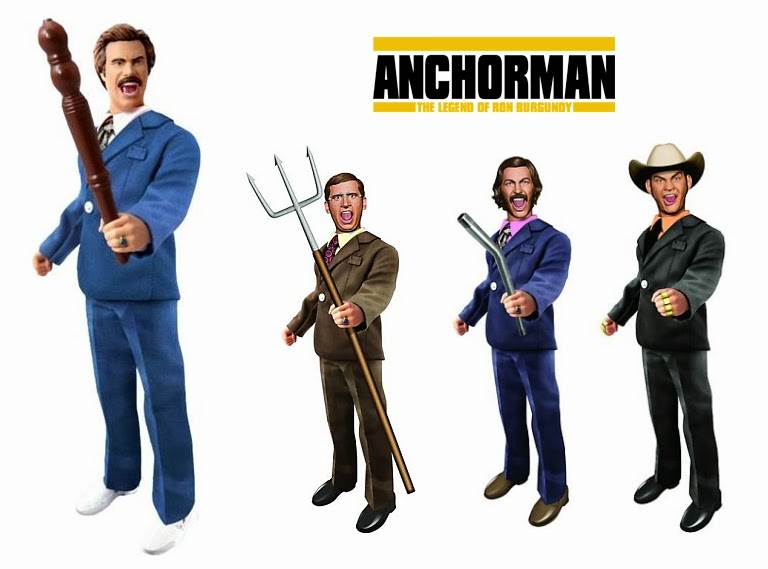 But before those were revealed, Beeline Creative announced the amazing toy that I am reviewing today. It’s definitely rooted in the 70s and is somewhat based on Kenner’s Six Million Dollar Man figure. You never know what the quality is going to be like on a product like this, but I had to have a talking Ron Burgundy. There was just no way around it.

Oh… oh, damn. I did not know about Scotchy Scotch Scotch Vision until this was in my hands. Wow. This head sculpt looks fantastic. Overall the quality of the figure appears to be much nicer than I was expecting. I do wish it was just 12” rather than 13”, though. I hate it when companies do weird, one-off sizes.

The box is absolutely gorgeous, another thing I did not expect. I thought the packaging was likely to be extremely basic, but it looks like Beeline treated this figure with a lot of care and respect. I feel like this isn’t just a cash-in, but something that the company genuinely cared about doing right.

The graphics on the box are wonderful. There are different glosses to the inks used and all of the copy is hilarious. If it wasn’t written by people involved with the movie, it was at least done by people who really get the movie. The print quality is some of the best I’ve seen and the cardboard is thick and sturdy – not the thin stuff I expected. Same with the plastic of the window. It’s thick and durable and doesn’t scratch easily. Perhaps most importantly, the “Try Me!” hole is in the exact right spot and you don’t have to poke around to find the button.

The first thing to address is the Scotchy Scotch Scotch Vision window. Some people simply are not going to like what it does to the face and I get that. Obviously it disrupts what is an otherwise excellent likeness of Wil Ferrell. Also it leaves a big hole in the back of his immaculate coif:

Personally I do not care one little bit because I think this is my favorite feature on any toy I have bought in the last decade. Part of the appeal is that it was such a hilarious surprise, but it’s also just the fact that it perfectly captures the essence of Anchorman. And if you don’t like it, you can always opt for the smaller, 8” Mego-style figure.

The head sculpt truly is wonderful. The shape and texture of the hair is just right. The face is a fantastic likeness, right down to the shape and thickness of Ron’s signature mustache.

Normally I prefer my figures to have neutral expressions, but Ron’s reassuring smirk makes me very happy. The eyebrows are painted and not sculpted, but I think that was a design choice rather than a money-saving measure. The rest of the paint looks great and is placed well. The apps are nicer than what you would’ve had on actual 70s toys, but not so detailed that the figure loses that aesthetic.

From the neck down Ron has a fairly standard body for a figure like this. At least, shape-wise he does. I like the big, huge joints and the lack of effort in concealing them. On another figure this would have bothered me, but for this one it works.

The hands are definitely Burgundy-specific. They are soft plastic to accommodate accessories and have rings sculpted on the fingers. Both rings are painted nicely and the left one even has a gemstone painted on:

Ron also has a watch. It isn’t part of the sculpt, but it doesn’t come off so I don’t consider it an accessory. It’s gold plastic with no paint app, but that’s fine. It looks good and has just enough detail.

The torso is a thing of hairy beauty. The button to activate the sound features is right where the navel would be so as not to interrupt the profile of the figure when you have it dressed – or undressed – for pool party action. The On/Off/Display switch is unobtrusively located under the right arm. It’s easy enough to operate whether the clothes are on or off. The chest hair paint app is great. Obviously the speaker holes are visible, but that just fits with the 70s sensibilities of the toy, like the Scotchy Scotch Scotch Vision. Burgundy’s underwear is conveniently designed to look like Ron’s bathing suit from the pool party scene. It’s just a paint app with no sculpt, but it looks fine.

Ron comes with a pair of loafers, a tie, a jacket, pants, a belt, a shirt, sunglasses, a pair of flip-flops, a robe, a glass of scotch, and a dumbbell.

The suit is fairly cheap, thin material. The seams are good, but there are a lot of rough edges where the material is fraying. It looks fine when the suit is on the figure, but when you take it off it looks kind of cheap. There is a single button on the front of the jacket that covers the snap closure. The jacket has non-functioning pockets but is lacking buttons on the sleeves, which kind of bothers me. The pants are unadorned except for the belt loops, which are pretty sturdy. The belt is just a piece of light material with a buckle attached. It’s nice that it is long enough to stay threaded through the buckle even while you take the figure’s pants off. Sometimes those things are really difficult to re-thread.

The shirt is a bit nicer and more finished looking. It has Velcro on the front as a closure. The collar holds the shape fairly well and sits nicely on top of the tie.

The tie is attached to a piece of elastic and works fairly well. The design is well done and doesn’t look like it’s cheaply printed.

The loafers and flip-flops are just simple, white rubber. Both pairs are easy to get on and off of the figure.

The robe is just a bit cheaper than I’d like. It’s the same sort of material that stuffed animals you win at the state fair are made of and some of the fluff comes off. The cut is good and it does hang well on the figure.

The dumbbell is as detailed as it needs to be. Not much to say here.

The sunglasses look great and are as close to mirrored as plastic could reasonably get. The frames are gold and the paint app is tightly placed. These are made out of a softer plastic and mine were a bit warped, which makes them hard to fit into the holes in the hair that are meant to secure them. Once they are in there, they don’t stay all that well. I might have to use some hot water to reshape them a bit.

The glass of scotch is clearly a very important item, and it was treated as such. It was molded from a very clear, high-quality plastic. The glass is smooth and clean and the scotch inside has some molded ice cubes in the top and is an amber color. This is one of the best glasses of liquid I own, if not the best. It’s far superior to Sideshow Han Solo’s beverage glass.

Obviously this figure is loaded with fun.

The articulation is pretty basic, but is representative of what 70s figures had. You can achieve many Burgundy-esque poses.

Scotchy Scotch Scotch Vision is silly fun. The lens is pretty blurry and you can’t really see anything, but I did my best to get a picture through it anyway:

Every person that sees this toy is not going to be able to help picking it up and trying this feature.

The figure interacts with all of the included accessories fairly well (except for the sunglasses). The hands are flexible enough to hold all of the stuff. The clothes fit well and are easy enough to change. As hilarious as the pool party outfit is, I am going to have to display this guy in his suit.

The sounds are loud and clear:


The button that activates them is easy to press and locate even when the figure is clothed. The assortment of phrases is great – an excellent sampling of Burgundy-isms.

I have other, similar figures that can’t even compare with what Beeline did with this Ron Burgundy. While this is not a Hot Toys or Sideshow quality figure, it also didn’t cost me $250 and is tons more fun than anything those companies release. While I am usually an aesthetics and detail-oriented guy, in this case the fun factor really won me over. I’d take talking, a bathrobe, and Scotchy Scotch Scotch vision over a lined suit and fifty points of articulation that you can’t use because the clothing is so thick anyway.

Beeline set out to achieve a very specific goal with this figure and I think they achieved it. I ordered this as a novelty because I love Anchorman and I love Ron Burgundy, but now I’m happy to have it just for its excellent toy qualities. Beeline could have phoned this one in and still had a fairly decent toy. Instead they pulled out all of the stops and produced something exciting and fun.

Check all of the regular places for this one – Amazon, BigBad, EE. I ordered mine through Previews at the local comic shop and got a bit of a discount for that, so it might be worth your while to see if your LCS can reorder.