The Thing Panel - Days Of the Dead 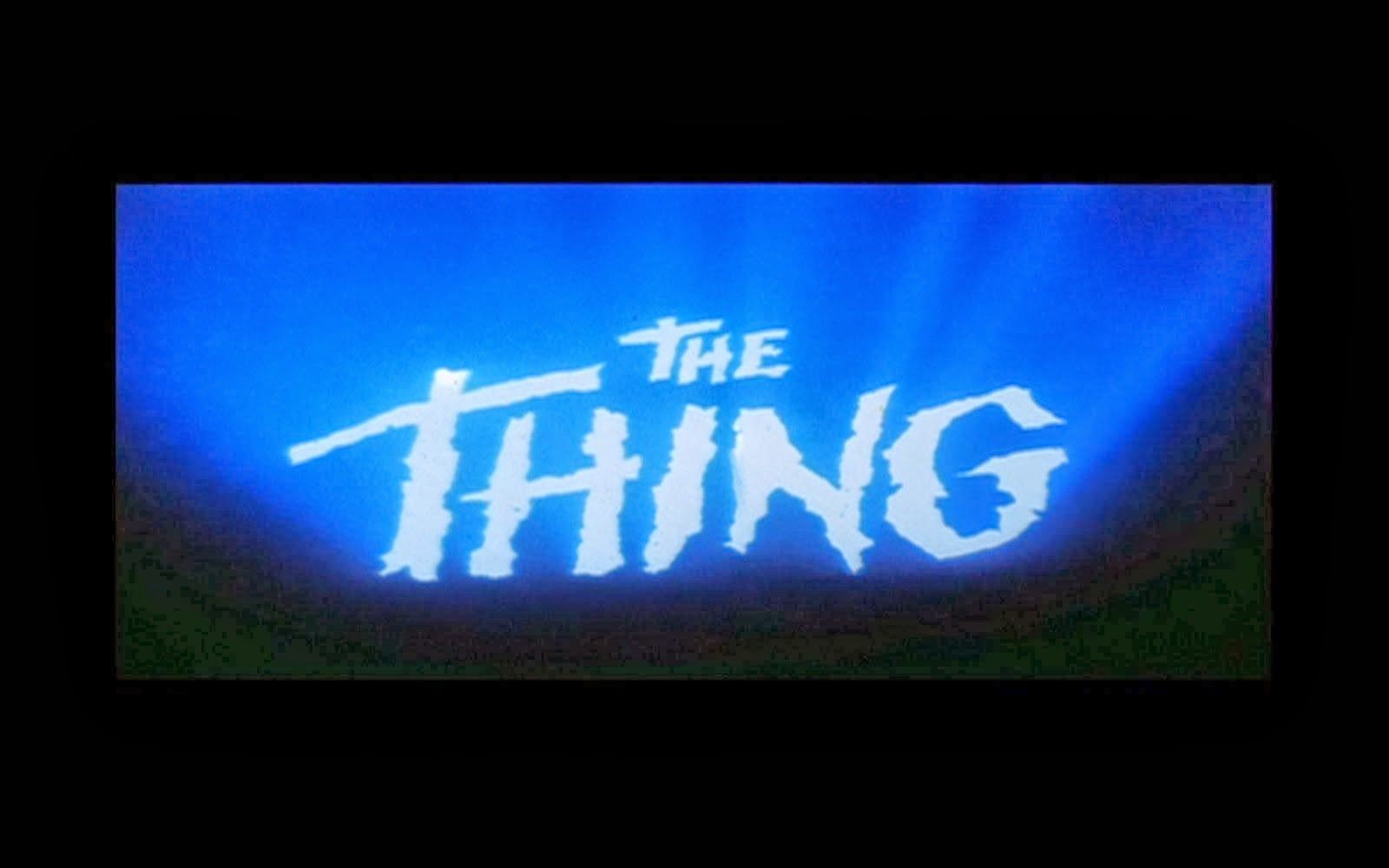 John Carpenter's The Thing is one of the best horror/sci-fi movies of all time. It combines the best of both worlds for me. It has some really gruesome special effects (and this was long before the days of CGI) as well as a compelling and tense story. For those who don't know my short version follows: isolated group of guys doing some kind of something in an Antarctica research station (they never say what they're researching, and almost none of them seem like scientists) find a dog. Dog turns out to be shape-shifting alien. Alien steals bodies so no one can tell who it is. Suspicion, panic, and gory deaths ensue. Kurt Russell fight monsters, Keith David fights the urge to kill Kurt Russell, and Wilford Brimley fights diabetes. Just watch it yourself because it's awesome.


So of course when the Days of the Dead promised a reunion of many of the original cast I was all over it. I've already chronicled my adventures at Days of the Dead in another post so if you want to learn more about the con go read that one because this is going to be all about the panel. I had originally thought I would have it all be in one article together, but it was such a good panel that it deserves it's own time. I had no idea going in that Richard Masur would be a better speaker than Keith David, but then I learned a lot of things that day. Fair warning: it'll also help if you've seen the movie recently (or about a million times so that you know it by heart). If, like me, it had been a little while since you'd seen it you may feel compelled to watch it immediately after reading this. I did, and I appreciated it even more after hearing all these behind the scenes stories. They may not all be in order of how the conversation flowed, but more as I think of them or how good I thought the topic was.

We had expected a little bit of a line, but considering how small the con was and how old the movie is I was surprised at the turn out. They had it in a pretty big space though so there was plenty of room for all comers. We were too far back for my crappy phone camera to get any clear shots so you'll have to make do with stock film pics. I'm sure it'll be better than a really blurry shot of some guys sitting on a stage anyway. Sitting on the panel we had Keith David (Childs), Richard Masur (Clark), Thomas Waites (Windows), and Joel Polis (Fuchs). The hosts talked to quietly to me to understand who they were supposed to be, but I think they were supposed to be big in the local horror scene. I was unaware of a local scene, but that shows what I know.

The first question was fairly obligatory: what do you remember most about filming The Thing? Or something along those lines. The answer was surprising and funny though. They all immediately chimed in with: drinking. Although the movie was filmed in British Columbia they were very close to Alaska, and frequently went back and forth as the set could only be reached by helicopter or a mountain highway. The town where they hung out was Hyder, Alaska. According to Richard Masur, it was an extremely small town that got very busy at night when anyone in the area wanted a drink. And the big drink there was a flaming shot of Everclear. If you could handle it you had been “Hyderized”. From the sounds of it they all frequently got very Hyderized during shooting. Richard Masur also spoke about how dangerous it was getting to the set as they were riding in an old school bus snow covered mountains with sheer cliffs on either side. There were also bald eagles just everywhere in the trees so it sounds all pretty and majestic to. Until he got to the part about how their bus started slipping towards the cliff when they were on their way to the set for the first time. When they finally reached the set they were so traumatized that no one was happy to see John Carpenter coming out to greet them.

From here on out I don't remember specific questions that were asked since there were many long stories between questions. I'm just going to write down what they talked about the rest of the post. The next good story Richard Masur told was about the dog (Jed) that did the most work in the movie. He was only 18 months old at the time of filming, and still very new to being around that much action. He later went on to co-star in The Journey of Natty Gann and White Fang, but at the time of filming they had to be very careful with him. The “dog” is actually half wolf so he was much more wild and intimidating than your average dog. Richard Masur had to work with him the most so he spent the most time training with him. He was introduced to the rest of the cast one at a time in a very controlled setting, and if he gave you a certain look (which you can actually see a few times in the movie) it was time to back off. The dog eventually got used to everyone except for Kurt Russell. Jed hated Kurt Russell right up until the end of filming. Maybe he could sense that Kurt Russell was going to make Tango & Cash and resented him for it. Dogs are smart like that.

So then the talk turned to special effects. I knew that this was some really well done stuff, but didn't realize how well done until this panel. Watching again later I really noticed how intricate all of the sculptures were. It's just kind of tough to tell when they're covered in goo. The special effect workload was so big that the head designer Rob Bottin ended up in the hospital for exhaustion. Now I know that's normally a euphemism for rehab, but in this case I can believe it. He was 22 at the time, and this was a ton of work for anyone to take on. The reason Stan Winston stepped in was to take a little of the load (hee hee...load) off of Bottin so that he didn't lose it completely. Winston basically did the “dog thing” effect, but the rest was all Bottin. It's fairly impressive even by today's standards, but then I'm a purist, and will always think fake blood and puppets are better than computer drawings. Prequel Yoda, that's all I'm saying. In fact one of the only things that Joel Polis interjected was that he thought CGI detracts from movies. Richard Masur jumped in saying that it isn't a bad thing if the director is really invested in the story, the actors, and the process of making a good movie that just happens to have digital effects. In a way I do agree with him, it's just not done enough anymore. Too often the CGI is the movie (again prequels), and someone is just trying to see how far they can push things or how big they can blow them up. But, as usual, I digress. Many of the actors working on The Thing were young, and it was the first movie a lot of them had done. They were mostly stage actors from New York with big ideas about acting. Wilford Brimley brought them back down to earth by saying “You think this about you? This is about that piece of rubber over there”. Wilford Brimley is clearly a wise old man, and I should go eat some oatmeal. 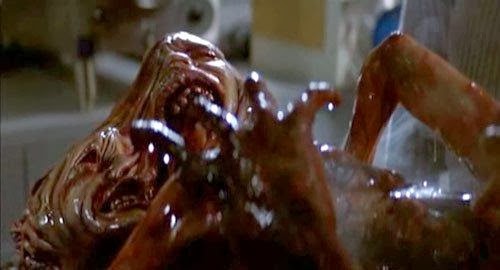 Along the same topic of many of the main cast being young and new to movies: another story was about what a boys club the set was. There were no women on the cast, and only a few women ever came to the set. So when a woman was around they were all fighting for her attention. Being new to movies they also didn't seem to know the kind of manish buffoonery that would be taking place. Richard Masur was wondering what kind of movie he'd gotten involved with when John Carpenter and some of the crew that he'd worked with before were running around sticking their thumbs up each others asses. We also have Richard Masur to thank for the most memorable line of the whole movie. The line Palmer says when the spider head thing scampers out the door behind them, “you gotta be fuckin' kidding”. Was not originally intended to be in the movie. The actor just said it, and I think he said they had already cut. Richard Masur told them that they had better film it, and they'd regret it if they didn't. Luckily, his advice was taken and we have a great bit of humor following a really intense and satisfyingly gory scene. 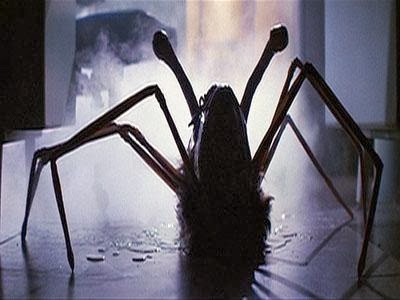 And then just a little fun trivia: Keith David had broken his left hand just before filming began and had it in a cast for most of the movie. The only time you see his left arm in the whole movie is when he is breaking down a door with an ax. I know that's probably on a movie trivia page somewhere, but I got to hear it in Keith David’s amazing voice so if you can just kind of imagine him telling the story it'll make it way cooler than reading it on IMDB or something.

So that's pretty much The Thing panel. I'm sure I left something out, and my friends who were there will beat me up for it later. Sorry Sharron and Rich. I need to start taking notes at the time things happen, but I'm just not that professional yet. If you didn't like The Thing before (you probably wouldn't be reading this) you may have some new thoughts the next time you decide to give it a look. Hopefully they'll even making your viewing just a little bit better. If they don't then at least you've got some more completely useless trivia to shove into your head.