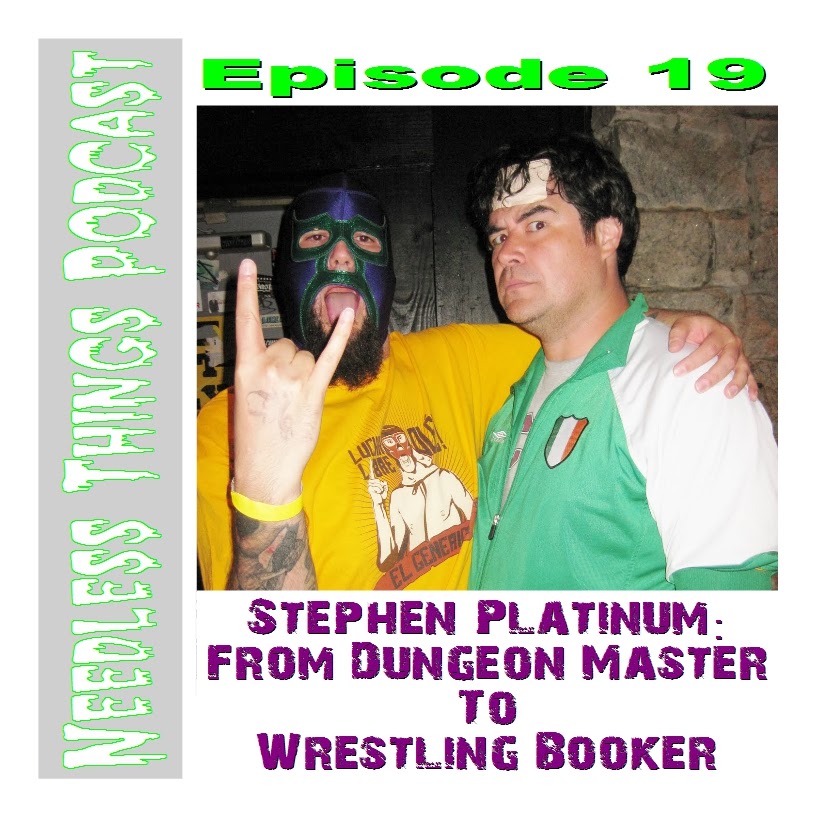 Dude.
Seriously.
If I keep getting what I want on this podcast I am going to get way too ambitious.
I am absolutely delighted to be bringing you an interview with the most brilliant professional wrestling mind I have ever had the pleasure of meeting, Stephen Platinum. But he’s more than just a booker, he’s also a pop culture aficionado, which plays into his booking style in more ways than you could imagine.
I first stumbled across Platinum Championship Wrestling when they were doing shows at The Masquerade. I was impressed with the first one, but as I kept coming back before I noticed that there was something very special about what was going on at these shows. Every match was interesting. Every wrestler seemed to have a sort of niche to fill. There was a place for everything. And they were the best wrestling shows I had ever seen. Not because the talent was incredible. As often as not they seemed to be green and uncomfortable. But the way they were used made that work.

But the guys that were good; well they were amazing. Some of the best storytellers I have seen work.
I followed PCW the best I could after they stopped doing business at The Masquerade. Over time I got to know some of the boys a bit. I’ve even worked with a number of them at Monstrosity Championship Wrestling shows. And the whole reason that I have done that is because I got to know Stephen Platinum.
Every once in a while we would end up having these brief chats on Facebook. But they were never about wrestling. They were always about pop culture or genre stuff and usually it was horror. The thing I love most about Steve is not his ability to book wrestling matches or the outrageous character he portrays or the way that he manages to teach just from having a conversation. The thing I love most is his boundless enthusiasm for entertainment. He doesn’t have the overly critical mind of some jackass running a blog on the internet. He greets everything with a gleam in his eye and a joyful desire to be amused. It doesn’t mean the guy can’t be critical – ask anybody that has ever worked with him. But he wants everybody else to be entertaining. And can see the good things within the bad.
Steve got me my first job in wrestling. When MCW first did shows it was in the parking lot of the Atlanta Zombie Apocalypse. I sent Steve and Shane Morton messages telling them that they needed a ring announcer and that I was their guy. They agreed that I was. We talk a bit about that first night during the podcast.
We also talk about Steve’s life, career in wrestling, and Dexter. His tour of Full Moon Studios comes up – something I’ve always wanted to ask him about – and of course we spend some time on the genesis of PCW (if you want that whole story you need to watch the excellent documentary, The Booker).
I had great fun talking to this man and I think you guys are really going to dig this one. It was hard to wrap up at the end; I think we probably could have talked TV and movies and horror all night. Enjoy!