Days of the Dead Atlanta by Beth V

Hey, did you know I love horror movies? By now you should, and if you don't then it probably just means that it's been too long since I've written anything. Good, bad, or just awful I love them all. Although I'm getting weary of this new SyFy channel trend of making ridiculously bad horror movies on purpose. They're much more fun for me when the filmmakers are operating under the delusion that they're doing something really good. It's like a Mystery Science Theater 3000 movie I was watching with the husband one night, and IMDB said that the guys who made the movie thought it would be funny if it ended up there. That bugged me, and it's the same with horror. Sharknado was fun and all, but it got old pretty quick. Much like Tara Reid at a party (more on her later though). So anyway, it seemed like a natural thing for me to go to Days of the Dead, and I'm glad my horror buddy Sharron suggested it. So along with our other horror pal Rich we headed off to the Sheraton for a day of terror, mimosas, and money wasting.

It was the strangest con I've been to since Phemonicon back when I though all that “praise Bob” stuff was really funny. I mean I knew I wouldn't be getting Dragon Con for a $25 day pass, but this was really small. Not that it's necessarily a bad thing. It meant far less walking since it was only in the Sheraton rather than spread across multiple hotels. It also meant a much less crowded bar (Tara Reid story teaser), and a distinctly better smelling hotel basement than I'm used to. It also led to some fun looks of fear and disdain by other hotel guests since there was also some sort of women's' business convention happening. The celebrities were spaced out in the main halls, and in-between the dealer tables so that in some cases you almost didn't notice them. I almost walked right past Ken Foree because they had him next to a doorway. Poor Butch Patrick had a table set in right next to the door into the dealer room, and nobody was stopping for him at all. I don't know if anyone even saw him (or maybe just very few people at this thing knew who he was). Lita Ford still looks fantastic if anyone was wondering, and Dee Wallace is holding up pretty well for her age.

First off, we were extremely early. Not that we thought we were. The Thing cast reunion panel (the main reason we were there in the first place) was set for 1pm. We thought if we got there early we could get the lay of the land, grab a mimosa, and be in line early for the panel. We got there right at opening and you could still hear power drills going so they were clearly not ready when we were. It's important to note though that the bar in the Sheraton doesn't open until 12:30, so never go to anything there that might be greatly enhanced by a drink as early as we did. Unless you're packing your own.

A few of the celebrities were set up though, and by the time we had figured out where everything was going to be happening there was already a pretty good sized line for Keith David. His was the only autograph I really wanted anyway. I mean he was great in They Live and The Thing, and just about everything else he's ever done. But since I'm also a huge video game nerd I was more interested in having him sign my copy of Mass Effect 3. I wanted to thank him for helping me save the universe, but the line was getting longer, and he was trying to keep it moving, and I got flustered. So I didn't say the most insanely dorky thing I've ever even thought of saying to someone I respect. I guess that's probably okay. It's bad enough that my friends heard me say it. Note to self: kill friends.

On either side of Keith David were Meg Foster and Richard Masur. Meg Foster's eyes have always creeped me out so we moved over to Richard Masur. He turned out to be a really nice guy. He had this super cool Swedish poster of The Thing that he signed for Sharron, and since she was admiring an 8x10 of his head in a fridge from It he just gave it to her. He also called us girls so that went a long way toward making us like him. We had a little time to wander before the bar opened and we could finally get our mimosas before hitting the panel. There were guys wandering around in really elaborate makeup and costumes all day. We saw a surprisingly unsettling group of 6 Michael Meyers wandering around together. There were tons of zombies, an awesome Tucker and Dale (Tucker was even carrying around a severed torso), and Juggalos. The Juggalos were the scariest of all. I wanted to ask them how magnets work, but I kind of thought those guys wouldn't have a great sense of humor. 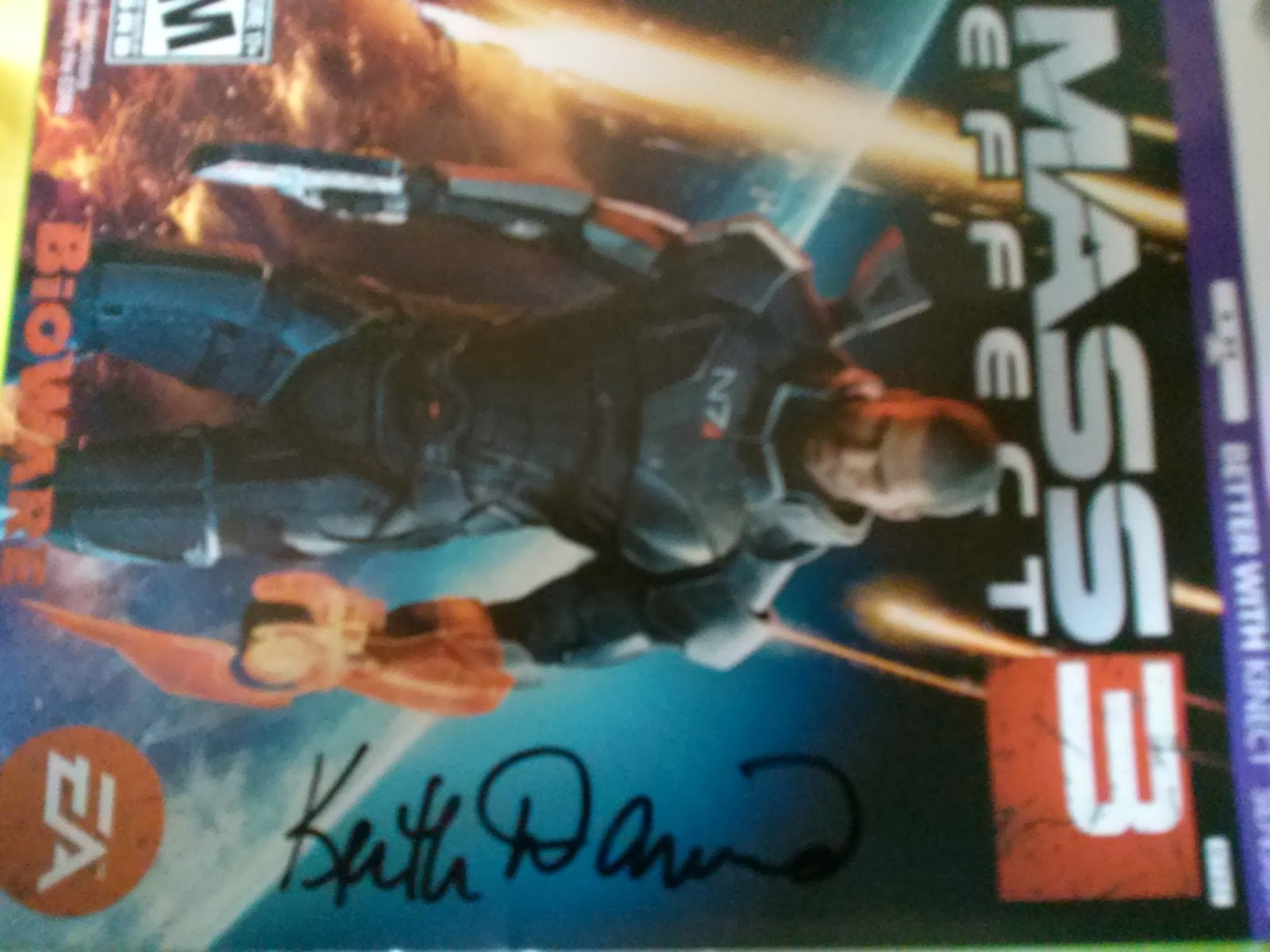 The Thing panel was really good. So good that I'm going to have to write a separate post about it do it justice so check back with Needless Things soon. Of course you should be checking in daily anyway, but that's not the point right now. Speaking of needless things, I did buy some useless crap. I had brought con sized cash with me, and couldn't have it go to waste just because the con was small. I blew $15 buck on buttons and pins to jazz up my boring bag, and tossed $30 away on a fridge magnet. Before you judge me it was a really cool fridge magnet. It was a zombie Ash hand carved from wood from the Evil Dead cabin and carrying a jar of earth from around the cabin. Judge its coolness for yourself: 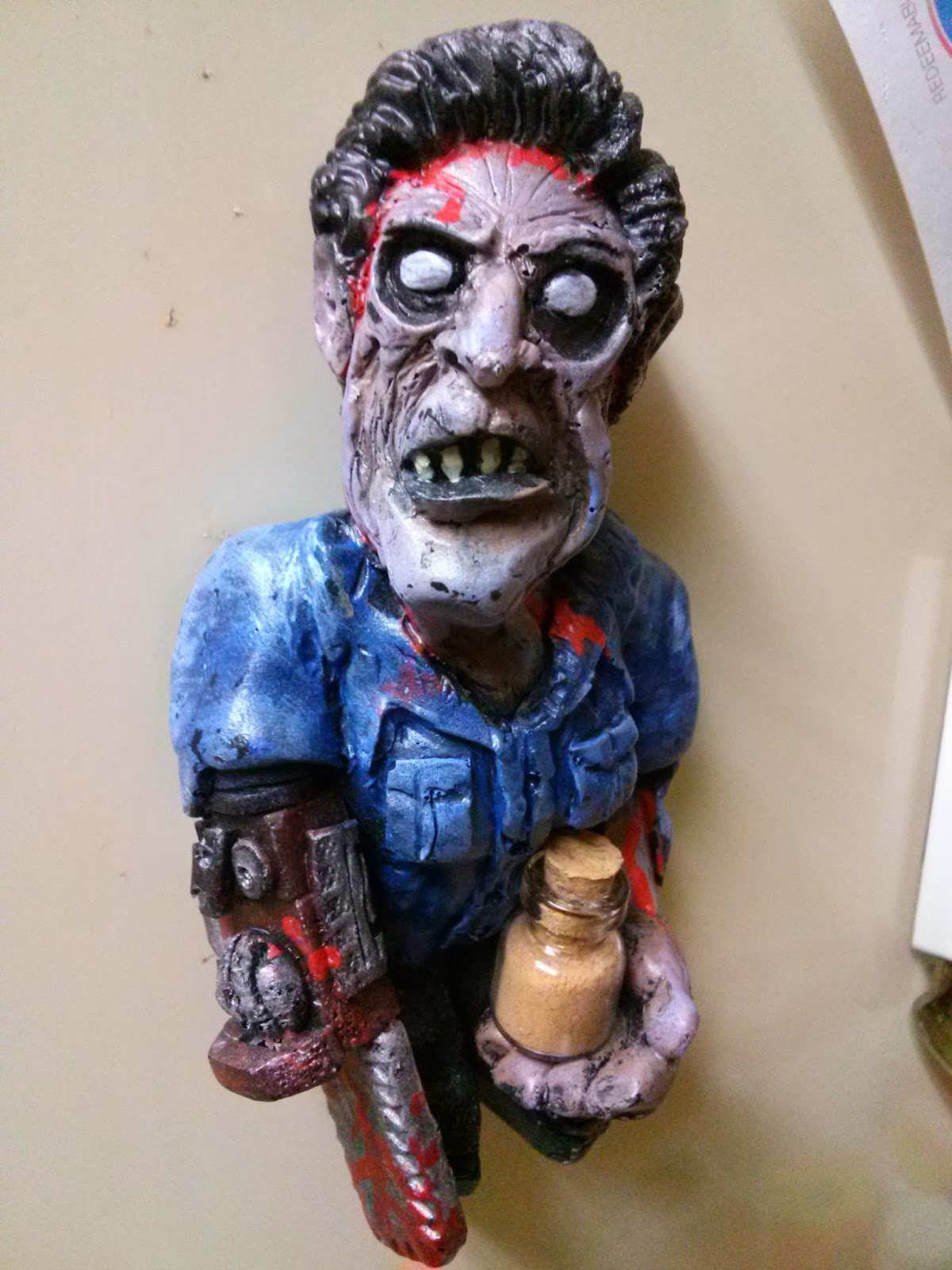 Let's never tell my husband I spent that much money on a magnet. And since he never reads my posts the only way he'll find out is if one of you tell him. I will find you...

So the illustrious proprietor of this site didn't arrive until the afternoon, and Rich went off with him to watch the Dee Snider/guys from Rob Zombie movies panel. As Sharron and I had no interest in that we opted for the bar. I feel like I'm supposed to like Rob Zombie, but I just don't. I hate that whole backwoods, white trash murder family thing that he does. It totally ruined the new Halloween for me. But then that's fairly sacred ground for me. The bar was hopping by this time, and we took the only empty seats at the bar without even looking at who was around us. We sat chatting and watching some weird Olympic sport where you ski and then shoot a rifle. I don't know what it's called, but it's really weird. Then we start looking around. In the seat next to Sharron is some dude, and next to him is the infamous Tara Reid. We soon realize that the two dudes flanking her are her handlers, and it's even more obvious that it will take two of them to keep her upright for long. She's really tiny so I'm sure one would normally suffice, but she's also pretty drunk so probably the reason for the back up dude. Plus it's probably hard to get double teamed if you don't have two guys. Sorry, that was mean, but since it made me chuckle I'm going with it. Unfortunately, the bar was too crowded for us to be able to discreetly eavesdrop on their conversation. Honestly it didn't seem like it was a very coherent conversation anyway. The handlers did us a solid though by holding our seats for us during a smoke break so that was nice. Once we were aware of Tara Reid's presence it did become impossible to pay attention to anything else. It turns out that it's really hard to stare at someone on the sly, but everyone else was doing it, and she seemed to not mind. Or notice really. I think she was pretty far gone because when the bill came she seemed to think that she had paid already. It took both handlers to explain that she hadn't paid yet (at least for this particular trip to the bar). When she finally tottered away (that's the only way to describe the way she walked in her huge heels) Sharron snapped a picture of her bar tab. The fact that her bar tab was less than $30 supports my multiple bar trips theory. I don't know if she's cheap or just couldn't do math, but she tipped less than 20% too. Since there were probably 200 people lined up for her signing session I know she made some money that day. And if anyone ever wants to sleep in the same bed that Tara Reid slept in she stayed in room 229.

By this time we were starting to run out of steam so we headed back down to the dealer room for one last pass before heading out for the day, and I finally ran into the man in the mask. But as he was popular and tipsy we didn't see him long before he wandered away like the important boss man he is (since he's not paying me I feel entitled to crack wise). So money squandered, time killed, and beers drank I left the Days of the Dead both more and less satisfied than I wanted. I think if they get themselves better organized they could really turn it into something. As it stands now it's just a nice little con where you can hang out for a reasonable price. If the guy who played Oogie Boogie in the Nightmare Before Christmas cancels on you then you know you're not quite there yet. Maybe next year I'll have something REALLY good to write about. Maybe next year I'll work up the courage to say something horrifyingly dorky to Keith David.

Email ThisBlogThis!Share to TwitterShare to FacebookShare to Pinterest
Labels: Beth V, conventions, Days of the Dead