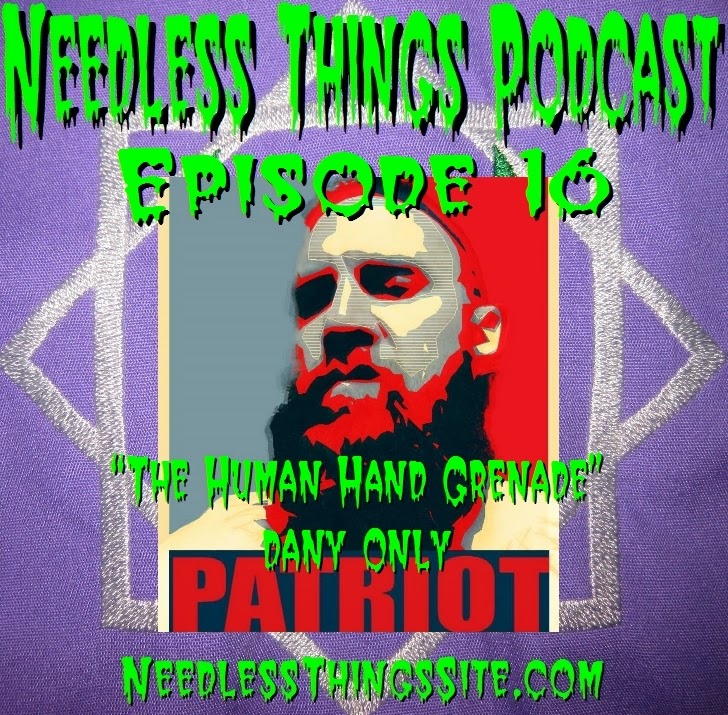 Hey Phantomaniacs – it’s an all-new year and I’m proud to be kicking it off with an interview I’ve been waiting over a year for. My goal is to bring you no less than twenty-four new episodes over the next twelve months, and I have a lot of cool stuff planned.

If you don’t know, dany only (yes, that’s correct – no caps) is a professional wrestler that’s been working the Southeast for over a decade now. He’s a three time APW Tag Team Champion, a former GCW Tag Team Champion, and held the NWA Anarchy Tag Team titles with his partner, Stryknyn, for 77 days. All he ever wanted to do was wrestle, and he does it as much as he can. Over the years he’s developed a strong philosophy about the business and the people in it, and he’s not afraid to voice that philosophy loudly and often.

Sometimes to the chagrin of others.

More recently The Human Hand Grenade has taken up the flag of the patriot, pointing out fallacies in American culture and society; particularly the media. His recent time in Afghanistan opened only’s eyes to the true meanings of both liberty and injustice, and he has brought those revelations back home. Needless to say, this has also caused no small amount of consternation.
I know dany from his time in Platinum Championship Wrestling and Dragon Con Wrestling. The massive tattoo on his chest – “Hated Yet I Persevere” – is what first drew my attention, but his ring work and mic work are what made me a fan. From his time as a heel with the Prophets of Doom to his role as Enforcer of the Empire to his run as the hottest babyface in PCW, only has always been one of the main draws of any card I’ve seen.

We talk about all of this, as well as only’s life outside of wrestling. It’s a fascinating conversation with an intense dude and I’m glad it finally happened. I hope you guys enjoy listening to it as much as I enjoyed recording it.

CAUTION: The Needless Things Podcast is most certainly not aimed at a mature audience, but does contain strong language and maybe even words of a sexual nature, such as “Wankle Rotary Engine”. Please listen responsibly.

Posted by Phantom Troublemaker at 8:37:00 PM