Today’s post is an exercise in sheer whimsy. Because, you know – most of what I put up here on Needless Things is so serious.
I wanted to do something I haven’t done in over twenty-five years – write a list for Santa Claus. A list of all the stuff I would ask for if I were age-eligible for a visit from the jolly old elf. Looking back at 2013, I do think I made the Nice List by a decent margin, so the only question would be exactly how much of my list would end up fulfilled. I can tell you that over the past six years I have become fairly familiar with the standards of judging Naughty/Nice criteria and the main factor seems to end up involving Santa’s resources more than anything else.

So given that, I would expect to see everything on this list under that tree come tomorrow morning. If I were eligible.


This list is really just a compilation of stuff that I feel like I’m missing. Things that are just beyond what I consider a reasonable price, or that are too hard to find, or that just don’t make it onto the quarterly budget. And no – I don’t actually make a quarterly budget. I’m sure I would be in much better financial shape if I did. Though I’d have significantly less toys to write about.

It’s worth pointing out that all of the items on this list actually exist (except for one item that I know should exist, but I’m not sure) and can be bought as they are. I’m not doing any crazy wish list or putting costumes I’d like to have or anything on here. Some of this stuff is ridiculous and unlikely enough as it is. 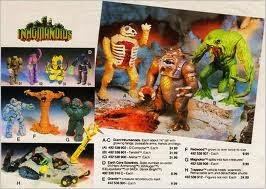 That’s probably enough. I’m sure I’ll do something like this again next year, and I’d hate to use everything up. Of course, I might not even remember that I did it this year.

May all of your Christmas wishes be fulfilled.