Whoniversary: What I Want From the New Doctor by Beth V 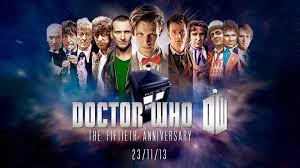 My dad told me that he started watching Doctor Who when he was a kid. He got my mom into it, and (because I had no control over the TV when I was a kid) I was indoctrinated as well. Tom Baker became the Doctor the year I was born, so he's the Doctor I remember seeing first. And even after I got to know the earlier Doctors when my dad started buying old episodes on VHS he was still my favorite. You never forget your first Doctor. Although I may have been initially forced into Doctor Who by simply being in the room while it was on I grew to love it. And I’ve loved it ever since. With a brand new Doctor just around the corner I've been speculating about what the new season will bring. I always start out skeptical when they announce the casting of a new Doctor, but Peter Capaldi could be just the shot in the arm that Doctor Who needs. I got to thinking back to Doctors past, what it was I liked or disliked about them, and what I want to see from this next incarnation of the man in the blue box.


So in no particular order here's what I want to see with the new Doctor:

William Hartnell's first Doctor was very dignified. Jon Pertwee, Peter Davison, and Sylvester McCoy all had a lot of dignity. Even my least favorite Doctor, Colin Baker, had dignity. He just maybe had too much of it. He wasn't some gangly space boy awkwardly flailing throughout time. While Matt Smith could be serious, his silliness stands out much more to me. I like the humorous aspects of Doctor Who, but have grown weary of its goofy overuse. Sure other Doctors have had some funny aspects (jelly baby anyone?), but when I think of Matt Smith's Doctor it is the first thing that comes to mind. Yes he was tough sometimes, and he fought lots of monsters, but he also had to carry a baby around while listening to gay innuendo.
I put a lot of this down to the full takeover by Steven Moffat at the start of the 11th Doctor's tenure. He was fine while Russell T. Davies was still keeping an eye on things (Blink is one of the best episodes of the relaunched series), but once Moffat had full control the show had a tendency to turn into episodes of Coupling. I like Coupling, but its humor doesn't belong on Doctor Who. I know that Moffat also wrote Jekyll and Sherlock, but Jekyll wasn't that great and Sherlock is a crime drama. I've seen the Douglas Adams written episodes from the late 70's (and it's too bad Shada was never finished by the way), but he was at least an accomplished sci-fi writer. He just happened to have good jokes too. Even an old pro like Neil Gaiman was hit or miss during this Doctor's time. So let's bring a little self-respect back to the Doctor. 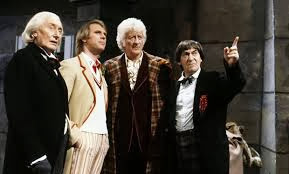 A good companion can make or break a Doctor. I might have liked Colin Baker much more if I hadn't hated Peri and Mel. Peri was Peter Davison's companion first, but she's far more tolerable when she's with him. Well, almost tolerable. If the Doctor is going to keep mainly with female companions they should be more than clever and attractive girls who need the occasional (or in some cases quite frequent) rescue. Leela was a warrior babe, Romana was a Time Lord in her own right, and Donna certainly didn't take any crap. With the recent male companions like Mickey and Rory seeming to be nothing more than accessories for the ladies they traveled with it might be time to see a strong male companion again too though. Mickey was kind of a jealous dope, and poor Rory just died all the time (and not in the “good, I'm so glad Adric's gone” satisfying kind of way). Jack Harkness is the only good male companion in a very long time, and since he wasn't really around that long or often I think the guys are due. Clara is fine I suppose, but there just hasn't been a lot of depth in the character. She's a fast talking, fast quipping, fast running girl and not much more. She's been with the Doctor for such a short amount of time that when she sacrificed herself to save him it didn't really affect me in the way I think it was supposed to. I just saw it tying up the loose end of her mystery. So if she's going to stay on as the 12th Doctor's companion I'd like to see her slow it down a little, and actually build a relationship with the audience and the Doctor (but not in that way. That's my next point). I also think there should be a ban on children on the TARDIS. Having to save annoying children is even worse than having to save helpless women. I know that the kids only came along once, but it sets a precedent, and I would hate to see that continued in any way. 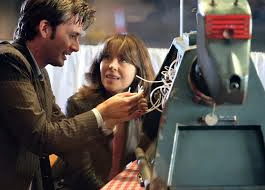 The Doctor is not supposed to be chasing tail. He's a sad, tough, ancient alien who gets lonely traveling the whole of time and space on his own. That, and giving viewers someone to relate to, is the point of a companion. Companionship. Not flirting or kissing or sexual innuendo. Poor Paul McGann has taken the brunt of my ire for making the Doctor a romantic character for years, but it really wasn't his fault that the writers were trying to make it appeal to American audiences. It's our fault for needing everything sexed up over here so that we're given something to root for. At the time American audiences just couldn't make the emotional connection to the Doctor without some love. I think we've grown as a sci-fi viewing country since then, and it's time for that aspect to take a back seat. It's fine for the Doctor to have feelings for, or chemistry with, his companions. If he didn't why would he take them along in the first place? I just don't need to see the Doctor fall in love anymore. Or girls falling all over themselves in love with him. Have the witty banter, but don't have it based on sex or love. Again, it's not an episode of Coupling, and the Doctor and his female companions are not Steve and Susan. If you haven't seen Coupling all of these references will be lost on you so go catch up after you're done here. It's streaming on Netflix, and is pretty funny for the most part, but I think you'll see what I mean.
Watching Amy repeatedly try and jump the Doctor's bones detracts rather than adds to the story for me. That's why I ended up liking Donna so much. They were friends, and that's all there was to it.
Given the age difference between Peter Capaldi and Jenna Louise Coleman I think the romantic aspects will cut themselves out, but you never know what Steven Moffat could do. 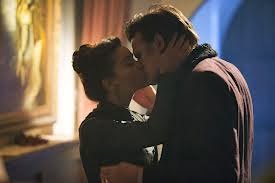 We all love the Daleks and the Cybermen. We all started off loving the Angels, but now I don't care if I never see another statue in Doctor Who ever again. They're done. And the Daleks and Cybermen are heading the same way. They should be scary, but instead are just getting silly. The Sontarans and Silurians have been taken out of the villain zone due to their companion status so they're out now. You don't have to keep using the same monsters over and over again just because people recognize them or liked them a few times. There are 50 years of monsters and bad guys to draw from so do we really need another episode of the Doctor fighting Davros? The Silence was a nice addition so why can't we get some more new evil? Or if we can't get something new how about reviving some old villains that haven't been seen for a long time? The Jaggaroth could use a modern makeover, it's been a long time since the Rani has made an appearance, and CGI could make the Hand of Omega look like it's actually floating now. Before the special effects got special most of the Doctor's monster-y adversaries looked like guys in plastic suits and bad masks (which, in fairness, they were) so there's a lot they could do now that technology has caught up with writers' imaginations.
I hear that the 50th anniversary special is bringing back the Zygons so that may be a step in the right direction. We'll just have to wait and see. 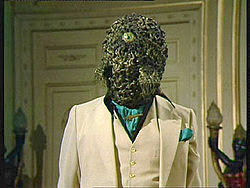 So there, in a nutshell, is what I would like to see from the new Doctor Who. I don't mean for this to be as super critical as it may sometimes sounds. There are so many things I've loved about Doctor Who for so long. It's that love that which makes me want to see it remain the great show it's always been, and keep it going strong for another 50 years.
-Beth V
This week here on Needless Things will be dedicated to Doctor Who. I have Guest Posts, Toy Reviews, and more on the way. The site will be jam-packed – relatively – with content. Please share these links wherever you can and spread the word. And if you’re so inclined, throw a few dollars at the Needless Things family. I have to send you to the podcast homepage because Blogger doesn't want this sort of thing. Just check out the widget on the bottom right here.This is all out of pocket for me, so anything I receive during this time will got to site costs, hosting, and possibly new merchandise if I get really ambitious.


Also, you can buy the Limited Edition NeedlessThingsSite.com Luchador vs. Owlbear t-shirts here. I can’t say they’re selling fast, but once this style is gone, they’re gone forever. And I do intend on being famous one day, so wouldn’t it be cool to have the first shirt I ever designed?


Remember to check in every weekday between now and the 23rd for new, original content.


Finally, be sure and come out to the HUGE 50th Anniversary Party that TimeGate, Earth Station Who, the folks behind The Forgotten Doctor, and (others) are throwing at the Holiday Inn Select; the same location where TimeGate is held each and every year. There will be panels, games, Whovian carousing, and a LIVE recording of Earth Station Who immediately after “The Day of the Doctor” airs. You will literally never have another opportunity to attend a party like this!
Posted by Phantom Troublemaker at 11:00:00 AM