Whoniversary: My Doctor by Robert McIntyre 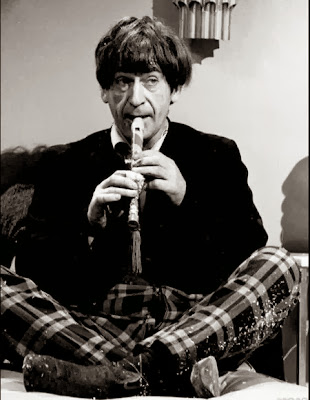 My love of Doctor Who started way back in the swinging sixties, although the swinging part passed me by as I was only 4 when the swinging was at its height in 1965. Swinging to me was hanging from a tree branch and swaying back and forth for as long as I could, they were the days you could play out all day long and just have a bottle of water and the jam sandwich to survive on. We were out every day for as long as we could except for one day, that day was Saturday the one day you would think that we wouldn’t have to worry about the time. However on a Saturday at around 5:30pm Doctor Who - the greatest TV show ever - was on and it was a programme you just could not miss. If you did you had nothing to talk about in the playground on Monday. There was no catch up TV, DVR’s or plus 1 channels - when it was gone it was gone forever, or so we thought in those days. Now I cannot remember precisely when I first started watching Doctor Who but I recently watched the William Hartnell episode The Time Robber. While watching it I realised that I had seen it before so 1965 - the year that episode was shown - would seem like a good starting point on when I started watching the show.

Much of Hartnell’s run is a distant blur to me only made worse with the advance of time and years, however Patrick Troughton’s run is much clearer in my memory and that is why Patrick is my Doctor. I loved this baggy looking comedic man whose clothes never looked like they fit him properly; he always seemed to spend episodes bumbling along and not fully understanding what was going on around him. It was of course all an act that enabled him to blend into the background while he got a full grasp of the situation and he could finally put his plan into act, this was very clever scripting by the writers and brilliant acting by Patrick a fact I did not appreciate until I got older. As a child I just saw the funny little man who despite all the odds always managed to win in the end. It was also for me the golden age for iconic monsters; as we saw the Cybermen, Ice Warriors, and Yetis all make more than one appearance during his time and of course they were all great monsters you could play in the school playground which made them even cooler. UNIT were also introduced during Patricks run which meant monsters began coming to our world. I can still remember been sat paralysed with fear as the Cybermen walked the streets of London in The Invasion. This wasn’t some far off planet the Cybermen were invading, this was Earth, which made it all the more real in my mind. I was convinced that one day I would wake up and find the streets of our little mining village full of Cybermen or Daleks, and that only the Doctor aided by me would be able to save the day. Of cause that day never happened, but if it had I was ready and to be honest I still am! Then one day my Dad told me the devastating news - the Doctor, my Doctor was leaving. It was news that didn’t sit well with me at the time. I was never going to watch the show again. I just couldn’t understand how the show would carry on, but as TV history shows carry on it did because that’s the brilliance of Doctor Who - the main lead changes but he always remain the same. When the dreaded day came I sat there as the Doctor began pulling faces as images of him began spinning round as he began his forced regeneration, although in those day the word regeneration was not used, it was just referred to as change.

Then news came out that a new Doctor had been found in the form of Jon Pertwee. Not only were we getting a new Doctor, but his first adventure would be in colour. The night before Jon’s Doctor arrived on our screens I was laid in bed wondering if Patrick’s regeneration would be shown again. It was a question that demanded an immediate answer and in that pre-internet day there was only one person who would know. Shouting “DAD,” as loud as I could, I heard my farther race up the stairs to see what could possibly be wrong with me. When I asked him if the old Doctor clip would be shown at the start of the new episode he suddenly looked scarier than any monster the Doctor had ever faced, needless to say I didn’t get the answer I wanted but I did learn a valuable lesson - not to ask Doctor Who questions late at night no matter how important they are.

The next day we all gathered round the 12inch TV to watch the new Doctor in colour. Unfortunately for me we only had a black & white TV, but the fact the I knew it was in colour made it all the more special. I will never forget seeing the TARDIS land, the door open, and Jon Pertwee fall out face first on to the woodland floor. The new Doctor was here and all thoughts of not watching the show any more quickly disappeared. At the end of that first episode my dad said ‘’he’s not as good as the last one’’ to which I replied ‘’he is, he’s just different’’, which to this day is how I approach every new Doctor as they all bring something new and exciting to the role. So a new Doctor was in place and my Doctor was gone but little did I know that I would get to see him again. In 1972 Patrick was back in the Three Doctors - a 10th anniversary special that saw the first 3 Doctors face a threat from Omega, a Time Lord trapped in the antimatter universe. This is my favourite Doctor Who story ever, and I still get the same thrill watching it now as I did when I first watched it all those years ago.

I would see Patrick play the Doctor on two more occasions - in the 20th anniversary special The 5 Doctors and the largely forgettable The 2 Doctors alongside Colin Baker's 6th Doctor - before his death from a heart attack in 1987 at the age of 67. For me Patrick Troughton was the most important Doctor in the history of the show. He was the one that made regeneration believable and accepted by the fans who watched week on week. If his Doctor hadn't been so good then there wouldn't be a 50th anniversary of the show - it would have died out in the sixties. So when the call went out from Needless Things for posts on Doctor Who, for me there was only one topic I could write about - my Doctor Patrick Troughton, the best Doctor there has ever been in my humble opinion.

The next two weeks here on Needless Things will be dedicated to Doctor Who. I have Guest Posts, Toy Reviews, and more on the way. The site will be jam-packed – relatively – with content. Please share these links wherever you can and spread the word. And if you’re so inclined, throw a few dollars at the Needless Things family. I have to send you to the podcast homepage because Blogger doesn't want this sort of thing. Just check out the widget on the bottom right here.This is all out of pocket for me, so anything I receive during this time will got to site costs, hosting, and possibly new merchandise if I get really ambitious.

Also, you can buy the Limited Edition NeedlessThingsSite.com Luchador vs. Owlbear t-shirts here. I can’t say they’re selling fast, but once this style is gone, they’re gone forever. And I do intend on being famous one day, so wouldn’t it be cool to have the first shirt I ever designed?

Remember to check in every weekday between now and the 23rd for new, original content.
Finally, be sure and come out to the HUGE 50th Anniversary Party that TimeGate, Earth Station Who, the folks behind The Forgotten Doctor, and (others) are throwing at the Holiday Inn Select; the same location where TimeGate is held each and every year. There will be panels, games, Whovian carousing, and a LIVE recording of Earth Station Who immediately after “The Day of the Doctor” airs. You will literally never have another opportunity to attend a party like this!
Posted by Phantom Troublemaker at 11:00:00 AM