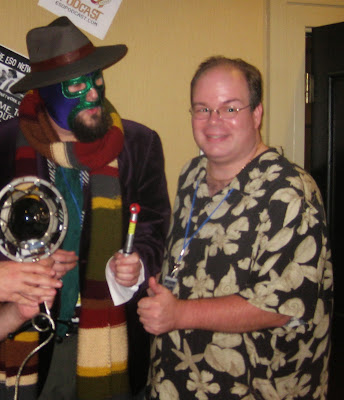 The Doctor Who franchise turned 50 years old last week and in many ways it has never been bigger and better than it is right now. Since I just turned 45 a couple of weeks ago, it gives me hope that my best years may still be ahead of me. The British series has become a world wide pop culture phenomenon and yet it is still a very personal interest of mine. To celebrate the milestone anniversary I decided to go back to where it all began for me, with the Fourth Doctor played by Tom Baker.
I do not remember many details of my childhood. Not because of any trauma, I’m just not wired that way. My sister is three years younger than me, but I have no memories of the time when she was not in my life. As much as I love comic books, I cannot recall the very first one I ever read. I have only a few images in my head of seeing Star Wars for the first time (oddly enough the dewback was something that really stuck with me). And I do not remember the first time I ever saw The Doctor. I wish that I did. However, I am fairly certain it was the Fourth Doctor who caught my eye.

The Boston PBS channel aired Doctor Who episodes weeknights at 7pm. I was unable watch the show with any consistency. It was just too difficult of a time period for me to be available and this was just before the days of VCRs. But I watched when I could and enjoyed what I saw. One of my strongest memories of the series from that time is actually of Leela (I was a teenage boy, ‘nuff said!) I was a young anglophile and loved the Hitchhiker series by Douglas Adams, so the stories were right up my alley. I loved the music and bought the 45 of the Doctor Who theme. One of my good friends at the time was really into the show and even had a long scarf he wore to school. As much as I enjoyed the series, I was not as passionate as him. And for all the episodes I saw, I cannot recall a single whole story arc from those years.
However, I do remember Tom Baker’s performance. No matter how silly the scene or low budget the special effect, I was always convinced that the Fourth Doctor was super-intelligent, compassionate, good with verbal and physical humor, and an alien. Even standing next to the most exotic monster, the Fourth Doctor seemed to be on a different wavelength than anyone else. I’m sure I identified with that to some extent, though certainly not to his level. The character was unlike any I’d ever seen. Even though I’m unable to remember much of the series, the Fourth Doctor left a distinct impression on me.
When Tom’s run was over, I stopped watching the series. (One of the reasons that you’ll rarely hear me mock any of the overly committed Tenth Doctor fangirls is that I can relate. Different reasons, but same results.) I didn’t hate Peter Davison, but I didn’t care for his TARDIS family. I did see The Five Doctors special, but was very disappointed that Tom was barely in it. It was the last Doctor story I watched until the Fox TV pilot in 1996. I was not expecting to see Tom reprise the role, but I felt it was a missed opportunity for a franchise with a lot of potential. I was glad to see it realized in 2005 and have been an avid fan ever since. I love all the portrayals of the “New Who” Doctors and have come to appreciate the classics.

However, one question kept popping up in my head (no, not that question!). The Fourth Doctor was my first to be sure, but was he “My Doctor?” It has been so long since I’d seen any of his adventures, were they as good as what little I remembered? There was only one way to find out. I decided my way of celebrating the 50th anniversary was to watch the entire Tom Baker run to see if it still held up. Not an easy task as there were over 40 stories filmed between 1974 and 1981 and I’m not a fellow with a ton of time on my hands. I’m trying to watch them in order as well.
At the time I’m writing this, I’ve only made it through Tom’s third season. Less than half way through his time as a Timelord. However, I’ve seen enough to confidently say that the Fourth Doctor is indeed My Doctor. I am loving watching these stories! In my humble opinion, Tom IS The Doctor. So effortless, I hesitate to call it a performance. I do not mean to slight in any way all those fine gentlemen who have also played the title role. In fact, many of them I could argue are better actors than Tom. I’d say all of them have the unique ability to be the center of attention in whatever room they happen to be in, which is no mere feat in and of itself. But when Tom Baker enters a room, he owns it.
Better writers than I have tried to put into words what it is about Tom Baker that makes him special. I’m not even going to try to explain it. He simply has “it.” And more importantly, he simply is the perfect being to be cast as The Doctor. Would I feel the same way if I had first seen Hartnell in the role? Or any of the others? Maybe. I’ll never really know for sure. But I have seen other actors in iconic roles and my favorites are not always the ones I saw first. Sticking with the British hero theme, I believe Roger Moore was my first Bond and Basil Rathbone was my first Sherlock Holmes, yet I grew to prefer Sean Connery and Jeremy Brett as those respective characters.
Tom Baker as an actor, as a human being, is larger than life. That booming voice, that curly mop, those wide eyes…utterly unmistakable. I would love to place him in the same room as William Shatner and Adam West as seen how long it would take for the walls to burst. All three get more than their fair share of hate for their limited range onscreen and their attitude off screen. When it comes to the latter, I will in no way excuse any bad behavior towards others. However, I will defend their acting ability ‘til my last breath. These guys are skilled. All three have shown they can legitimize some very ridiculous material. And give them a great script and they’ll make it classic.
Tom surely had some of the best Doctor Who scripts ever written during his run thanks largely to the legendary Robert Holmes. He also had one of the best showrunners of the franchise, Philip Hinchcliffe, for his first three seasons. These two, along with the rest of the fine crew, produced many stories that have become classics. The style and tone was not unlike the Hammer horror movies, but because they were targeted at teens and above, they needed to balance the scary bits with some humor, which played right in to Tom Baker’s strengths.

During this time, the companions were some of the best ever as well. Starting with the ever so lovable Sarah Jane Smith, the Fourth Doctor saw a line up of gorgeous and charismatic gals travelling with him in the TARDIS. Leela, Romana I, and II. I think the only TV character I’m more jealous of is Law & Order’s Jack McCoy. Again, I was a teenage boy at the time and did not mind having a look at the ladies. It made up for having to put up with K-9 who I placed on the annoyance scale only slightly above the mechanical owl in Clash of the Titans. When the Fourth Doctor was assigned Adric as his companion, Tom knew it was time to leave and I can’t say I blame him. I’ve recently seen Logopolis, the final Fourth Doctor story, and Tom appears very tired and ready to move on. The series went on without him and had a few hits, but it was a downward slope until it was cancelled in 1989.
Although the series returned to great acclaim, and as much as enjoy seeing the performances by Christopher Eccleston, David Tennant, and Matt Smith, I always measure them against that of Tom Baker. I thought I’d never have the chance to see them side by side, but I was pleasantly surprised to see Tom in the recent 50th anniversary special, The Day of the Doctor.
The very second I heard that familiar voice off screen at the end of the special, my heart started beating faster and my eyes welled up with tears of joy. My Doctor had returned! Granted, he calls himself The Curator now and there’s a bit of a mystery to his character, but one thing is for sure is that while Tom may be older, he hasn’t lost a step. The screen could barely contain his presence (especially so in the 3D theatrical presentation) and I could not think of a more perfect way to end the 50-year celebration of a franchise I’ve come to love more than nearly any other.
What’s next for Doctor Who and Tom Baker?
Who knows?
Who nose?
But I’ll be there!!!
http://newlegendmike.blogspot.com/2013/10/new-legend-comics-now-available-online.html
-Mike
Posted by Phantom Troublemaker at 11:00:00 AM