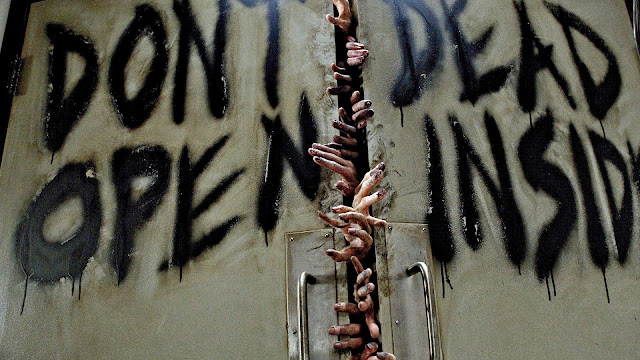 When I read the news announcing a companion series for The Walking Dead my very first thought was “isn't that what Talking Dead is for?”. Upon actually reading the article I was left with more of a “huh...okay I guess” feeling. I couldn't figure out why I wasn't that excited about it. So I started writing this to see if I could understand why I was indifferent to something about one of my favorite shows.

Don't take my apathy as a loss of interest in the show. The Walking Dead has given me some wonderful hours of television despite the many episodes where nothing actually happened. There is enough right about the show to keep me on-board and coming back for more. Sure I had trouble with the last season, but towards the end they really seemed to be pulling it back towards a direction that I can't wait to pick back up on October 13th. I mean no more Woodbury, Rick has stopped all that stupid hallucinating crap, and Andrea's annoying ass will be gone for good. As a side note I can't help wondering how this show made me hate that character so much. I really liked her in the comics, but on the show I was just praying for her to go the way of Dale and Shane. What I'm trying to say though is that this season has the potential to be great. So why another show? I'm sure a lot of it comes down to money. With Breaking Bad over, and Mad Men coming back for its last season (eventually) they've got to do something. And they are making huge amounts of money off this show so I can kind of see why they'd want to franchise it out. From the sounds of it this new show will take place in the same world as the current show, but presumably follow other people and explore different places than the original. I want to be excited about the idea, but again “meh”. And now I think I know why.


Maybe I already feel like I've gotten another perspective on the world of The Walking Dead because I've already followed other characters and explored different places in that world. I saw the devastation in Macon, and the destruction of Savannah first hand. Not through a crazy person's deluded fantasy world (hopefully), but through a video game. I am referring, of course, to The Walking Dead video game which was hands down the best game of 2012. Hands down, it's not up for debate. Just to make myself extremely clear I do mean the Telltale adventure game based on the comics, and not the steaming pile of poop by Activision based on the show. If you like a good video game please steer clear of The Walking Dead: Survival Instinct. I know that watching Daryl and Merle survive in a pre-Ricktatorship world might sound fun, but nothing could be further from the truth. Other than being voiced by Norman Reedus and Michael Rooker this game does everything wrong. It's ugly, short, and so very sloppy. Actually the length might have to go into the pro column because you wouldn't want to spend more than 6 hours with this hot mess of a game. The only reason I included a picture in here is to try and convince you not to waste your time and money like I did. Trust me. I know my zombie games. 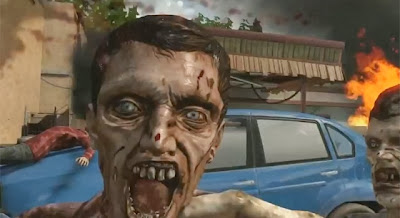 But now on to a completely different rant.

If you haven't played The Walking Dead by now do so immediately. I mean, after you finish reading this. And maybe go make yourself a sandwich - you’ll be in front of the TV for for a while. It's broken into episodes and seasons, but nothing to do with the show. Character cross-overs from the comics give you a little inside information on how a few characters from the comic/show became the people the were when you first see them in the main stories. Other than that this is all new ground. The story is deep and compelling, the pacing is fantastic, and the tension is deeper than any Resident Evil game ever (sorry RE4). I normally hate fetching missions and babysitting a useless character (looking at you again RE4), but here it doesn't feel like a chore. Besides the one girl who can't figure out how to work a radio most of your team is pretty helpful. When she asked me to find her batteries saying “I honestly wouldn't even know what to look for” I seriously questioned how much help she was going to be against zombies. The bitch was really lucky she was a good shot otherwise she would have been bait in a skirt. Adrenaline junkies will be bored stiff (ha ha, zombie puns) by the story driven style. I am reminded of a conversation with my brother where he was talking about having played a really bad Walking Dead game. All through his description of how boring and repetitive the game was I assumed that he was talking about that awful shooter. It wasn't until he mentioned a specific event that I realized he was talking about the point and click adventure game. I'm sure he's not the only one who did have, or will have, problems with the pacing of this game. After all, in the days of Left 4 Dead, Zombie Island, and countless other thrill a minute zombie games this is a huge shift in gears. You rarely have to worry about killing anything. The few times you do use a gun it's actually quite frightening. Whether through conscious choice or an unfortunate programming decision it's very tough to aim and fire weapons in the Walking Dead. That makes it feel even more real to me. For all of my video game induced zombie bravado I'm sure I'd be just as shaky and terrified if the real thing were to ever happen. 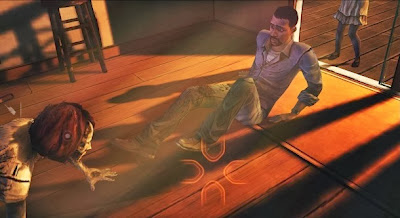 Here you make a lot more choices about what to do, how to treat people, and how to stay the hell away from the undead than you do worrying about the killing. Those choices affect everything from how other people feel about you to who lives or dies. Since your main job in this game is to keep a small child alive you'll have a much tougher time of it if she thinks you're an evil d-bag. But then how can you make a small child understand that in the apocalypse sometimes someone has to die so that you can live? There's no true escape, no hope, no happy ending. You just keep running while pretty much everyone around you dies. Did I mention that I really love this game?

Season 2 (remember that it's set up like a series even though it's based on the comics) is due out sometime soon. Probably to coincide with the Christmas shopping frenzy so now is the perfect time to play it. Or to play it again if you've already gone through once. With 3 save slots you can make different decisions to see how it changes the game. I've got them all filled (3 slots filled...chortle, snicker) with different styles of play. I've got a super nice guy, a ruthless bastard, and a game where I pretty much played through making the choices I think I would make in the situation. It came out kind of neutral. Sometimes I took care of people, and sometimes I let people die because the risks of saving them outweighed the benefits. It's all about survival, and the morally ambiguous things you have to do while trying to get through the apocalypse.

I honestly didn't mean for this to degenerate into a video game review, but once you see how I feel about the game you probably understand where I'm coming from a little bit better. I don't feel like I need another Walking Dead TV show. I've pretty much already got one. A live story that I can be a part of and interact with. I'll still watch the new companion show (as long as it's not a Woodbury based story), but it's got some really big bloody shoes to fill. Probably even harder to fill since there's still a few toes left inside. Remember when you only had to worry about shaking spiders out of your boots? 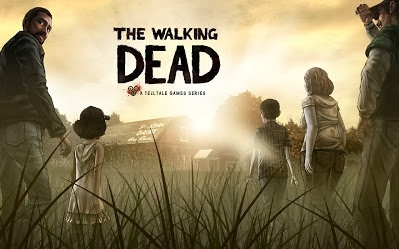 But that's not all, folks! We still have the gargantua-sized Weekend Edition of