31 Days of Halloween: Stop Showing Me the Boogeyman by Beth V 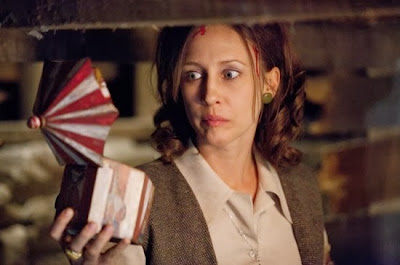 
Now have you ever been walking alone late at night through an empty parking deck or similar creepy area? The poor lighting is casting weird shadows everywhere, and there is a decidedly rapey looking van parked far closer to your car than you'd like. Suddenly, you hear a noise behind you. Was that a footstep, a less than stealthy ghost, the owner of that windowless van? Trying your best not to look like a helpless victim you turn your head ever so slightly, as casually as you can manage, only to see... nothing. Everyone has been in some sort of situation like this, and if you're completely honest you'll admit that you were at least momentarily freaked out. Even after you realized that nothing was there you probably picked up your pace just a little bit. Once safe inside your car you might laugh at yourself, but the human imagination is a bitch. I'm not saying a guy in a hockey mask wouldn't have been alarming, but it's hardly likely is it? The point is; since you didn't see what it was, you can't say what it isn't. Your imagination can come up with an infinite number of unlikely and gradually more horrifying scenarios. Your stupid brain has you convinced that you're about to be the next victim of a serial killer, or a deranged grandpa on a Hoveround, or whatever. Not knowing or seeing what's really happening is what makes it scary. This is what too many movies don't understand. 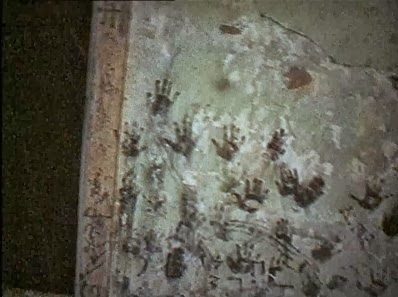 Too few movies try it, and those that do most often don't get it right. The Blair Witch Project springs immediately to mind. The husband and I bought into the pre-movie hype, and saw it opening weekend in a theater full of d-bags. The type of people who tuck their polo shirts into their shorts, and enjoy ruining movies for everyone else. They ever so loudly bitched and moaned about wanting to see the “witch”, and how it wasn’t scary at all. The times that we were able to tune them out we were really and truly scared. Not seeing what the characters saw made the tension higher. I'm also very strongly against the “shakey-cam” film style in general, but it really worked for me in that movie. I think it was also one of the first times I really saw it used so it hadn't had a chance to irritate the crap out of me at that point yet. Now it just makes me a little nauseous. But anyway, if I'd seen it with a different crowd (or an empty theater) I would have left that movie seriously freaked out. Sadly, it's like The Sixth Sense in that you can only see it one good time. Once you know how it's going to end it's just not that compelling anymore.

Most recently the poorly named The Conjuring came oh so close. Seriously, who conjured anything in that movie? If a witch that died a hundred years ago made some sort of deal with the devil that now affects the family living in her house it should not be called The Conjuring. The Bad Investment or The Family That Doesn't Know How to do Research on a Property They're Considering Buying would be more apt. I almost didn't even see it because the silly name and the previews made it look like just another haunted house/possession movie. I've seen a lot of those already, and didn't really feel like I needed to see any more. I had enough friends whose opinions I trust see it, and really like it to convince me to give it a chance. I'm really glad I did. Right up to the point where Lili Taylor was physically possessed I was genuinely unnerved. No easy task with me. Once she went all Linda Blair the tension was gone, but up to that point, damn. It also probably didn't hurt that we saw it late on a dark and stormy night in an almost empty theater. Driving home that night our senses were on high alert as the wind blew around, and made spooky whistling noises through the trees. We were slightly jumpy, and turned on every light in the house when we got home. That's the sign of a good horror movie.


The Paranormal Activity movies get props for trying, but they were just silly. It takes more than random doors closing on their own or someone possibly possessed but maybe sleepwalking to frighten me. I'm sorry if you were one of the people who thought they were scary, but they just weren't. In fact, if you did think they were scary I kind of envy you. It's like having a low tolerance for alcohol. It doesn't take much for you to be a fun date. When I Googled images for these movies everything that came up was people sleeping or just standing around. Not exactly nightmare material for me. 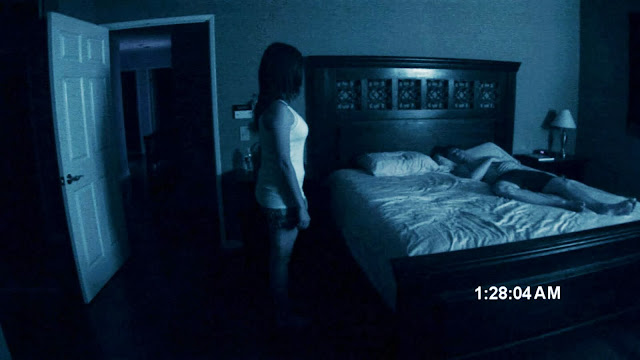 Movies with corporeal killers are a mixed bag too. You know, guys in masks. The terror is still faceless, but much more real because it has a butcher knife. You can tell someone is after you, but you still don't exactly know who or why. Michael Myers was pretty freaky in the first Halloween, but the many sequels ruined everything. The Rob Zombie remake made it even worse. I liked the idea that Michael Myers was just a little kid in a clown costume that went balls-out crazy one Halloween night. I didn't want to see his family as white trash who drove him to kill just because they were awful white trash.

The scene in the original first movie where he stabs the guy into the wall and then tilts his head to the side to look at him is iconic. You don't know what he's thinking right there. It could be wonder, remorse, or even “Hey, a knife is holding him up right now. Neat”. You just don't know because of the mask. The first Friday the 13th had some good moments, but was really just slasher trash. I'll admit that it did mess me up a little bit when I first saw it, but I put that down to growing up in an isolated house in the woods next to a lake. As I wasn't a randy teen neglecting children under my care I really didn't have anything to worry about, but I was pretty young the first time I saw it. The Strangers was a bit of a sleeper, but so good. It was tense, unnerving, and no happy ending. Crazy people just randomly decide to kill two people in a house. Not just kill though. They have to mentally and physically torture them first. And it is some first class torture. The killer do eventually take their masks off, but I like to think it's because they know when they've stopped being scary. If you've been stalking someone all night with a weird mask you hardly need it once you've got them duct-taped to a chair. I didn't think I'd buy Liv Tyler as a scream queen, and I don't care for Scott Speedman but it was really good. We still occasionally search for it on Netflix hoping that they'll have it streaming. It was good enough that even though I know how it ends the stuff leading up to the ending was totally worth another viewing. 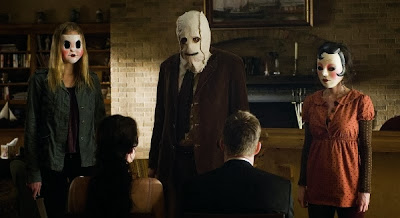 I realize that different things scare different people, and so these movies might not all hold weight with you. Hell, you may not have even seen them all. But shame on you if you haven't. Just think for a minute about the scariest horror movies you've seen. I'll bet they weren't the ones that showed you all the monsters or spoon fed you all the answers like the ending of The Sixth Sense (-1 respect point for anyone who didn't figure it out before the “here's what you should have tipped you off” ending). Most likely the movies that scared you were the ones that kept you guessing, that made you think, or that used your own imagination against you. What scares me is what I can't see. The zombie apocalypse that I'm not at all prepared for. The unknown and lethal things lurking around the corner, under the bed, or anywhere that I'm supposed to feel safe. That's what scares me at least. That, and birds. They have reptilian claws and dead eyes. Some of them can even talk. That's messed up! Who are you to judge me?

I leave you now with the most “oh shit!” moment I have ever seen in a movie: 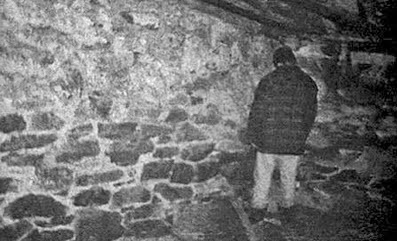