I am extremely proud to be able to present today’s 31 Days of Halloween post. The contributor is a young lady I met at Dragon Con who attended the GI Joe: A Real American Hero panel with her fiancée, Snake-Eyes. They had a blast at the panel and probably gave me too much credit for being able to talk about nerd shit for an hour.
Zartanamiss Prime – as she goes by – contacted me afterwards about writing and doing stuff online. She had checked out Needless Things at that point and no doubt had the same thought many of my contributors have had – “Seriously? I could do that.” This is her first post for a website – not that you can tell – and I am totally stoked to be bringing it to you. This is some great stuff, people.
Zartanamiss will be pursuing her own site soon and I will definitely be keeping you posted. For now, enjoy her review of the SyFy Original classic, Jersey Shore Shark Attack! 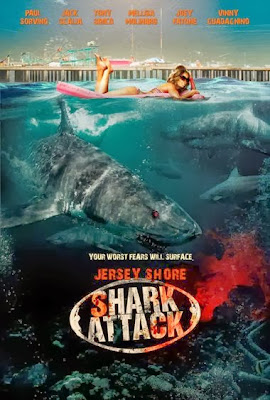 When it comes to Halloween favorites there is nothing like a good old creature feature. I feel the mother of this genre has to be those lovely shark movies. From the beautifully executed cult classic “Jaws” in 1975 to today’s mediocre catch of the day, we love to see fresh young beach-goers devoured by rows of razor sharp teeth. It is, after all, a very real possibility and what is scarier than being eaten alive? Well folks, I have found a hilarious Halloween treat with some one-liners that would be just as terrifying to suffer through. The movie is called “Jersey Shore Shark Attack”.


Though it is not a theatrical equivalent to an award winning pie, this flick is just funny enough to sit down and snack on. Especially the nature of the parody: self-proclaimed, over confident, sassy, sexy Guidos using their heads! This bloody tart came about in the summer of 2012. The plot is easy enough to follow. The Jersey shore was victim to a massive shark attack in 1916 as part of its dark history. But in present day Jersey, during the bustling Fourth of July holiday, renovations and construction on the boardwalk have unknowingly attracted a herd of crazed, flesh-hungry, Albino Bull sharks! It is up to the party animal protagonist, TC - A.K.A The Complication - to save the day as well as his group of Guido friends and the bountiful booties of the Jersey shore.

The first victims to face a watery death are a couple of locals that decide to go for a little night swim in a restricted area. We get a very, very brief intro of the shark and your typical “underwater shark view” to set the killing mood. Our locals play splish & splash for a moment followed by a concerned, “something touched my leg” from our unnamed Jersey girl and BAM! An area of bloody water, they are pulled under, then onto the main characters. Oh, you can also rest assured that there is PLENTY of shitty, unoriginal, techno music to support our main “hip” characters every time the setting changes. This is not a shot at techno, my friend, it was just that bad. I was literally laughing out loud at the sound of these horrid songs, but it just flows right along with the main theme of being a parody.
The cast holds few actors of note. Jack Scalia (All My Children, Red Eye) plays Sheriff Moretti, father to our feisty young hero, TC. Paul Sorvino (Goodfellas, Repo! The Genetic Opera) also has a secondary role as Mayor Palantine. 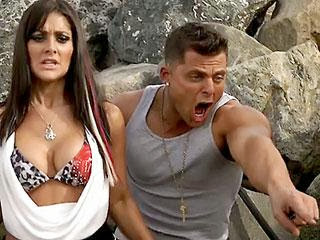 All of the lead roles are played by attractive young hopefuls, some with more under their career belt than others. Their characters are witty parodies of their respected original personalities in the MTV series “Jersey Shore”. We have Balzac, J-Moni, BJ, and JP. My personal favorite still remains to be the saucy, sultry, Guidette leader, Nooki. She’s got a hair bump on her that would put a skyscraper to shame. The uncompromising spunk that backs up her dominant personality is why I like her the best. But some, maybe the male audience *throat clear*, would say her bodacious dumper might shoot her to the top of their list. *enter shitty techno beats*
Our favorite kind of sea monster meanie does not look half bad, for a SyFy Channel movie. Notice how I said “for a SyFy Channel movie”. Holy Hell these things are an abomination to their horror movie predecessors! Of course, they are computer generated sharks whose boundaries are restricted due to lack of a lifelike presentation. But, I find that the sharks bear a striking resemblance to a pissed off, hung over Danny DeVito in a kiddy pool. The one thing I will always contend with as an avid monster movie fan is the lack of real special effects in today’s industry. There is nothing like seeing the actor being torn apart limb from limb in front of your eyes, reach out and actually touch the skin of their destructor. An enemy that is completely computer based will never have the same visual effect. But I suppose we cannot blame the producers for lack of trying when it comes to making a good looking predator. There was one scene in the movie where they actually used a shark they built. Man, that thing is rough. The teeth look great, it is all bloodied from its earlier meals, but the eyes look awfully….derped. The Albino Bull Sharks have red eyes, but that just gives the prop that really fake look. Thanks for trying, special effects guy.

It does not take too long until the main characters figure out what’s going on and get into action. The lack of thrilling deaths in this movie is a bit disappointing. But the hilarious dialog and all around spacey demeanors of the characters almost make up for it. There are two deaths in this whole film that make it all worthwhile. *SPOILER ALERT* One of them is a “legitimate” face of fame: Joey Fatone. Yes, he plays an important role in the shark mania. He is performing a gig for the Fourth of July off of a pier, crowded with screaming fan girls. This is at a point in the movie when the Guidos have figured out details about the boardwalk predators and plead to Joey to warn everyone about the hordes of sharks. He laughs them off and goes on stage to perform. The girls scream louder, the music cues up; we get a coy look from Fatone then WHAM! Out of the water and over the stage, Joey Fatone is eaten alive! The hungry attacker grabs him sideways before it plunks into the water on the other side of the pier. The best part about this whole ordeal is the amount of blood used to spray the crowd. It was very “80’s-esque”, back when there was no limit on the blood budget. Now the Jersey Shore knows to “stay away from the water, bro!”

To summarize this SyFy Channel original film gained just enough attention to obtain a small following of shark film fanatics and your run of the mill “I want to see some douchebags die” kind of audience. The acting was not the worst I have seen, though it does not stand as a compliment by any means. Hungry Albino Bull sharks look good when computer generated, but could always be better as an animatronic being with some Guido hanging out of its jaws. You can take the “S” out of “Snooky”, but you can never take away the Nooki. Lastly, one must take “Jersey Shore Shark Attack” for exactly what it is and always will be: a hilarious spoof on an age old tradition of wanting to be scared shitless by what lives in the water. *Screen fades black, extremely horrible techno song with whiney vocals*

- Zartanamiss Prime
Phantom Troublemaker vs. 31 Days of Halloween
I’m changing the format a bit this year in order to more accurately portray SyFy’s schedule and also to preserve my sanity. I had the genius idea to cut and paste the schedule directly from SyFy’s page rather than typing it out in my own format. This has saved me an awful lot of time and also means that individual episodes are listed rather than blocks of programming like previous years. So what I’m going to do is provide commentary where I feel it is needed rather than posting next to every single entry. Don’t worry – you’re getting the same amount of hilarious, then kind of funny, then labored, then thoroughly disenchanted Phantom content. Just in a different way.
Like last year, I am covering the programming from the time this posts until the time of the next post. That means that on Fridays you are going to be treated to a shit-ton of this stuff.
Let’s do it!
Today SyFy is bringing us twenty hours of Full Retard. That’s not a term I like to use, but there’s just no other way to describe a show that centers around Tracy Morgan talking about scaring people. And it’s not like he even shows up like Ashton Koosher did on his stupid show. Tracy just sits in this weird throne in a studio and does his, “We be getting’ ready to scare some honkies! This is gonna be KARAZAY!” routine.
That might sound retarded enough, but the honkies in question – who, in all fairness are not actually always honkies – are some of the most ridiculous people you’ve ever seen on a television. It’s honestly hard to tell if they’re even actors or not because the majority of them are either a) gay, b) black, or c) gay and black.
Look, I’m not trying to get into sensitive territory here, but I think we can all agree that there are certain demographics that are a little bit more… expressive… about certain things than others. SyFy certainly recognizes it – you can tell from who they cast as victims for Scare Tactics and even as contestants on their newer game show-style program Black Out (yes, seriously). If you think I’m being racist of prejudicial or whatever, try this mental exercise; with no cues from me:
Picture an average white dude in an empty room. Just standing there. All of a sudden a middle-sized lizard drops onto his arm from the ceiling. He knows he is being watched. Think about his likely reaction.
Okay, now the same scenario, but with a black dude.
Again, but with a black lady.
Finally, exact same scenario, but with a gay black man.
If the end results of your scenarios didn’t range from a jump to the side with a startled, “WHOA”,
to an outright conniption fit resulting in the eventual destruction of the empty room with a man-shaped hole in the wall, Looney Tunes-style; well, you’re just a socially dishonest person and probably need to seek help in the form of several viewings of Fear of A Black Hat, Born In East LA, and The Birdcage.
Anyway, there’s no way I can track down enough videos of Astronaut Jones, Brian Fellowes, and general Morgan foolishness to fill up this much Scare Tactics. Instead, I recommend you pour yourself a tall glass of your favorite malt liquor, pour some water over Cheerios, and enjoy SyFy’s marathon.
Oct 28 11:00 AM Scare Tactics Killing Rosemary's Baby

For the 29th, SyFy transitions to a Face Off marathon. Face Off is the best reality show I have ever watched and I really don’t have anything snarky to say about it. Check back tomorrow for another fantastic Guest Post, this one from Son of Celluloid!
-Phantom
Posted by Phantom Troublemaker at 11:00:00 AM