31 Days of Halloween Presents: Pumpkin Faces in the Night (I Remember Halloween)

Halloween isn’t what it used to be.

Yeah - this is going to be a total Old Man Rant, so hang in there.

Back when I was your age we waited until it was dark to go trick or treating. We walked from house to house across every neighborhood in a two mile radius. We actually said, “Trick or Treat” to every single person that opened their door. We did inspect our candy, but only in the most cursory of ways. And nobody ever, under any circumstances, went trick or treating without a costume.
Let me just pause a minute here to address an issue that is very important to me.

If you are the sort of person that would participate in a Halloween-oriented event – whether it be a party, Trick or Treating, or some other kind of themed gathering in the month of October – without wearing a costume, kindly go fuck yourself. Seriously – take some portion of your anatomy that qualifies as a protrusion and violently insert it into another portion that qualifies as an orifice. Repeat.

I take great personal offense at people who would do such a thing. If you are such a stuck-up ass that you think wearing costumes is beneath you or something, then what are you even doing a party in the first place? Let alone a Halloween party. You should be at home drinking weak tea.

Halloween used to be such a massive event. We would wear costumes to school, man. I remember my first years of elementary school and actually wearing full-on costumes. But then the government started whittling away what was “acceptable”. First no masks, then no “evil” characters, then no full costumes; it got to the point where you could basically just wear a black t-shirt and it was no fun anymore and nobody bothered. I think nowadays they can’t even wear black t-shirts.

Heck, we even Trick or Treated at school. We’d have half an hour or whatever to walk around with our class to the other classrooms and get candy. Now the only thing the government allows kids to eat at school are apples and gluten-free crackers.

Once you got out of school, the countdown was on until sundown. That was when you got started, not when you finished. The only Trick or Treaters out before then were the kids under five. And like I said – we walked. Everywhere. A couple of neighborhoods. Nobody would even think of having their parents drive them around.

Get this shit – we don’t have many kids in our neighborhood. Last year we got exactly two Trick or Treaters. They came in a minivan that parked at the bottom of our driveway. The two kids got out, ran up the hill, rang the doorbell, and held their bags out when I opened the door. I waited for the appropriate greeting. Nothing. They just held their bags out. So I said, “Hey, how’s it going?” and the two looked at each other, holding their bags out. I asked what they wanted and they said candy. I asked how they were supposed to ask for candy. Finally one of them said the magic words and the other picked up about halfway through. I gave them each one of those inaccurately named “Fun Size” candy bars. They’re lucky they got anything.

Not everything about Halloween has gone bad. As a matter of fact, it is now easier than ever to enjoy and celebrate the holiday.

One of the things I used to anticipate the most about Halloween was finding out what was going to be on TV. Every year we could count on It’s the Great Pumpkin, Charlie Brown to mark the season, but there were also other animated specials and spookily-themed episodes of the various sitcoms of the day. Some of the best TV ever are the Halloween episodes from The Cosby Show, Roseanne, The Facts if Life, A Different World, and pretty much any other sitcom from the 80s and early 90s. That stuff was so corny and fun but the main point was that even the wacky archetypes on TV were having some spooky fun.
Nowadays we’ve got it even better. I don’t keep track of sitcoms like I used to, but The Office and Parks and Recreation (currently my favorite sitcom of all time) have done great Halloween episodes. Mythbusters has done a few spooky-themed shows. And now that there are whole networks devoted to cartoons we get great Halloween specials from shows like Adventure Time, Regular Show, and Phineas & Ferb.

But the big winners of the pumpkin pie are SyFy and AMC, who feature marathons of horror and creepiness. As you know if you’ve been following Needless Things, SyFy’s celebration of Halloween lasts the whole month of October. AMC’s isn’t as long, but I have to admit that the quality tends to be stronger. And then there’s all of the horror available from OnDemand. Pretty much any fright flick you can think of is there; many of them for free. That’s good stuff.

Finally, there’s the presence of Halloween at retail.

When I was a young ‘un we had maybe one aisle of costumes at any of the major retailers. Lionel Playworld tended to have the best selection, but they were pricey. You could go to Richway, Service Merchandise, or Sears; but there was just that one aisle. Then came the malls and a store called Art Explosion.
Art Explosion was a quirky little retail chain the predated Spencer Gifts. They carried exotic décor and knick-knacks year-round – lava lamps and black lights and MC Escher and Salvador Dali prints and puzzles. But at Halloween they carried all manner of licensed stuff before licensed stuff was a thing. This was the first place I ever saw a Freddy Krueger mask.
Then came Spencer Gifts.

Like a lot of chain retail stores, Spencer was much more specialized and underground when it started. Almost as wild as Hot Topic when Hot Topic first started. Granted, you can walk into Spencer’s (as it is now called) and buy a vibrator now; but the place just isn’t as edgy as it was in the late 80s and early 90s. I can remember dropping by the mall on a weekly – if not more often – basis just to see if Spencer Gifts had put out their Halloween display yet. It was that awesome. The whole front of the store would be darkened, with just black lights and strobes. There would be a wall of nothing but horrific masks ranging from Freddy to Pinhead to zombie clowns to massive creatures that looked like something out of Pan’s Labyrinth (which wouldn’t come out for years). Another four foot section featured full costumes, another had accessories – fake knives, handcuffs, swords, and such. Then there was the makeup section. Fake blood, appliances, eyeballs, nails and razors that looked like they were embedded in your skin. All manner of nastiness. And I fucking loved it. I would save money all year just so I could buy a few things at Halloween. This was before the internet. If you wanted horror supplies you could take a chance and order them from some unknown vendor out of the back of Fangoria or Gorezone or you just had to wait until October at Spencer Gifts.

But nowadays you young whippersnappers can walk into Target and buy a Friday the 13th t-shirt. Toys R Us carries action figures from Aliens, SAW, and A Nightmare on Elm Street. Heck, if you’re in Kroger picking up your cereal and muffins you can also pick up a stuffed witch ready to give a blwojob:

You kids can go to Walmart and buy a pair of glowing, bloody, disembodied breasts any day of the week.
Okay, maybe not.

But you get my point. Walmart, Target, and any other retailer has aisle after aisle full of Halloween choices. Sure, some of them are crappy, generic costumes. But there’s so much.

Never again will a child be forced to look like this: 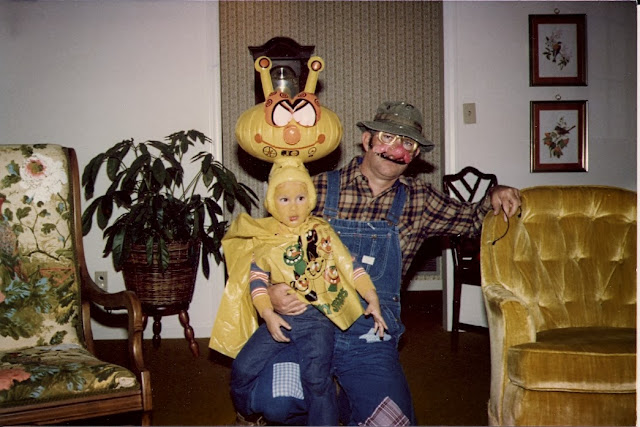 And that’s not even considering Spirit and Halloween City and all of the other seasonal-only stores. I’ve been to haunted houses that weren’t as scary as the Spirit store.

So we’ve got it pretty darn good now. Which is a little sad. Because as much as I still love Halloween, it honestly just isn’t as exciting as it once was. There’s no more waiting for horror merchandise. You can buy it online year round. Anything you want can be had at any time. Halloween stuff shows up in stores (but not Spencer anymore) and is almost immediately supplanted by Christmas merchandise. Halloween may be easier to celebrate, but it’s so common now. I guess it felt so much more special back then.

I guess that’s what nostalgia is all about.
-Phantom
Phantom Troublemaker vs. 31 Days of Halloween
I’m changing the format a bit this year in order to more accurately portray SyFy’s schedule and also to preserve my sanity. I had the genius idea to cut and paste the schedule directly from SyFy’s page rather than typing it out in my own format. This has saved me an awful lot of time and also means that individual episodes are listed rather than blocks of programming like previous years. So what I’m going to do is provide commentary where I feel it is needed rather than posting next to every single entry. Don’t worry – you’re getting the same amount of hilarious, then kind of funny, then labored, then thoroughly disenchanted Phantom content. Just in a different way.
Like last year, I am covering the programming from the time this posts until the time of the next post. That means that on Fridays you are going to be treated to a shit-ton of this stuff.
Let’s do it!
Well, SyFy may have been playing most of these all month long already, but I just can’t fault the logic in a marathon of classic slasher flicks. Granted, it’s pretty lame that they’re repeating Nightmare 4 & 5 so close, but it could be worse. At least it’s not a bunch of natural disaster or bug movies.

And I’m gonna call that the end of both SyFy’s and Needless Things’ 31 Days of Halloween. All that’s left after this is Paid Programming and a bunch of movies with “Meteor” in the title. Given that none of them are followed by “Man”, I don’t give a shit.

I haven’t decided what my November plans are yet. As of right now I’m not posting tomorrow (though that may change – find out… TOMORROW!), but I have big plans for the week of the Doctor Who 50th as well as a very special podcast with Round Ear Spock. That’s gonna be a hoot and a holler.

Email ThisBlogThis!Share to TwitterShare to FacebookShare to Pinterest
Labels: 31 Days of Halloween, halloween, tales from the troublemaker