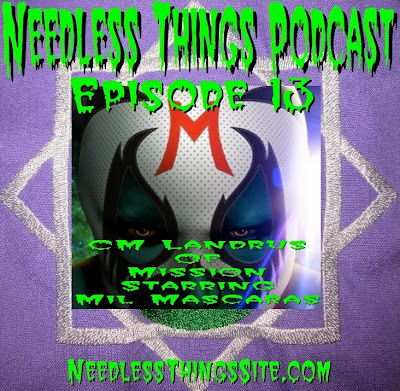 Breaking News: CM Landrus – today’s guest - sent me an e-mail late last night letting me know that the Mission Indiegogo campaign had been put on hold. I don’t know the whole story, but I get the feeling that a few more resources need to be gathered before the film is ready to be as big a deal as it should be. I wish CM and the rest of the crew the best of luck in getting what they need together.
But the bottom line is that this is still a great and interesting interview, that Mission is still a fun project that will happen one day, and that I am still stoked that I was able to do this episode. So Mission may be a bit further off than we thought, but Needless Things Episode 13 is still right here, right now to kick off 31 Days of Halloween!
Before I get into how this podcast happened, I just want to say how crazy-pants ridiculous I think it is that I got to do it.

I got to see Mil Mascaras Versus The Aztec Mummy at the Plaza Theater a few years ago when I was still super fat and it was awesome (the movie, not the fat; although to be honest it was kind of nice eating whatever I wanted, too). This was in my Freshman year of Troublemaking before I had any kind of presence or had done podcasts or panels or interviewed people or anything. Well, I had presence:

A huge presence.
I thoroughly enjoyed the movie and the experience at the Plaza and you can read all about it here.
I never imagined that I might be able to interview the person responsible for bringing a future Mil Mascaras movie into being, but that’s exactly what happened. Thanks to the incomparable Joe Crowe of the Dragon Con American Sci-Fi Classics Track I was able to talk to CM Landrus, the Producer and Director of Mission, the new Mil movie. It’s written by Jeffrey Uhlmann – the man who scripted the last two Mil films. He has a fantastic understanding of Luchador movies and the tone and content that people expect out of them.
So a few months ago I got a message from Joe saying that he was in contact with the people making the new Mil Mascaras movie. He was setting up an interview and asked if I’d like to get in on it. After I reset my eyes and bowtie from reacting like a Warner Bros. cartoon character who just saw a sexy redhead, I told him I’d think about it.
HA HA. I immediately responded that I’d do anything I could to get in on that interview. I assumed Joe was planning on a deal where he’d host and I’d play sidekick monkeyboy. Little did I know Joe had such faith in my abilities that he was going to turn the whole deal over to me. A couple of weeks ago I got another message, this one with contact information, a name, and a missive from Joe saying that he would promote the movie and podcast on RevolutionsSF.com and link to Needless Things.
Whoa. This was going to be my deal.
I was honestly a little nervous because this is the first interview I’ve done where I haven’t’ really had any contact with the person beforehand, but it went very well. There’s a whole lot of information about not only Mission, but Academy of Doom and Aztec Mummy. We also get into how Hollywood works, the massive learning process that is getting a movie into production, and how crowdfunding is different from more traditional ways of financing movies.
You can also follow CM Landrus and Mission at these links:
www.facebook.com/Missionmovie
www.twitter.com/missionmovie
www.filmbreak.com/projects/mission
www.missionmovie.wordpress.com
Now it’s time for the interview. There’s a lot of good stuff here. If you like what you hear, go throw a few bucks at Mission. We need fresh, new Lucha Cinema around this joint:

“Procrastibate” by LeSexoflex.com
“Los Campiones del Justicio” by The Ghastly Ones
And now, Phantomaniacs, it is time for what you’ve all truly been waiting for –
Phantom Troublemaker vs. 31 Days of Halloween
I’m changing the format a bit this year in order to more accurately portray SyFy’s schedule and also to preserve my sanity. I had the genius idea to cut and paste the schedule directly from SyFy’s page rather than typing it out in my own format. This has saved me an awful lot of time and also means that individual episodes are listed rather than blocks of programming like previous years. So what I’m going to do is provide commentary where I feel it is needed rather than posting next to every single entry. Don’t worry – you’re getting the same amount of hilarious, then kind of funny, then labored, then thoroughly disenchanted Phantom content. Just in a different way.
Like last year, I am covering the programming from the time this posts until the time of the next post. That means that on Fridays you are going to be treated to a shit-ton of this stuff.
Let’s do it!
10:30 AM Haunted Highway Utah Skinwalker/Ozark Howler
11:30 AM Haunted Highway El Dorado Hell Hounds/Georgia Skinstealer
12:30 PM Haunted Highway Louisiana Swamp Woman/Pioneer Cemetery
01:30 PM Haunted Highway Silver City Ghost Town/Shunka Warakin
This is the show with what’s left of Jack Osbourne after he realized being a fat prick with an afro was no way to go through life. He drives around looking for monsters, kind of like Josh Gates but with less charm and zeal. I haven’t actually watched this show yet, so I guess I should probably give it a shot.
02:30 PM Fangasm Beam Me Up, Stan
As of this writing I have not watched this show, nor do I intend to. The ads reek of the same kind of nerdsploitation brought to you by The Big Bang Theory and Heroes of Cosplay. Our community doesn’t need more of that kind of abuse. I hope I’m wrong. I hope the show depicts its subjects as thoughtful, interesting individuals who happen to have specific passions.
I’m totally sure that’s what will happen.
03:30 PM 31 Days Of Halloween Movie Drive Angry
I love this movie. And not in an ironic way. I just think it’s a kickass movie with Nicholas Cage playing the intense weirdo that he is. The stunts are awesome, there’s lots of explosions, and the story is totally bonkers.
05:30 PM 31 Days Of Halloween Movie Ghost Rider
I didn’t dislike Ghost Rider. It could have been better, but it also could have been so much worse. I realize that’s not setting the bar very high, but I do watch this one from time to time and enjoy it.
08:00 PM Face Off Tweet-peat - Living Art
I fucking love Face Off. I think it is a brilliantly well done show that presents a fascinating competition in a manner that emphasizes the skills of those involved and downplays personal drama and emotional bullshit. This show is why I had such high hopes for Heroes of Cosplay.
Having said all of that, I have zero interest in knowing what the humanoids on Twitter have to say about this show. I have stated on more than one occasion that I cannot take a “news” piece seriously if it quotes Twitter posts. As soon as I see that I tune out. So I certainly don’t want an actual, good TV show doing that.
09:00 PM Face Off Cosmic Circus
Yes. This is how I watch my Face Off. Free of Tweets. The title “Cosmic Circus” terrifies me, as it suggests that we may well see the alien/clown hybrid that would bring a permanent end to my sanity.
10:00 PM Fangasm A Date With A Supermodel
I am sure this subject matter will be treated in an objective and respectful way.
11:00 PM Face Off Cosmic Circus
12:00 AM Fangasm A Date With A Supermodel
01:00 AM Syfy Original Movie Pumpkinhead: Blood Feud
I am a big fan of the first two Pumpkinhead movies. The rest range from pretty good to the sort of thing that you wouldn’t choose to watch, but might leave on if you were really tired of flipping through the channels.
03:00 AM 31 Days Of Halloween Movie The Pumpkin Karver
SyFy has played the crap out of this movie for the past two years and I still haven’t seen it. What can I say? I’m really busy in October.
05:00 AM Paid Programming
06:00 AM Paid Programming
08:00 AM Ghost Mine, Season 2 Return To Darkness
09:00 AM Ghost Mine, Season 2 The Lost Chamber
10:00 AM Ghost Mine, Season 2 Phantom Intruder
And I thought Ghost Hunters was dumb. This is the same thing, but only in mines. That’s crazy. I mean, how many mines are there in the world? Like, eight? I’ve actually seen portions of this show now and while it is exactly as stupid as I thought it would be, I understand why people are watching – there’s a hot redhead.
In another mind-blowing discovery, it turns out that the whole thing – both seasons(!) – takes place in a single mine. I would say that place must be haunted as fuck, but I’ve seen the show so I know it isn’t.
-Phantom
Posted by Phantom Troublemaker at 11:00:00 AM