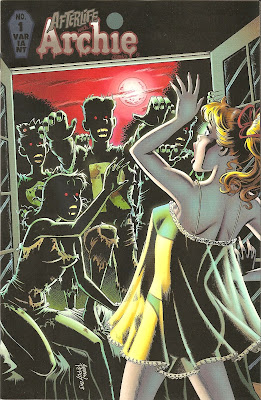 I’m writing this introduction before I have even opened Afterlife With Archie. I want to be sure and get across just how much I have no idea what to expect.
I mean, I know all about Archie – who doesn’t? I know Betty (the nice girl) and Veronica (the rich bitch) fight over Archie. Jughead’s his best pal. Reggie is a rich snob. Moose is the overgrown jock (though I can’t remember if he and Archie are friendly). I think the principal is Mr. Weatherby and there’s an old lady teacher. I know the basics.

Like every year, I am concerned about having enough content for 31 Days of Halloween. I am slightly less concerned this year thanks to the guest posts I have coming in as well as Beth V’s awesome Halloween contributions, but you still worry, you know? So I was at the comic shop today and picked up the new Joker figure with his face torn off but he’s wearing it as a mask. I’ll be reviewing that because obviously not only is it horrifying, but it’s Joker in a mask (hello, Halloween!). But I really wanted a Halloweeny comic to review.

I looked at the list of what was new and the first seemingly-appropriate title was this one. I have never read an Archie comic in my entire life, so I thought this could be a fun review on many levels. Not just for the fact that it was an unprecedented Archie comic about zombies, but also because it would be my first real exposure to that universe. I bought the last issue they had and took it into work with me.

Oddly, as soon as I got into work I got this text from Rescue John (who never texts):
“You should get Afterlife With Archie – it’s awesome.”

That’s a heck of a coincidence right there.

So now it’s well into my shift, I’ve got everything pretty much lined up for the night, and I’m going to crack open my very first Archie comic.

Here’s a look at the back cover before I begin: 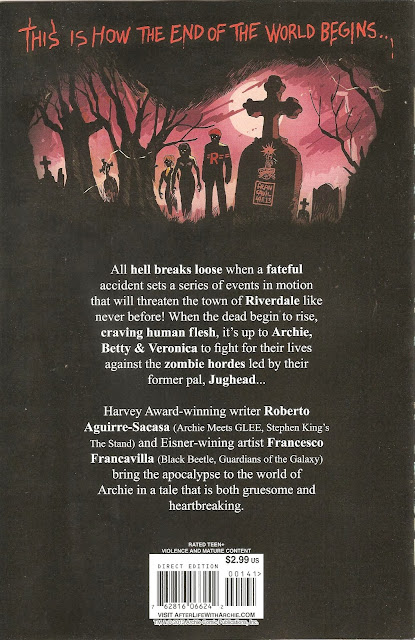 Sounds about like what I expected, but the interesting thing is that the illustration at the top is buy none other than my current favorite working artist, Francesco Francavilla! That’s pretty cool. Then I open the book and holy shit all of the interior art is Francavilla!

My mind is blown.

***
*Minor but not total spoilers ahead*
Okay, so I’ve read the first issue now. My mind is still blown.

While the cover I bought did seem just a bit lascivious for an Archie comic, I decided Betty’s get-up wasn’t much different from a bikini. I was still expecting a fairly family-friendly comic despite the subject matter. Heck, this might even be a zombie story I could share with Lil’ Troublemaker.

The issue opens with the most horrifying thing I could have thought of prior to reading this comic – Jughead’s loyal hound, Hot Dog, has been hit by a car. He brings his old pal to Sabrina, the Teenage Witch and her aunts to see if there’s anything they can do, but sadly there isn’t. Hot Dog was already dead by the time Hilda and Zelda can work their magick on him. 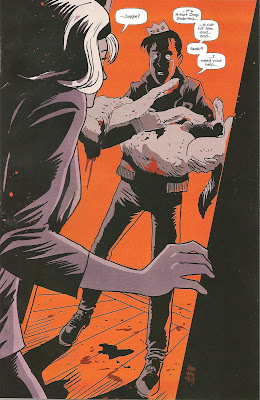 This is all horrible and heartbreaking and not at all what I was expecting. I am most definitely not disappointed, but I can’t remember the last time a comic surprised me this much.

Also, Francavilla’s artwork is beautiful. It creates a dark and macabre atmosphere that is a direct contrast to what you would ever expect out of a comic featuring the residents of Riverdale.
When Sabrina and her aunts can’t help, Jughead goes home and situates Hot Dog in his dog house. But Sabrina just can’t stand seeing her pal in so much pain, and what happens next is straight-up Pet Sematary, but not in a ripoff way; in a tribute way.
Now, as the reader I knew this was a terrible idea. But what happens next is super fucked up, even compared to Jughead’s dog being killed. I am not going to tell you what happens next because I want you to go out and buy this book (which might be hard because I bet it’s going to be sold out everywhere, especially once people start reading reviews).

The next page opens with the caption “The next morning. Riverdale High. (Less than 12 hours to first contagion)”

Dude, what the fuck. This is being set up like any legitimate horror movie. 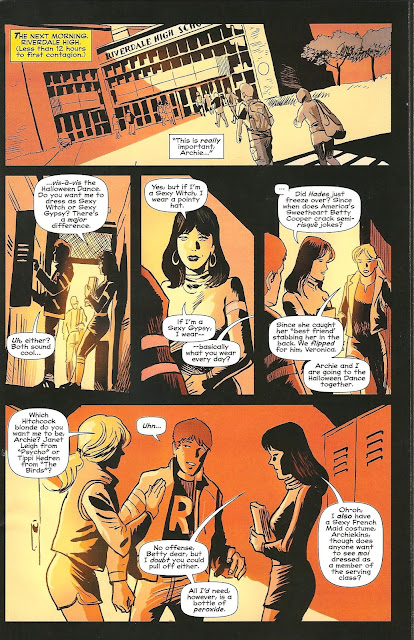 Now we are seeing more standard Archie fare, though Betty and Veronica overtly using the word “sexy” seems like a little more than we might get out of a standard Archieverse book. The two are, of course, fighting over who is going to accompany Archie to the Riverdale High Halloween Dance (because of course they have a Halloween Dance).

Art-wise Francavilla is providing familiar, yet more mature depictions of the characters we all know (even if we’ve never read and Archie book). All of the designs ring true, but the characters are not sporting their familiar exaggerated facial expressions or using over-the-top pantomime. Everybody is subdued and… heavy.

Eventually a terrible secret is revealed and eventually…

I seriously don’t want to tell you anything else. This comic book is so impressive and so awesome that I really just want everybody to read it. If I had the money (and the time to hunt down more issues), I would totally buy a bunch of copies just to give to people to hook them on this crazy fucking book. I had so much fun reading it, and was so surprised by it.

And the thing to remember is this – writer Roberto Aguirre-Sacasa and Francavilla apparently have carte blanche to do whatever they want to do in this world. The mind boggles at what could be accomplished with these familiar characters in a horror setting. Because I doubt very much we’re going to be limited to zombies. I don’t think these guys are going for the Archie gang in The Walking Dead. I get the feeling they’re going for an all-out, gonzo horrorshow that just happens to feature what are traditionally the most wholesome comic book characters this side of Duckberg. And the whole series – like this issue – will be chock full of subtle and not-so-subtle nods to all the horror we know and love. Issue #1 alone features bits acknowledging Pet Sematary, Night of the Living Dead, and even an appearance by everybody’s favorite demonic tome, the Necronomicon!

Buy this book. Buy it now.

Phantom Troublemaker vs. 31 Days of Halloween
I’m changing the format a bit this year in order to more accurately portray SyFy’s schedule and also to preserve my sanity. I had the genius idea to cut and paste the schedule directly from SyFy’s page rather than typing it out in my own format. This has saved me an awful lot of time and also means that individual episodes are listed rather than blocks of programming like previous years. So what I’m going to do is provide commentary where I feel it is needed rather than posting next to every single entry. Don’t worry – you’re getting the same amount of hilarious, then kind of funny, then labored, then thoroughly disenchanted Phantom content. Just in a different way.
Like last year, I am covering the programming from the time this posts until the time of the next post. That means that on Fridays you are going to be treated to a shit-ton of this stuff.
Let’s do it!
Oct 14 11:30 AM 31 Days Of Halloween Movie The Cursed
No, not Cursed, which is a kind of funny but not very good movie starring Jesse Eisenberg and Christina Ricci. This is The Cursed, which I don’t know anything about.
Oct 14 01:30 PM 31 Days Of Halloween Movie Open Graves
I want to watch this one. It sounds like kind of a loony, low-budget take on Final Destination. Plus, Eliza Dushku is in it.
Oct 14 03:30 PM 31 Days Of Halloween Movie My Soul To Take
This one actually is from Wes Craven, but I thought it looked terrible so I’ve never seen it. It bombed at the box office and has abysmal reviews, so it looks like I was right to avoid it. Naturally, I am now very curious.
Oct 14 05:30 PM 31 Days Of Halloween Movie Blade II
Oct 14 08:00 PM 31 Days Of Halloween Movie The Devil's Advocate
Every year SyFy shows this as part of their Halloween lineup and every year I wish they wouldn’t. It’s not necessarily a bad movie, it just isn’t really a horror movie. It’s more like if the Lifetime channel tired to make a horror movie.
Oct 14 11:00 PM 31 Days Of Halloween Movie Nightmare On Elm Street 4: The Dream Master
Oct 14 01:00 AM 31 Days Of Halloween Movie Nightmare On Elm Street 5: The Dream Child
Oct 14 03:00 AM The Twilight Zone Queen Of The Nile
Oct 14 03:30 AM The Twilight Zone What's In The Box
Can anybody out there even hear or see the phrase “What’s in the box” without thinking about Brad Pitt’s panicked, heart-rending delivery from Se7en? I can’t.
Oct 14 04:00 AM Paid Programming
Oct 15 06:00 AM Paid Programming
Oct 15 08:00 AM Fangasm Beam Me Up, Stan
Oct 15 09:00 AM Fangasm A Date With A Supermodel
Oct 15 10:00 AM Fangasm Take Me To Your Lee-der
More of this. Not the least bit Halloweeny, but I’m not rating that this year. Because I totally forgot I usually do that until I pulled up an old post to reference the other day. I need an editor.
-Phantom
Posted by Phantom Troublemaker at 11:00:00 AM