31 Days of Halloween: Costumes by Allie and Tara

31 Days of Halloween is bringing you a special treat today. I have put together a tag team of Needless Things favorites to talk about costumes!
Allie has been here before writing about wrestling and other stuff, while Tara has contributed posts about Dragon Con and her own experiences in the worlds of geekery. So here are two posts combined into one, Magnokor-style, to give you a look at a couple of different costuming perspectives!
Halloween Havoc

Halloween is upon us, and now is the best time for wrestling fans to declare their love for the sport by dressing as their favorite wrestler for Halloween. Both WWEShop and ShopTNA have Halloween packages available, or you can go to your local thrift store and pick up clothes and accessories. Above all, be creative and have fun. Here are a few ideas that might be of interest. 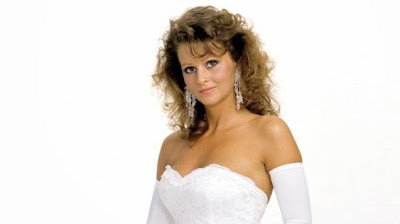 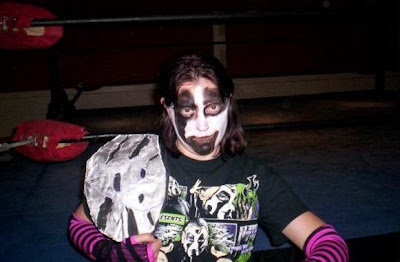 Dubbed the “charismatic enigma”, Jeff Hardy has a unique style that lends itself well to the idea of Halloween costuming. ShopTNA sells authentic T-shirts just like those Jeff Hardy wears to the ring. They also sell Hardy’s trademark armsleeves, but those are easily made using trouser socks or brightly colored tights. Halloween departments at Kroger and Walmart are currently selling a variety of bright colored striped tights. The striped ones work especially well because Jeff Hardy tends to layer his arm sleeves. By using striped tights or socks, one can achieve the layered look using only one pair. Hardy paints his face using bright colors in an abstract design. He posts all of his face paint designs on his Instagram account before every show, so it is easy to find one to copy. When Hardy is World Heavyweight Champion in TNA, he has his own custom belt with a design that resembles his own painted face. 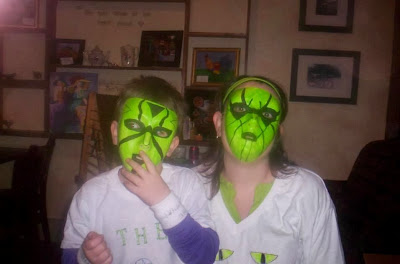 The Batiri are a pair of green-faced demons who are well known for wrestling at Chikara. They sell hand painted masks modeled after their trademark face paint on their website, thebatiri.com, or the more artistic soul can go to Hobby Lobby and purchase a paint your own mask kit and copy the designs themselves. Pair this with either a homemade Batiri t-shirt or one purchased off the official website. 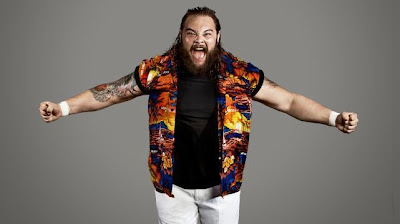 The charismatic Southern cult leader is quickly becoming a fan favorite. WWEshop is selling a Halloween package that contains an official “Follow the Buzzards” t-shirt, Wyatt’s straw fedora, a sheep mask, and a plastic lantern for $49.99. Bray’s outfit consists of white pants, a black tank top, a tacky Hawaiian style shirt, and the trademark straw fedora. All of these items could be picked up at the local Goodwill for far less than WWEshop wants for them. 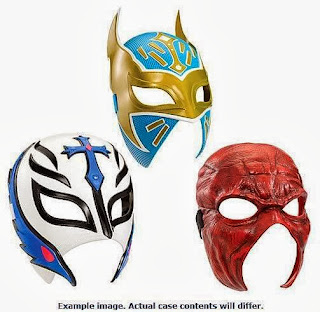 Walmart and Toys-R-Us sell plastic versions of the masks worn by Kane, Rey Mysterio, and Sin Cara. Children could pair either of these masks with a standard WWE superstars t-shirt or the authentic shirt of either of those superstars can be purchased at WWEshop.com. A Kane outfit could be made with a black sleeveless top and black pants. Those who seek authenticity can add flames to their pant legs using fabric paint.
Halloween is the time to celebrate your passions, express your creativity and have fun, and wrestling fans can rejoice knowing that their fandom is well-represented for Halloween this year.
-Allie
A Cosplayer’s Halloween
Halloween has pretty much always been my favorite holiday. Not because of horror movies or candy, though - because of costumes.

Seriously. I'm 30 years old and there has been one single Halloween when I didn't dress up in costume - and that was only because I was in dress rehearsals for a theater production on Halloween that year. (Shoot, now that I think about it, even that isn't much of an excuse - after all, I could have dressed up during the day!)

Now it's no big secret that I love putting on costumes and going to conventions, but I'm not sure I ever would have figured that out if it wasn't for the fact that I love Halloween so much. Since I reached an age where I became the one making my costume choices/purchases, I've usually put them together myself rather than buying them from a place like, say, Halloween Express.

(Granted, this has led to some pretty obscure costumes and people not often knowing who I am, but personally I believe that's neither here nor there.)
So yes, loving Halloween and costumes (and making my own) made stepping into the world of cosplay and conventions that much easier. And on the other end of the spectrum, going to conventions and constantly making new and better costumes means that I always have something great to pull out for Halloween. I mean, let's be honest - cosplayers have the best Halloween costumes. 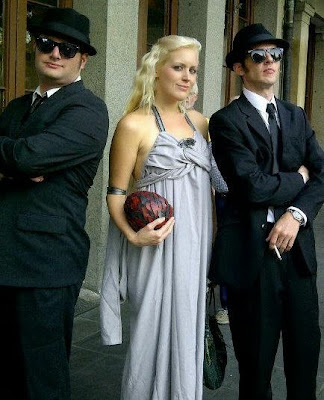 It is known.
And while the idea of mashup and crossplay costumes wasn't a new thing to me, conventions have also taught me that they can actually be something of an art - which means this year I'll be debuting my first crossplay, but not at a convention - on Halloween. For now, though, that one is remaining a surprise...
Regardless whether you're a cosplayer like myself or just someone who loves Halloween for the costume aspect, though, you have to admit that you can't get much more fun than dressing up as someone - or some thing - else...even if it's just that one night of the year. So make your plans - costume and/or otherwise - and enjoy this awesome holiday!

--
Tara
A Geek Saga
Ice & Fire Con
My own personal feelings on Halloween costumes is that you should just have fun. I think Halloween is a time that’s more about just having a good time than necessarily putting the in the time and craftsmanship that you would a con costume. That’s not to say that you can’t make something spectacular and original for Halloween. But this is when you can just go to Spirit and buy the Batman costume or the slutty Ninja Turtle or whatever. I don’t get judgy in October. As long as you have some kind of costume, you’re good to go.
Having said that, I do prefer putting together my own costumes like these two ladies do. I haven’t worn a store bought costume since the werewolf year, and even that one had some clothing alterations and blood.
But the bottom line is this – dress up, go out, and have fun!

Phantom Troublemaker vs. 31 Days of Halloween
I’m changing the format a bit this year in order to more accurately portray SyFy’s schedule and also to preserve my sanity. I had the genius idea to cut and paste the schedule directly from SyFy’s page rather than typing it out in my own format. This has saved me an awful lot of time and also means that individual episodes are listed rather than blocks of programming like previous years. So what I’m going to do is provide commentary where I feel it is needed rather than posting next to every single entry. Don’t worry – you’re getting the same amount of hilarious, then kind of funny, then labored, then thoroughly disenchanted Phantom content. Just in a different way.
Like last year, I am covering the programming from the time this posts until the time of the next post. That means that on Fridays you are going to be treated to a shit-ton of this stuff.
Let’s do it!
Oh, great. More ghost shows. Let’s try something different this time.
Oct 23 11:00 AM Toast Hunters, Season 8 Haunted By Hoagies

I left the title of this one alone because it works for toast.

I might adopt this gimmick. Some guy could be cutting a promo in the ring, nit watching me, then BAM he’s covered in butter.

Oct 23 12:00 AM Pie Mine, Season 2 Eating Lots of Different Pies – Mostly Pumpkin Given the Season

Oct 23 01:00 AM Syfy Original Movie Scream Of The Banshee

In deepest, darkest Scotland – McFeathrby Manor stands alone on the swampy moors. A scream pierces the night! It is the scream of the banshee! And the banshee can only be sated with one thing – Breyer’s Vanilla Bean ice cream!

Outsiders do not understand the strange ways of the backwoods family, the Hudsons. These quiet, strange folk hide away in the forest, waiting for innocent passersby. Then, when travelers’ cars collide with gentle forest creatures, the Hudsons race out of the woods and create delicious and nutritious meals out of what is left behind!

Where he keeps his vast collection of homemade jams and jellies.

An unwary passenger attempts to eat a delicious chili dog in the back of this insidious taxi cab… and drops it! Oh, the humanity!