31 Days of Halloween: Best Cartoon Ever (of the Month) – Dungeons and Dragons by Kalan 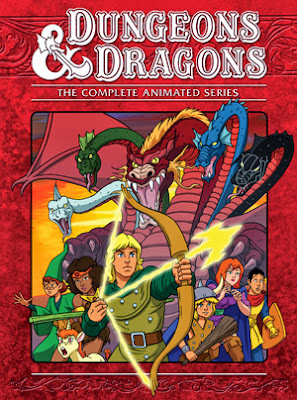 Oh how I long for the days of yore (ahem, the 1980s) when carnivals were carnivals and more importantly cartoons were cartoons! Picture yourself strolling along, enjoying the sights and smells that are so nostalgically tied with a carnival, when all of a sudden you happen upon probably the most awesome ride you've ever seen in your entire life – a Dungeons and Dragons ride! How flawlessly the transition from turn-based role playing game to carnival ride has been made! Your friends (yes, in this bizarre world you have them) have already begun sprinting towards the entrance! All seems well until, wait! What could possibly go wrong?!

Well, if it were me, nothing because I love five-headed dragons and magic and Frank Welker, but unfortunately for the kids in this month's Best Cartoon Ever (of the Month) they're transported into the realm of wonder and peril in Marvel Productions’ Dungeons and Dragons! 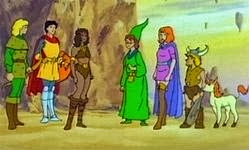 This month we join the ranks of Ranger (Hank), Cavalier (Eric), Acrobat (Diana), Magician/Wizard in Training (Albert/”Presto”), Thief (Sheila), and her younger brother Barbarian (Bobby). Bobby adopts a little pet unicorn that is aptly named Uni and exquisitely voiced by Welker. Their guide through this realm is Dungeon Master. Basically, he appears out of nowhere, delivers a riddle about the upcoming adventure and disappears until the heroes and heroines are in ubiquitous danger or they figure out the riddle in time to safely vanquish their foe(s). Hank and Eric are the oldest of the group. While Eric is busy complaining and being the butt of most of the jokes, Hank steps into the leader role. The two ladies are the voices of reason and moral compasses. They're also pretty suggestively dressed, since they're 14, I can't say they're hot, but, * whispers * they're pretty hot. Presto and Bobby are the youngest and are frequently the ones in need of saving. The group occasionally has some dissent within it, usually from Eric. Sheila is most often the one who steps in and forces the dissenting party to conform to the rest of the group.
The group quests for a way back to their homeworld. It almost always involves helping someone in dire straits and they always get just to the point of being able to return before they're drawn back into the realm.
Aiding in their battle, each kid has their own magically charged weapon that serves some meaningful purpose in this realm. Hank has a bow and arrow, Eric a shield, Diana has a staff that extends and retracts to make it easy to carry, Presto a wizard's hat, Sheila's hooded cape makes her invisible, and Bobby has a club. Presto kinda has the advantage as a wizard, but he isn't adept whatsoever in using his powers. To be honest, it's kind of a letdown since he is the nerdiest one out of the group and he doesn't know how to use magic. It seems like he's letting the rest of us down by being a bad nerd. However, I suppose we all have our nerd strengths and weaknesses, haha. 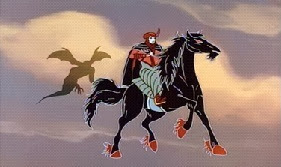 Our group is persistently threatened by a supremely formidable bad dude – Venger. This master wizard-demon is all-powerful and represents supreme evil in the realm with the ability to access portals to the kids' home world and poses as serious a danger to Earth as to theDungeons and Dragons world. The only thing he fears is Tiamat, yes, TIAMAT the five-headed mother of all dragons. Venger resides in a castle built on top of a volcano, which as far as evil lairs go; that's a pretty good idea. There is a dungeon suspended over some lava with a drawbridge being the only access to and from. One may think if a certain wizard demon were truly all-powerful that said wizard-demon could vanquish a half-dozen scrawny punks, but their weapons coupled with the hints and help from Dungeon Master prove the constant bane to his victory and domination of the universe.
There is an acceptable assortment of feature creatures. We get bogbeast, bullywogs, regular dragons, faerie dragons, giant insects, snail men, unicorns, flying monkeys, Welker-ized Lizard Men, Orcs, Phantom Stalkers, halflings - even Merlin makes an appearance.
While it isn't usually one of those things that sticks out about a show, Dungeons and Dragons has some of my favorite titles for cartoon episodes ever. They're ominous, spooky, and just outright awesome. They would make GREAT B-Movie titles and/or death metal albums, so that's probably got a lot to do with why I am so thrilled by them. There were 27 animated episodes and one last episode that was never produced. The first episode is called “The Night of No Tomorrow”. Others that get a big thumbs up are “The Hall of Bones”, “Servant of Evil”, “Quest of the Skeleton Warrior”, “The Dragon's Graveyard”, “The Dungeon at the Heart of Dawn”, and “Citadel of Shadow”. It didn't have too long or short of a run, I feel it was pretty spot on - 27 episodes over 3 years. Apparently one can find the script for the 28th episode on the internet somewhere, and according to some sources it was read through as a radio drama on a DVD release. I will say that I enjoy the later episodes in the series more than the first part. Not that the whole series isn't completely bad ass, it just has some more interesting plot lines as the series progressed.
Probably one of my favorite parts of this series, as with many others in my collection, is the fact that someone had a brilliant idea; “hey, so we have Frank Welker....why waste time and money on other voice actors?” Like so often in his illustrious career Welker is given ample opportunity to make a multitude of characters magnificently bad ass sounding. There is even a whole race of characters, Phantom Stalkers - in “The Garden of Zinn” episode - that are Welker-fied as well as King Solaris in the same episode. I mean, we're talking epic Welker-itude and you know how happy that makes me. We also get a little treat every time Venger opens his mouth, thanks to Peter Cullen. I think Cullen also got the opportunity to voice some more minor characters. If I had been a producer on the show, you can bet they would have had ample opportunity to voice whomever and whatever they wanted. 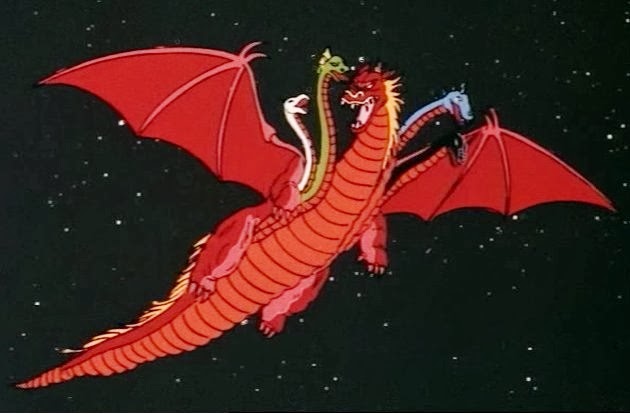 The show apparently caught a lot of flak from parents' groups during its run. It was considered extremely violent for the time and had a disclaimer that it had “been linked to real-life violent deaths”. Must have been some pretty serious games of “the floor is lava” going on to warrant such a warning about a cartoon. If I were a parent, I would have no problem letting my kid watch this show. Compared to the CRAP that is on TV today!?! Sheesh, don't get me started.
Suffice it to say, dangerous cartoon or not, Dungeons and Dragons is an excellent way to spend a Saturday morning. It isn't too “preachy” with it's morals, there's tons of dragons and weird creatures, Welker and Cullen action, and some pretty neat magical predicaments. Occasionally I will wear myself out on a cartoon having watched every episode on repeat for a month, but this isn't one of those. It is, however, the Best Cartoon Ever (of the Month).

-Kalan
Phantom Troublemaker vs. 31 Days of Halloween
I’m changing the format a bit this year in order to more accurately portray SyFy’s schedule and also to preserve my sanity. I had the genius idea to cut and paste the schedule directly from SyFy’s page rather than typing it out in my own format. This has saved me an awful lot of time and also means that individual episodes are listed rather than blocks of programming like previous years. So what I’m going to do is provide commentary where I feel it is needed rather than posting next to every single entry. Don’t worry – you’re getting the same amount of hilarious, then kind of funny, then labored, then thoroughly disenchanted Phantom content. Just in a different way.
Like last year, I am covering the programming from the time this posts until the time of the next post. That means that on Fridays you are going to be treated to a shit-ton of this stuff.
Let’s do it!
Oct 18 11:00 AM Being Human Get Outta My Dreams, Get Into My Mouth
Oct 18 12:00 PM Being Human What's Blood Got To Do With It
Oct 18 01:00 PM Being Human One Is Silver And The Other Pagan
Oct 18 02:00 PM Being Human Your Body Is A Condemned Wonderland
Oct 18 03:00 PM Being Human Of Mice And Wolfmen
Oct 18 04:00 PM Being Human For Those About To Rot
Oct 18 05:00 PM Being Human If I Only Had Raw Brain
Oct 18 06:00 PM Being Human Always A Bridesmaid, Never Alive
Oct 18 07:00 PM Being Human Ruh Roh
Oct 18 08:00 PM WWE Smackdown
Rather than comment again on how I’m not watching wrestling anymore, I’ll give you this video from my favorite series of Pay-Per-Views, WCW Halloween Havoc:
Oct 18 10:00 PM Haven Countdown
Rather than comment again on how I’ve never watched Haven, I’ll give you this:
Oct 18 11:00 PM Being Human Get Outta My Dreams, Get Into My Mouth
Oct 19 12:00 AM Haven Countdown
Oct 19 01:00 AM 31 Days Of Halloween Movie Daybreakers
Oct 19 03:00 AM 31 Days Of Halloween Movie Dracula 2000
Oct 19 05:00 AM Deals From The Darkside Beheading Axe
Oct 19 05:30 AM Deals From The Darkside Pear Of Anguish
You are not going to believe what a Pear of Anguish actually is. I thought this title had to be a typo, so I looked up “Pear of Anguish”. Holy crap. If you ever needed proof that humans are totally awful and probably should have been wiped out a long time ago; here you go:

From Urban Dictionary:
"AKA. Oral, Rectal, and Vaginal Pear.

A torture device shaped like a pear; had four segments which opened and closed at the turn of a screw at the top, like a flower opening its petals.

This torture gadget was inserted into the mouths or heretics, blasphemers, disturbers of the peace...

Or into the rectums of people convicted of sodomy. Homosexual men were especially vulnerable to this...

Or into the vaginas of women convicted of adultery or "sexual realtionships with Satan".

Often, the ends of the pear's segments were fitted with sharp tines, designed to rip into the throat, intestines, or cervix.

What ever cavity that the pear entered would face a range of things, from a slight expansion of the pear's segments and discomfort for the victim, up to total expansion and unrepairable (and very painful) mutilation of the cavity."

Email ThisBlogThis!Share to TwitterShare to FacebookShare to Pinterest
Labels: 31 Days of Halloween, Best Cartoon Ever (of the Month), cartoons, Dungeons & Dragons, Kalan