Jason Flowers was the first artist we ever approached about doing a Phantom Troublemaker sketch. Mrs. Troublemaker knew him from her work in the comic shop and I knew of him because I had seen his booth at several cons and his subject matter was always awesome. Killer Clowns from Outer Space, Pumpkinhead, Gremlins, Ninja Turtles, Gillman – all kinds of monster and cult awesomeness. And Flowers’ style was so specific and eye-catching that his work always jumped out of the booth and drew me in.
I’ve bought a number of prints from the guy over the years. He’s one of those local artists – like Chris Hamer – that irritates me by having stuff I can’t resist when I’m trying to save my money for out-of-towners that I don’t get to see as often.

The first time I got to see Flowers’ work in sequential form was in his collaboration with pulp sensation Bobby Nash – Bloody Olde Englund. It’s an awesome werewolf tale that I keep meaning to review but stuck in one of those comic book frames after I had everybody sign it and just haven’t taken out again. Now Jason is working with Michael R. Carr on a new comic called Quiver. I talked to Michael last week; now it’s Jason’s turn.

1) What are your top geek passions?

A) Comics. Art. Horror. Movies. Not in any particular order...

A) Gosh, it varied. For a long time it was He-Man, but then once Teenage Mutant Ninja Turtles came along, it was over. They became my obsession~

A) That’s a good question. It depends. My choices of music always reflected pivotal points in my life. So it’s hard to just choose one specific album~

4) Who is your favorite wrestler and why?

A) I missed that band wagon. I remember when wrestling was really big in the early 90's with the cartoons and figures. I never really got into them, but my two favs were always Hulk Hogan and Sgt. Slaughter. Especially when Slaughter was in the G.I.JOE movie. That was some awesomeness~

A) Stubborn, self-taught artist that never takes no for an answer. I always wanted to go to art school, but never had that back support from family pushing for it. So it never happened. I learned everything I know through just doing it myself. I never inked until my friends said they didnt want to ink my art, so I did it. I never colored because I never really knew how to do it and since colorists online wanted outrageous money for coloring a single image, I decided to pick up the mouse and learn how to do it myself.

6) What can you tell us about your new project, Quiver?

A) Quiver is the brain child of Michael R. Carr. It tells the story of the devil and... well, just check out the site for all the details :)

7) How did you hook up with Michael R. Carr?

A) I never really got to go trick or treating as a kid. And as I got older my parents still never would let me go because they felt I was too old. I did go trick or treating with a high school buddy our senior year which turned out to be a lot of fun, but that’s about it~

A) Tom Hanks. The guy is a great actor. I love his earlier stuff where he was silly and fun and I also dig his newer stuff where he's more serious. He just seems like an all around nice guy and the type you could just stop and have a great conversation with~

10) What advice can you give to somebody looking to self-publish a comic?

A) Do your research. Know your product. Know your audience. Never expect the product to sell itself. You have to promote, promote, PROMOTE!

11) If you could pursue any project, what would it be?

A) Teenage Mutant Ninja Turtles. I'm a HUGE fan. Anyone that knows me can tell you how much they mean to me...

A) Big Trouble in Little China. The movie is flawless and should NEVER, EVER be considered for remaking... 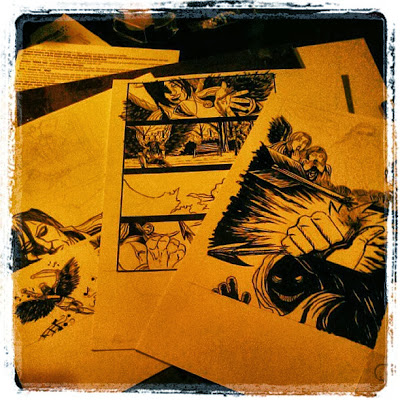 13) Closer – can you give the big pitch for your projects and where we can find them?

A) Quiver can be found at www.czkworld.blogspot.com. I currently just finished up sketch cards for the new panoramic STAR WARS set and sketch cards for the new MARS ATTACKS set both coming out later this year from TOPPS CARDS. My prints can be seen and purchased over at my online store: www.jasonflowersart.bigcartel.com I'm working on a few comics of my own and finishing up my werewolf graphic novel: BLOODY OLDE ENGLUND with comic/pulp writer: Bobby Nash. For more info on that visit www.bloodyoldeenglund.com

Thanks again for the interview~

Phantom Troublemaker vs. 31 Days of Halloween
I’m changing the format a bit this year in order to more accurately portray SyFy’s schedule and also to preserve my sanity. I had the genius idea to cut and paste the schedule directly from SyFy’s page rather than typing it out in my own format. This has saved me an awful lot of time and also means that individual episodes are listed rather than blocks of programming like previous years. So what I’m going to do is provide commentary where I feel it is needed rather than posting next to every single entry. Don’t worry – you’re getting the same amount of hilarious, then kind of funny, then labored, then thoroughly disenchanted Phantom content. Just in a different way.
Like last year, I am covering the programming from the time this posts until the time of the next post. That means that on Fridays you are going to be treated to a shit-ton of this stuff.
Let’s do it!
Okay, this is a whole day of Ghost-whatever shows. When I saw that it pretty much killed my enthusiasm for doing this. So instead of trying to think of clever things to say about a dumb but admittedly seasonally appropriate – show, I am going to write a haiku for each episode. Enjoy.
Oct 16 11:00 AM Ghost Hunters, Season 9 Prescription For Fear
Here’s your prescription
It’s not for penicillin
It’s for fear, fucker
Oct 16 12:00 PM Ghost Hunters, Season 9 Permanent Residents
Not temporary
It looks like these residents
Are here for good, man
Oct 16 01:00 PM Ghost Mine, Season 2 Return To Darkness
You came from darkness
We don’t want you in the light
Get out of here ghost
Oct 16 02:00 PM Ghost Mine, Season 2 The Lost Chamber
It was just right here
I swear I left it right here
The chamber is lost
Oct 16 03:00 PM Ghost Mine, Season 2 Phantom Intruder
Phantom Intruder
Sounds a little bit like me
Except more rapey
Oct 16 04:00 PM Ghost Mine, Season 2 Wandering Spirits
Wandering spirits
Not all who wander are lost
Get lost dumb spirirts
Oct 16 05:00 PM Ghost Mine, Season 2 Ghosts Of The Geiser Grand
Incorrect spelling
I think they spelled geyser wrong
Maybe it’s a name
Oct 16 06:00 PM Ghost Mine, Season 2 Mystery Train
Go Mystery Train!
Solve that crazy mystery
There are no ghosts though
Oct 16 07:00 PM Ghost Hunters, Season 9 Something In The Water
It’s just a Snickers
Or maybe just an old boot
Could be Sharktopus
Oct 16 08:00 PM Ghost Hunters, Season 9 Undying Love
True love doesn’t die
It turns into scary ghosts
That fart in the walls
Oct 16 09:00 PM Ghost Hunters, Season 9 The Coroner's Case
Coroners are smart
But maybe this one is not
To want Ghost Hunters
Oct 16 10:00 PM Ghost Mine, Season 2 Massacre At Hells Canyon
A new episode
Exciting for October
Bet they don’t find ghosts
Oct 16 11:00 PM Ghost Hunters, Season 9 The Coroner's Case
Oct 17 12:00 AM Ghost Mine, Season 2 Massacre At Hells Canyon
Oct 17 01:00 AM Syfy Original Movie Children Of The Corn
Is this a remake
Or could it be a reboot
Enough already
Oct 17 03:00 AM 31 Days Of Halloween Movie Seconds Apart
This sounds like a film
That would star Sandra Bullock
And Keanu Reeves
Oct 17 05:00 AM Paid Programming
Oct 17 06:00 AM Paid Programming
Oct 17 08:00 AM The Twilight Zone The Masks
Oct 17 08:30 AM The Twilight Zone I Am The Night - Color Me Black
Alright, Twilight Zone is just good stuff. Once again, I wish they’d save it for New Year’s; but it doesn’t deserve the haiku treatment.
Oct 17 09:00 AM 31 Days Of Halloween Movie The Hive
I remember seeing this movie about killer ants when I was a kid. There was this one scene where some kid was crawling around in a dumpster and then he came screaming out of it, covered in ants. My skin is crawling right now just thinking about it. He ran through a parking lot and dove into a pool. I don’t remember much else about the movie, but that scene really did a number on me.
There was this other movie – I think it was called The Swarm – about killer bees. It was pretty scary, too. I think they were both on Commander USA’s Groovy Movies.
I bet The Hive isn’t as good as either of those.
-Phantom