Like pretty much everybody that has seen Breaking Bad, I absolutely love it.


Every episode except for one has been excellent. Not just good, not just entertaining – excellent. Well-paced, integral to the overall narrative, and enthralling. I can’t think of another show with that kind of track record – especially one with as many episodes under its belt. Firefly is as near to perfect as I’ve seen and it was only thirteen episodes and a movie.

While I have no plans to buy every bit of Breaking Bad merchandise I can get my hands on, I did want to own a Walter White figure. Brian Cranston has been too amazing in this role for me to not own a tiny, plastic tribute to his greatness. MEZCO produced this figure depicting Walt in his Heisenberg gear, as well as a HAZMAT suit version. This, to me, was the more iconic look. The other one is Walt at work, this one is Walt handling business.


I was a little wary of the fact that MEZCO was producing these. Those guys don’t have the best track record for producing accurate likenesses or for dealing well with proportion. The last thing I wanted was a goofy-looking Walter White. 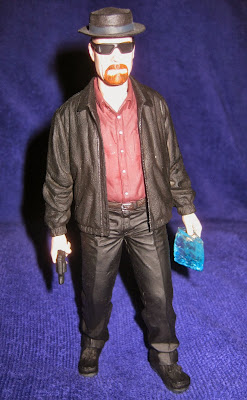 First Glance: He looks kind of stumpy and you can’t see the face very well through the protective plastic. I was definitely concerned because this looked like an obvious attempt to conceal a crappy face sculpt. Thankfully that was not the case. 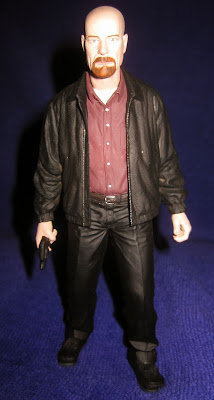 
I dislike unarticulated figures to start with, but it’s really a problem when they don’t stand up. Part of the reason to put joints on figures is to allow for the inevitable warping of plastic during the production, packaging, and shipping process. When you make a figure that is just a big chunk of plastic, this warping is going to affect the design and balance the figure was engineered to have.


With a little work this figure can be made to stand up. Until you put that duffle bag in its hand. Getting it to actually hold the bag is hard enough, but once you manage that feat your little Heisenberg is going to topple over. If anything on this figure was poseable, adjustments could be made to compensate for the weight of the bag. 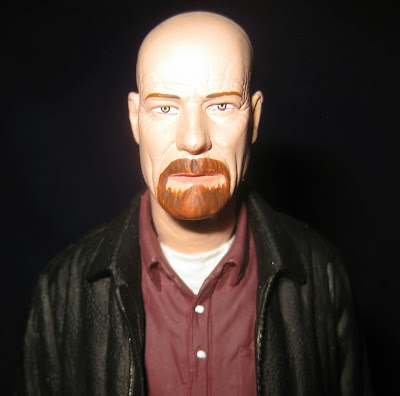 Sculpt: What this figure lacks in articulation, it… well, it doesn’t make up for it with sculpt; but it does look very good.


The head sculpt is definitely on the higher end of what MEZCO has produced. It is very slightly caricature-ish, but looks solid and is unmistakably Brian Cranston. The proportions are just a tad broad and squat like the rest of the figure, but it works. Especially with the hat and sunglasses on. I definitely appreciate that the facial hair is sculpted rather than just painted. That alone puts this figure’s sculpt a notch above plenty of other 6” scale figures in my collection.


The clothing is very well done. It has a certain weight to it and the folds and wrinkles look good. The jacket has a texture to suggest leather while the trousers and shirt are pretty much flat. The buttons and stitching on the shirt are precise and well done. The belt looks great, and I’m not one who often goes on about belts that aren’t championships of some sort. But this is a very nice looking belt.


The jacket has bunched-up elastic around the waist and sleeves and the zipper is particularly well done. It’s actually offset on the right side for the little flap underneath. I know I’m getting a little detailed here, but some of this stuff really is impressing me.


The shoes are Walt’s recognizable moccasin-style and also feature nice details – soles, laces, and the seam on the toes. 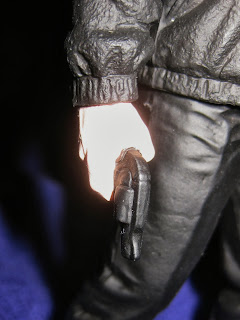 What I’m not crazy about is the gun sculpted into Walt’s right hand. It doesn’t look bad, but I like permanently attached accessories even less than I like unarticulated figures. Heisenberg holding a gun does not, to me, represent what Heisenberg is all about. Motherfucker doesn’t need a gun. It doesn’t make this figure seem more badass; it makes it seem less special. Walt’s other hand, on the other hand, is just another hand. It’s sculpted open and meant to be able to hold the included duffle bag or baggie of meth. I say “meant to” because it takes a lot of time and effort to make either of those things happen. And once you get the duffle bag in the right spot, the figure falls over. 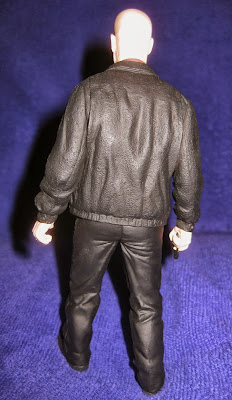 Coloring: The paint on the head compliments the slightly unrealistic look of the sculpt. I don’t mean any of that as bad. It looks quite good, and much better in person than these photographs suggest. The applications are precise and centered.


The paint is definitely a standout feature on this guy. While it isn’t overly detailed as far as washes and weathering, the colors are so solid and the small details are so well done that the figure looks excellent. The jacket, trousers, shirt, shoes, and undershirt all have thick applications with no bleeding or thin spots. The shirt buttons, belt, and jacket zipper – of all things – are what actually give this figure a bit of a wow factor. They’re all bright and shiny and right in the center of the figure’s profile, so they stand out and look interesting. They’re also quite well done for such tiny parts. 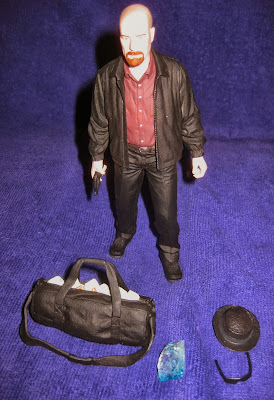 Accessories: Walt comes with his Heisenberg hat and sunglasses, a baggie of crystal meth, and a duffle bag full of cash.


I was shocked to find out that the hat and sunglasses were removable. I had no idea and you really can’t even tell until you start pulling on them. They’re fitted to the figure amazingly well and what’s more they stay in place even after you’ve removed them and put them back a few times. I have to say that these are two of the most finely-crafted accessories I own. The hat is painted well and has a nice texture to it. The glasses could have used some gloss on the lenses, but otherwise look great.


The meth baggie is translucent and has some blue blended into it. It looks like what it is supposed to be. There is a notch in the top so that it fits into the figures’ hand, but that doesn’t work as well as I would like. It doesn’t fasten or click into place – it just sort of hangs there. Precariously.


The duffle bag works a little better since it actually has a handle for the figure to hold onto, but unfortunately it is so heavy it pulls Mr. White right to the ground as soon as you let go. It does look great, though. The bills sticking out are very detailed and the sculpt of the bag and straps is great. A little detail paint might have been nice, but this is still a good-looking accessory. I wish the shoulder strap was more functional. I’d love to give this thing to Deadpool. 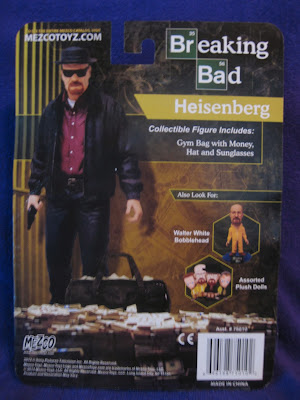 Packaging: Hooray for blister cards! For some reason the stats on the back fail to mention Walt’s little blue baggie. 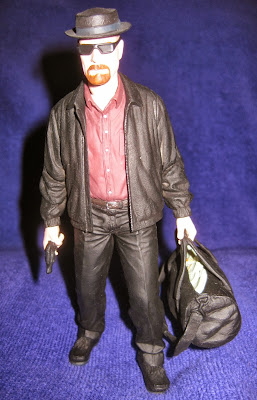 Value: I hate to tell you guys this because this is kind of an important portion of the review, but I’m not entirely sure what I paid for ol’ Heisenberg. I got him at the comic shop along with a couple of weeks’ worth of books, a long-awaited Klingon Bird of Prey, and some other stuff. I didn’t bother pricing everything out. But it looks like this figure is retailing for around $17, which is too much. It looks great, but the complete lack of articulation and lousy balance are just unacceptable when put up against comparably-priced releases from other companies like NECA and Mattel.

Overall: Heisenberg looks pretty great just standing on the shelf, but I need more than that from a figure at this price point. Lack of articulation, poor interaction with some of the accessories, and lousy balance just aren’t okay in this day and age. Especially from a veteran toy company like MEZCO.


Like so many other toy lines, this is a case where if you want Heisenberg this is likely to be your only option. Breaking Bad is over soon and I just don’t see another company picking up the license and doing a better job. The only real possibility is that Hot Toys or one of the other Japanese companies will do a sixth scale figure. I’m sure it would be nice, but unless you’re ready to shell out $250 for your favorite meth cooker this sub-par MEZCO release is your best option.


He’s available from most of the regular online retailers, but I’d recommend seeing if your local comic book shop can order you one.