Back in Black- Luke Skywalker

I bet if a poll was taken, 90% of toy collectors started with Star Wars. They aren’t hard to find, are relatively inexpensive, you learn about chase figures (damn you long lightsabers!), and there are thousands of them. My serious toy collecting started with the 1995 orange card, power of the force toys-- you know, the ones with the buff Luke. I collected the 3.75 scale pretty seriously for the next 6 years. I had hundreds of the figures and most of the vehicles. I left Stars Wars figure collecting for a few reasons. After a while, I had most of the characters and wasn’t interested in redo’s or expanded universe for the most part. I think what really killed it though was Spiderman Classics. Once I started buying figures in the six inch scale, I didn’t want to go back. Six inch Star Wars toys were always a dream, and things like The Force Unleashed toys were ok, but they were more statues. Then, last year, Star Wars Black was announced. I went back and forth on getting them. They are expensive ($20 retail), and I wasn’t sure I wanted to get into another line. Alas, reviews started being put out, and I knew I had to have them. So I put in an order at Big Bad and got the whole first wave. Let’s see if this was a good decision….


Wave one consists of Luke in X-Wing gear, R2D2, a Sandtrooper, and Darth Maul. Over the next four reviews we will go into each one, but today we start with Luke. Why Luke first? Because unlike most Star Wars fans I like the rebellion better than the empire and, even more, I like Luke. I know it’s popular to call him a whiner, but let’s see how cool you would be if you were 17, the best pilot around, and had to work on the family water farm… IN THE DESERT. That’s what I thought. 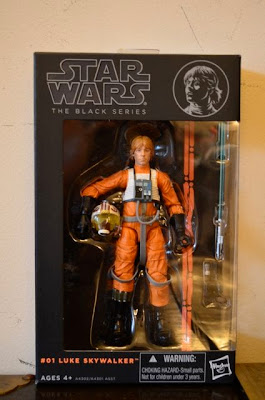 When the toys arrived I was surprised how small the box was that these four came in. Each comes in a box with little wasted space, and it makes them look HUGE. I’m a big fan of this box. Due to moving, I’m not displaying my figures right now so it’s nice to be able to reseal them in the box. Luke is displayed so that he won’t warp, and all the accessories are easy to see. For some reason these figures are numbered (Luke is #01) which, I guess, is to motivate people who may skip some figures. Luke looks great in the package, and while I haven’t seen these at retail yet, I think they are going to stand out enough to really grab your attention. 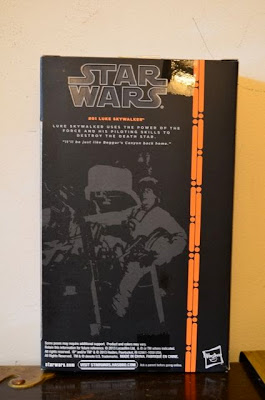 The back is done in a nice matte black with some art and has a bio and quote. 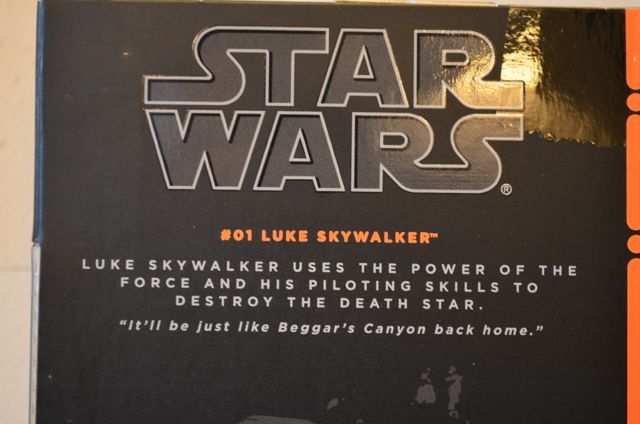 The bio is fine; they really don’t need to go into much detail as everyone knows who these characters are. I do love the quotes they have chosen for each for different reasons. Luke gets, “It’ll be just like beggars canyon back home.” Screen accurate, yes, makes any sense out of context, nope, and that makes it great. 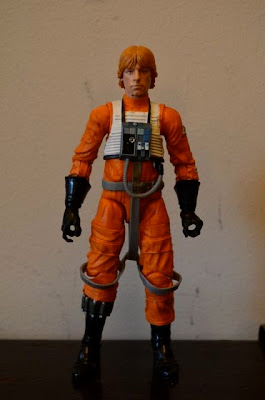 After years of Mattel’s DC toys this thing is like fine art. So many of the sculpted details could have just been done with a paint job. Hasbro obviously has used their time with Marvel Legends to figure out what does and doesn’t work on a six-inch figure (see also the new Marvel Legends female buck). Details like the silver stuff in his pockets and on his arms are all sculpted on. The wrinkles in the clothes look great and really show how much money they are sinking into tooling. There aren’t going to be a lot of shared parts in this line. The harness is a separate piece. One thing I didn’t notice until Mr. Troublemaker pointed it out was that the left leg is longer than the right. I’m not sure if it’s because of the different boot, but it’s really not a big deal, and I would have never noticed had it not been pointed out. The face sculpt looks great, but there is something “off” about it that I can’t put my finger on. 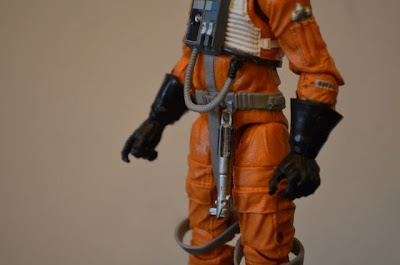 Luke also has a sculpted hook for his lightsaber. I’m a big fan of figures that have places to store accessories, but this little hook is just asking to lose your saber. So, while I appreciate the effort, Luke will have to store his saber elsewhere.

All the paint on my Luke was tight, and there were no mistakes. The helmet has a nice “beat up” paint job that looks great. 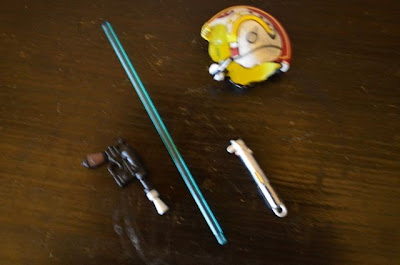 We have gotten to the point in action figure collecting where getting accessories is like hitting the lottery. Luke comes with his lightsaber with detachable blade, blaster pistol, and helmet. They all look great and, my god, have painted on details. Going with the removable blade was a great idea, and it fits in tight. The blaster looks just as it should and is made of a firm plastic. The helmet is a work of art. 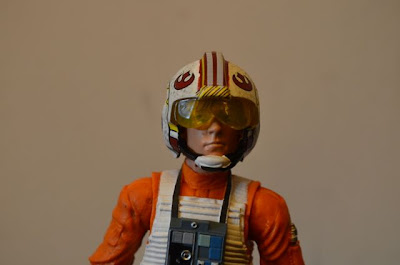 Hasbro has somehow made a helmet that doesn’t make it look like the person’s neck would break from having a giant cranium. It fits securely over his head, and the see through visor aligns perfectly with his eyes. The strap fits tight on his chin and doesn’t feel too fragile.

The only other accessory that I would have liked to see included would have been a thermal detonator to complete his ESB look, but I have a feeling we will be seeing that one a couple of times. Probably with a ROTJ Luke and/or Boushh Leia

They did a great job with cuts on this figure. None stand out, and somehow they managed to match the pins with the paint of the figure. With the way other companies behave, you would think that was as hard as getting a DC sub renewed (sorry its that time of year).

So you get:
Head-Ball and pivot
Shoulder-Ball and cut
Elbow- Pivot/swivel
Wrist-swivels/pivots
Chest
Leg- I think it’s a ball
Thigh-swivel
Knee- Double pivot!
Boot-Swivel
Ankle- HOLY SHIT WHAT IS THAT? 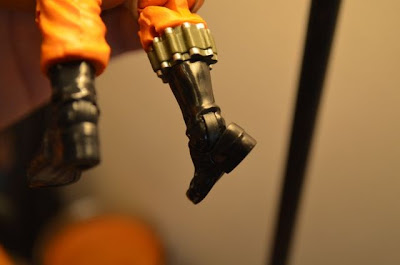 I didn’t notice the pivot in the wrist until I started this review. Mine were really tight, but the pivot is there. I went back and this cut is on the other two in this wave also which makes posing with the gun much easier.

The only articulation really missing is being able to turn at the waist. Granted, it never looks right when you twist a figure like that at the waist, but it’s surprising it’s not there.

I was able to get the figure into almost any pose I wanted (which is something we collectors always look for) and then just display them in a natural position. 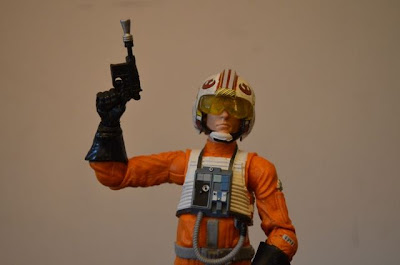 I’ve decided to get away from the normal “out of five” ranking and do something new. So I’ve broken down my decision into four categories: GET IT! (you must own this figure, go on amazon, bbts, etc., pay extra this figure is totally worth it), HUNT IT! (this toy is great, has some problems, not worth paying more than retail, but worth driving to a bunch of stores trying to find it), FIND IT! (it’s an ok figure and worth picking up if you see it, possibly on clearance), PEG IT! (leave that shit on the pegs, it can be friends with power girl and the green lantern movie toys).

After being on the fence for so long, once I had this in hand it was worth every penny. I can already see my bank account draining for this new series. The sculpt is great, he comes with great accessories, and he has little QC problems. Totally worth seeking out at BBTS or Amazon --both are still selling him at retail price right now.

Over the next few reviews, we’ll go over the next three figures in the wave, thoughts on the choices for this wave and the next few, and where I’d like to see the series go (including vehicles which would be both the best and worst thing to ever happen to my collecting).

So join me next time when we talk about the real star in Star Wars: 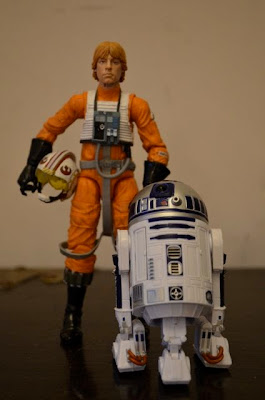