The Best Cartoon Ever (of the Month) – Robocop: The Animated Series by Kalan 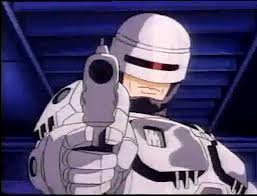 Detroit, the near future, well, probably not too far in the future considering Detroit's reputation as being a crime-ridden cesspool for generations. Gangs are running rampant, stealing blood plasma, hiding out in their lairs playing arcade games, OCP is evil and ED-260 - even though it's a new model that “is not programmed for failure” - is still a piece of crap. I'm speaking of course of the Robocop animated series – and no, I don't mean Robocop: Alpha Commando because the Best Cartoon Ever (of the Month) is a series about GOOD CARTOONS.
If I were a stickler about such things, and I suppose I very well have been in the past and surely will be again, I could pick apart the show for the things it changed from the films and get all sorts of rambunctious about how they could have made the cartoon better or whatever it is some other pop culture reviewers do. That's just awfully negative though, I'm just not into that sort of thing this time around. What really makes this show the Best Cartoon Ever (of the Month) are all the small things that are in the animated series that carry over from the movies that you don't pick up on having just seen the first film once, or even all of them several times. I will admit that even though I never need a reason to watch the Robocop trilogy, I felt it my duty to refresh my brain and re-watch those VHS tapes for the bazillionth time just so you, the reader would have a more fulfilled review-reading experience. (You're welcome.)


Robocop wasn't exactly the most kid-friendly trilogy to begin with, but it has been “dumbed down” for this 1988 Marvel Production series without losing a lot of what makes the movies so enjoyable. Like several of the other shows I plan to feature in this series, there are very few episodes so there isn't much opportunity to “develop” any in-depth stories. The show doesn’t require having seen the films, but to really enjoy it and appreciate it the way it deserves, I highly suggest at least watching the first one since it is primarily what the show goes off of. The intro gives the kiddos a little insight into how Murphy makes his transmogrification into Robocop, which actually portrays a dude that looks like Kurtwood Smith doing the dirty work, major props there. It's a little intense compared to other Saturday morning cartoon intros, but it wouldn't be Robocop if it wasn't violent. While the movies were rather laden with gunfire, the cartoon doesn't let it's infantile audience hold it back in that department, they just did what most shows in the late 1980s did, and converted to laser guns. It probably goes without saying, but I'm not the kind of person who ever has a problem with laser guns; nor does it affect my ability to suspend whatever lingering disbelief I may have (okay, well most of the time).

Robocop and Anne Lewis – Like, Totally BFF
Animated series Anne Lewis is quite a bit different than film Anne Lewis, but they're both good lookin' ladies, so who cares. Animated series Lewis has the occasional hots for Robocop - they even go out on a date - and while I can't blame her, it's definitely out of character per the movies. Robocop's wife and son are only mentioned once, in the episode where Clarence Boddicker makes his return (but Kalan, Clarence Boddicker dies in the movie. Yeah, I know, it's a cartoon, deal with it; he's back), the series focuses mostly on thwarting the evil-doers and reclaiming shreds of humanity than rehashing some back story that most kids watching the show are not familiar with.
One of the things that I was incredibly happy to see carry over from the movies were the quirky commercials and TV programs broadcast within the show. My favorite is a newscaster's punchline, “and he said, that wasn't my wife, that was a hedgehog!”
This series has a lot of word play and puns, which is a big contribution to how awesome it is. In the first episode Sergeant Reed has a serious obsession with football quips. Luckily that doesn't last the other 12 episodes, because it is insanely annoying. I mean, if it had been a good sport, like baseball, I would have found it much more tolerable, but like I said, it only lasts the first episode.
The bad guys in this show are not quite as evil as the ones from the movies, but they're pretty sincere in their villainous intentions. The Vandals are the main gang and are rather inept until a little nudge from OCP higher-up and ED-260 developer Dr. McNamara. Thanks to him, they're substantially technologically outfitted to wreak havoc.
I'm one of the first to admit that I have a rather annoying tendency to pick out ridiculously trivial parts of things that I watch, things that really have nothing to do with anything else going on in the show/film. The one instance of this that comes into play this month with the Robocop animated series is the fact that one of the Vandals, Crash, has the same annoying high-pitched laugh that Joe P. Cox (Jesse Goins) had in the first film.
The backgrounds in the show are absolutely phenomenal. I wish every cartoon paid the same attention to detail that this series did to what could arguably be an insignificant aspect. The city is rugged, it's dirty. The buildings, especially the OCP headquarters, are looming. In the street scenes the names of the shops are funny. If you're looking close enough, the Vandals take on Robocop in front of a store called “Whang's Co.” and that just makes me chuckle. The only time I know that Delta City is mentioned is in the “Project Deathspore” episode (my favorite one for so many reasons), but there are billboards advertising it throughout the rest of the series.
Robocop encounters some very adult themes in this series, especially compared to “cartoons” these days. One episode in particular pits the super cop against a Ku Klux Klan style gang, and when I say “style” I mean it's pretty damn obvious what it is they're trying to convey and what direction the episode is going to go. This episode, “The Brotherhood” is my second favorite of the series because of its absurdity. I remember watching the series all the way through the first time and when the 4th episode came on I was slack-jawed and shortly thereafter in the throes of hysterical laughter. The “flesh-brothers” (because that's not a weird way to refer to one another) are beyond perturbed that machines have made life so much easier for people in Detroit - “they terk our jobs”, if you catch my South Park drift. The Brotherhood has this great idea to use an electronic device that emits a frequency that destroys electronics. What better way to get back at Robocop and other machines than to, you know, create a very high tech machine, right?
A few of the episodes are really difficult to accept as part of the Robocop brand – like the one where he goes camping or the Robin Hood one. There are times while watching this show when I think to myself “okay, who was on vacation and let the intern give the green light?” Like I said at the beginning though, I don't want to be “internet-gative” (hahahahaha, okay, now that was a good 'un and you can't deny it). To be fair though, in the second movie when the advisory board is meeting to discuss Robocop's new directives one of them mentions that he never does anything for environmental awareness, so I guess that's where “The Wilderness” comes to fruition and another mentions that Robo doesn't really make an effort to be a “positive” influence for Detroit's youth, I assume “The Archer” is an effort to address that because apparently ridding the city of it's more nefarious citizens isn't positive when you use a big gun and explode buildings, go figure.
If you're looking for a solid way to spend a Saturday morning, or any morning in my case, look up the Robocop series. While it is important to disconnect slightly from the films in order to fall in love with this show, it is not impossible. It's fantastically animated, written fairly well, and most importantly, it's a Marvel Production and it's ROBOCOP. Best cartoon EVER (of the month).

Email ThisBlogThis!Share to TwitterShare to FacebookShare to Pinterest
Labels: Best Cartoon Ever (of the Month), cartoons, Kalan, RoboCop