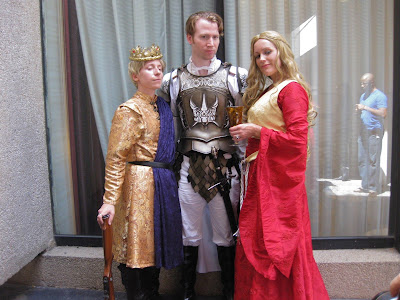 I learn something new at every convention that I attend, but to be honest none of those conventions - and really, nothing at all - could have prepared me for Dragon Con. I tried to ask a close friend about it before I went for the first time last year, but he kept telling me that I "just had to see for myself". And I kept saying, "Not cool, man. You must have some suggestions or information!"
Needless to say, that got me nowhere - with him, anyway. And silly little me didn't even think to look for Dragon Con groups on Facebook or to check and see if there was a Dragon Con subreddit (hint: there is). All I had was their website (which is not exactly laid out well - I swear it's meant to be confusing - yes, I mean on purpose), the progress report they mailed to me barely a month before the con, and the app on my iPhone.

And none of those could tell or teach me any of the following lessons. Only actually going and being there can give you the slightest idea of what it will be like - and I'm already getting the feeling that this year's Dragon Con will be very different from last year's - and that next year, and the year after that, and on and on, will continue to change and evolve. Still, some things that you should bring, or know, or do will probably remain the same...and so I bring you "Lessons from My First Dragon Con"!


1) It's okay - in fact, it's probably necessary - to take a break every once in a while. This could mean skipping a panel that you wanted to go to, or going to bed before 2 AM one night, or even (::gasp::) abstaining from alcohol for one of the days. I know, I know, it's Dragon Con! Suck it up, they say, because it's only once a year! But to be completely honest, last year I had to do all three of the above. It hit 5:15 PM on Friday evening, I realized I hadn't eaten since breakfast (unless a frappuccino from Starbucks counts), and I knew that I had a choice - skip the 5:30 panel I wanted to go to, sit down, relax for a while, and have a decent meal...or end up even more tired and hungry than I probably was. You know what tired and hungry leads to? (At least for me...) Grumpiness. And who wants to be grumpy at Dragon Con?

2) Give yourself "windows". Of time, that is. If you think it will take you 10 minutes to walk somewhere, add at least a 5 minute window to that time frame. (Ten or fifteen minutes - maybe more - on Saturday of con!) If you need to do a costume change (into one, out of one, between two), add a 10 minute window to both the beginning of your costume change time, and to the end. Because if you don't, something will inevitably go wrong - because you must know that's how these things always tend to work - and you'll end up being late or missing something.

3) Bring blister pads - or moleskin, or something similar! Trust me on this. No matter how comfortable or broken in you think your shoes are - you will be walking a lot. You or someone you know will inevitably end up with blisters, and at least last year blister pads and the like were impossible to find as early as Saturday afternoon. Trust me...I looked. 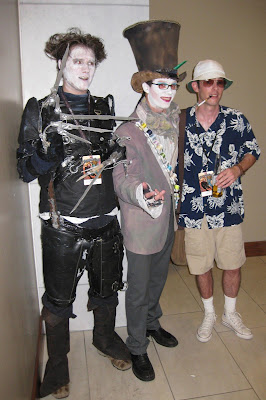 4) Have a plan for what you want to do while you're at Dragon Con - and then have a backup plan. And then realize that sometimes you won't end up making it to/getting to do your option A or your option B, and that there's no use being upset over that - because there is always something else going on that will at least partly (and sometimes even completely) make up for whatever you missed. Case and point: last year I was supposed to go to the American Sci Fi Fantasy Media track's "Gameshow of Thrones" on Sunday night. One thing led to another and by the time I was able to get to their track room, it was packed full and they couldn't allow any more people in. There was a couple there who was in the same boat, and we ended up commiserating over just missing the "Gameshow". The commiserating progressed into having some beers together, and I found out that they lived just an hour and a half from me. I may have missed the Gameshow, but I met some cool people, had some drinks, and spent the next hour and a half talking about Song of Ice & Fire, anyway. I'm still torn over whether that was the next best thing, or better than actually sitting through the Gameshow.

5) The Marriott - especially the Atrium level - is the place to see and be seen. I may have been the only first time Dragon Con attendee to not know this, but I figured I would throw it on this list just in case. I attended several writer's workshops on Friday of Dragon Con last year and so stuck around the Hyatt almost all day...and by the time I wandered over to the Marriott I was aghast at everything I'd been missing! I wouldn't want anyone else to make the same mistake :)

6) Despite the heat outside, sometimes it's actually not best to use the habitrails (or skybridges, whatever you want to call them). Especially on Saturday of con. Just...trust me on this.

7) Dragon Con will spoil you, especially for other multi-genre cons. Seems such a simple thing, I know, but when it's all over and you start planning your next convention trip...well, just be certain to keep this in mind.


There really are a million more lessons that I learned, but to be honest most of them (and surely some of these) can be found in the many first-timer Dragon Con guides scattered all over the internet. Most importantly, though, the thing to remember about Dragon Con is that if something doesn't go or happen or work the way you want it to - embrace it, make the best of it, and goshdarnit, just have fun! 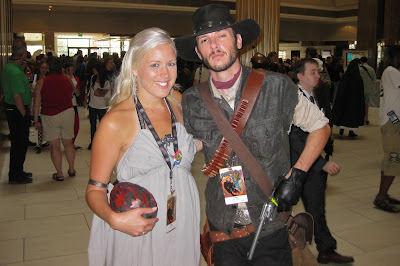