AAAAAAHHHHHHHHH!
Dragon*Con starts TONIGHT, motherscratchers!
That’s exactly how I began this post last year. The major difference is that I am not going to be staying down there this year. Staying on Thursday night threw off my whole weekend last year and I do not care to repeat that. I had an absolutely great time on Thursday night, and that was the whole problem.
I need Friday during the day to visit the Dealer Room and the Walk of Fame. I need sober time to scope out the con and see what’s going on. To acclimatize myself with everything during daylight hours so I can maximize my efficiency for the rest of the weekend – all of which will be spent at some level of inebriation. I didn’t get that last year. I drank myself stupid on Thursday night and woke up late on Friday with something that I have very rarely experienced at Dragon Con – a hangover. And then had to go and speak on the very first Dragon Con panel I had ever been invited to speak on. Luckily for me I can’t help but be entertaining and engaging, so even feeling like complete shit-turds I had a great time and did well. This is why I am on more panels and RUNNING TWO PANELS this year. But I’ll get to that.

Now, I understand that I could simply exert a little self-control tonight and not have the same problem, but another factor in my decision is that I don’t want to spend another two hundred bucks on lodging. I get my own room – occasionally joined by Mrs. Troublemaker, who does not pitch in – and it costs a shit-ton. I just can’t do the roommate thing.
Having said all of that, I will be at Con today. I have to pick up my Media Badge and my regular badge. I have both because I had no idea that I’d be eligible for a Media Badge. I probably could have gotten one based on my own credentials, but I did put down the ESO Network as my organization. Just to be sure. I put exactly one interview request in and I hope I did not get it. Josh Gates is not doing interviews. This will not dissuade me from asking Josh Gates if he will do an interview. I will not interview him in the Walk of Fame, of course, because that is not allowed. 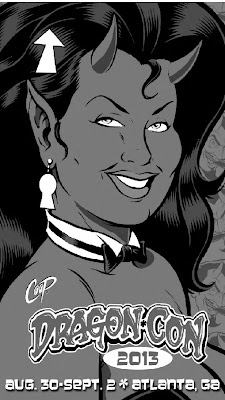 Before I get to the schedule, I’d like to point out some of the more interesting points from the opening pages of the Pocket Program.
First of all, the dealers and exhibitors have been moved to the America’s Mart, which is next to the Westin, making it closer to the central portion of Con than either the Westin or the Sheraton. Many people seem to think that this is a bad move. They think moving the dealers away from the Marriott – the central hotel of Dragon Con – will lose them money because people won’t want to walk all the way to a different building. I say this is silly poo-poo nonsense because if people are willing to walk to the Westin for a fan panel about the different hairstyles of the Whedonverse or to the Sheraton for a workshop on how to make Klingon undergarments, then they certainly aren’t going to have a problem walking across the street from the Hyatt to shop for their various nerdy needs.
I remember the last time the dealers were in the America’s Mart and I found it hugely preferable to the basement of the Marriott. Nothing against the basement of the Marriott, but that place was dark and stanky. I have always found it unpleasant and cramped and there was always this weird sense of rushed urgency that couldn’t have been healthy for sales. I never wanted to stop and look at anything because I felt like either the roof or the crowd was going to cave in on me.
America’s Mart, on the other hand, has plenty of space and – and I cannot emphasize the importance of this enough – WINDOWS.
WINDOWS
How can one feel a sense of doom with windows everywhere? I mean, unless there’s a Sharknado outside or something.
Anyway, I am all for this change.
Speaking of cramped, the Hilton Ballroom where they keep the celebrities has felt that way for a couple of years now. But fear not – in 2013 the Walk of Fame will be located in the beautiful Marriott Marquis Ballroom, which just happens to be adjacent to rooms M303-304, which is where many of the panels I will be running and participating in will be held! So on your way back from visiting Xena and the Doctors you can stop in and see me doing what I do best – providing the ol’ razzle dazzle!
Badge/hotel key checks are back and promise to be even more thorough this year. Good. I pay a lot of money to go to Dragon Con and I don’t think that just any ragamuffin off the street should be able to waltz in and enjoy the dorkery.
Download the app. It is invaluable and will save you the trouble of carrying around a 128 page booklet. The app is updated pretty much constantly all weekend, so the personalized event schedule you create (and can share with your friends) is pretty much always up to date. You can check all Dragon Con-related Twitter updates, as well. This was actually quite helpful last year, as Twitter often pointed out changes to events and programs before anything else could.

It’s ironic that the one time of year I might actually be in a loving and charitable enough mood to actually give blood is the one time of year that nobody in their right mind would want my blood.
Side Note: I posted this sentiment on Facebook shortly after I wrote it because I thought it was funny and several people took the time to point out ways that I could give blood before I started drinking. The above was just for humor’s sake. Nobody is sticking anything into my body at Dragon Con. Unless Alexandra Breckenridge shows up wearing a strap-on (kidding [maybe]).
And now it’s schedule time. This is a list of all of the panels and events I would like to attend (or am on, which will be noted in green). Chances are I’ll end up making about two of them. I’m not going to bother including panels that conflict with ones I am on, but I will note the ones directly before and after; despite the fact that I won’t be able to make those, either. And I will still list events that conflict with one another if I am not directly involved. I still haven’t made up my mind about those and probably won’t until it’s time to get in line.
First, I will be showing up at my ESO Network co-worker Michael A(is for Awesome) Gordon’s Tiki-tastic table from time to time to say hello and attempt to move some Needless Things merchandise. Please drop by and check out his awesome Tiki Zombie comics. I might just be there shoving t-shirts and stickers in your face.

Thursday
I may not have a room for Thursday night, but I do have a couple of parties to attend. The first is a private party with friends; the other is the American Sci-Fi Classics Track party. I’m excited to see all of these folks in person again and can’t wait to work with them. They are one of the best groups of people I’ve had the pleasure of talking with.
Friday
Saturday
Sunday
Monday

That’s it Phantomaniacs. As I sit here writing this, I am so excited that I can barely focus on writing this, even though it is about Dragon Con. There is so much amazing stuff going on this weekend. It’s really ridiculous. If you want the full schedule, download the Official Dragon Con 2013 app or the schedule, which is available on the Dragon Con site.
Keep an eye out for me and please do say hello if you see me. If I’m not rushing off to a panel or a Needless Things photoshoot involving #nopants and #sideboob I’ll definitely hang. Probably over a beer. Or two.
I won’t be doing any Dragon Con coverage here until next Wednesday, but you can follow me on Facebook, Twitter, and Instagram (Phantom Troublemaker) for constant on-site updates. Evil will be filling in with the remaining two Star Wars Black figure reviews on Monday and Tuesday, so please check those out.
Also, if you’re here checking out Dragon Con stuff and haven’t visited Needless Things before thanks for coming by. Me and my writers post five times a week (mostly) and it’s all original content that you can’t get anywhere else. I do the Needless Things Podcast about once a month when there’s something special to talk about. And definitely come back in October for my 31 Days of Halloween! It lasts all month long and everything on the site is thoroughly Halloweeny! Each weekday post also includes a rundown of SyFy’s programming.
Oh, and in Toy News – I don’t think I like Stonedarr and Rokkon all that much. I don’t know. I might talk Mr. Beau Brown into reviewing them after he recovers from directing the Puppetry Track at Dragon Con. You know – around December.