I thought it best to start my DCW Q&As with one of the most constant and terrifying faces at Dragon Con Wrestling.
If you’ve read my recaps, you might know him as Bob Zombie, but this creature of the night‘s true name is Dagon of the Dead. When he’s not busy organizing ritual sacrifices in Innsmouth or eating people’s faces, Dagon likes to creep into the squared circle and perform sinister chiropractic rites on his unwitting opponents.
Out of all the uncontrollable madmen that compete at Dragon Con Wrestling, Dagon of the Dead is one of the most recognizable with his sallow, bloodless complexion and haunting grimace. I was initially nervous about contacting an individual so shrouded in occult mystery and Lovecraftian lore, but I will do absolutely anything to entertain you, the Phantomaniacs. Particularly at Dragon Con time. 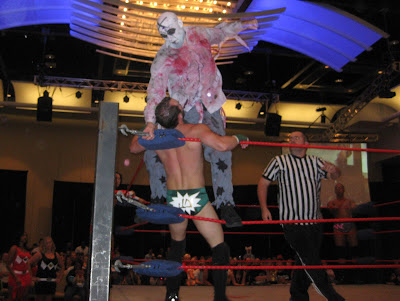 1) What was your very first match as a pro wrestler?
A) October 23rd, 1998. I was in a tag match, teamed with one of the trainers against another student/trainer team in Jacksonville, Florida.
2) What was your favorite toy when you were a kid?
A) Has to be a split between Star Wars and G.I.Joe figures.
3) What is one album everybody should own?
A) Clutch - Blast Tyrant
4) How did you become involved with DCW?
A) I used to wrestle in NWA Wildside, what is now NWA Anarchy in Cornelia, Georgia. But friendships I made back then opened up the opportunity for me.
5) Can you tell me about your first DCW experience?
A) 2005. Was a 3 Way between myself, Robbie Chance, and Vordell Walker.
6) What is your DCW dream match?
A) Dagon of the Dead VS Damien
7) What is your favorite piece of gear you’ve ever owned?
A) Probably a fur cost I used to wear out as a ring jacket. It looks more like a gorilla, and I still pull it out from time to time.
8) How does a DCW match differ from other matches? Or does it?
A) DCW crowds MAKE the shows SO much fun to work. There are other areas and shows with similar crowds as far as their DEMAND for good wrestling and ZERO nonsense. BUT what DCW has that NO PLACE else has is 100's of costumed maniacs, cosplay chicks, sci-fi freaks, fantasy, D&D, gamers, anime people, AND THEY ALL LOVE DCW!
9) Which actor do you feel like you could sit and watch for hours no matter what they were doing and why?
A) Sam Rockwell. Just watch MOON.
10) What inspires you to do what you do?
A) I LOVE wrestling, BUT it's a square peg kinda world. But I KNOW there's a large audience out there for unorthodox gimmicks. There are plenty of shows around that run outside the box shows and they do draw. Just look at how DCW grows EVERY year! That's the kinda stuff that inspires me.
11) What is your big nerd passion?
A) I am a film nerd. I even have a Facebook page, Briggs & Howell Film Critiques. Cheap plug, I know, but I do see movies at the theater weekly!
12) Is there a movie that should never be remade and if so which one?
A) Empire Strikes Back
13) Closer – can you cut a promo for the DCW crowd?
A) Sure, But as Dagon of the Dead it's less talk and MORE BITE!!!
For those of you that will be attending Dragon Con Wrestling in the Hyatt Centennial Ballrooms I-III on Friday, August 30th at 7 PM – you had best leave the front row to experienced veterans like the DCW Hooligans. There is every possibility, nay – likelihood – that this creature will be taking bites out of the flesh of the unwary. He may seem mild and reasonable enough now, but when Dragon Con arrives, the madness of the Old Ones will overtake him and he will do everything he can to transform our favorite gathering into DAGON CON.
With any luck, though, the power of the DCW ring will contain him and only his opponents will lose blood and limbs to the monster known as Dagon of the Dead!
Side Note: If you watch Dagon's entrance in the below video, you can see the DCW Hooligans getting into it with DCW regular and asshole extraordinaire, Jack Wagon. Who also did a Q&A for me. It'll be up soon.
-Phantom