I decided after Heroes Con that I wanted to focus on costuming in my Dragon Con coverage this year. I knew I had one of the best costuming resources I could ask for amongst my friends, the DCW Hooligans. Up until now you have known her as Little Pond, but Sara Pope is actually a master costumer on both a hobby and professional level.


This lady is such serious business that one of her projects is going to be featured in the Dragon Con Costume Exhibit. One of the most impressive pieces Sara has made is a recreation of Pamdé Amidala’s funeral gown from Star Wars Episode III: Revenge of the Sith, which you can read about below. The Dragon Con Costuming Track will be displaying the cloak from this piece as part of their Costuming Exhibit.

So how’s that for hot stuff? Read on and discover more about one of costuming’s finest right here on Needless Things: 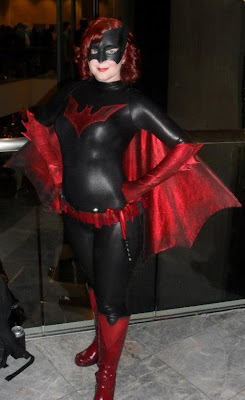 1) What are your top geek passions?
A) I’m a super sci-fi lit nerd, especially Ray Bradbury. I have a huge collection of 70’s paperback sci-fi books (because those have the best cover art). I also love comic books and more importantly, comic book discussions i.e. who would beat who in a fight, who would win a hotdog eating contest (the Flash, ask me and I’ll tell you why), who’s more creative: Kyle Rayner or Plasticman, etc. And Wampas. I love wampas. 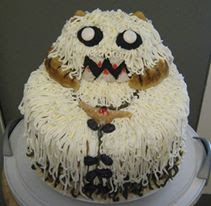 2) What was your favorite toy when you were a kid?
A) I was a My Little Pony girl myself, but I used to hang with the kid across the street and we would set up these elaborate scenarios involving GI Joes running around in the Ewok village while the Decepticons attacked, plus dinosaurs. So I guess the dinosaurs were my favorite toy.
3) What is one album everybody should own?
A) Oh man, that’s a tough one. I’m going to grudgingly settle on Physical Graffiti, by Led Zeppelin. Some of my favorite songs are on their other albums, but this one covers so much of what is good about them. Honestly, if you can’t appreciate Led Zeppelin, then you have no business owning albums in the first place. Second runner up is Paul’s Boutique by the Beastie Boys.
4) Who is your favorite wrestler and why?
A) Chip Motherfucking Day, of course. It’s the hair.
5) When and how did you discover you had a talent for costuming?
A) When I started making costumes is a very different time than when I had a talent for it! Honestly, it’s a skill, and just like any other skill it takes years of hard work to be good at it. I’ve been playing dress up since I was old enough to wrap a shawl around my waist and declare myself a princess and the first garment I made was a dress I cut out of a king size pillow case. So I guess I’ve been costuming my whole life, but I’ve only gotten any good at it over the past 15 years or so. In college I was introduced to the fantastic world of nerd conventions which, to me, translated into having an excuse to wear costumes more than once a year. I’ve always made everything myself and I rarely see the whole finished outfit before I put it on at the convention so it’s an exercise in faith in my own ability that has gotten more rewarding as I’ve improved over the years. I only know I’m decent at it because sometimes I’m satisfied with the end product.
6) What’s your costuming background?
A) Let’s see, I did some stage costuming in high school and college, some custom bridal design at a shop in Buckhead for a while, then I worked in the costume shop at Busch Gardens in Florida for several years, plus I’ve been making costumes for myself the whole time, so I guess I’ve been at this for about 17 years now. I have a BFA in textile design, which has really helped with some of those Star Wars replicas, and I’m on track to start work on my MFA next year.
7) If you could pursue any project, what would it be?
A) Ah, well, it’s no secret that I’ve been working on a Skeksi for years, so having the time and space to complete that one would be a dream.
8) What's a favorite con memory?
A) In 2002 I attended my second Dragon Con with my friend Mary. We had come the year before with a larger group, but this one was just the two of us and it was one of the best con weekends I’ve ever had. I think I actually even went to panels that year. I made friends there that ended up leading my life in a whole new direction and the ripple effect continues to this day. Not to mention, everyone there had way better costumes than me so I learned how much I needed to step up my game.
9) Which actor do you feel like you could sit and watch for hours no matter what they were doing and why?
A) Shia LaBeouf. SIKE! For real though, Harrison Ford never gets old for me, neither does Jeff Goldblum bless his nutty soul, and for the new kids, I’m going with Seth Rogan, I’m a sucker for curly hair and a sense of humor, and the dude just doesn’t take himself too seriously. Sorry James Franco, I still love you but you’re so damn weird!
10) What advice can you give to somebody just starting out making costumes?
A) Be prepared to learn constantly without ever reaching the end. Sewing and costuming has been around for centuries, you will never know all the right ways to do something and there will always be someone willing to teach you. Especially with the internet existing and all, you might not have to hack your way through it as blindly as I did back in the dark ages. Also, be creative, use what you have on hand, non traditional materials can lead to the most amazing costume creations.
11) Which costume did you learn the most from making?
A) Definitely Padme’s funeral gown. That outfit is entirely technique driven. I had learned most of it in school, but having to reverse engineer all the fabrics from photos was an adventure. The dress is hand pleated, smocked, and painted while the cloak is screenprinted velvet burnout that is then hand painted. The whole thing is topped off with aged sequins that had to be applied one by one. The biggest thing that outfit taught me was patience (and a few new expletives).
12) Is there a movie that should never be remade and if so which one?
A) When Harry Met Sally. It was perfect, the hair was perfect, the actors were perfect, everything was so wonderfully character focused. If they remade it today they would pick super hot teenie boppers who couldn’t carry a movie built entirely on the interaction between two people over several years. I would throw a tantrum if Gomez and Beiber were to shit on this one. 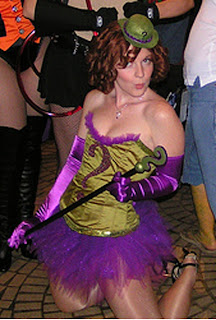 13) Closer – what is your favorite costume that you’ve worked on and the story behind it?
A) Oh Buddy, this is a toss up. Back in 2004 I made Teela from the (then) new Masters of the Universe. I built it out of so many bizarre things; the round pieces on the belt were repainted google eyes from plastic party glasses! My other favorite was the Riddler from Batman in 2006. I got to use all sorts of fun skills on that one; it had beading, tutus, props, and a hat! Plus we had a whole group of amazing costumers working together for the whole set of villains. In the end that is what it is really about for me, the designing is fun, the construction is fun, but I really do it just to have an excuse to hang out with all the amazing friends I’ve made through costuming over the years. It’s no fun if there isn’t someone there to appreciate all my hard work because they know how tough it is to sew the perfect welt pocket or appliqué on knit. Costuming for me has been a hobby, it’s been a job, but most of all it has been a path that has led me to having some of the coolest/nerdiest friends a girl could ask for. Plus dinosaurs. 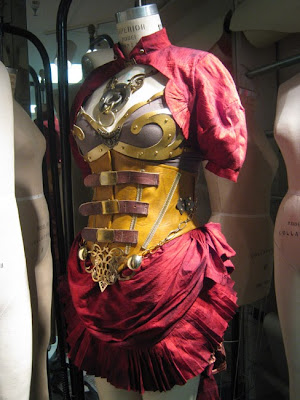 So, do you get it? Sara is not messing around when it comes to costumes. Keep an eye out for her Pamdé cloak in the Dragon Con Costume Exhibit and look for some new creations at Con.

And be sure to check back in tomorrow, as Needless Things has a chock-full schedule leading into Dragon Con this year. This is exciting stuff, Phantomaniacs!