The Troublemaker family first met cartoonist Jamie Cosley at HeroesCon a few years ago. I had decided that if we were going to be at an actual comic book convention we were going to get some sketches. I had a couple of names I wanted to approach, but I also wanted to be sure and talk to some folks I was unfamiliar with. Why waste such a perfect opportunity to expose myself to new people?
Wait – let me rephrase that.
With so many talented people on hand I felt like I really needed to explore the guest list. There could be plenty of people with styles that appealed to me that I might otherwise miss.
We saw Jamie Cosley’s table after stopping off for a conversation with the always pleasant Steve Niles. He had a small painting of Finn and Jake from Adventure Time that caught Lil’ Troublemaker’s eye. There were several other cartoon-oriented pieces that were clever and well done. The little sign at the front of his table listed an outrageously affordable price for sketches, so we stepped up.

Lil’ Troublemaker asked for Finn and Jake with Batman and Jamie produced this awesomeness: 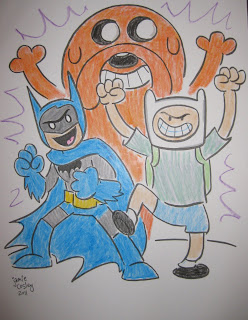 We also mentioned some difficulty we had been having getting anybody to draw a Scooby-Doo (apparently his is a difficult likeness to capture), and without even being asked he whipped this one up: 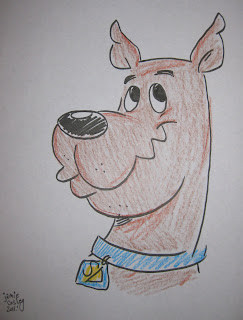 We stood and chatted for a while and just generally had a very nice time talking. Jamie is one of the most pleasant artists I have ever had the pleasure of meeting (and that’s coming directly after a conversation with Steve Niles) and he has a gentle humor that combines well with his desire to entertain. His cartoons are fun and whimsical and everything he does is family-oriented.
Jamie has a new project that he is working on now. You can check it out here:
Cody the Cavalier Potato Chips
And learn a little bit more about the guy with one of Needless Things’ handy 13 Questions!:

1) What are your top geek passions?
A) Watching old cartoons with my kids!  Introducing them to the Classics is very important to me :)  Hanna Barbera and Old School Looney Tunes
2) What was your favorite toy when you were a kid?
A) My Star Wars toys!  Oh and G.I. Joe and He-Man!  Can I have more than one?
3) What is one album everybody should own?
A) The Muppets soundtrack :)
4) Who is your favorite wrestler and why?
A) When I was little I liked Hillbilly Jim :)  not really sure why?
5) When and how did you discover you had a talent for creating?
A) My mom has drawings I did of Beetle Bailey when I was like 5 (I think it was of Otto the Sarge's dog:) so I've always been passionate about drawing and comics and cartoons.
6) What’s the deal with the (non)Kickstarter project?
A) They declined our project because we are relabeling an existing bag of chips - which apparently is a no-no.
7) Who or what have been major influences on you?
A) Hanna-Barbera cartoons, Children's books by Syd Hoff and Jack Kent and Hagar the Horrible comic strips!
8) What's a favorite con memory?
A) Skottie Young bought my son's graphic novel "Ninja Squirrel" and then drew him a sketch.  That was pretty spectacular.
9) Which actor do you feel like you could sit and watch for hours no matter what they were doing and why?
A) I really like RDJ - for Iron Man and Sherlock Holmes - two amazing characters and he plays them both brilliantly :)
10) What inspires you to do what you do?
A) I love to sing and draw and I've been blessed to be able to do both.  I lead Worship at a small church close to home and I illustrate children's books during the week.  God is good and it's a Good Life :)
11) What is something you cannot wait to see or have more of?
A) I'm really looking forward to the next Hobbit movie!  And there is a new movie with Ben Stiller that looks really good and apparently the movie was written by cartoonist James Thurber.
12) Is there a movie that should never be remade and if so which one?
A) I would kinda like to see a remake of "Butch Cassidy and the Sundance Kid" but I don't know if anyone could touch Redford or Newman :)
13) Closer – what are your recent projects and where can people see them?
A) All things Cody the Cavalier Potato Chips!  All the info is on the site!  Thanks again!!

Jamie’s a great guy doing a bunch of neat things. Go and check out his work and his project and see what you think!
Jamie Cosley on tumblr
-Phantom