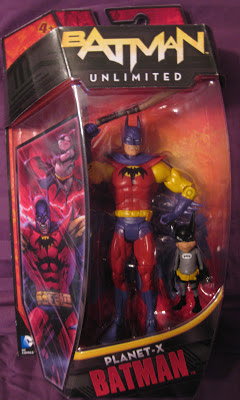 My love of Mattel’s DC products is definitely on the wane.
Heck, my love of anything DC is on the wane (except maybe Man of Steel).
Mattel’s retail line isn’t producing very much that’s exciting or new. And I think I regret subscribing to Clun Infinite Earths this year. Most of the releases so far have been so bland that I haven’t even wanted to review them. As a matter of fact, I just shipped Wally West off to an eBay buyer that I hope will like him more than I did. Well, technically I don’t care. I’ve got the money. It’s too late for him. Bwahahahaha!
I was fairly close to just divvying the rest of my DC figures up into lots and selling them off, as well. A couple of things stopped that. First, it would have been a pain in the ass. Second, Lil’ Troublemaker really didn’t want me to. He got bummed out when I told him I was thinking about it. Third, I know there would come a time when I would regret it. Yeah, it would have been a ton of money; but I know that someday DC will recover from the current creative disaster and I will love their universe again.
For right now I am just not that enthusiastic about DC. But – like any toy line I am considering dropping – there are still releases here and there that I just can’t resist. This Batman is one of them.
I had a tangential awareness of Zur-En-Arrh Batman before I read Grant Morrison’s excellent Batman: R.I.P., but no detailed knowledge. It was just kind of part of that amalgamation of zany Silver Age stuff. I knew about the rainbow suits and all that kind of craziness. Right now I can’t remember if I read R.I.P. first or saw the Batman: The Brave and the Bold episode first, but they are two entirely different representations of this Batman costume.

The Silver Age/Brave and the Bold version of this Batman presents him as a crime fighter who literally lives on another planet. I haven’t read the original comic, but in the B&TB episode he was essentially Kal-El as Batman because on his planet he has no powers. Earth’s Batman showed up on the planet and had Superman’s powers. It’s a great episode and a perfect example of how much fun that show is at its best.
In Grant Morrison’s story, Zur-En-Arrh Batman is actually an alternate personality that Bruce Wayne has created and submerged deep within his consciousness just in case he ever gets brainwashed to forget who he is. It was done as another example of Morrison’s favorite of Batman’s traits – that he is prepared for anything. Once Wayne’s memory was wiped, the Zur-En-Arrh personality emerged – accompanied by Bat-Mite, of all things – and created the wacky costume out of trash. This was also part of Morrison’s effort to incorporate the madness of the Silver Age into continuity.
Mattel – with this figure – has tried to incorporate both versions of this Batman into one figure.
It totally didn’t work. That’s not to say it’s a bad figure, it just is not a successful representation of both characters. 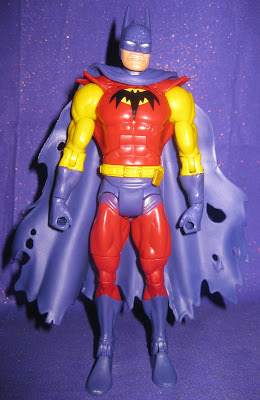 First Glance: This is obviously a striking figure. And in all honesty I bought it because I am a sucker for Batman figures. If one is an actual, different version of Batman I have to have it.
There’s no doubting this is the version from Morrison’s story – the stitching and torn cape indicate that. 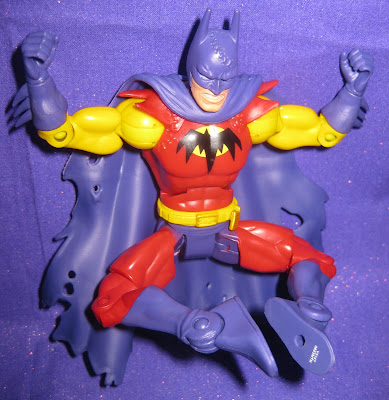 Articulation: Batman has the standard DCUC articulation. I think it was a good call for Mattel to stick with this through the line’s name change. While I do have some minor issues with it, I think a lot of folks might have stopped collecting if the line had changed too drastically. Also, Mattel wouldn’t have been able to continue using the same parts over and over and over and over… you get the idea.
Head – ball joint
Shoulders – swivel/pivot
Biceps - swivel
Elbows –pivot
Wrists – swivel
Abdomen – pivot
Waist - swivel
Hips – swivel/hinge
Thighs - swivel
Knees – pivot
Ankles - pivot
You have to play with the head a bit to get it to do anything.
Let me rephrase that.
You have to wiggle the cranium to get the full range of motion. Mine came somewhat stuck in place and it took some moving to loosen it up. I initially thought that it only moved from side-to-side, almost like a swivel joint. But it does move up and down a bit.
The rest of the joints function as well as any other DCUC figure. I have to say I am disappointed that Mattel has never attempted to deepen the pivots of the elbows, ankles, and knees of these figures. I understand that a double pivot doesn’t work for every character, but having a Batman – or twenty - that can’t squat is pretty annoying. 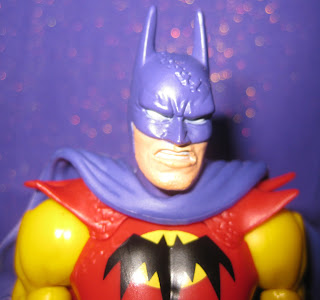 Sculpt: As with many figures that Mattel produces, this one could and should have consisted of entirely new parts. But there are a few new parts that work well and give the figure just enough newness to work. Kind of. The funny thing is that if they had just gone ahead and made this the Silver Age version they could have made it with less new parts and it would have actually been accurate.
This Batman has a new head, cape, torso, shoulder thingies, and belt.
The head is quite a bit different from typical Batman heads, as it has a very angry expression and some stitching to indicate that Bruce Wayne made this costume by hand. The stitching goes from the back of the head across the forehead and looks good, better than paint alone would have. His angry face is great! There's even some stubble sculpted into the jaw. My only issue with the head sculpt is that the left side of my figure’s cowl has some kind of abrasion: 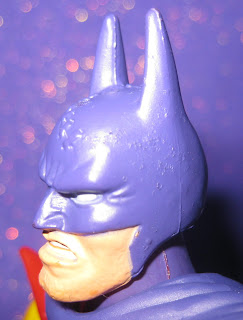 The upper torso is new, with some stitching and new shoulder pieces. The torso is pretty much the standard buck. It would have been nice if the Bat Symbol had been sculpted. I'm not sure why it isn't since this is a new piece. The shoulder pieces are a soft plastic and look pretty good, particularly the stitching. The seam between the shoulders and the chest is pretty ugly and noticeable.
The new cape is awesome. There is a big hole around the neck rather than the tightly fitted cape we are used to. The shape is very different from other Batman figures and there is plenty of damage and tearing. It’s a really good sculpt and I am impressed that it’s an all-new piece rather than a retooled existing cape.
The utility belt has some sculpting on it, but is pretty much just a belt with a cell phone stuck to it. This is not a complaint. That’s what this Batman’s belt should be. 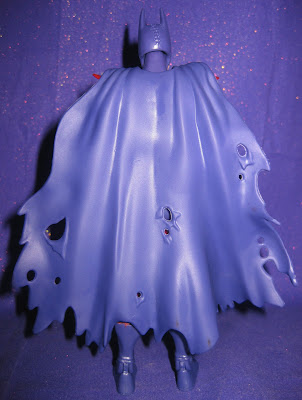 Coloring: The fact that the stitching is not painted is totally lame and makes this look like an old-school Ninja Turtles figure. Actually, even the new Ninja Turtles figures are suffering from lame paint jobs. It bothers me to no end that Mattel would put so much effort into certain parts of this figure and scrimp on others. A good paint job would have made all the difference.
The paint on Batman’s face isn’t great, as the flesh tone is a bit thin and while his teeth are painted, what is behind them isn’t. It’s flesh tone rather than black. A bit of a wash over his stubble would have made a big difference, as well.
The rest of the color on the figure works fairly well. I’m impressed that Mattel managed to match all of the yellows on this figure to one another despite the varying plastics used. The Bat Symbol looks good and tight. The utility belt has some metallic gold detailing and the attached cell phone does as well, though I think I would have preferred it if that had an entirely different paint job. 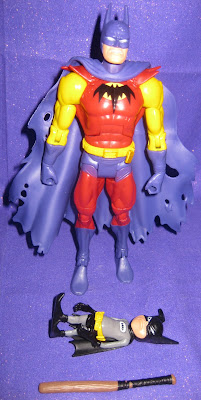 Accessories: This Batman comes with two accessories! Excuse me while I celebrate.
Okay, this guy comes with a bat (of the variety you hit baseballs with, not the ones that fly and turn into Draculas) and Bat-Mite. 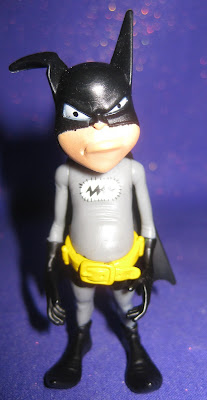 Bat-Mite looks great. He is a repaint of the one that came with the K-Mart Exclusive Silver Age Batman from a couple of years ago, but with a different head. This one has a different facial expression that is best described as “petulant”. I can understand reusing this sculpt, though it doesn’t match Bat-Mite’s appearance in Morrison’s story. It’s a good sculpt and is obviously the Dark Mite. 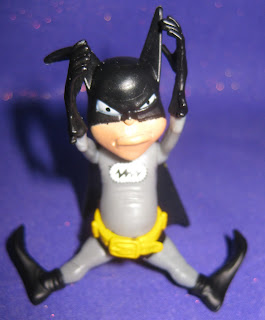 He has swivel joints at the neck, shoulders, and hips; not to shabby at all.

The bat is stupid. Going back to my comparison with original TMNT figures, it’s all bent up. How? What would do that to a bat? It’s dumb. The paint job looks nice, though. 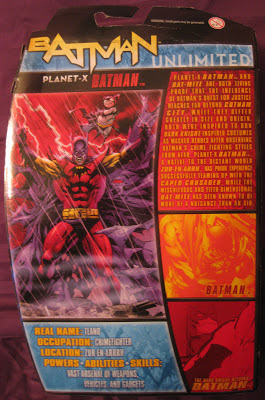 Packaging: The same overwrought blister card we’ve been getting since the Batman Legacy figures came out. It looks good, but is it really necessary? There’s a bio and some stats on the back: 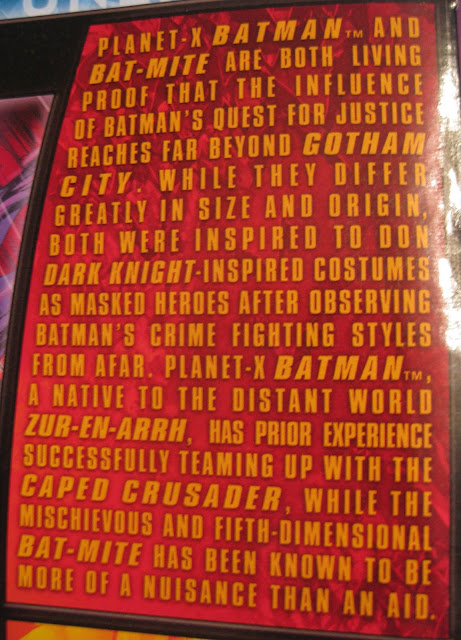 This is simply not the correct biography for this figure. At all. 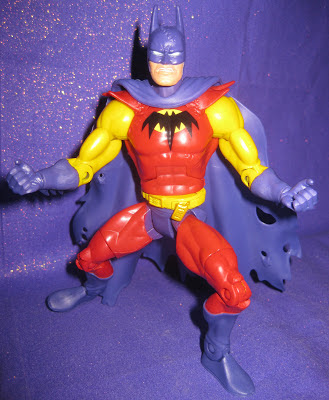 Value: $15.99 is actually okay for a 6” figure, particularly one from Mattel that includes two accessories. 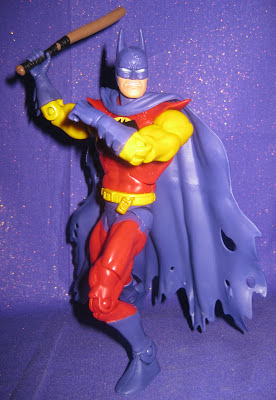 Overall: How do I rate this thing? If I actually look at it as a figure of Batman from Planet X – as it is labeled - it is a dismal failure. But looking at it as Bruce Wayne’s submerged Zur-En-Arrh personality from Morrison changes things significantly. It still isn’t outstanding due to a deficiency in paint apps and a couple of other small issues, but it works.

In the end it’s just really frustrating that this figure is half good decisions and half bad ones. If Mattel wasn’t willing to invest enough to get this figure right, I would rather they have just released an actual Planet X Batman. Actually, I think I might have preferred that anyway. 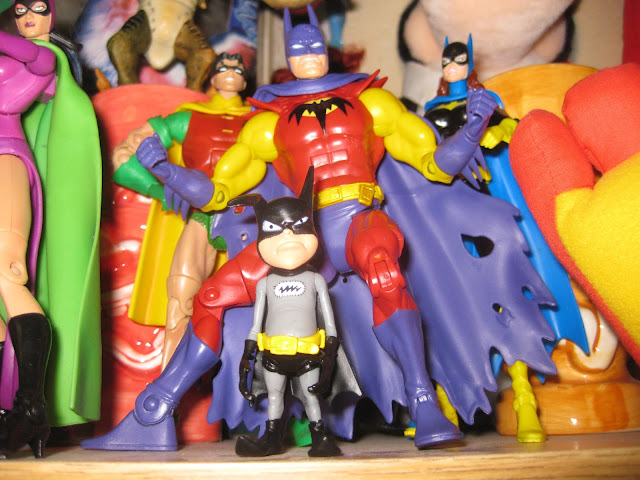