I am fresh off of my first major event since The Illness took me and I’m feeling pretty great, despite the fact that I am at work.
I was sweating last night’s Monstrosity Championship Wrestling show more than any I have since the first one. I’ve been sick for nearly a month now and have only been feeling for-real better for about a week. I don’t want to recount the whole story because that’s not why I’m here today (and who cares, really), but after multiple trips to various doctors I ended up on cephalexin (antibiotic) and prednisone (steroid). I have decided I will refuse azithromyacin in the future if it is prescribed because it seems to do jack-shit for me.
Side Note: During the conversation I had with the most recent doctor, Keflex and placebos came up. These are both things that were defined early in my life by the writing of Stephen King and I’d like to take just a minute to point out that Mr. King is probably responsible for more of my vocabulary expansion than any other single entity; including – unsurprisingly – the United States public school system. Bonus points to the Phantomaniac that can guess in which books the relevant terms were introduced to a young Troublemaker.

I finished up my steroids a couple of days ago, but still have plenty of antibiotics left to go. Thanks to the longevity of my illness I have been nervous about doing anything that might exacerbate the illness. I need to get better, and soon. I have a life to get back to and the longer I have to put things off, the less I am going to be able to do over the next couple of months. And the next couple of months are going to be – and need to be – busy. I’m building an empire here, people. And part of that empire involves hosting Monstrosity Championship Wrestling.
After the work schedule scare I had last month (where it seemed I might have to drop MCW completely), there was no way I was going to miss Friday night’s show. Not only is it very important to me to be at every regular in-house show (the ones at Club Famous – I just have to accept that the one-off shows tend to fall on days I have to work), this show was also The Casket Creatures’ album release party.
But I felt pretty good and made it out and had a great time. I had intended to bring the remainder of my Needless Things t-shirts:

to sell (“remainder” meaning all of them since not a one sold at TimeGate), but I decided to not get overly ambitious. If I could just make it through the night and do a good job I’d be happy. I didn’t want to have any extraneous bullshit to deal with.

I had a blast working with Hollywood and Professor Morté and received a lot of positive feedback about my performance. It was great to have people notice a couple of specific little character things I did; and it was even better to know that there had actually been come concern about my ability to continue with the promotion. After the show a couple of the boys asked me about my situation and made it clear they thought I was a valuable part of MCW. That was awesome on two levels – first it meant that they appreciate what I’ve been doing in the ring and the fact that I am even able to use the phrase “what I’ve been doing in the ring” is a thrill; let alone that people dig it. Second it means that they’re reading Needless Things. And if you’re reading Needless Things that makes you one of the very best people on the planet.
And if you are really and truly one of the very best people on the planet, then you are not going to want to miss
17-13-2013
Needless Things Podcast Episode 6: LIVE from Odin’s Cosmic Bookshelf
Featuring
An Artistic Exhibition
By
The Belligerent Monkey
And
A Personal Appearance and Book Signing
By
2013 Pulp Ark Award Winner Bobby Nash

That’s right, Phantomaniacs – I will be hosting the next episode of the Needless Things Podcast LIVE and in person from Odin’s Comics, located in scenic Lilburn, GA. I will be joined by my official co-host Mr. Beau Brown, as well as artist Jay Hornsby (known to Needless Things enthusiasts as The Belligerent Monkey) and writer Bobby Nash (known to me as The Conscience of ESO). We’ll be talking about how we all got into our various arenas of dorkery, as well as discussing the current state of DC Comics and their various media branches. 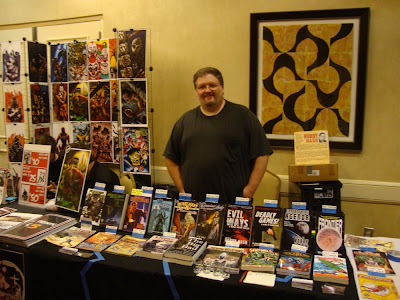 I am SUPER EXCITED about this thing. Since hosting MCW and appearing on various panels over the past couple of years, I have discovered within myself a need to interact with and perform in front of people. I love it. And the panel format is the ideal situation in which to do it. There are multiple guests, a set topic, and audience interaction is feasible and can be controlled. Everybody gets a little something out of it. Combine all of that with my desire to keep the Needless Things Podcast on some kind of regular schedule (even if it is only monthly) and this all seems to make good sense.
I suppose we won’t know for sure if I’m right until after Saturday.
The greatest thing about all of this is that the idea came from Mrs. Troublemaker. From the venue to the format; she is the one behind this. Technically she’s the one behind pretty much everything that I do, as it was her prompting that got me to talk to Bobby Nash (and as a result the rest of the ESO Network) in the first place.
The party kicks off at 2 PM with Monkey and Bobby signing and selling. There will also be a Nerd Sale in the Odin’s parking lot if weather permits. Various folks will have tables of all kinds of wares available for sale at rock-bottom prices. I plan on having a ton of older, loose toys that I just don’t have room for anymore.
This Saturday is certain to be an entertaining experience for all in attendance. I’m sure I’m going to learn a lot about running a live show. No doubt there are things that I am not even considering right now, and if you’re there you’ll get the privilege of seeing me deal with them firsthand!
To close this thing out, here are some of my favorite examples of Monkey's art:

Email ThisBlogThis!Share to TwitterShare to FacebookShare to Pinterest
Labels: life the universe and everything, Needless Things Podcast, tales from the troublemaker