Best Cartoon Ever (of the Month) – Dino-Riders by Kalan

Hey Phantomaniacs! It’s time for an all-new feature from Kalan. I enjoyed her review of The Naked Man quite a bit, so I told her if she ever wanted to write again I’d be happy to post it.
Luckily for all of us, that led to this – Best Cartoon Ever (of the month).
I like to think of myself as a bit of a cartoon aficionado. 80s cartoons, anyway. As a matter of fact I was just a guest on a RevCast episode about 80s cartoons. But I do not know cartoons like Kalan knows cartoons. I don’t know that I’ve ever even met anybody with a collection quite like hers. She once sent me a list of what she has – looking to trade and fill in some spots – and I didn’t have anything she needed. I didn’t even respond for a while because I was embarrassed that I had been outdone so badly.

So Kalan watches all of these cartoons and ponders them and is now going to be writing about them once a month for Needless Things. Which is awesome.
The first entry is about Dino-Riders, which came in just before I started hiding my toy hobby from the general public. I had a bunch of the toys and to this day I think they were some of the best I ever owned. Even now Mattel has what basically amounts to Dino-Riders in its Imaginext line and Lil’ Troublemaker has every single one of them.
Anyway, you’re not here to listen to me talk. Here’s Kalan:

Dinosaurs (AND dudes riding those dinosaurs), spaceships, laser armor, time-travel, evil Frog overlord – Dino-Riders was a 30 minute toy commercial that had A LOT going for it, which is why it is the inaugural pick for Best Cartoon Ever (of the Month). The show had a short run - lasting only 14 episodes in the fall of 1988 - and was a concept series for Tyco to push their new toy line. It was part of Marvel Action Universe, airing alongside the Robocop animated series.
The series follows the Valorians (good guys) and the Rulons (bad guys) in their adventures adapting to life in Prehistoric times on Earth. The Valorians were attempting to escape the Rulons but as they entered warp speed with their Space Time Energy Projector (S.T.E.P.) crystal, the Rulons locked on with a tractor beam so both parties were zapped through space and time and here we are. The show pays pretty close attention to using the “correct” names of less-commonly known dinosaurs – like the Torosaurus - which I'm sure kids never really noticed, but I do and it is a nice touch. Despite being stranded in a strange place and time, it doesn't take long for either party to come to the wicked awesome conclusion of “hey, there's some dinosaurs....lets ride 'em!” 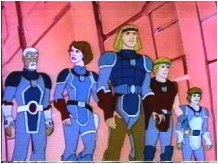 Valorians – Mind-Zei, Serena, Questar, Yungstar, and Llahd as they step off their ship and see dinosaurs for the first time


The main reason this show is the Best Cartoon Ever (of the Month) is actually three reasons – Frank Welker, Peter Cullen and Charlie Adler voice the majority of the main characters. It will be apparent through the development of this series that I have a pretty serious obsession with Frank Welker, so just settle in - it's an enjoyable trip. For Dino-Riders, he provides the voice of Krulos, Rasp, and Glyde as well as some additional voices – I am pretty sure he does a lot of the dinosaur sounds as well; he's pretty good at that. Krulos provides ample opportunity for Welker to max out on the evil villain laughs and then some. It is more than just a little exciting for me; unfortunately, how badass he is does not translate well from the cartoon to an internet review without going off on a tangent, and let's face it - the internetz has more than enough of that. You'll just have to take my word for it that you'll enjoy the hell out of this character and voice acting. Making Rasp one of the main second-in-commands to Krulos provides a lot of Welker-on-Welker action, and that just makes me love the show even more. Rasp is constantly trying to usurp command, so there is some good back-and-forth between those two and he gets a lot of opportunities to mumble some good comebacks when Krulos' plans backfire. Cullen voices good guys Gunnur and Bomba and one bad guy with Antor - who gets little action - and Adler brought Lokus and Hammerhead to life. While Hammerhead gets some pretty choice dialog, Antor is relatively forgettable. They are competitive with Rasp but loyal to Krulos and constantly try to one-up each other for the favor of their leader which adds some decent side stories to each episode. The competition is usually who can find the best specimen of the neatest kind of dinosaur or who can acquire the largest quantity at one time. Basically, “Na na na boo boo, I got better lizards than you!” 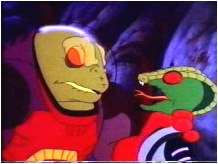 
The Valorians have the classic good-guys-protecting-the-environment thing going for them, among other things. Which is pretty endearing and whathaveyou. I'm sure if they had made it to the 1990s they would have made a big contribution to the “cut your 6-pack plastic so stupid-ass fish don't die” campaign. They follow fairly outright in the footsteps of G.I. Joe characters, in a good way; they're even animated similarly. They've got some pretty serious firepower backing them, occasionally harnessing the S.T.E.P. Crystal for an additional boost. I'm not sure how they did it (well, I mean, they're the good guys, so who am I to question it), but somehow their lasers never hurt opposing dinosaurs, they just get awfully startled and run away, strangely able to ignore the Rulons' mind-control brain boxes on their heads. Valorians use their AMP (telepathic) amulets to communicate with one another and the dinosaurs they befriend (or enslave, however you want to go about it considering the dinosaurs do the majority of the building/rebuilding of the Valorian encampment every time Krulos or a natural disaster destroys it).
The Valorians and the Rulons are pretty well-organized when it comes to the division of labor and specialties. The ships that brought them were relatively massive compared to the “norm” for cartoon space vehicles. The Valorian vessel is supposed to have carried 400 of their people from the homeworld when Krulos attacked aboard the Dreadlock (the Rulon ship - awesome name) which was nearly twice the size of the Valorian vessel and also contained a rather large Rulon humanoid population. The main Valorians are high-to-mid ranking military officials, each with their own strengths that contribute to their being relatively useful. The Valorians have within their ranks the Commandos, a group of military elite that have a tendency to take matters into their own hands. The Rulons are divided primarily based on humanoid species – Rasp leads the Vipers (snake men), Hammerhead leads the Sharkmen, and Antor leads the Antmen, shockingly creative... I know. It can get somewhat confusing in battle scenes. Basically, if the Vipers are attacking, for example, there are 30 Rasps on screen, there is nothing to distinguish them amongst themselves. It doesn't change the outcome of those battle scenes, it was just an opportunity to only have to animate a few snakes getting laser blasted off their steeds instead of a bunch of different ones.


As per usual, the bad guys have the cooler equipment to carry out their evil plans. While the Valorians have those neato AMP necklaces, it just doesn't hold a candle to Krulos' brain boxes. Why get a dinosaur's cooperation willingly when you can forcefully strap on a mind-control device? I mean, sure it's pretty labor intensive, having to set traps for gigantic lizards, and finding the materials to build them in prehistoric Earth probably would have been difficult (unless part of the Dreadlock’s bill of lading was 10,000 brain boxes, which in that case, kudos to Krulos for thinking ahead) but what else are your minions going to do? The Valorians have some pretty heavy firepower outfitting their dinos - especially after acquiring the Brontosaurus - but on an individual basis, for me, Krulos again takes the cake – his steed is a T-Rex. While it doesn't pack the Bronto's Pulse Cannon, it's a freakin' T-Rex! It's outfitted with leg armor that has two buzz saws that can cut down trees, extendable death-grip claws (that send me into fits of laughter because they're right under the T-Rex's arms – yeah... there is just something thoroughly amusing about a T-Rex that could do a push-up), and Gatling gun laser cannons mounted on its shoulders that can explode mountains. As addressed by Krulos and Rasp upon observing a T-Rex family enjoying a day in a valley: 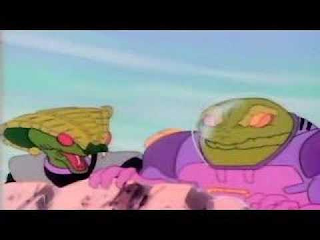 I have re-watched this scene so many times and it is still hilarious. It is one of my favorite interactions between these two guys and can be found in the sixth episode “T-Rex”. Shortly after this scene, as Krulos delves a little deeper into his plan we are rewarded with a dual evil Welker laugh from Rasp and Krulos. What a primo plan it is, too – dropping the baby T-Rex into the Valorian camp so the parents will destroy it. That's thinking outside the (brain-)box! Most definitely one of the many reasons he was the ruler of an evil empire that spanned the universe. It's not that I'm a fan-boy (fan-girl?) for all-things-Krulos, I'm just sayin', if you were in the same situation, would you go for some lame-brain ankylosaurus or would you have the balls to go after a family of T-Rex? Exactly.

If I was outfitted with some laser cannons, I'd be smiling like this dude too.


I've watched the show almost constantly for about a week now, prior to even thinking about writing for the Masked One, and it just doesn't get old. There is always something hilariously kick-ass and new that I catch. I love how bad I want (dare I say, NEED) the toys for this show every time I watch it. To me that's always a good judge of the effectiveness of writing/animating/character creation. There is a short Wiki on the series that goes into more detail, but just do yourself a favor and get your hands on the episodes. Dino-Riders is the most definitely the Best Cartoon Ever (of the Month).
-Kalan
Posted by Phantom Troublemaker at 11:00:00 AM

Email ThisBlogThis!Share to TwitterShare to FacebookShare to Pinterest
Labels: Best Cartoon Ever (of the Month), cartoons, dinosaurs, Kalan