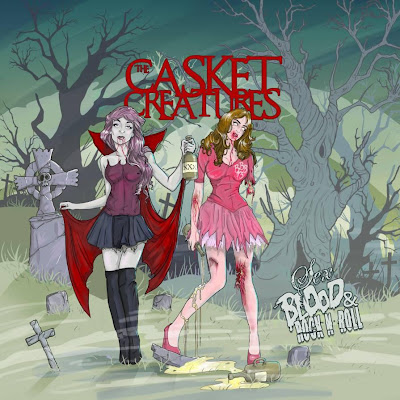 I’ve been following The Casket Creatures since I first saw them open for the Tone Deaf Pig-Dogs in 2010. I love their live act and have enjoyed every opportunity I’ve had to see the guys perform.

I got a copy of their first release – Tales From the Unknown – the first night I saw them play. The production on that one is a little rough, but also beyond what I expected from a local band I had never heard of. And the quality of the music itself was unquestionable. The guys have a talent for fun, accessible horror rock that urges you to just listen to the whole album. My initial reaction was, “Oh, crap – this guy can actually sing”. The Casket Creatures don’t just put a few catchy tunes on an album, they create a full force experience that drives you through to the final track. Tales From the Unknown was immediately put into my regular rotation.
I know that album well now and “Bad 2 Hearse” (what are you guys, Prince?) and “Sweet Screams” have grown into a couple of my favorite horror rock tracks.
But you never know what a band’s new album is going to be like. The production will change, the band might find a new direction, the spark might not be there anymore – there are all kinds of things that can prevent a release from being as favored as the ones you are already familiar with (though that familiarity often plays a strong role, as well). When I heard the Casket Creatures were working on a new album I was excited in a reserved sort of way. I wanted it to be as good as (or better than) Tales, but I had also gotten to know a couple of the guys and if it sucked I was going to have to tell them.

Fortunately, not only does Sex, Blood, & Rock N Roll not suck, it is a massive improvement over Tales From the Unknown in every way. That’s not to say that the tone has changed or the indie spirit of the rock is any different, but everything about the band has grown and improved, from Eddie Cadaver’s vocals to the instrumentation to the production (most noticeably the production).
The opening track “Bats, Blood, and Bitches” is ripping, powerful, and silly; and I mean that in the nicest way possible. The Casket Creatures are no shoe-gazing, angry death-metal group. They are making music because it’s a rad thing to do. They’re having fun. And the opening track tells you everything you need to know about them.
Just to run down some of the more standout tracks:
“Lizzie’s Song” strikes me a as very 80s for some reason. I can totally hear it playing in that scene in the horror flick where the doomed teenagers are driving around looking for somewhere to party.
“Curse of the Mummy’s Tomb” comes with one of the most awesome videos ever:

And reminds me a lot of Michale Graves-era Misfits.
About the last thing I expected out of this album was a duet with a lady singer, but that’s exactly what “Black Widow Bride” is. I’m not familiar with guest vo-kill-ist Jenny Dunn, but she has a great voice and compliments Cadaver quite well. It’s the punk rock version of Ozzy and Lita. Great track and possibly my favorite on the album.
The Casket Creatures have a tradition of doing a cover of “Halloween” at their shows, and while I’m not suggesting they should stop that, they now have their own very good Halloween anthem. “Devil’s Day” isn’t derivative of any other Halloween songs I’ve heard, but still evokes the holiday even without the lyrics (though a lot of the Creatures’ stuff does that). I could definitely see this one leading directly into the “Halloween” cover at a live show.
“B-Movie Massacre” is janother good, fun song. If “Black Widow Bride” weren’t so good this one would be my favorite.
Those are just the tracks that immediately stuck out to me the first time I played the album. The ones that had a life all their own. But the whole album is full of fun stuff. There isn’t a single track that I’ve skipped in the many times I’ve listened. As a whole, “Sex, Blood, & Rock N Roll” is a total horror rock success. If you are a fan or collector of that special brand of rock that includes The Misfits, Alucard, Calabrese, Balzac, and Michale Graves then you need to own this release. It’ll go into your Halloween playlist immediately.
Speaking of immediately, you can see The Casket Creatures LIVE tonight at the official album Sex, Blood, & Rock N Roll album release party, which also happens to be
Monstrosity Championship Wrestling’s
Great American Monster Mash
Hosted by yours truly, Phantom Troublemaker!

That’s right, Phantomaniacs – not only can you witness the deranged rock prowess of The Casket Creatures LIVE and IN PERSON, in the very same venue you can watch me tame an unruly crowd there to witness the Titans of Terror battle the Masters of Monstrosity!

The Undead Luchador Supernatural is one up on the DemiGod Mason - see if the DemiGod can balance that dark debt!

It's gonna be eyeballs-to-the-wall madness and mayhem in the squared circle and you do not want to miss it!

The action starts at 9 PM at Club Famous!